A while back, I made some notes on the waveforms from the NIM. I think the clock frequency changed with the symbol rate, but I don't think it was proportional. I'll check that again. 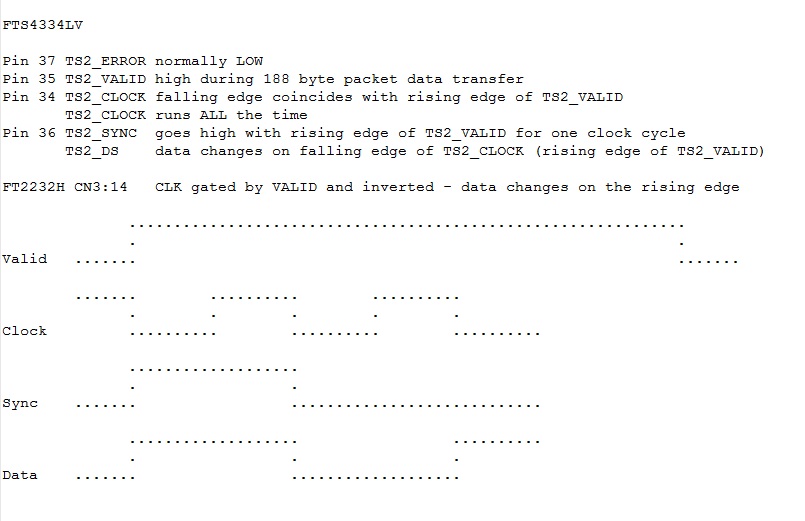 G8GTZ: Definitely use both channels on the NIM. I'm sure Heather can advise. The second NIM is for 2 more channels.

G0MJW: I've had a look at the MCP23S17. I haven't figured out yet if it has buffering. The NIM is effectively a master device, so you have to be ready to accept what it gives.

YL2AKC: I got the chips confused there somehow. Can you tell which pins on the RPi are being used to interface to the TV Hat?

I think we should investigate NIM serial mode. If that works, then there's no need for any interface hardware. SPI slave mode on the RPi should be fine.

MCP23S17 not buffering, it is a way to convert parallel 8 bit to SPI. MCP is SPI slave, so no problems with RPi SPI programming. I don't thing that FIFO is necessary for this setup. DMA+SPI hardware will handle data rates. As alternative is 74HC597, but with higer speed.

Regarding FIFO, why not to use something like this: CY7C130-55PC or This FIFO
More practical is to solder FPGA/CPLD and don't mess with FIFO memory.

g0mjw wrote: ↑
Thu May 21, 2020 12:20 pm
I already have a Kicad PCB design so getting the NIM in the right place is not difficult. It more depends on what other components are needed and how it connects to the PI. It would make sense for the board to power the PI perhaps but I am not sure it would work as a hat as the PI needs active cooling and a board sitting on top would interfere with that. Perhaps a side by side approach and connection cable might be better. It would also minimise the height with the vertical NIM.

It would be good it someone could test the serial mode first. If it's possible it greatly simplifies the hardware.

Thank you, This is great news.

I attached some ideas regarding NIM placement. Sorry I don't have any drawing experience. Take these drawing with some grain of salt.

G4EWJ wrote: ↑
Thu May 21, 2020 12:32 pm
A while back, I made some notes on the waveforms from the NIM. I think the clock frequency changed with the symbol rate, but I don't think it was proportional. I'll check that again.

NIM TS serial out have two modes:
1) Constant CLK and Valid pin tells to use or ignone current clk pulse.
2) Variable CLK and Valid pin do the same. CLK is comparable with TS bit rate, but sometimes can be slower to resynchronise with STV910 internal FIFO.

I seem to have the missed the rather awkward point that RPi SPI ports do not operate in slave mode. Unless the NIM can be persuaded to operate as an SPI slave, directly connecting the NIM to the RPi SPI ports is not going to work. It may be possible to use the RPi PCM input to accept the NIM SPI output.

In the meantime, it looks like you can make the NIM operate as an SPI master by changing 2 configuration registers.

This inverts the VALID signal to active low, which is the norm for an SPI SS/CE enable input.

There is also an RSTV0910_P1_TSCFGH register, so make sure you get the correct one.

CTRL-X and Y to save and exit

make (there will be a few warnings from the compiler)

The serial data comes out of both D0 and D7 on the NIM. I haven't connected it to anything yet, but I can see the 0x47 packet start byte on the scope.

The clock still runs continuously, but I don't think that will be a problem for an SPI port.

Longmynd won't display video anymore of course, but you should get the text info box, although sometimes it says Found Headers, but doesn't display the info.

I repeated the kernel module latency test on a Portsdown displaying an SR1000 transmission on the small screen and it varied from 2 to 12us, so I think that an interrupt based solution would still be risky.

G4EWJ wrote: ↑
Thu May 21, 2020 6:01 pm
I repeated the kernel module latency test on a Portsdown displaying an SR1000 transmission on the small screen and it varied from 2 to 12us, so I think that an interrupt based solution would still be risky.

So you thing interrupt+GPIO is dead end? 2 uS latency mean 500 kBytes/s. That is 4 MBit/s for TS. Beacon transport stream rate is ~2.4 MBit/s. Should work for version 0.1 (alpha). On future I am planning to use DMA+parallel GPIO. This must boost data rates to electrical GPIO limits.

PS: didn't make anything for project on Thursday. Tody I'll try to work on kernel module.

Hi Brian,
Those measurements are useful, it might just work but ideally we would need a bigger buffer. You can chain those I mentioned but once you start having 4 of them on a board other devices and methods start to look more appealing.

Looking at the SPI on the Pi it looks like it need 32bit words for DMA use and it has a fairly limited set of bitrates so we are unlikely to be able to match the in and out bitrates of the NIM and the Pi closely for lots of symbol rates. Whatever the intermediate device is it is going to need a reasonably sized buffer and a way to gate the Pi to read from it by whichever method so that the Pi never drains the buffer and never lets it fill completely.

As mainly a software person my knowledge of what devices out out there is rather poor, but I did think that programming devices does add an extra level of homebrew complexity which might be nice to avoid if possible.

>>So you thing interrupt+GPIO is dead end?

I think it's an unknown situation. Based on that last test, you would have to assume 12us and then allow more time to actually input and process the data. If you allow 16us, then you're down to about 60k bytes/s, 480k bits/s, which is barely enough for SR250, for single byte input.

With the 74HCT40105 16 element fifo, that would allow SR4000, but you never know if circumstances will occur which delay the interrupt past 12us and how often that may happen.

Here's the kernel module. It's basically the example from the web site I mentioned above. Latency is best when the cpu is running at maximum speed. I just have a program that loops forever to engage maximum speed.
.

.
There are instructions in the C file. I have a program to generate a square wave on GPIO4, if you need that.