I will be operating from Lulworth Ranges in Dorset on Saturday (IO80WP) and from Okeford Hill (5 miles West of Blandford Forum IO80UV) in Dorset on Sunday.

Limited to lightweight kit I could be on Dunstable Downs both days with 5Ghz; a first proper outing with the 8 Watt Ferranti PA.

If I can find a helper maybe 2 metres.

So I have decided Sunday I will be on Dunstable Downs; most likely by 10.00am. At the moment I can only do 5GHz so it might be a quiet day; I will take a book to read.

The Grimsby team will be operating G7KPM from Caistor Lincolnshire IO93UM

On Sunday morning I will be operating from the west face of Cleeve common IO81XW with good takeoff to Bristol/Exmoor.

On Saturday, after my GB19CW operating stint ends, I am going to investigate a site with a takeoff east from the Cotswolds at IO91BX82

Saturday is looking a bit wet here but I can do Sunday morning IO74CO or nearby with 2m digital or 6cm analogue if there's anyone local with it. I''ll have Zello and can be on 144.750.

5.8GHz FM and 3.4DATV from IO91XG Woldingham Surrey Saturday only no takeoff to the North but WSE all OK, I hope....STC I can get above the chain link fencing.
Gareth
Top

I will be on giving points away Sat and Sun from time to time.
23, 13, 6, and 3cm FM 9cm digital.
Full of cold so not in shack most of the time but will have Zello on ATV North East and Zello GB3KM
if anyone wants to try

Well, that was a weekend of mixed fortunes!

On Saturday I went to Walbury Hill near Newbury (IO91GI) where it was blowing a gale but dry.
The highlight was working David M0YDH on Clee Hill in Shropshire on 70cms. The lowlights were not working G8GKQ on 146, 3.4 and 5.6 due to equipment failures and not managing a QSO on 10Ghz as I could not hold the dish steady enough in the wind! Also failed to work Gareth G4XAT on 5.6Ghz over an optimistic path from south London but I did see a drone on 5665MHz so I knew the gear was working!

I then drove 120 miles down to Dunkery Beacon near Minehead where both the weather and QSO success rate was much better!
The highlight was working Dave G4FRE on Clee Common near Cheltenham on 5.6 and 24GHz. At 136.8Km this is a new 24GHz DATV world record!
I also worked G4KLB/P in the KLB radio car, G8GKQ and G8BVK on multiple bands and Adrian G4UVZ on 10GHz over a very obstructed path.

Again, dissapointed by the lack of stations on the air - I can name at least 10 stations who were within range on the 2 days I was out. What do we have to do to encourage people to get on air - it really is true, we will loose it if you don't use it

Not expecting to do as well as last year but overall an enjoyable weekend and the lesson learnt was less time looking at Oscar 100 and more time prepping for the contest would have helped! 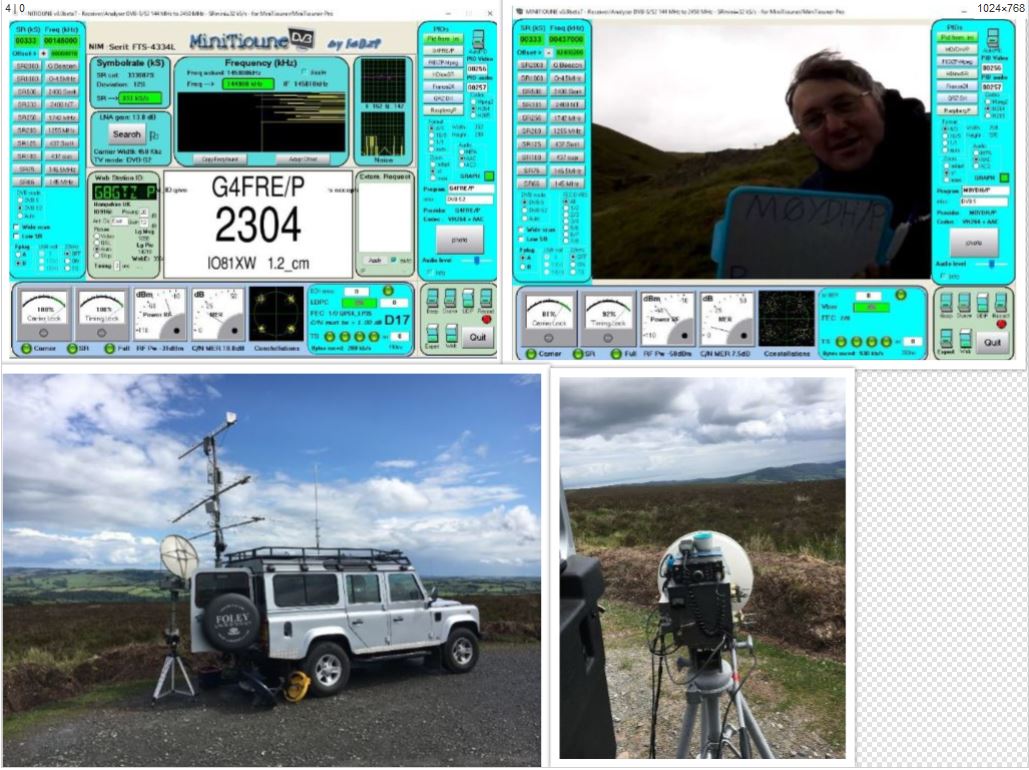