This is now available on G8AJN's site at http://www.g8ajn.tv/dlsoftware1.html Click the red box.

Make sure you get the zip file named DigiLite Software v2-50beta Release D. It contains the latest instructions in DigiLite UDP v2-50 Setup v20.pdf in the Instructions folder.

Also in the Instructions folder is DigiLite Serialiser FT2232H USB Module Installation v9.pdf, which you may need if you plan to connect two DigiLite boards to the PC at the same time. If you don't plan on connecting two DigiLites simultaneously, then you can ignore this document.

This is a beta release. I'd really like to do some more work on it, particularly with the new low symbol rates, but I haven't been able to give it as much time as I would have liked. Please report any bugs in the software or documentation.

UDP is a networking protocol. DigiLite Transmit v2 can accept UDP data in program stream or transport stream format, which removes the need for writing to disk or using GB-PVR. Several utilities can provide this and one called GraphEdit is used in the examples. This is more of a techy tool, but not too complicated. Using a network interface means that the PVR-150 and DigiLite can be on separate PC's. UDP can be used within a single PC, even if it doesn't have a network card.

If you don't need UDP operation, then there's no need to upgrade, although you might find it useful that DigiLite Config v2 can have several different selectable configurations.

DigiLite v2 contains all the features of DigiLite v1.

Thanks to all who helped with the testing.

If you're trying the graph with the video display window, there are other video renderer filters in DirectShow filters if the Haali Video Renderer is not present.

I tried putting it on the old laptop that runs the DigiLite at the local club. It's a very minimal Windows installation and the Haali filter wasn't there. I tried downloading it and I also tried the other video renderer filters, but I couldn't get a video display. GBPVR complains that the video hardware is too old for it to run, so maybe that's the reason.

Hi Brian;
This new version is very interesting, many congratulations to you, as we say here: "usted es un cerebrito" . For my digilite transmission system, I use a PC compatible with Celeron microprocessor speed of 2.4 GHz, 1 GB RAM and 80 GB hard drive, with the task manager WXP use is 18%, including a small video window renderer, it's nice not having to write to the hard drive, I can use an old 20Gb hard drive that I have only saved. The "no audio" option is interesting for low SR, I have a question a little off topic, can Digilite only transmit audio ? like a satellite radio.
Best Regards
Josue
OA5ATV 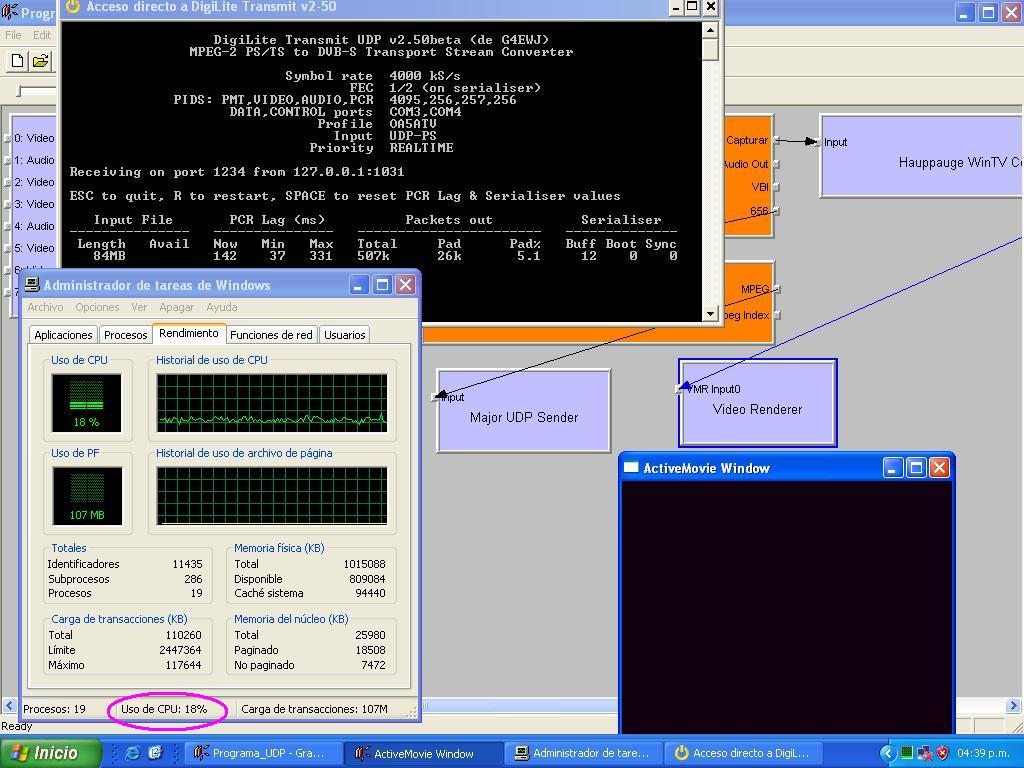 I thought 'celebrity' sounded quite good, until I put the whole phrase into Google Translate and it came back with "you are a nerd".

>>can Digilite only transmit audio ? like a satellite radio.

I'm not certain what you're asking there. Can you explain please.

Yes, that is possible, with development.

It could be done by having more than one audio stream associated with one channel, like multiple languages on DVD. There is a button on the receiver remote control to select the audio stream.

It could also be done by having each audio stream defined as 'radio' and then each one would appear as a separate channel.

At the moment I'm working on using the PC microphone for DigiLite audio instead of (or as well as) the PVR-150 audio inputs, so it's heading in that direction.

Hi All,
1) Will ver2.5x work on a ver5.7 board (so far I have found no list of supported boards)?
Sorry if I have missed that it works on all boards some where.

Thank you
I await your replay
David
Top

All DigiLite software and boards are mutually compatible. Use v2.5x all round, as that will enable SD card operation.

On DigiLite Config v2.50beta, click the OTHER box mid-right and then click USER SR. A box will appear to the right of the FEC setting where you can enter 3500. Only certain symbol rates are supported by the serialiser (dsPIC) software. The LED on the board will flash in groups of three if it gets a symbol rate that it doesn't support.

If you create files to put on SD cards, the identifying letter for SR3500 is N.

Thanks for the info Brian.
Not looking at it for the SD card support but for the SR and network support.
I use remote desktop at this time to the PC and it would be good not to have the 10m video cable out to the shed when I already have a network cable or 3.