Yes, also knackered here and possibly tried to do too much in too tight a time window, but was able to further test gear and this included the 'somewhat hopeful' (but worked very well) 6cm RX solution. Glad to have seen you on 10GHz so I know that RX works, but no picture decoded.
The preceding Saturdays tests where we worked up through the bands almost sequentially got the most contacts in the least time with minimum equipment changes (and chances for errors). If you throw in 2 days, multiple sites, more bands etc it becomes quickly unmanageable.....

My Lime USB gave up the ghost (reasons unknown ATM, red and green light up on USB but go out when I plug in DC) which for band view is now an indispensable facility, so much so I'm going to build up my second PD4 with a Lime mini in it. I then have three choices for TX, PD4/Langstone, PD4 Lime mini and Laptop/ExpressDVBTX with Pluto or lime.....
Leisure battery gave up 30A/Hr and was still doing well. See my other posts (later today), my veg garden is calling after weeks of neglect due to prep!!
Expecting delivery of a 70 watt capable 9cm amp today, not that it seems I need more than 20W, but there's always the moon.....
Gareth
Top

Phew - getting too old for this!

I left home on Saturday at 7 am, drove to Dunkery Beacon IO80FD near Minehead and was set up by 12 noon. As well as working G4FRE on all bands over a 138km path I had QSOs with G4KLB, G4UVZ, G0UHY and G8GKQ - failed with G4BVK and M0YDH.

All in all a good day and left site at 7pm, had a 30 minute detour via Minehead to avoid a road closure, and stayed in Travelodge on way back to get an early start in the morning.

Note the inversion layer in the picture which was below me and the white blob on the middle horizon above my bonnet is the Hinkley Point power station construction site. 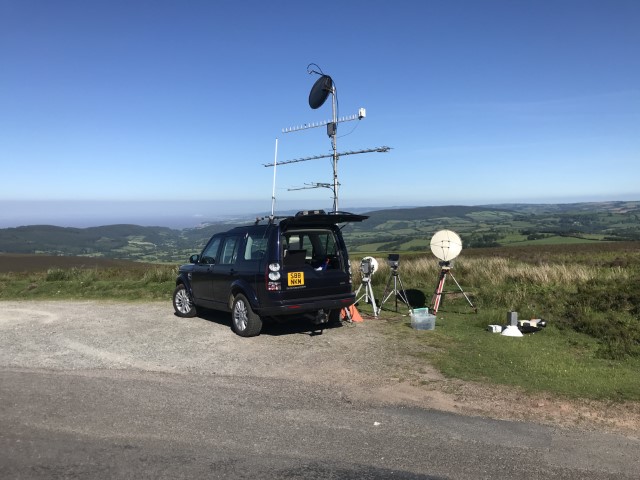 
On Sunday I was at Walbury Hill IO91GI by 7 am and worked Dave G4FRE on 24GHz, who was man/trolley portable on the top of the hill at Cleeve Common near Cheltenham, before the rest of the world was awake!

The day went well until my batteries went down, one of the problems of not going home overnight to charge them

I was particularly pleased to work G4LDR on 47GHz - my first on that band using gear I had built over the winter plus my new Portsdown / Langstone combo which is designed specifically as a microwave transverter driver.

I know the picture has a caption showing 146MHz but it really is 47GHz showing an MER of 10 over a 28km path. Several of us, including Dave, had issues with Portsdown bands and contest numbers - I suspect an update will appear at some point! 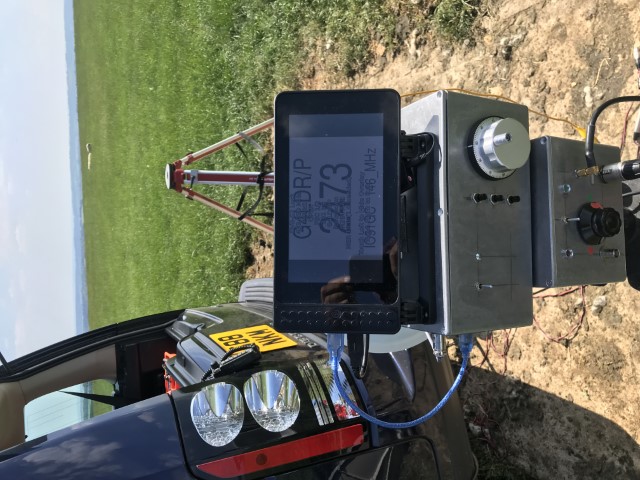 Having said that, I think the rules need looking at as the weekend did seem split between those out to enjoy themselves and give away a few points and those bashing away on the microwave bands to try and win the IARU contest! See my separate post viewtopic.php?f=75&t=7445 and comment please...

Well one thing and another meant I didn't get to play from a New forest hilltop so plan "B" set up in the canteen at work !!!! 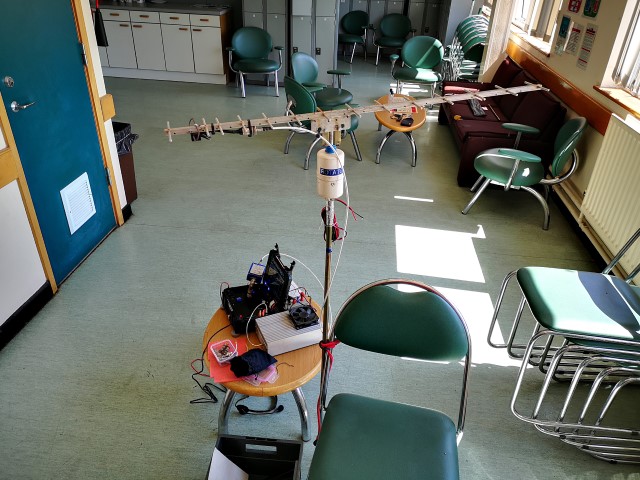 
I was able to see GB3IOW 23cm beacon 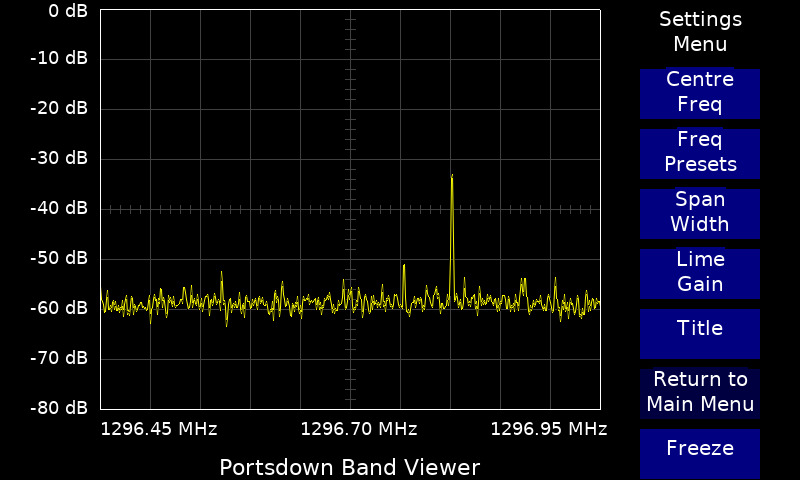 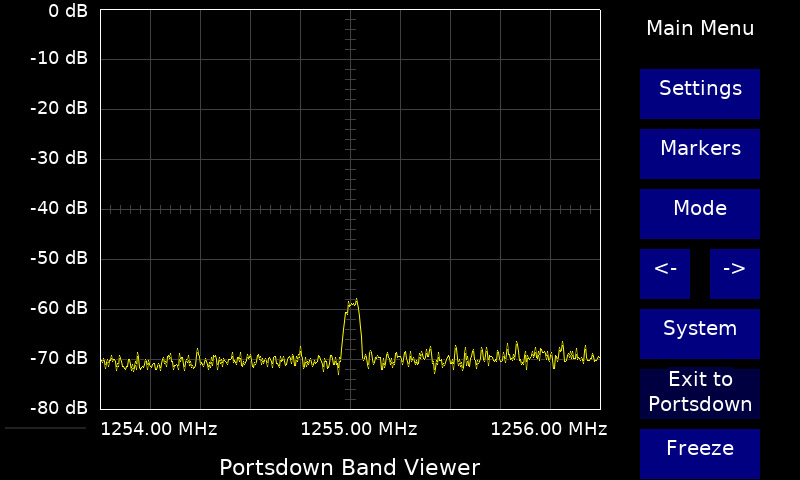 
But sadly no video so no points again this year

Turned out to be just a fun Sunday, activating 23cm and demonstrating the DATV gear to my local amateur radio club at Chatham (MARTS - 100 years strong next year). Very warm weather in Kent! 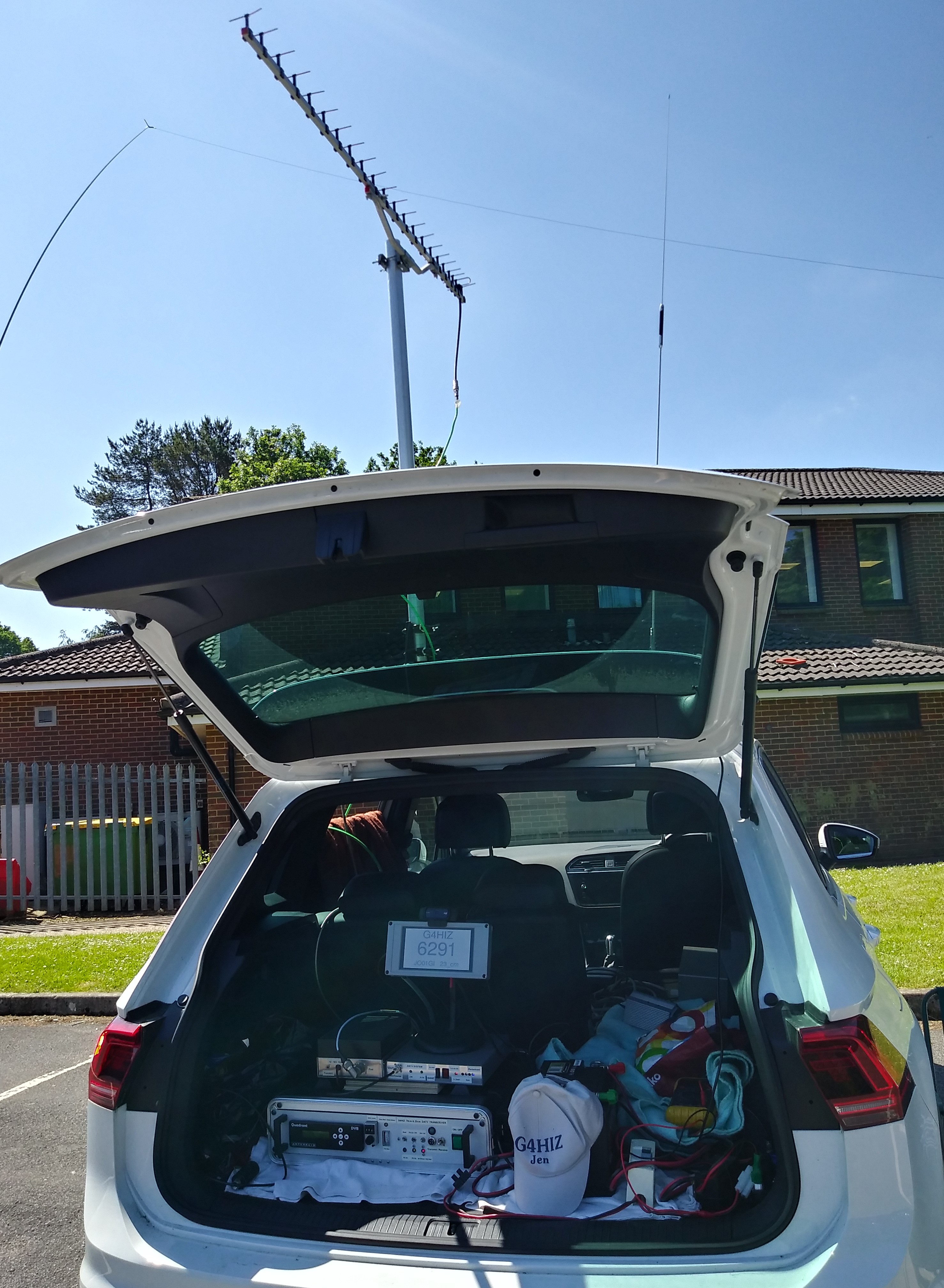 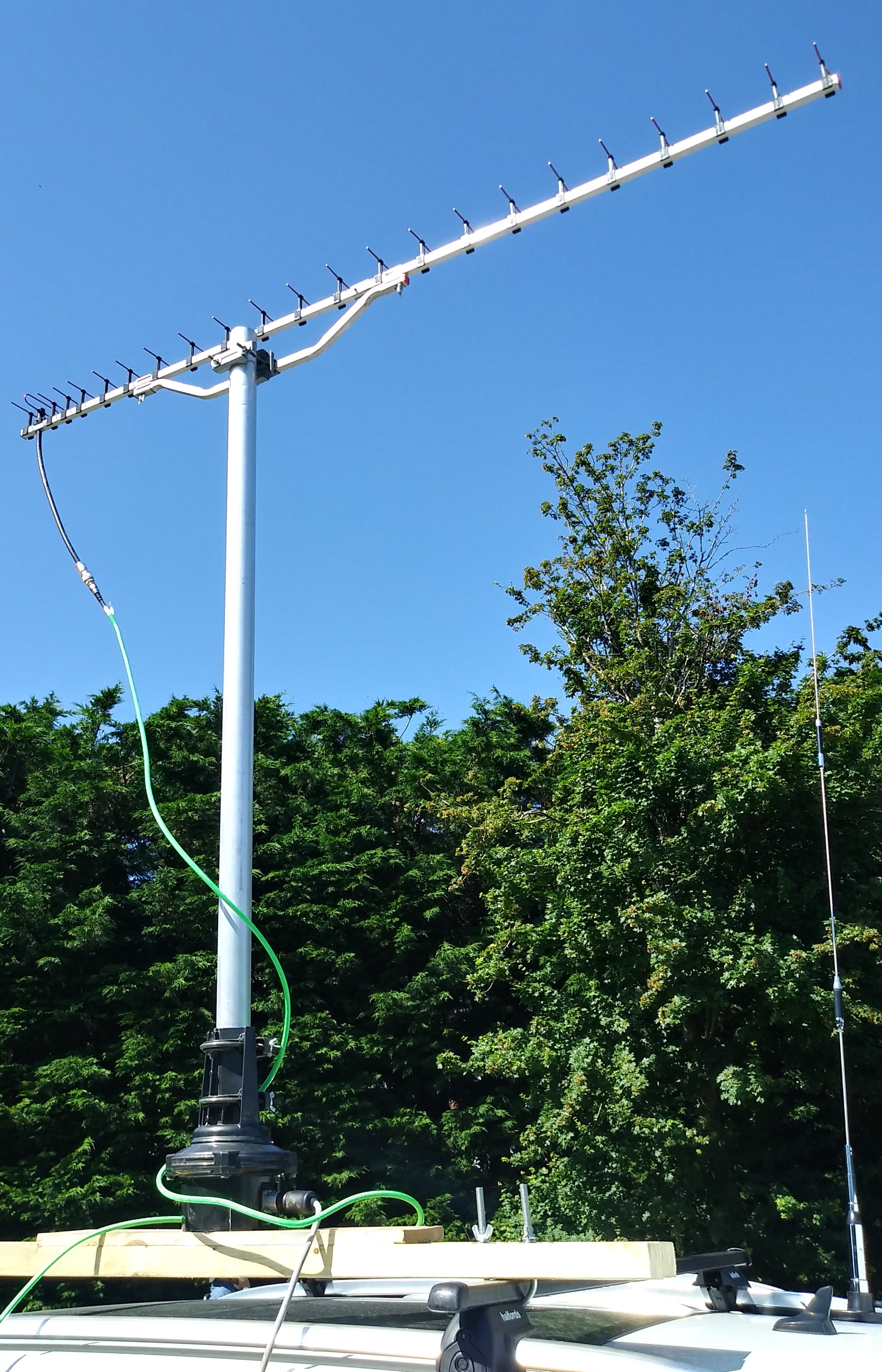 Went to Win Green on Sunday a place I hadn't operated from before. 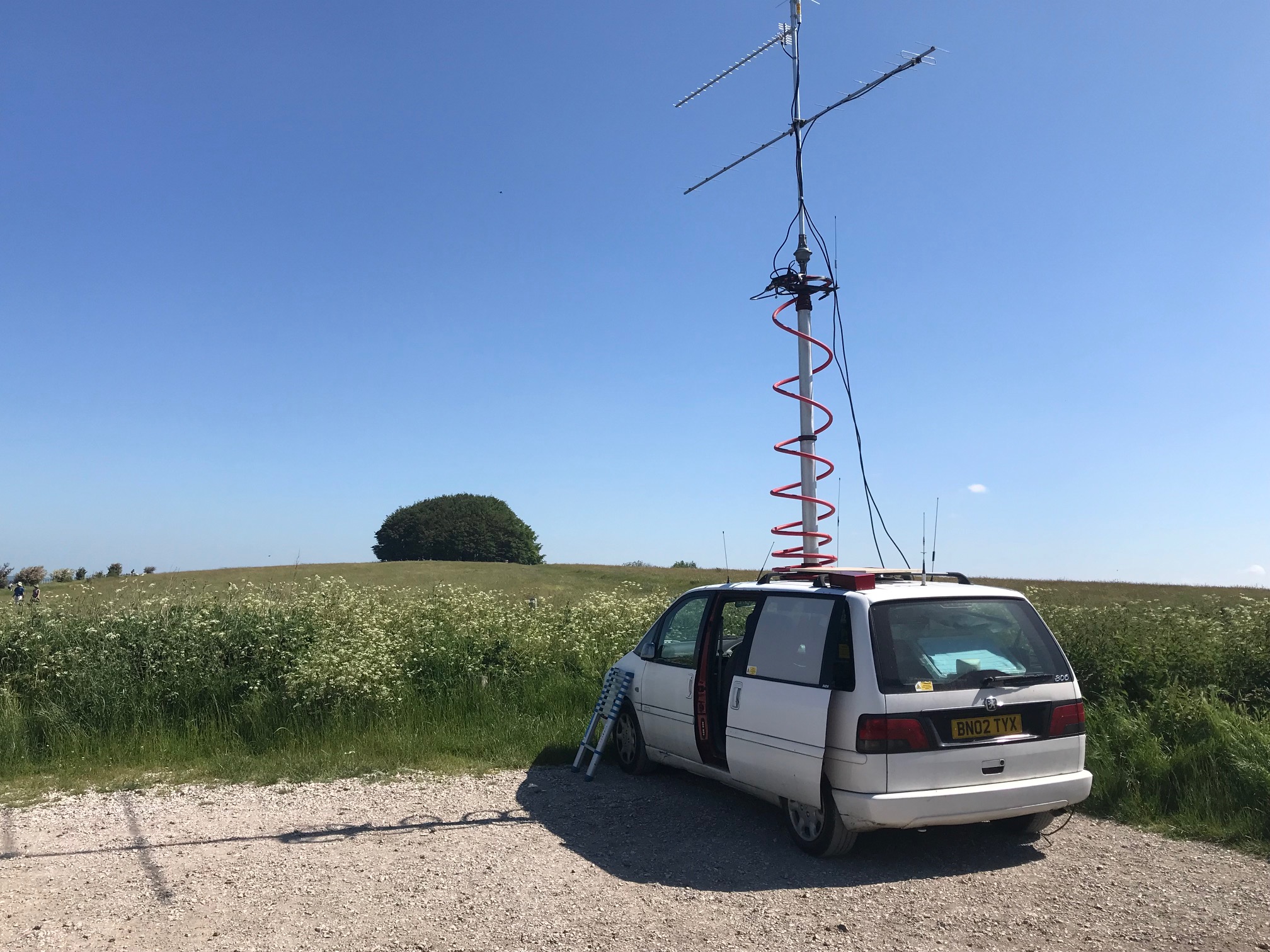 My QTH is on a hillside which has good paths north and east and a limited path north west. Local hills Dunstable Downs and Blows Downs are an obstacle in any other direction. Ideally I need to get out portable but my van has been sick due to injector problems. The van is all sorted now and I picked it up yesterday from a local garage.

So last weekend I had no choice but to stay at home and with limited hardware; 23 and 70cms. Most of my kit has been in a storage unit half a mile away during lockdown. Initially I struggled to be enthused but the possibility of losing the 23cms band spurred me on to have a go.

I was active both days and was pleased to have contacts with a few relatively local stations including Graham G3VZV and Phil M0PIT. What made my weekend especially pleasing was the opportunity to work David M0YDH on Clee Hill. It must be a year ago when I received pictures from David on the same site.

On Saturday the situation was reversed and David received my signal at 125ks on 70cms, sadly nothing received at my end; conditions were poor. Then on Sunday we tried 23cms and again David received my picture; this time at 333ks. I’m not sure who was most pleased; it was Davids first reception on 23cms and two 147km contacts for both of us.

Hopefully I will be in a position to get out more often but I agree we should limit the bands, at my age it’s too physically demanding to haul loads of kit about.