At the CATS Bazaar in 2018 I bought a pair of 'VHF pager amps'' mainly for the dual mosfet and heatsinks/fans that came with them. CLoser inspection revealed that each one had a CA2832C broadband amplifier module as part of the driver chain. https://www.digchip.com/datasheets/part ... 2C-pdf.php Trying to use the amp 'as-was' for DATV showed something was causing instability, so I removed the significant gain block and used a bit less drive. It worked, but not as well as my cheap Chinese 'VHF amp using a MRF186. However, with the advent of Pluto DATV and of course Lime derived signals, operation on 50/70/144 is relatively simple (no 50 for the Pluto).
About time I reused the handy little gain block. Unconditionally stable the data sheet says, +35dB 1-200 MHz too. I was planning on putting up a tinplate divider between input and output, but it does indeed seem to be stable without one. The 28 volts operating voltage is derived from an eBay XL6009 step-up converter board, available at £5.40 for 4 delivered. Additional filtering at the output was added to keep the nasties out of the amp. The heat sink came from a defunct 5.8GHz drone transmitter along with the little fan, running off a sub regulator at 3.3 volts. Just about keeps things cool as the amp is I suspect heavily biased for linear operation. It certainly produced a clean signal when driven from my MFJ as a test. A couple of SMA sockets, some standoffs and a grommet, along with a nice blue LED and on/off switch complete the gain block. I'll try feeding it with some DATV tomorrow as I check over the VHF contingent of my station.
Gareth 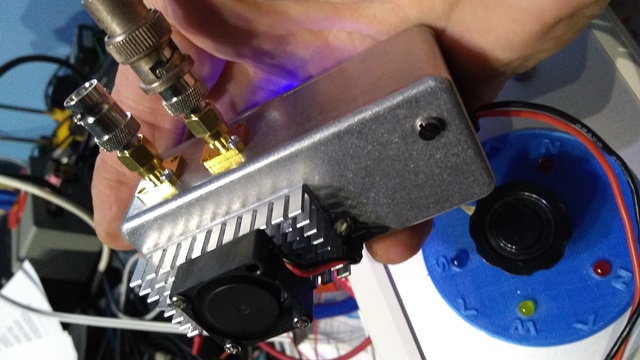 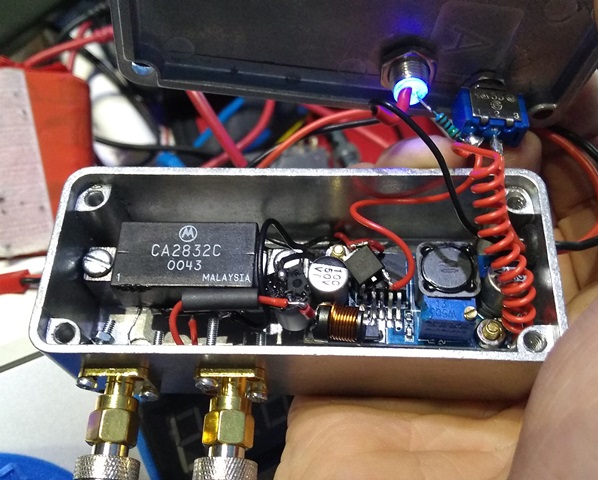