It does foul the support arm so the back face can not go back as far as it should, BUT, I went from a MER of 8.3 to 9.0 on first attempt as it is so the beacon is now a D5/D6 with me from D5, So I guess that my previous best with the standard LNB was not as good as it could be even though I could not align it better. 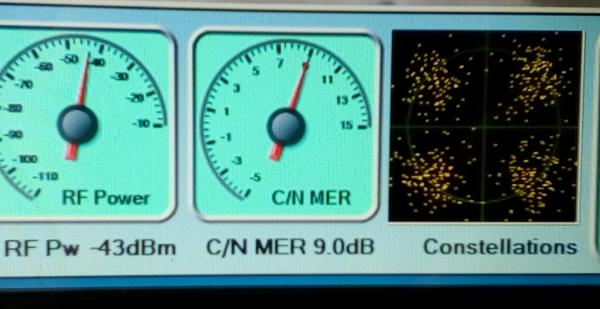 So possibly some more improvement can be made? Still nothing for TX yet.

The dish is 105 cm by 115 cm horizontal and vertical, so would appreciate knowing if these figures are reasonable?

Now watching the figures drop as clouds get in the way.

AdrianH wrote: ↑
Mon Aug 12, 2019 2:54 pm
OK PTFE rod arrived today and I found it a very awkward job to do indeed, PTFE does not hold well in metal lathe jaws, so I think I would recommend buying a rocket LNB and butchering that for the lens.


You have done a good job there. Slippery stuff. Rexolite was recommended but butchering a cheap rocket LNB is the way to go.

AdrianH wrote: ↑
Mon Aug 12, 2019 3:57 pm
It does foul the support arm so the back face can not go back as far as it should, BUT, I went from a MER of 8.3 to 9.0 on first attempt as it is so the beacon is now a D5/D6 with me from D5, So I guess that my previous best with the standard LNB was not as good as it could be even though I could not align it better.


You might need to do some mechanicing to get it to fit but an MER of 9 dB is not bad. Best I see is 10.7 dB but that is with a 2.4 dish. With the 32m dish I understand they received 11.7 dB. In general, I RX signals about 1 dB higher that people with a 1.2m dish. The limit is the uplink. If you can see the transponder noise floor you are into diminishing returns improving the downlink.

I believe I understand, it is a bit like the satellite is operating at a max l;evel above the transducers noise floor so after a point you will not see much of an improvement if you can see the noise floor and the signal.

The bigger dish then the smaller power level you need to maintain a level of ERP at the dish and therefore received level at the satellite all else being equal.
G8UGD
https://qsl.net/g8ugd
Top

We transmit to the satellite, for practical purposes our transmitted signals are noise free (excepting phase noise).

The satellite transponder receives our signals plus thermal noise from the earth and internal noise in its receiver. It amplifies and re-transmits this at about 100W. The gain is fixed but there is AGC if power levels become too strong. The re-transmitted signal is combination of the signals and satellite receiver noise. The uplink signal to noise ratio is constrained by the maximum recommended signal level into the satellite.

The ground station receiver receives this relayed signal and noise and adds noise of its own. This noise is a combination of the noise from the environment and the noise from the front end LNB. Ground station signal to noise ratio has a more of less direct dependency on the receiving dish area. The downlink sensitivity is only constrained by dish size.

Noise always adds up so the final signal will have the satellite's uplink noise and the ground station receiver noise added to it. If one noise level is much larger than the other it will dominate. On the wideband transponder, it appears the transition point of approximately equal uplink noise vs downlink noise occurs with dishes of around 1m for signals at the same level as the beacon. There is a limit to the gain that can be had by improving the ground station any further. Once the difference is 10dB it's not going to make any significant difference. The reason dishes of around this size are about right is not a coincidence.

In practice this means a 2.4m dish which has 6 dB more gain than a 1.2m dish will not gain 6 dB in Beacon MER. Tests indicate a dB or two, MER 10.7 dB. The 32m dish at Goonhilly has over 20 dB more gain and only managed another dB, 11.7 dB MER, so it really is diminishing returns.

For transmitting, it is the EIRP that counts and you still get the extra gain of a larger dish, but the EIRP is constrained, so a larger dish means less power is needed. A 2.4m dish needs need 6 dB less RF power compared to a 1.2m dish, which needs 3 dB more than an 85cm dish. There is a trade off between RF power and dish size that depends on the relative cost and practicability of a dish size and amplifier power. Ideally you would use a few 100mW to 32m dish, but not everyone has space for one in their garden.

Dishes smaller than 1m tend to struggle at receiving weaker signals because they can't achieve a good enough downlink signal to noise ratio. I found a 55cm dish can no longer receive the WB beacon, MER 2. It has 7 dB less gain than a 1.2m dish which achieves an MER of 9. There is a fairly rapid decline below 1m and a rather limited gain about 1.2m. Again, not a coincidence. I recommend as big a dish as you can get away with in the range 1-2m and as powerful an amplifier as you need for the bandwidth you intend to occupy, but 50W should be adequate for reduced bandwidth DATV.

This analysis can be repeated for the narrow band transponder. This has more gain but similar noise levels on the uplink. The result is you can use a smaller receiver dish, but still need significant power. Were someone to try sending DATV through it, they would find it required similar uplink power to the wideband transponder but a more modest receiving dish. The reason people can get into it with a watt or two to a small dish is because 3kHz SSB requires much less power than 333ks QPSK.

Just an update to my Patch Feed.
I have now added a small horn.
This has improved the receive signal by 2dB approx.
My dish is the cheap 1.8 prime focus.
The transmit and receive are now very good.
The horn made from a cut down plumbing 28mm to 22mm pipe reducer.

These come in other sizes too. I wonder which would be best. The biggest one my Plumbase could get was something like 56mm to 22mm! The cone on the bigger ones might be better. I saw but did not use as my rocket nose is working on my current poty.
The hole will need to have protection as things like bumble bees will find it very tempting as a home!!
Top
Post Reply
27 posts