I finished building my BATC V2 MiniTiouner a few days ago, everything seems to be working well so far but I have a question about the i2c performance.
Using the application "Test My MiniTiouner" and pressing the TestNIM button the i2c performance hits around 67% maximum. I have tried multiple computers, high quality USB cables, PSU's (Linear and SMPS) and cannot get it above that. I have seen it around the 56% when running this test sometimes.

Replying to my own thread.
Going to modify my board so the 3V3 line powers the FT2232 directly, avoiding USB power and the 3V3 Regulator on the FT2232 Board.
Will update this thread after I've modified it and post the results.
Top

How strange, I tried to wire it up for "Self Powered" and my performance went down to 45%,

Just discovered something else, if I run the board outside of the recommended Hammond Enclosure I get 75% i2c performance, as soon as I put it back inside even with the end caps off it's high 50s/ low 60s.
Last edited by 2W0ODS on Thu May 16, 2019 11:09 am, edited 1 time in total.
Top

I am not sure why you are doing this but perhaps a simple question - does it work?

Yes it does work, but I would like to have maximum i2c Performance ideally.
*UPDATE* Apart from the i2c issues it wasn't working properly.
Last edited by 2W0ODS on Thu May 16, 2019 10:18 am, edited 1 time in total.
Top

Yes it does work, but I would like to have maximum i2c Performance ideally.

I don't understand why but you may need quite a few changes as that was never a design target.
Top

Yes it does work, but I would like to have maximum i2c Performance ideally.

I don't understand why but you may need quite a few changes as that was never a design target.

Because if the i2c performance is low then the update for what's displayed in the Minitioune software will be slower to update, also I plan on running an OLED etc off the device and want to minimise any interference.
I have a feeling the noise on the i2c bus is coming from the buck converter.

Although it's not i2c I just received a number of chips from Richtek (RT5047 family) that I'm going to experiment with as well.
Top

Update to this thread. I have found the issue, the Serit NIM is faulty.

I took the unit to GW8MER's as he has an identical build, we powered mine up and it took a few attempts to get it to work with the MiniTioune software and Test My Minitiouner. Each attempt with the test software either froze, threw an error up or had dismal i2c performance.
We had a DATV express transmitting and ran the Minitioune software, the update for the information was very slow and I was also getting poor signal readings etc. And it would just consistently freeze.

I then switched over to Mike's Minitiouner (GW8MER) who has an identical build, during the disconnection stage I commented to Mike that these Serit NIMS run very hot, as I felt the tuner. He looked at mine and said how strange his is never that hot.

During the testing of Mikes unit his i2c performance was hitting high 80's and as the DATV express was running we tuned in to that, things were much more stable and much betting signal readings and no freezing etc.

We decided to swap over the FT2232 board from his to mine... No Change.

Next thing was to use Mikes HP 8556B, we swept my whole board and everything looked identical, all the switching regulators were quite clean, the buck converter was performing identically. However that was some noise from the Serit NIM.

I fired up the oscilloscope and checked the board over, everything again was identical to Mikes unit, apart from some noise coming from the Serit NIM on it's i2c bus.

We both noticed that my Serit NIM was MUCH hotter than his, as they had both been on for the same time. We got out a IR gun to work out the temperature, but it wouldn't get an accurate reading. I decided to just pop off the covers on both NIMS so we could look at the IC's directly.

I had a close look at the IC side of the Serit NIM to see if anything was amis or a faulty decoupling capacitor, but couldn't visually see anything.
However when I looked at the rear of the Serit NIM, I could see some shiny blobs of metal, I looked more closely under a magnifying glass and found that the pins were bridged on the left hand side and a few via's had metal stuck all over the back of the board, I flicked the metal off the bridged pins and put it on the bench, I then put the soldering iron on it and it melted. Something had gone wrong in manufacture and the whole Serit NIM had stray bits of solder inside. I can see the F's are hand soldered so can only assume its happened at that stage as its mostly SMD and not wave soldered.

Sadly removing the stray bits of solder and the bridge didn't solve these issues, but the tuner does now run cooler! It seems the issue in manufacture had already caused damage to the unit.

I have attached pictures, one shows the footprint of where the solder was bridging the pins. 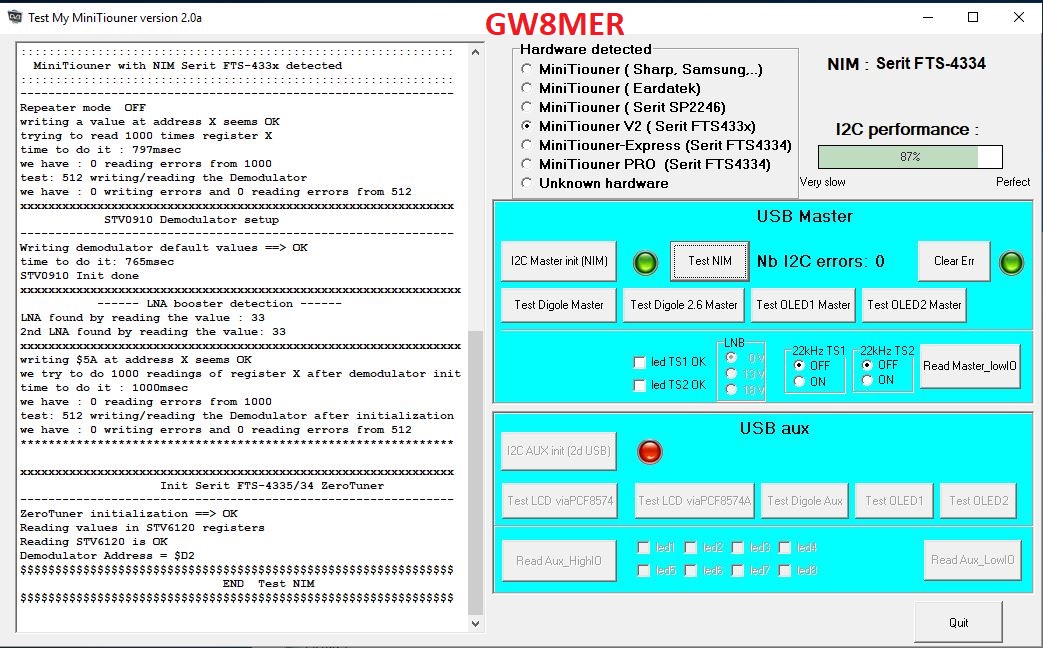 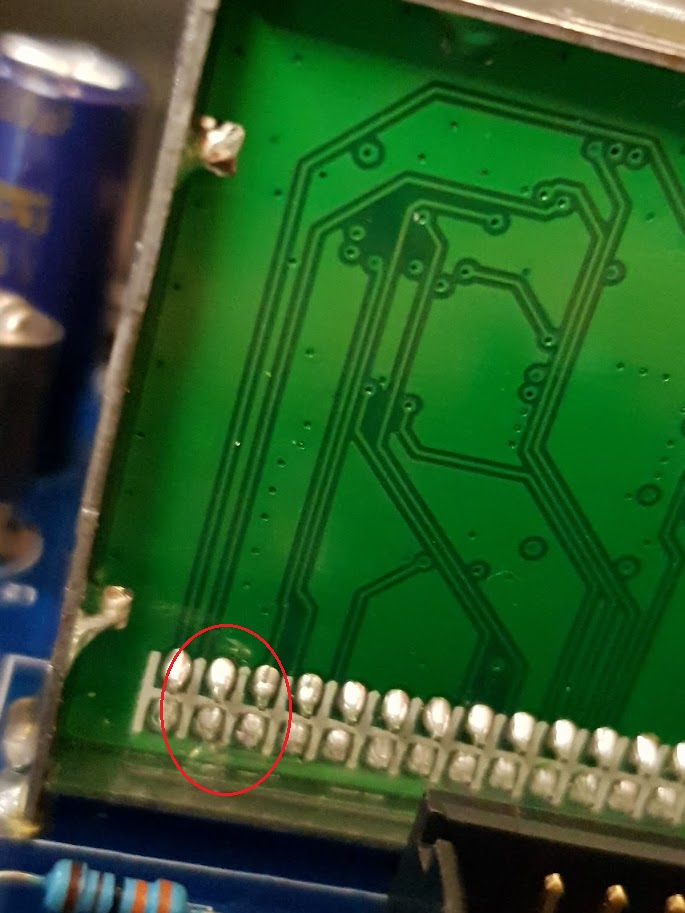 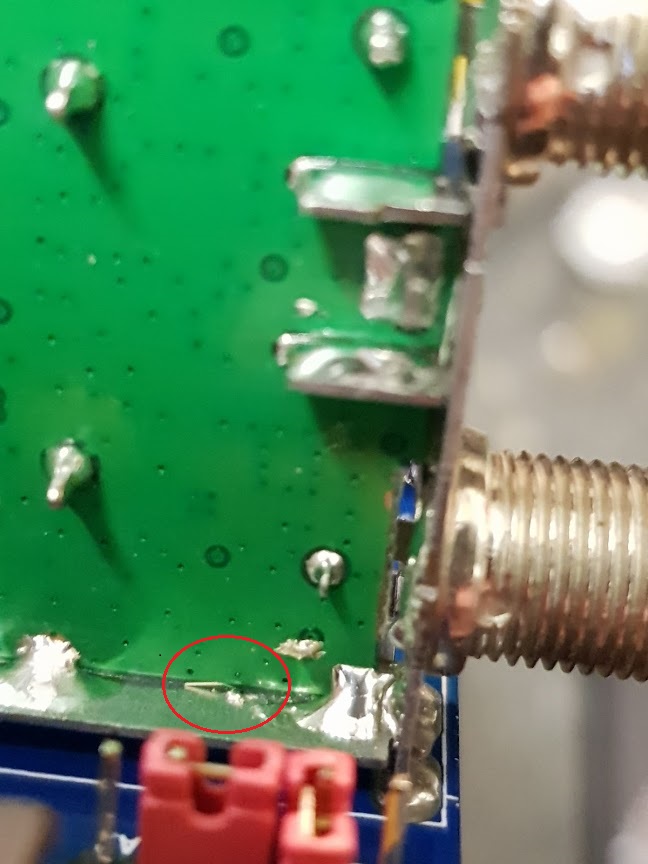 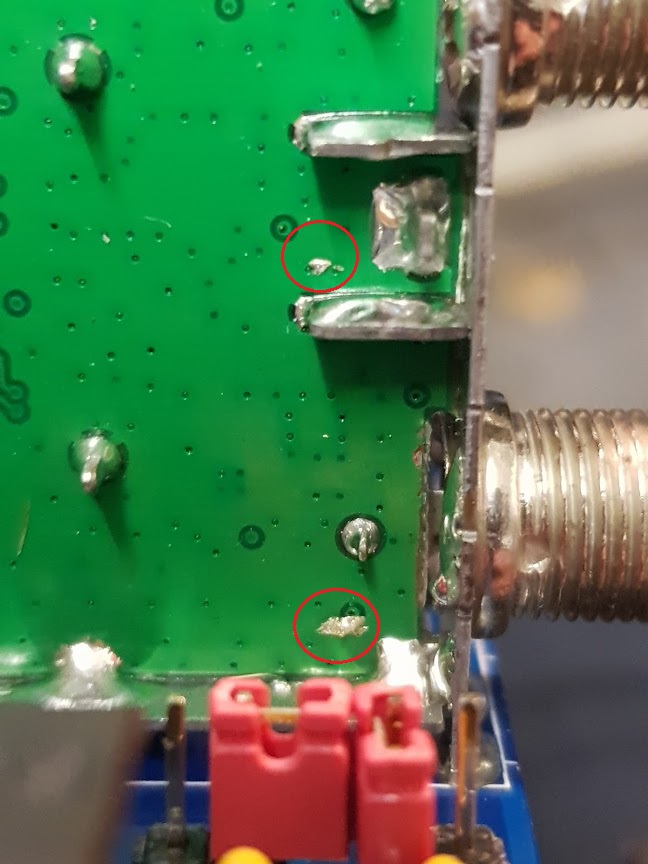 Big thank you to Noel for replacing my faulty NIM just had 5 minutes to fit the replacement and it's all working perfectly.
My I2C score has shot right up too 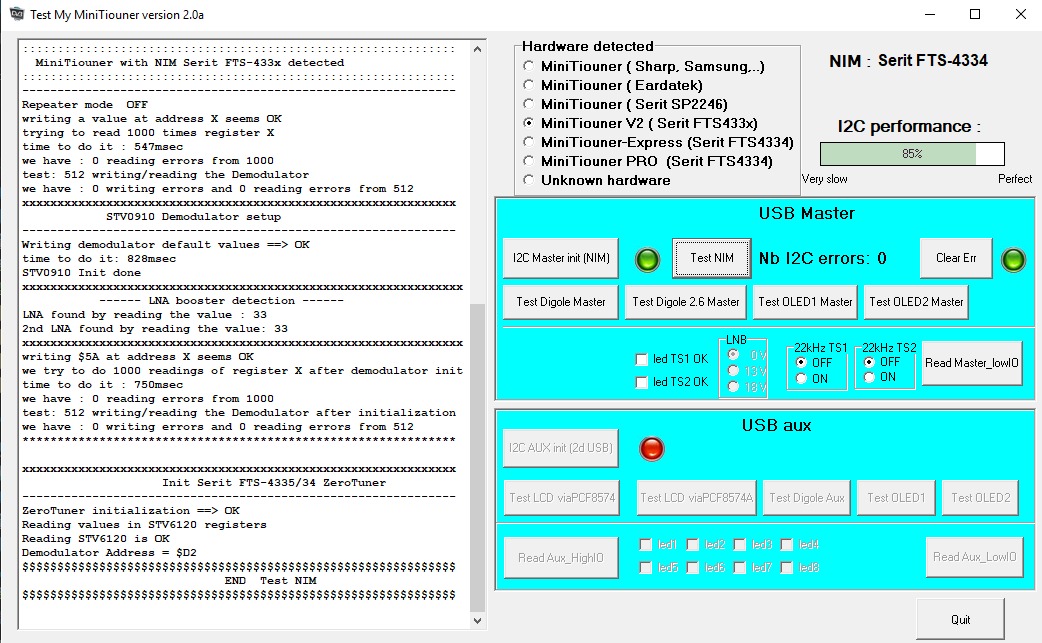