Is there a formal way of reporting the bug in the LAV Decoder?

I notice that when Minitioune is running the CPU core it is using runs at 100% regardless of anything. This is a problem as it uses the maximum power it can. On a desktop this is of little consequence, but on a laptop it flattens the batters quickly. Is there any way to stop it using all the available CPU resource all the time? This is the same whether it is a Pipo or an 4GHz i7. Almost like it is in a loop running as fast as it can. 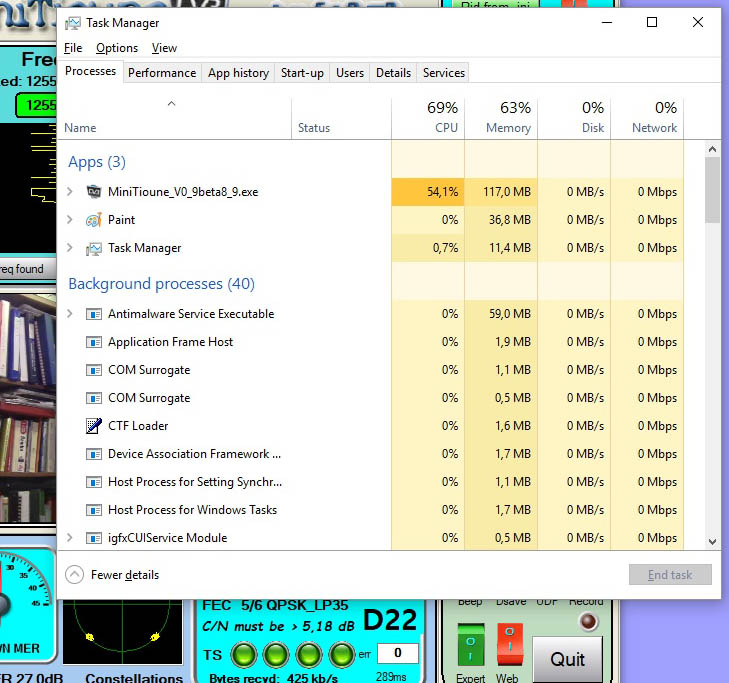 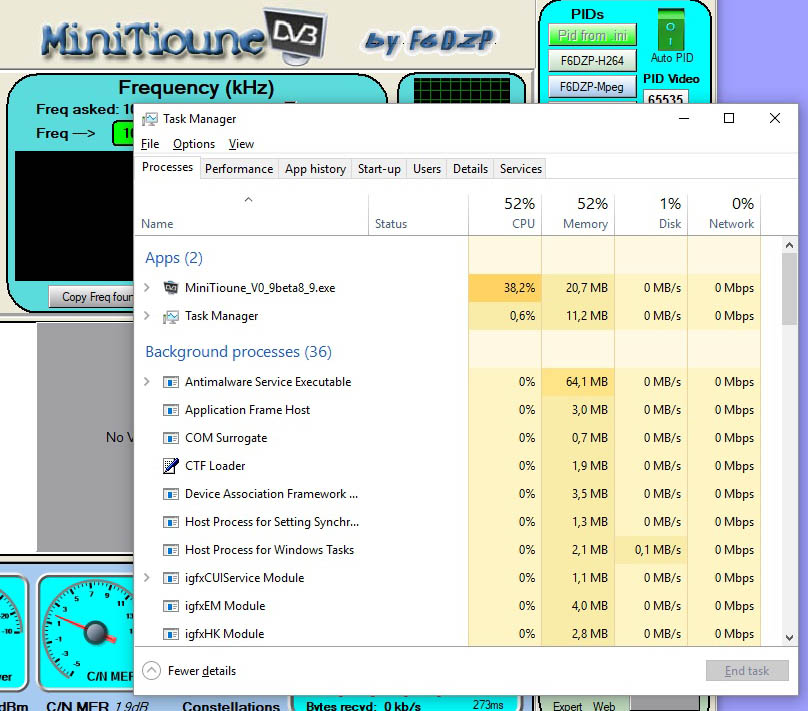 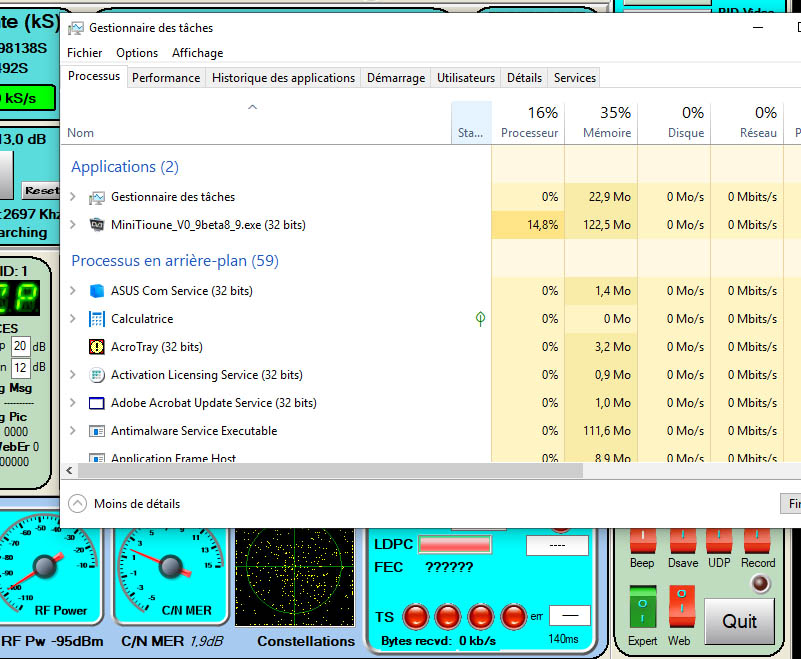 First question for me: why do you have 100%CPU used on you PC or laptop ?

There is a part of CPU% use by Minitioune, another part used by the decoder (Mpeg2, H264, H265)
we must distinguish these 2 parts.
* main Minitioune %CPU is used for measuring (%lock, RF level, MER, constelations, oscilloscope, derotator scan..)
* decoder can use a big %CPU, depending the codec used, the decoder filter used and the GPU you have ( recent CPU have hardware decoder for H264 and H264)

Interesting - it regularly uses 100% of one core thread. Even when not receiving anything. I have 8 and as soon as Minitioune runs the CPU as a whole goes to 12% - its not so easy to show - it was on CPU6 - you can see it is fully loaded until I stop Minitioune. The problem with this is it bumps up the core frequency to maximum.I postulate it is grabbing as much resource as it can get, from 1 CPU thread which is why you see the figures you do.

If you look at the CPU as a whole, it is 12% but as it is saturating one core - that's what flattens the battery and causes the laptop to get hot.

I don't know what is causing it but it is the same on all machines. The above were without a signal being received, so the codec is dormant.

The thread that works here is the measurement thread that read all data from the NIM, every 100ms, we have 512 I2C/USB access just for constellations
(512 points displayed), + others measurements...

if the whole CPU% is 12% , I am not sure that because one processor is 80% occupied and the other 2% occupied, the consumption is much higher than
if we have 12% CPU occupied on all 8 processors for a whole 12%.
so what could the difference in consumption?

I could divide the measurement thread in different threads, I'm not sure the gain in consumption could be high.
I could ask to display less points on constellation...
I could stop all measurement...
And just for the case we are using a laptop without power supply.

It works well on a PIPO or tablet with little processor, so I think it is not essential to spend time today on that. ( but could be taken in account in future?)
better to work on dual receiver.

You are right it is only 12% of the total, but they way these core i7 CPUs work means they throttle up and down so it is throttles to the max 4 GHz and they immediately the CPU fan speeds up and power consumption increases on my laptop. I only have 4 processors but Intel calls them 8. Maybe it is just me but odd it is like that on all laptops. It could be the CODECs but they are not used when idle are they?

I am not sure why this is happening, but it's the sort of thing that happens in a tight loop like you might use for reading something as fast as you can. The compiler should normally be sorting this out automatically. This 512 actions every 100mS should not tax an i7 at all. Maybe it's sitting in a loop waiting for the 100mS to pass? This might also explain why the Gui is sometimes slightly slow to respond? Where is the Application->ProcessMessages() called? (Slow being a relative term here, its not really slow, just not always instant)

Dual receiver - yes please. When we have more instances, the CPU load is going to be interesting.

you have 4 processors but multithreaded, that means that these processors can process 8 threads in parallel, so pseudo 8 processors.


maybe it's sitting in a loop waiting for the 100mS to pass?

it's a timer that is used.

The 80%CPU used for one "processor"seems to be specific to Win10. 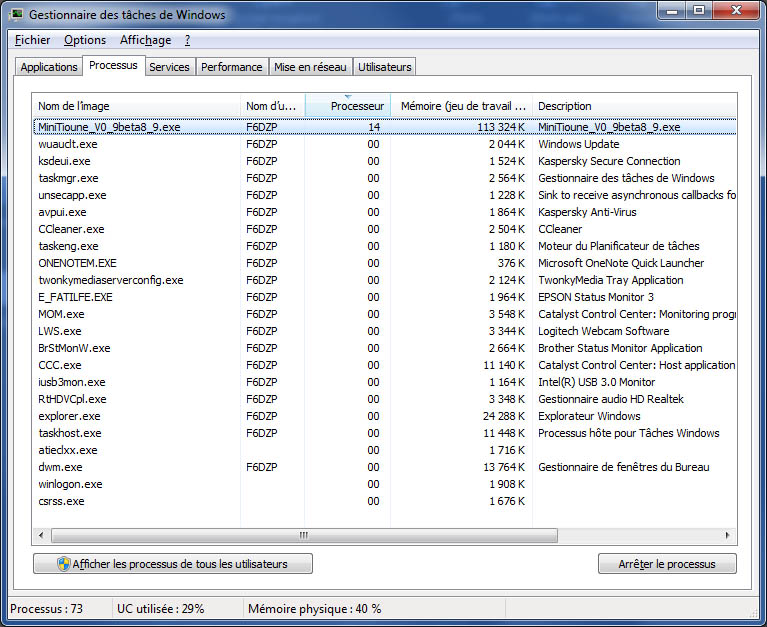 .
and the distribution of %CPU for each processors is more equal:
... 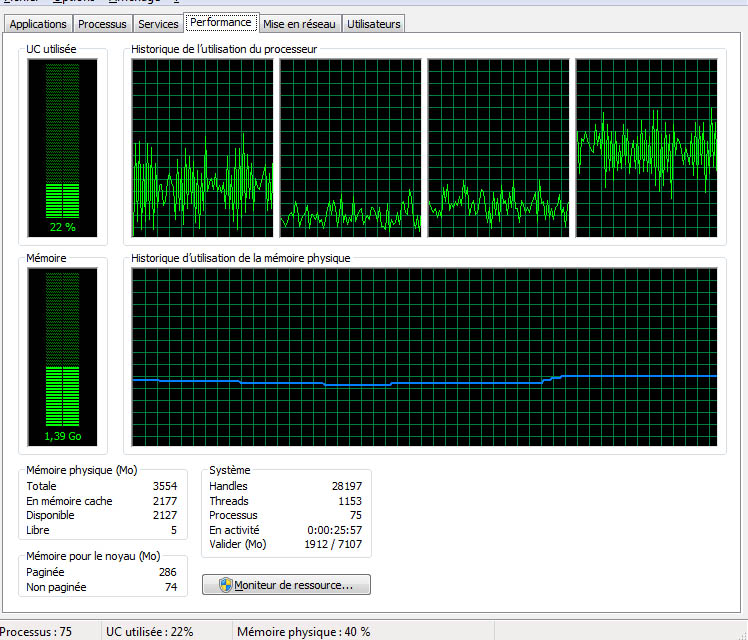 So, it is not Minitioune software that decides to use 80%CPU in your case, but Win10, (or the way that Win10 show CPU% used is not real ?? or strange? perhaps this pseudo 8 "processors" are half real processors and that should say that 80%pseudo CPU = 40% real CPU ?...)
.
By my side I consider that Minitioune using only 14%CPU is not a shame, when I look at the way the different processors are working under Win7, I don't see any warning that tell me that one processor is 80% or full used.
.

I don't know what to do when Win7 and Win10 seem not to work same way and show so different result, my software is the same.
When a software use only 12 or 15% of CPU, I think we cannot say that it is a great power supply consumer.

There must be a reason - the problem it causes is the boost. A it maxes out the CPU core which goes to its maximum clock rate. This is serious as the CPU idles at 1 GHz but as soon as minitioune runs it boosts to 4GHz. Power consumption grown enormously. It seems we are not the only ones and as Widows 7 is end of life, this is going to impact more and more.

I checked the core affinity and it is enabled across all CPUs. Running in Windows 7 compatibility mode doesn't help. Maybe it is something to do with the compiler? Is it a 32 bit vs 64 bit thing?

So, there is something different between your configuration and mine. 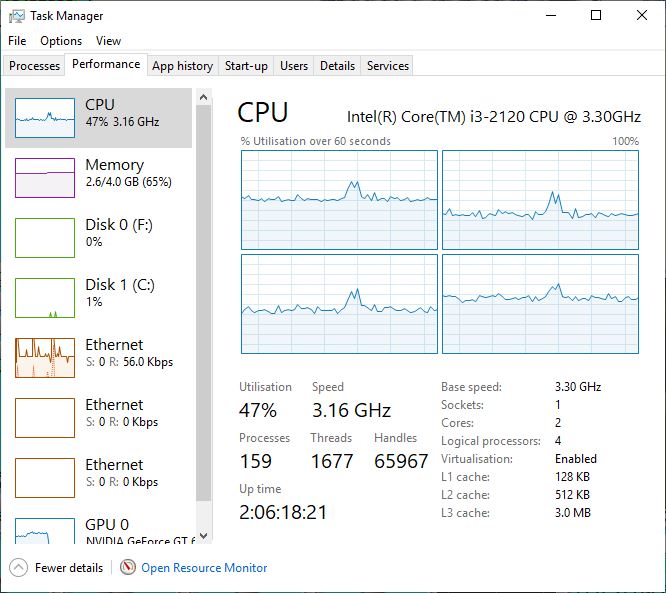