Well here goes, this is my Portsdown 4/Langstone combo so far. It includes two small amplifiers to boost the output of the Pluto, one covers 50-700MHz, the other 400-4GHz. Between the Pi and the speaker is a VOGAD unit I made using an SL6270C. The unit is mains powered with a 12V psu and a 10A buck converter for 5.2V. 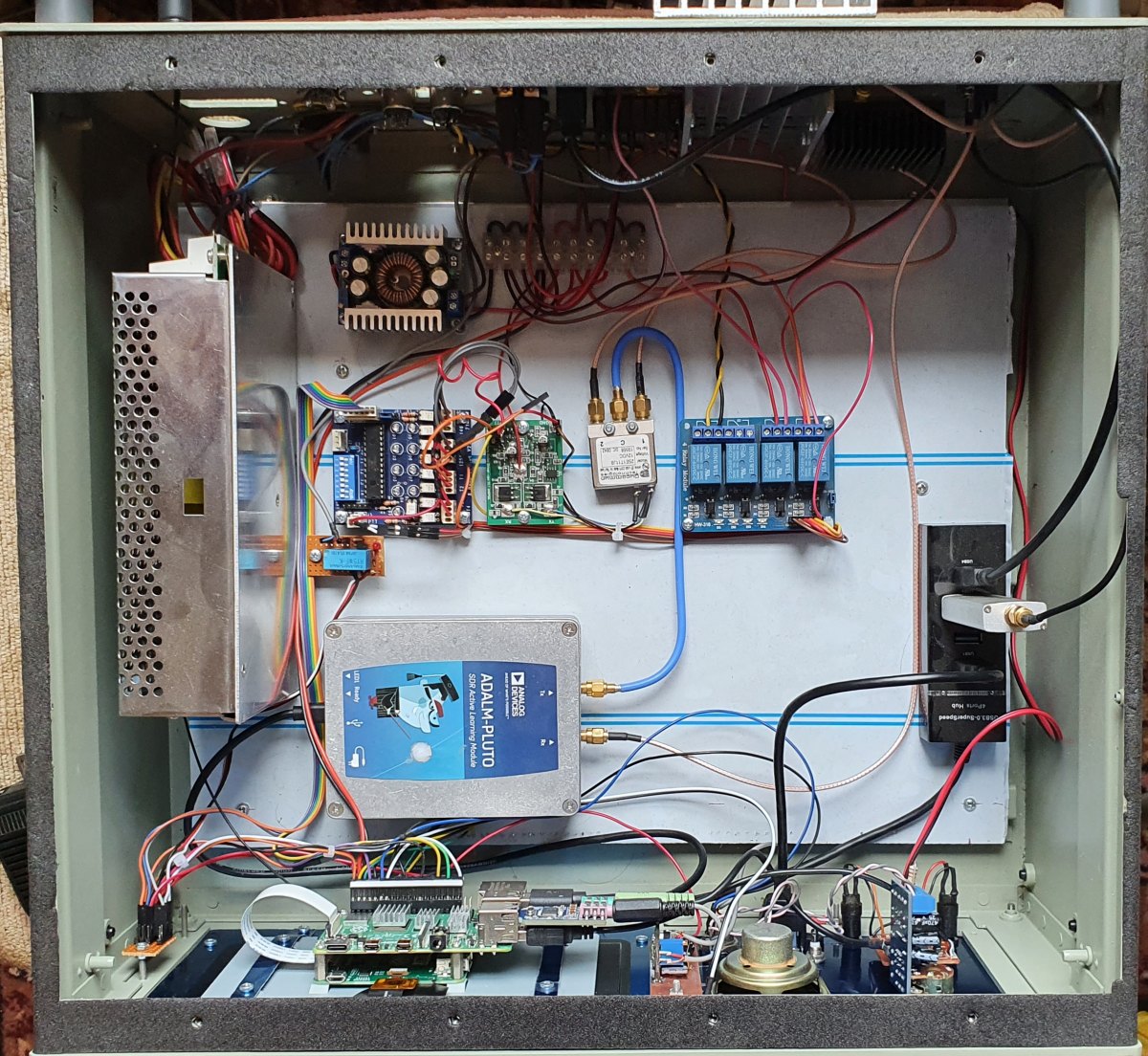 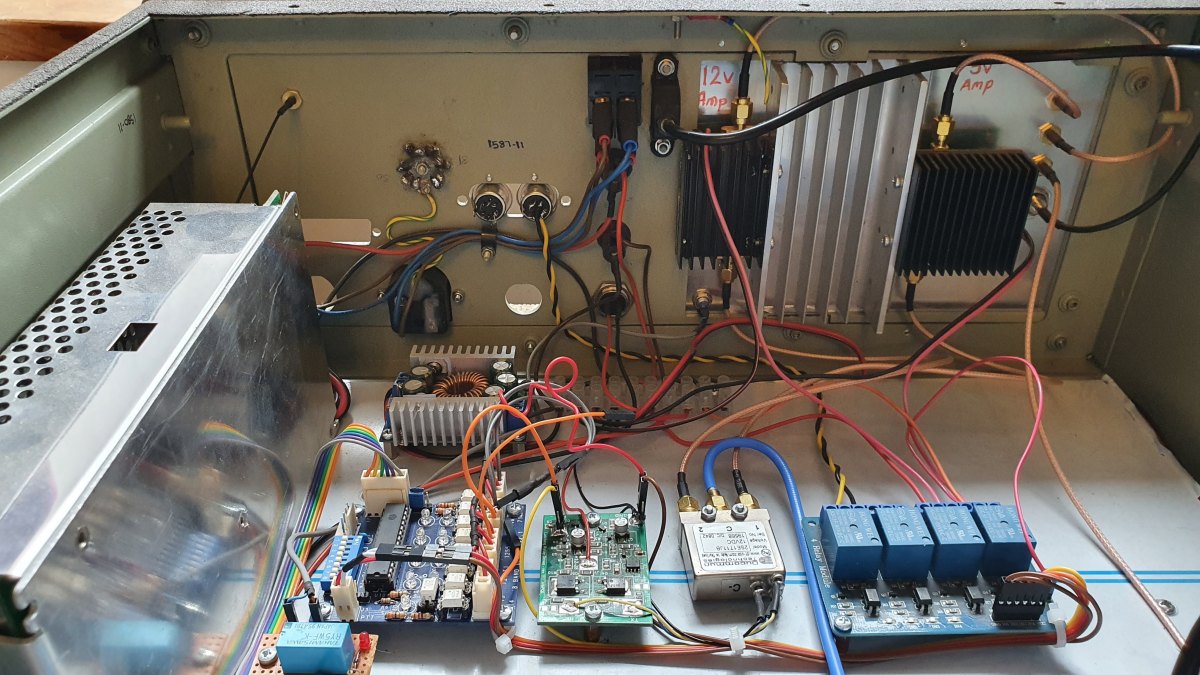 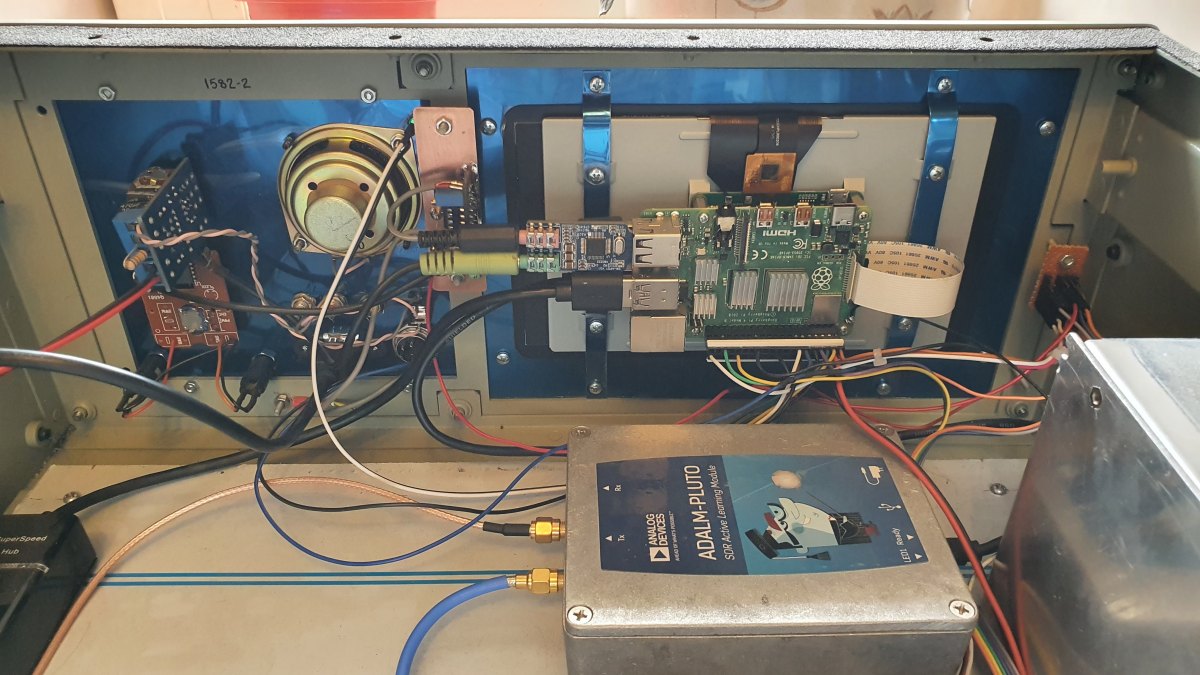 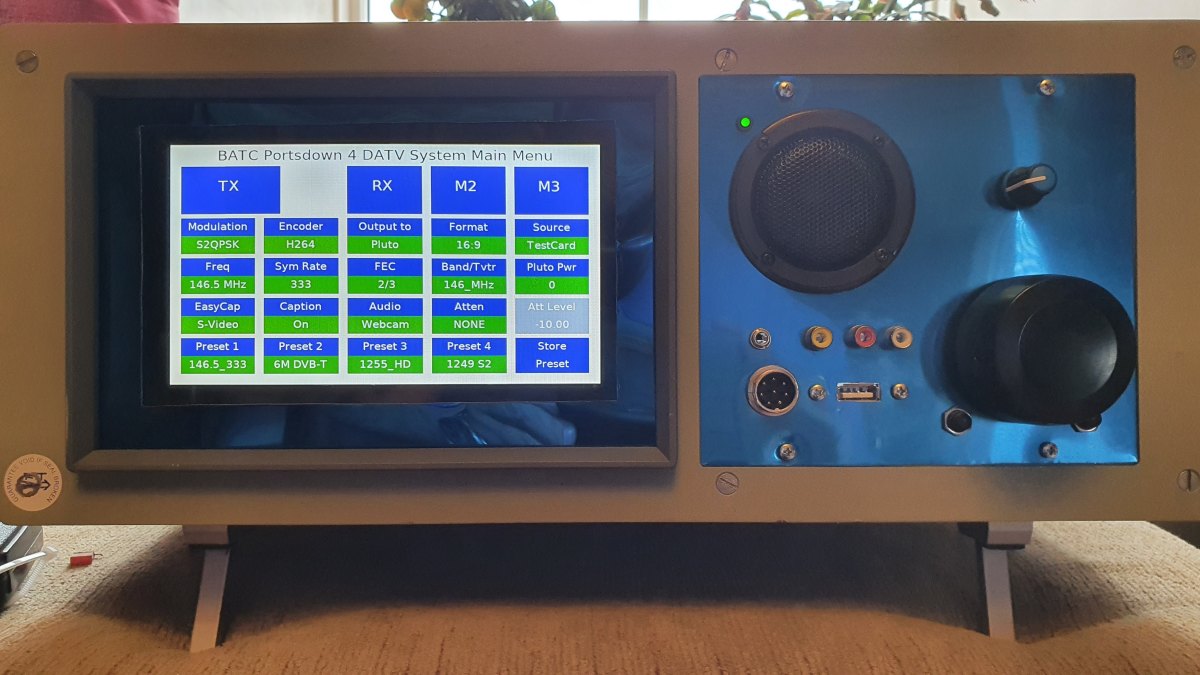 Just starting with this Digital stuff. In the US we are using mostly HiDes boxes with either 6Mhz or 2Mhz bandwidth. So, wanting to do 1Mhz and below, I built a Knucker receiver. Thats when I discovered I had to build a RPI to work with it

. So I ordered a RPI4 and loaded up Portsdown4 on it. I've figured it out enough to get Knucker to work on 1 & 2 Mhz bandwidth receiving my HiDes UT100 from across the room. Took a while to figure out all the settings that would allow OBS Studio to work with the UT100 at these bandwidths, but it is now working great, at least across the shack.

Next on the agenda is to get my Pluto working with Portsdown4 to transmit at 1 Mhz bandwidth and below.

Is the Portsdown4 program capable of running full duplex using a Pluto and Kuncker? Or will I need 2 RPI's for this?

My first attempts at transmitting with the Pluto were using the DATV Express program on my laptop. I got it to transmit what looked like a DVB-T signal, but the signal was VERY unstable and not at the 1Mhz bandwidth I told it to send at. No luck seeing a signal with the Knucker.
Since most of the information I can find seems to be discussing DVB-S rather than DVB-T, I'm grasping at straws trying to make the Pluto work with either DATV express or Portsdown4.

Anyone have any suggestions on settings to use to get the Pluto to transmit a stable DVB-T signal at 1 Mhz bandwidth? I've tried the default Adalm/Pluto firmware & the F5OEO firmware. I'm using the USB/ethernet connection to communicate with Pluto. Should I be using a full ethernet connection with the extra cabling instead?

I'd appreciate any suggestions or possible links to previous conversations that I may have missed.

It is still in development. This is not yet a completed project.

You should be able to use DATV express to send. As stated in the wiki, it does work in some configurations with the Pluto (and possibly the LimeSDR) but these SDRs are not yet properly supported. I am not sure where Charles is on development but I have managed to make a Pluto work OK with DATV Express at 333kHz but it was a little reluctant at times. It was better at 500kHz. The output level was very low, but it did work for sending signals via QO100. I also have a DATV Express which works OK. Incidentally the experimental version of the program that does low bandwidths does not work at higher bandwidths, which may explain your 1 MHz issues. Try again at 500kHz.

You will need two PI4s if you want to do full duplex with PIs. The Portsdown 4 works so well with the Knucker as a receiver it's not worth messing about with a PC. You can always redirect the TS to a PC for display if you know what you are doing.

The recent Pluto advanced firmware from F5OEO has more capabilities, it can send DVB-T including the ability to send an RTMP or UDP TS - you need to ask F5OEO exactly what works. Just select DVB-T as the mode and see what it does.

I thought that you may be interested in my approach to Portsdown2020 that I used last year, in order to avoid buying yet another LimeSDR when the Portsdown4 arrived, as it subsequently did.

I adopted the concept of a Portsdown MODEM, ie a box with digital interfaces that will produce RF output and receive RF input and interface to whatever processor was required. This meant that I could use a Portsdown2020 (Pi3B+) or Portsdown4 (Pi4) for transmit, with a Portsdown/Ryde/Laptop for reception. When the LimeSDR gained the ability to generate DVB-T, the Knucker Receiver was added as a separate box.

The LimeSDR does not mind being connected via a USB cable. For control of the Band Decoder board and Programmable Attenuator, I used an HDMI interface board at each end, interconnected via short HDMI lead - only using it as a convenient lead with enough wires.

The concept is shown below and has been used successfully. 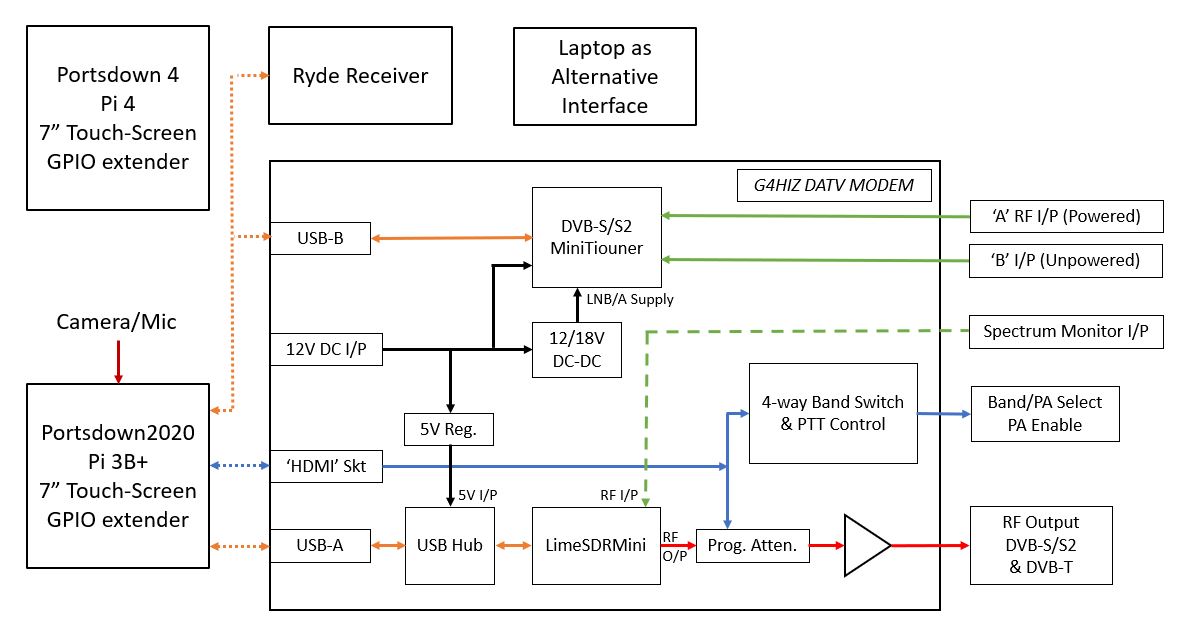 A few photos of the approach mentioned above, showing the Portsdown2020 setup. The 7" display was mounted in a polycarbonate box, with a cutout for the touch-screen. The Pi3B+ is mounted on the rear of the display and covered by another polycarbonate box. The whole lot being mounted on an old monitor support. The base-unit contains all the RF hardware, including a LimeSDR and MiniTiouner. The grey box on the left contains a 12/5V DC-DC converter, to supply the Pi and display. The red switch on the base-unit controls DC power to both the base-unit and the Pi3B+/display. If required to switch-on the MiniTiouner only, then the narrow switch to the left of the red one is used. The Spectrum Monitor function has been implemented and is accessible via a TNC socket on the base-unit front panel. For a Portsdown4 version, one simply uses the Pi4/display unit, which is mounted in a SmartiPi Touch 2 case. 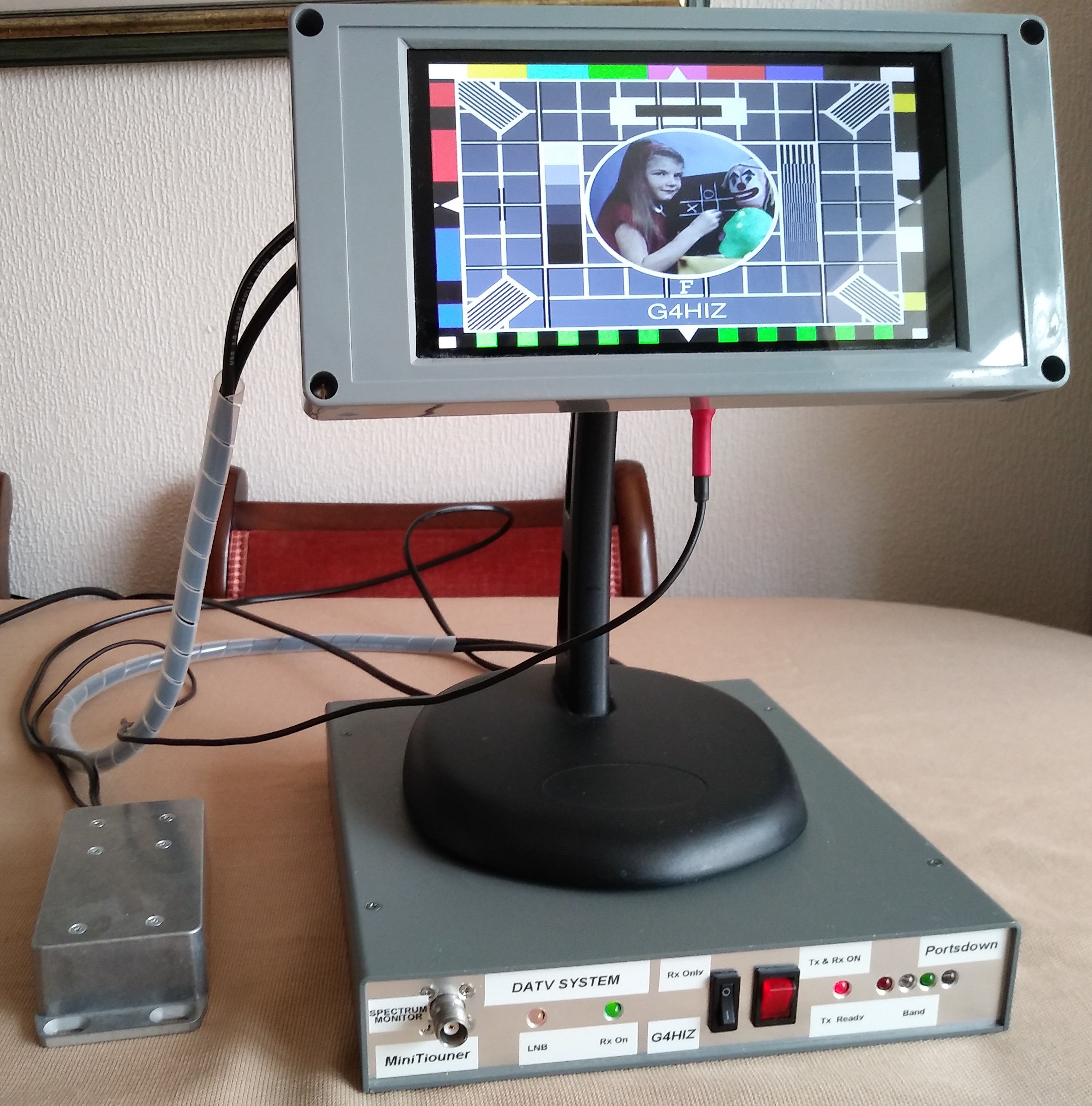 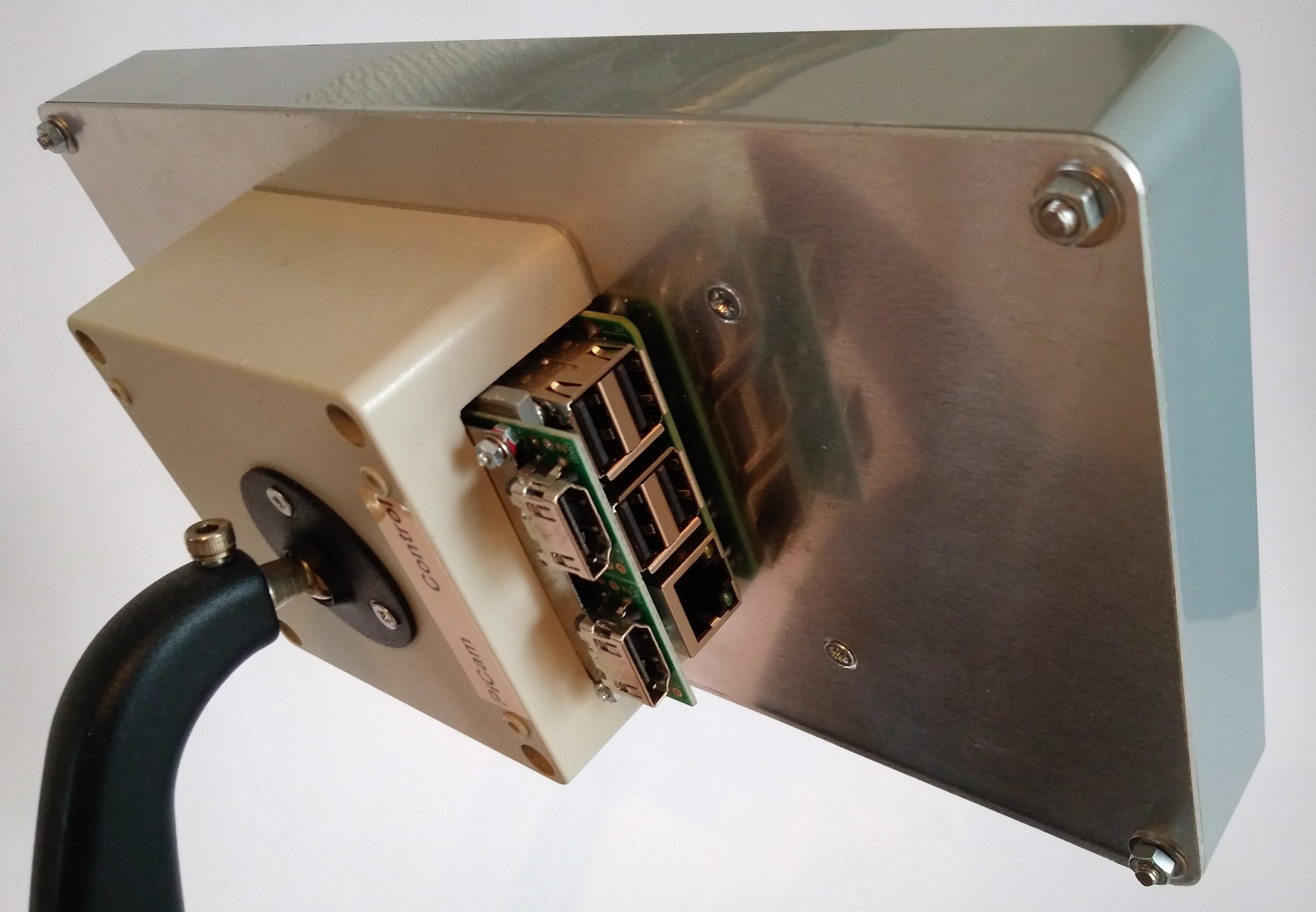 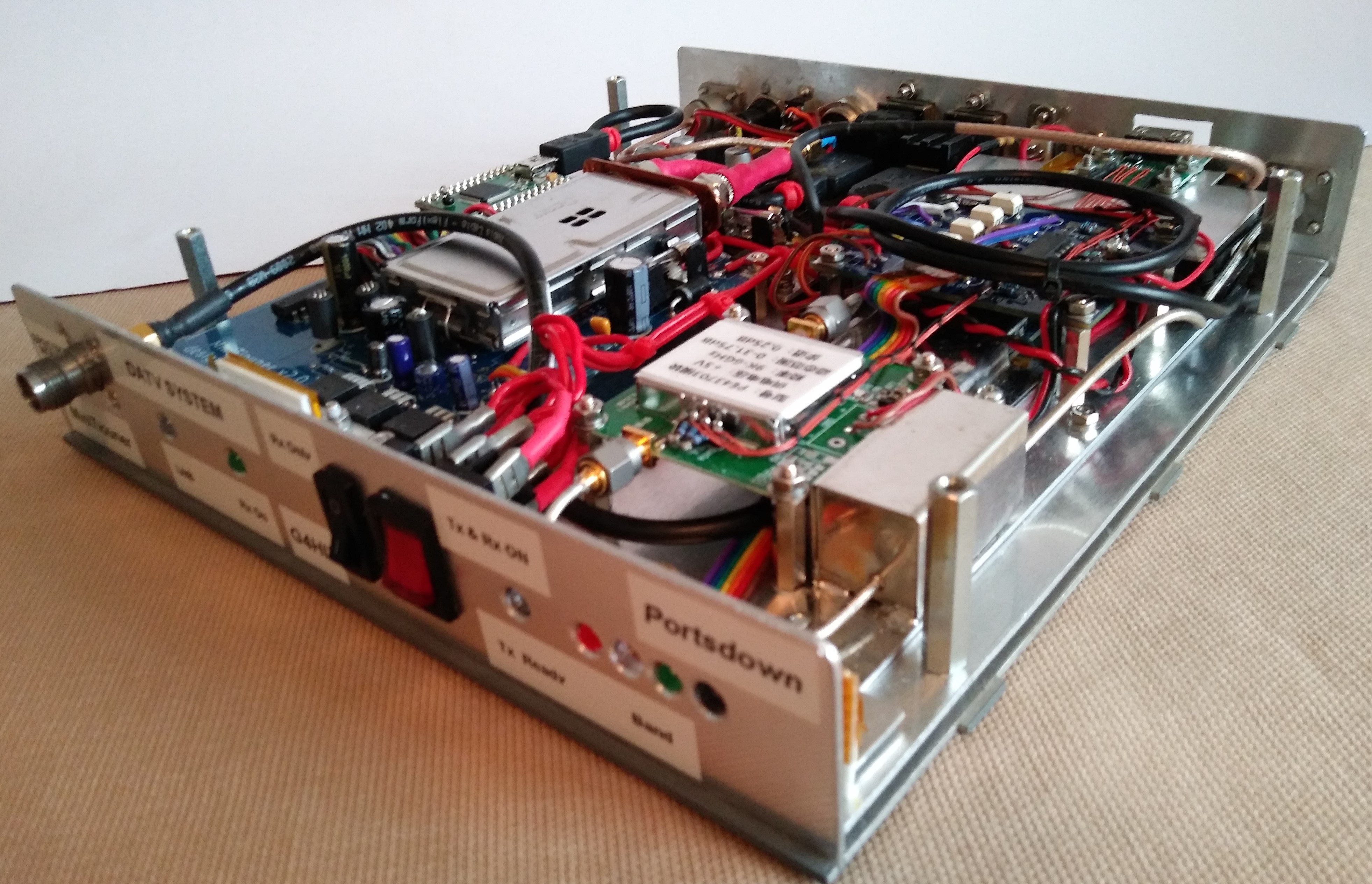