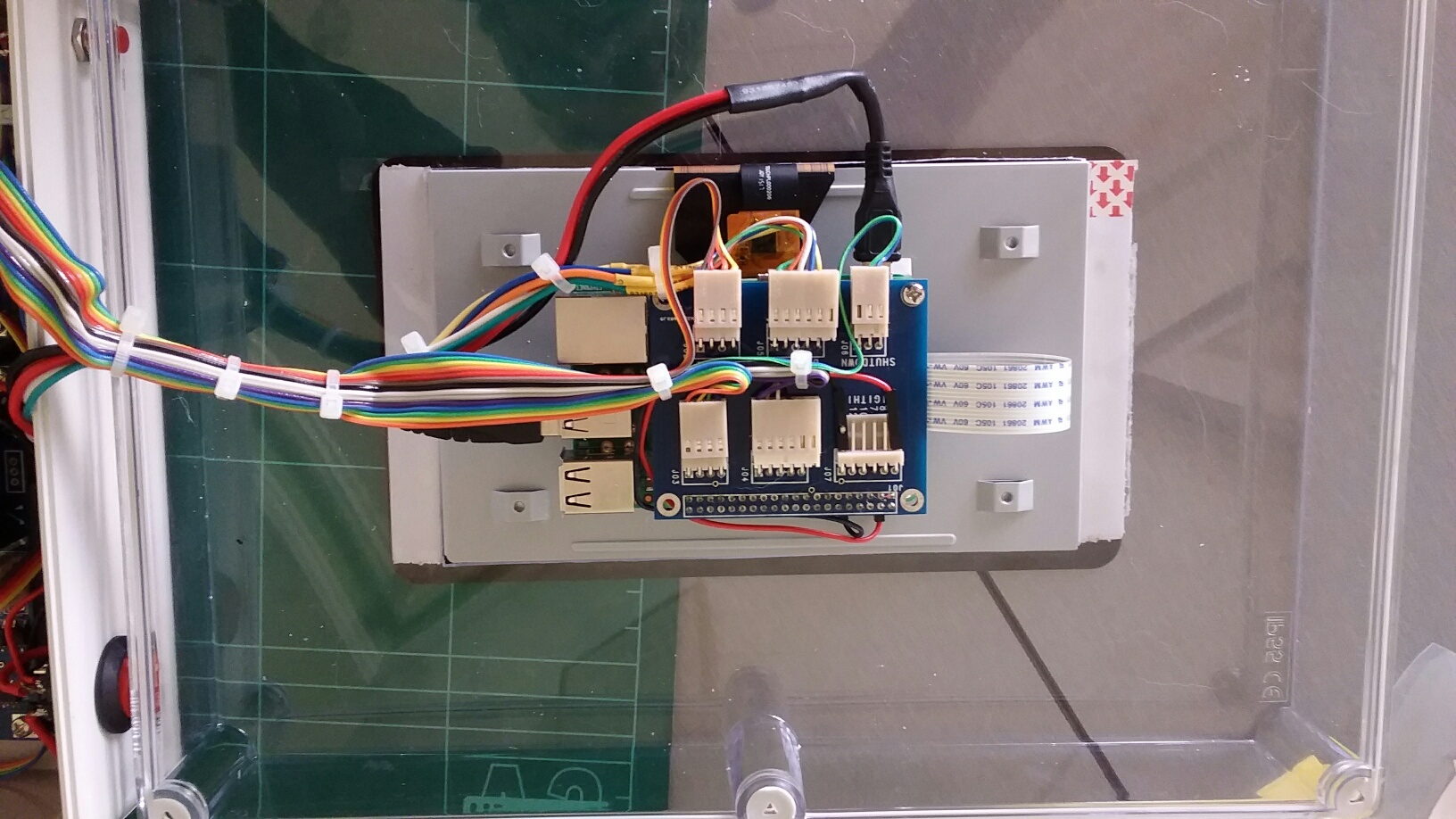 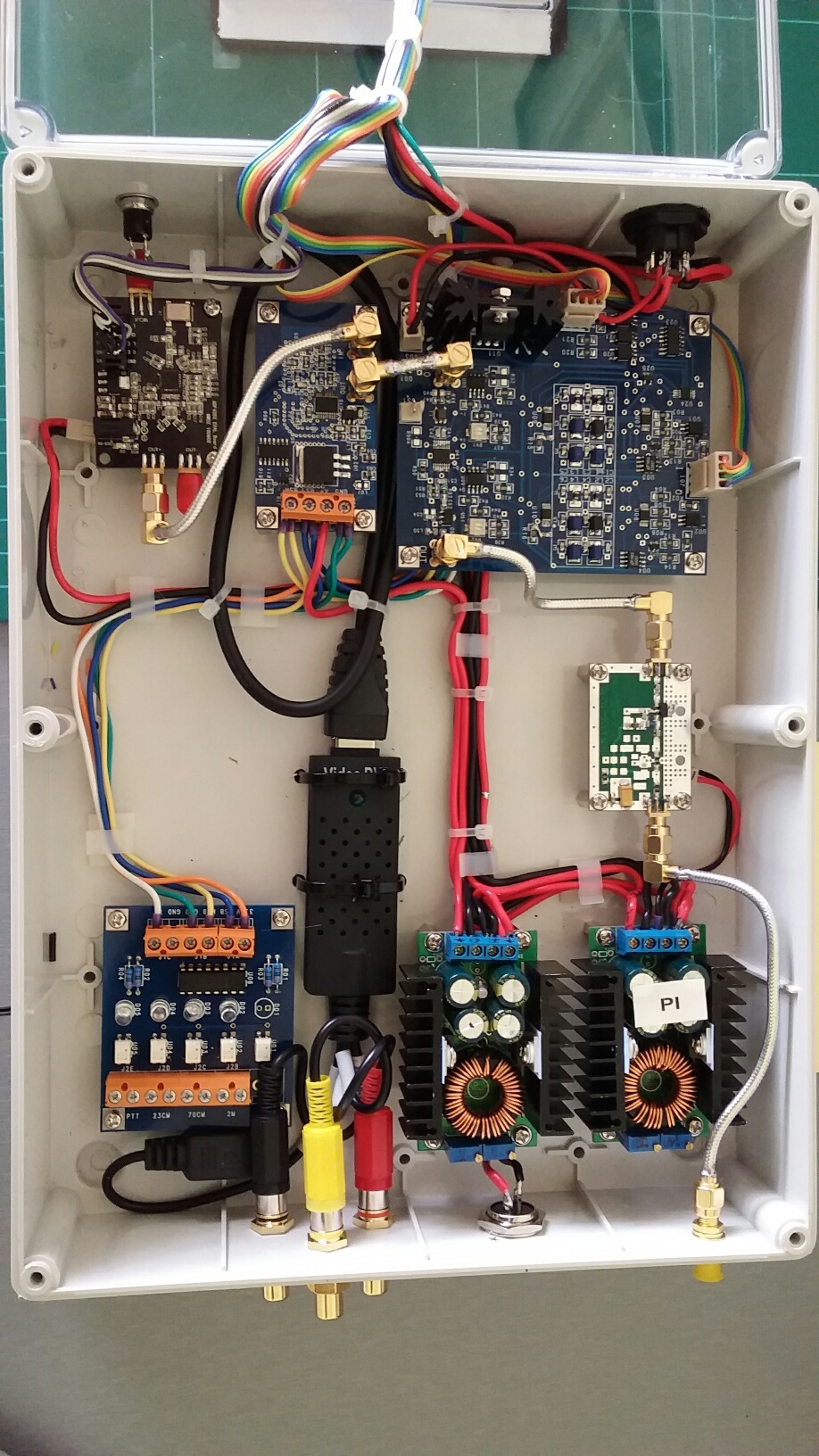 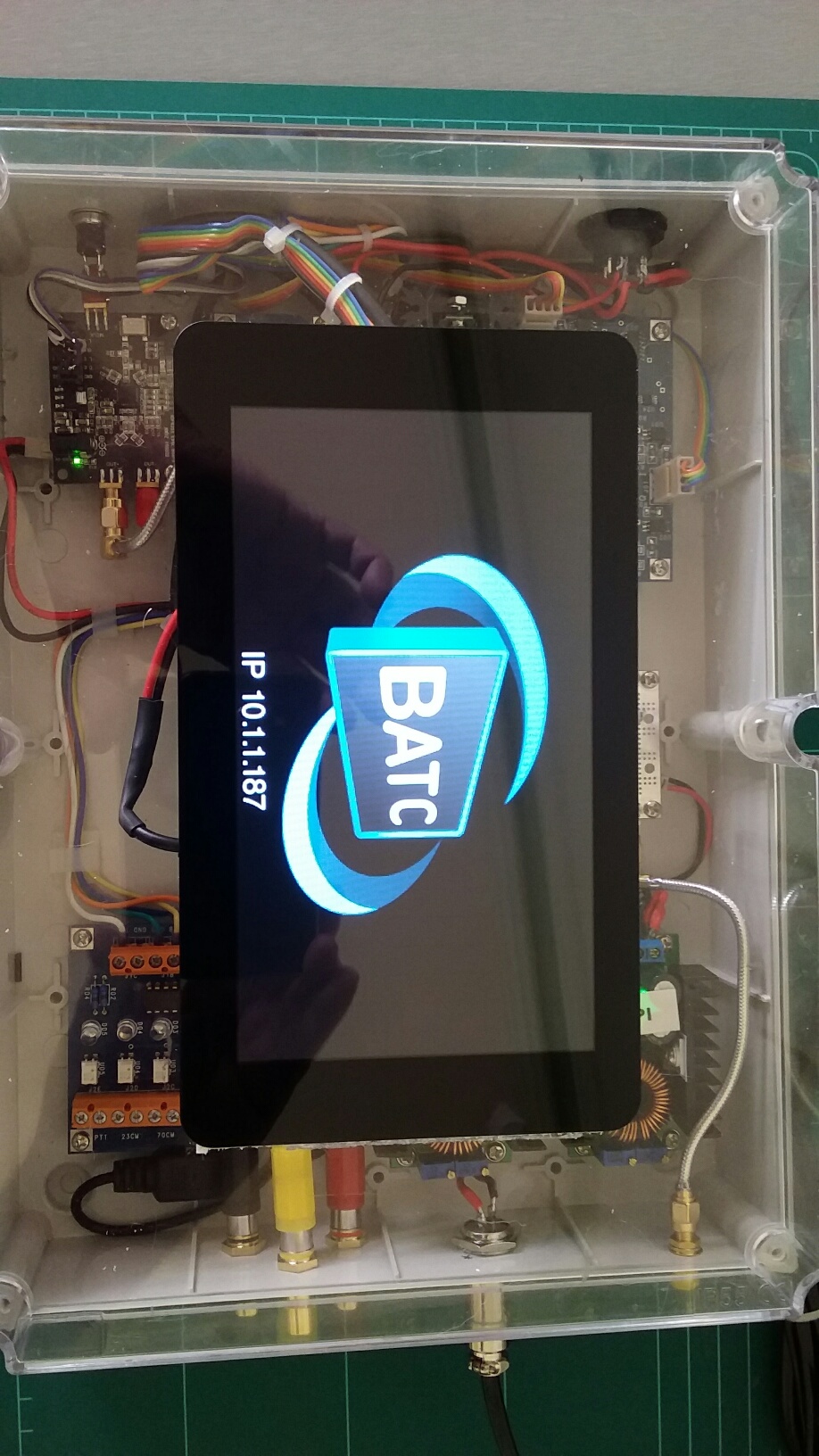 Not quite a success story (yet), but progress - and successful in the sense that I managed to get this far without b*ggering anything up (we'll brush aside a slight issue with L10 on the LO filter board...

I'm now at the point where I need to join all the bits together and devise a suitable layout inside the case - this, mainly metalwork task, might take me a while as I'm up to my eyes in extensive house DIY when I'm not at work, at the moment. With that in mind, once I have the tx working properly, I might nip up the hill and arrange some on-air testing before its boxed up. Watch this space, as they say.

EDIT: I tried to attach pics of the pcbs, but for some reason, although the post looks (or rather, looked) fine in preview, it lost all but one of the pics when posted - and therefore the caption(s) didn't make any sense. If anyone knows how to insert (inline attach) multiple pics successfully, please let me know... 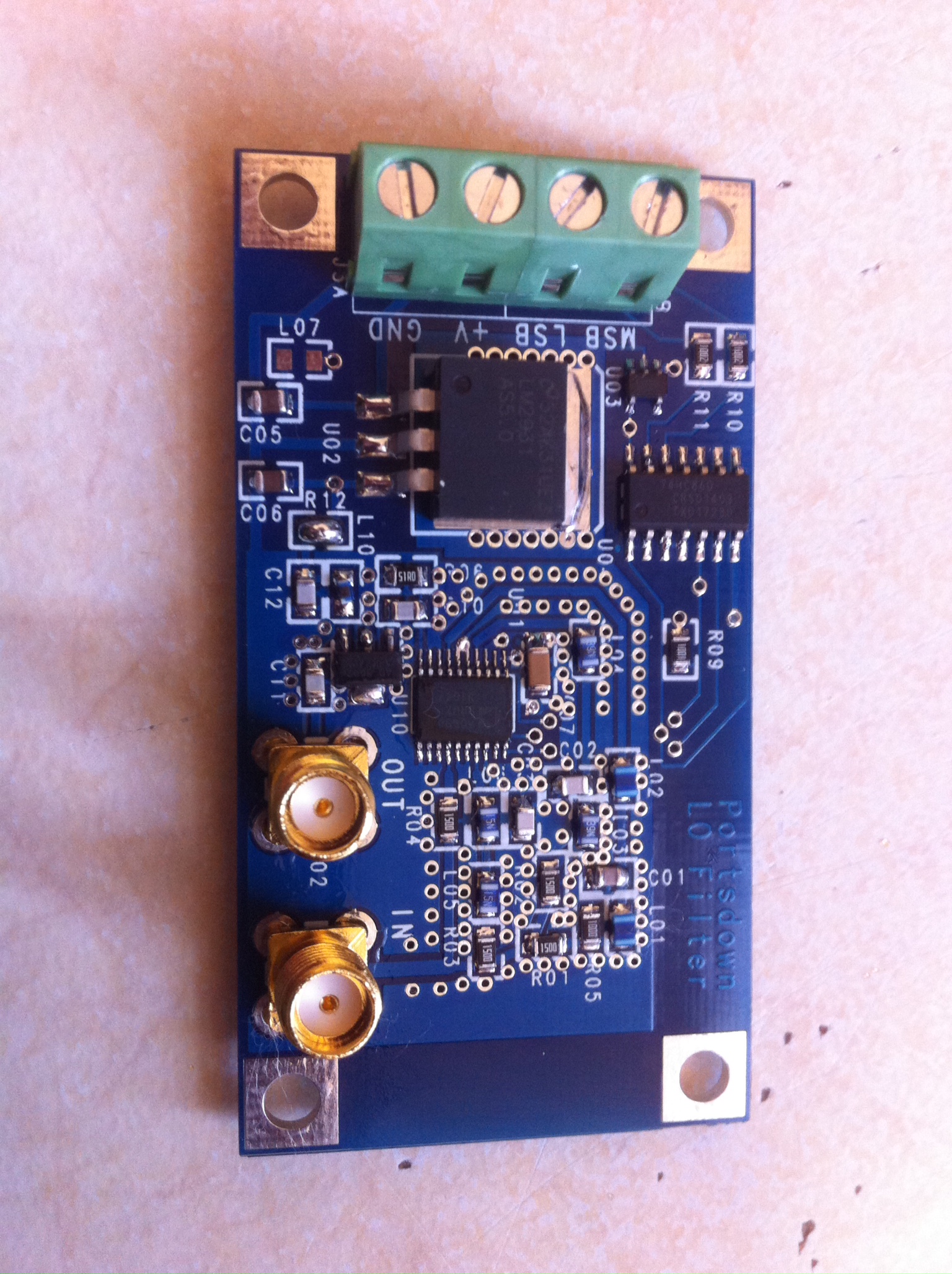 I too have struggled with multiple pic uploads...There seem to be two routes to doing it but neither is intuitive!
Top

One of the objectives of The Portsdown Project is to use ordinary antennas across town. Tony G0AZQ and myself managed to transmit and receive a 2M signal around 10 miles this evening. We both used 2m/70cm colinears at no great height. I live at sea level and Tony isn't much higher. Tony sent a signal at 333Ks, via a 16W PA. I received a solid signal on a MKII Minitioner without a preamp inline. No great shakes, but it does demonstrate proof of concept. Test Card & Picam image rx fine. Good constellation, but MER low (not sure if Minitioune Software is a bit mean!).

Next stage is to repeat on 70cm, however we failed at first attempt. Preamp definately needed using this lash up. Will reverse the route when my PA arrives. Saving 23cm until GB3EY hopefully gets resurrected.

Re: Success Stories - Portsdown to MiniTiouner across the shack 23cms.. 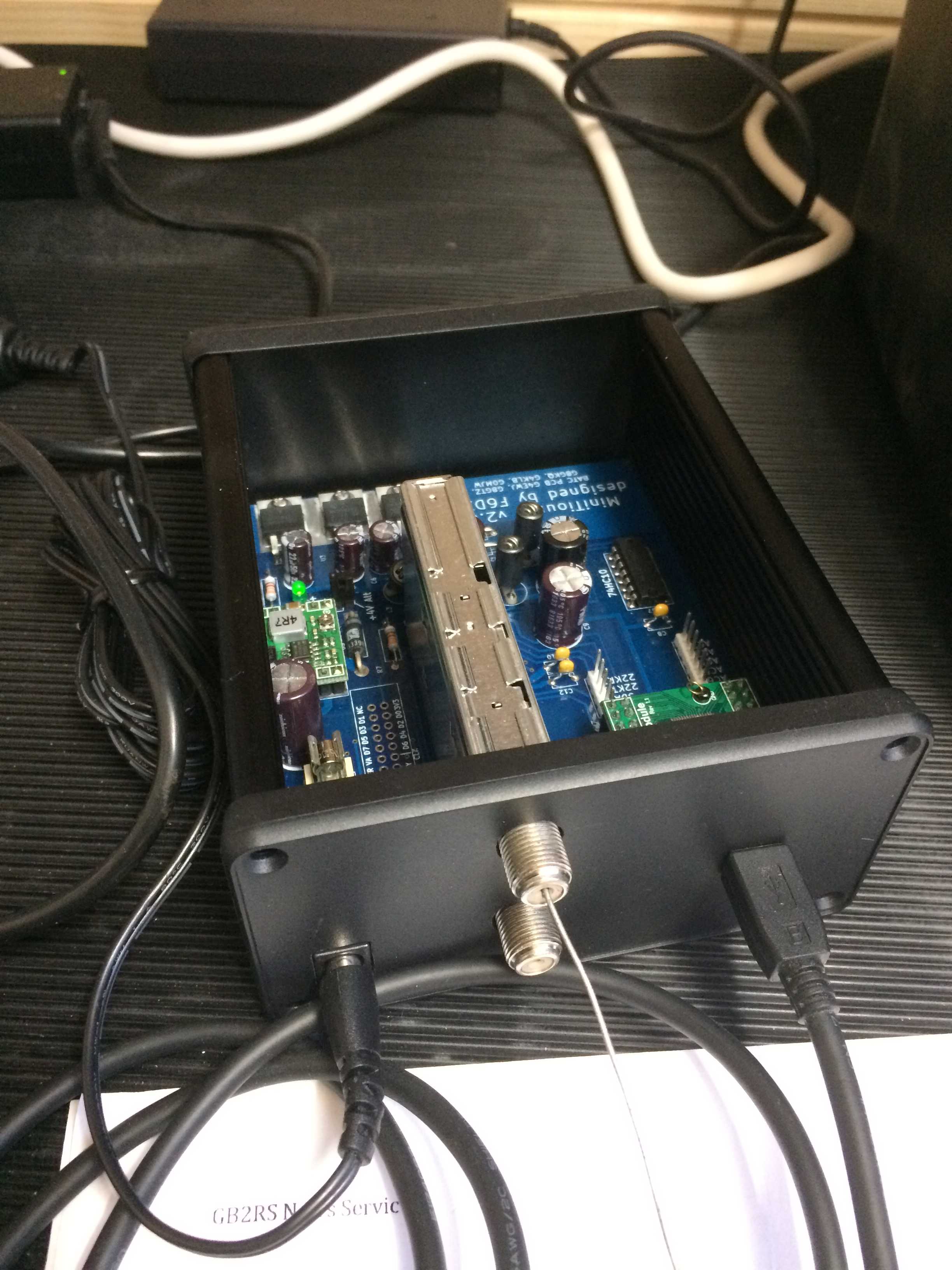 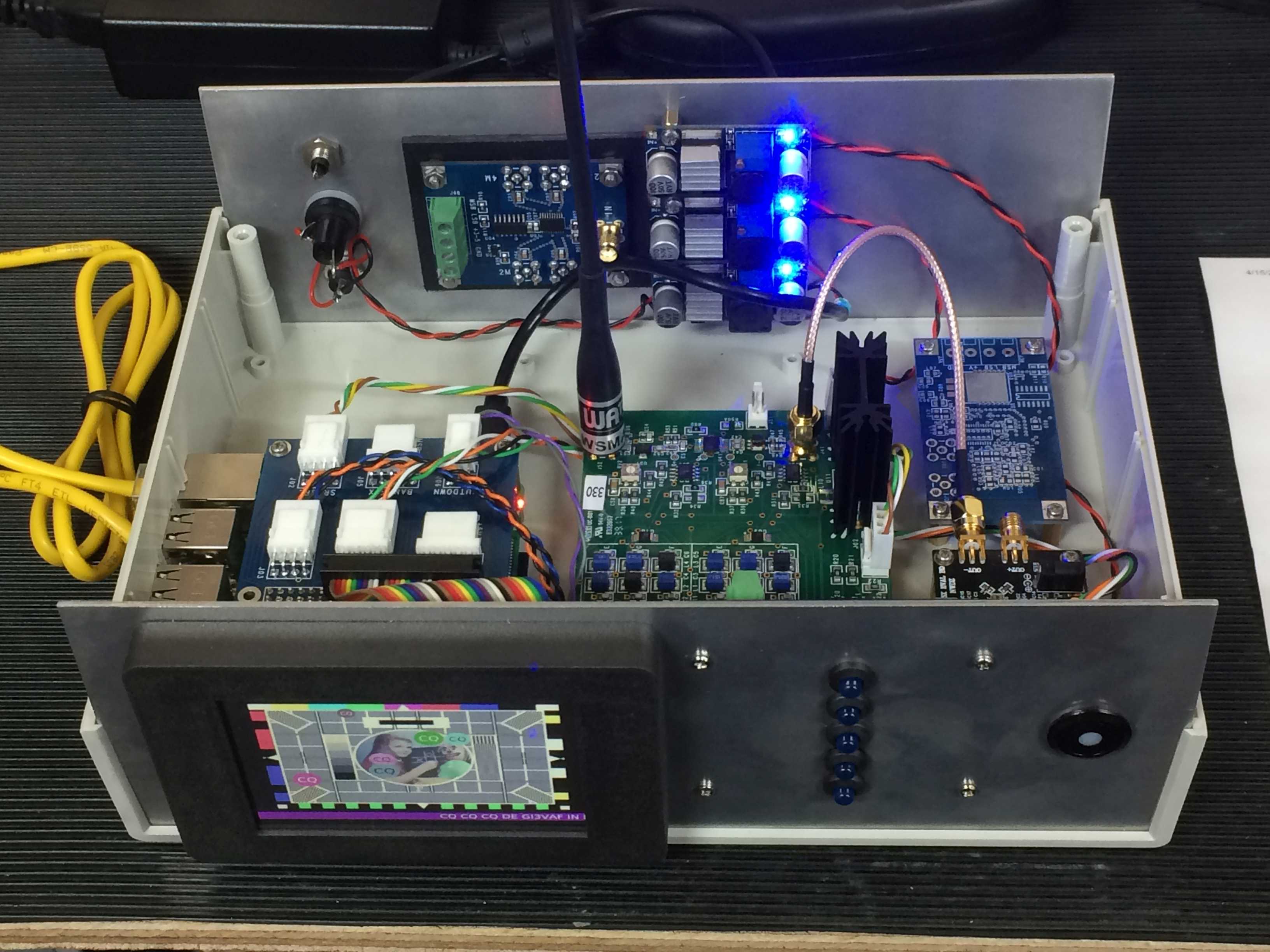 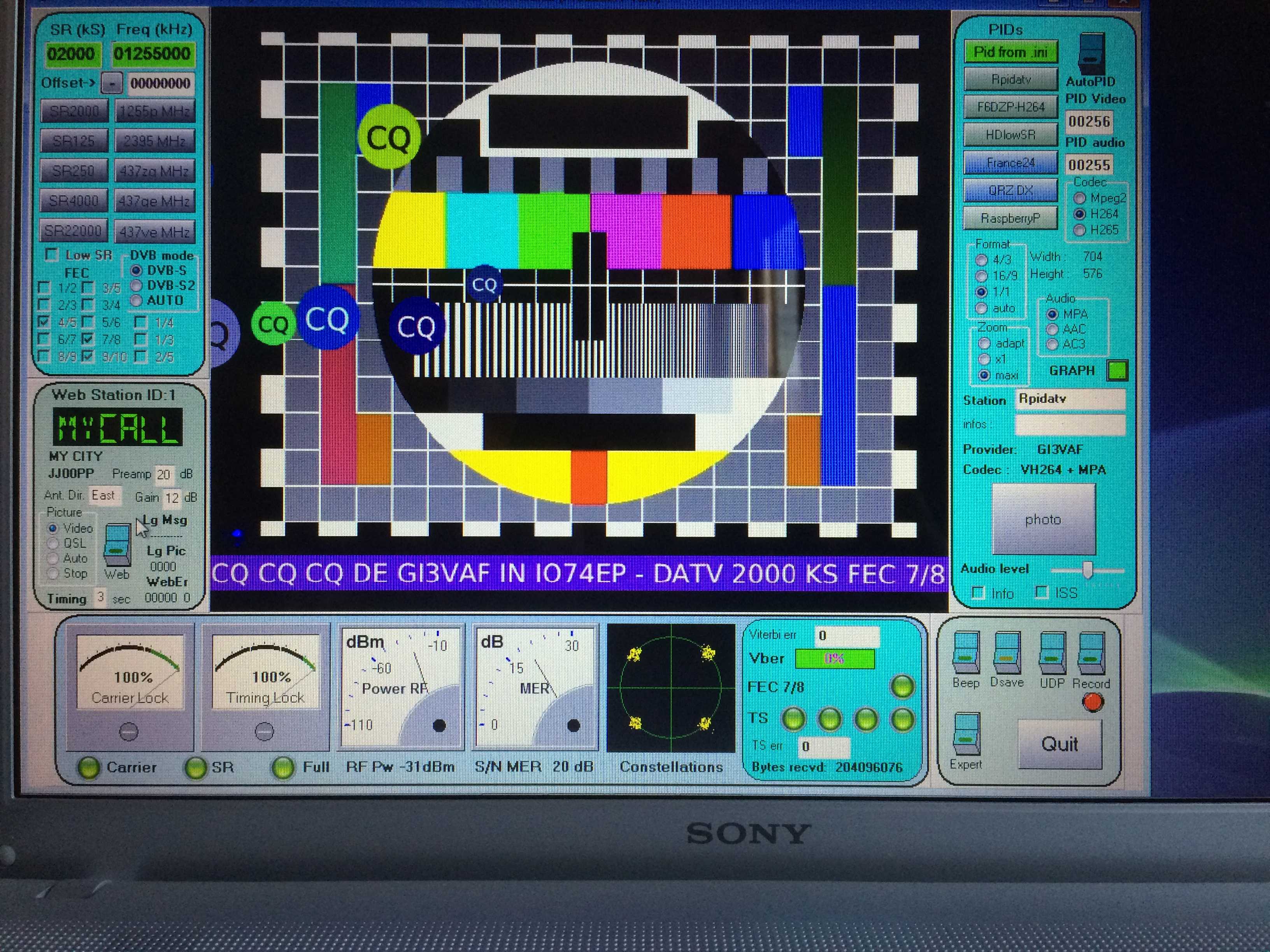 Yesterday I sent DATV on 437MHz 333Ks/s to Dave G7MEG a whole mile away and, after a while / hoisting the mast up to max height, he received my test card then Pi Camera pictures on Minitioune. Well done Dave

I'm cocker-hoop. That was BATC activity day in Wolverhampton - the first one in living memory. Here's my gear in action. 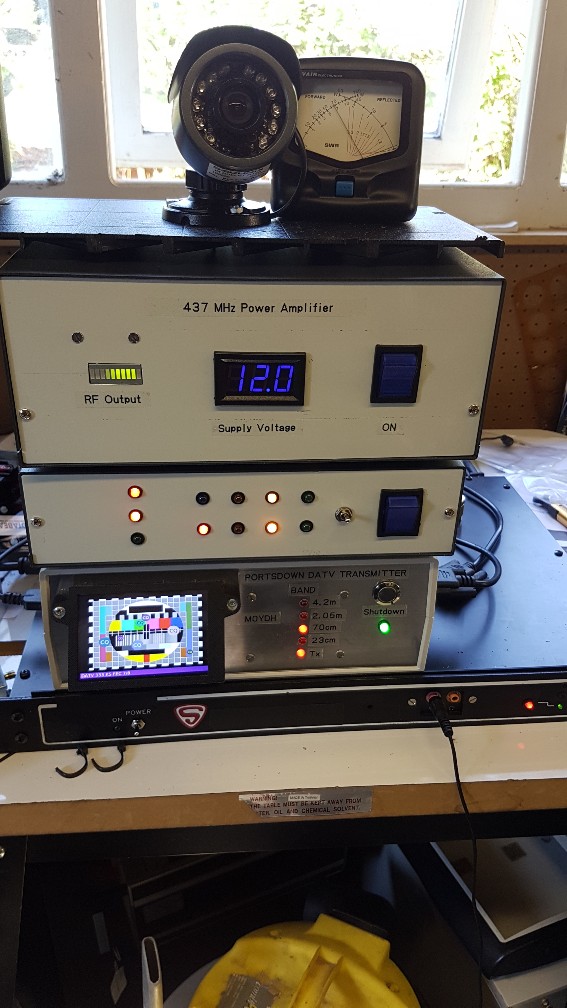 Hello All
I've made a Portsdown 2019 with a 3.5" screen so I can have composite video out for FM transmitter use. 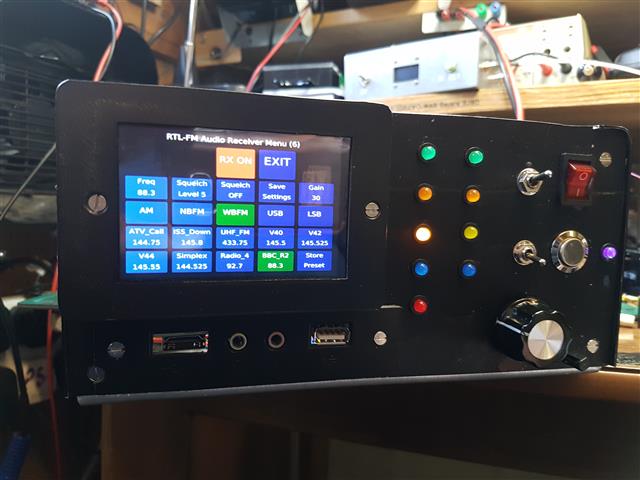 . The bezel is printed by Gareth G3XAT which provided the near net shape and needed rebates cutting in with a router plane and a 30 thou styrene packer to remove lost motion on pressing the screen. Below the screen is a circuit card from a scrap PC with USB sockets and microphone and Headphone sockets. I've replaced a USB with a HDMI socket card from Tindie RPi Camera HDMI Lead Extension Kit. a 30cm PI cam extension ribbon is used. The Portsdown was receiving BBC Radio 2 on FM during the photos [after I'd found that the audio from the RTL SDR dongle comes out of the headphone socket when the USB sound dongle is connected!].

I made the case from aluminium lids out of scrap 19" rack cases which were anodised black. It's 320 long by 220 wide by 110 high. for neat wiring runs you would need an enormous case and start with larger sheets of ally than box lids! I bought a rivnut set and extra M3 rivnuts to make the connections between sides. Folding was in my woodwork vice over a section of industrial aluminium window frame so I worked with the resultant bend radius when fitting the front and end panels. 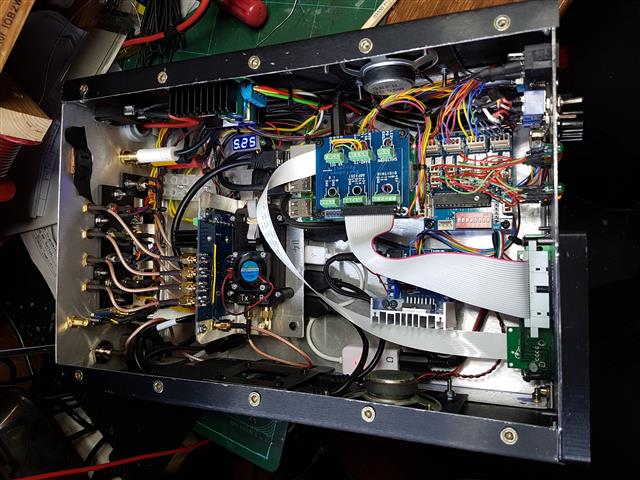 The arrangement of the ICZI brand 7 Port USB 3.0 Powered Hub at right angles to the RPi 3B+ with a the Lime Mini SDR on a bracket over the hub that carries the 8 way RF switch seems the best way to get all these components in the right orientation and cope with the awkward, stiff nature of USB leads.
I haven't fitted the attenuator that I have yet. The RF switch isn't amplifying at the moment so a re-do of all the soldering on this card is imminent.
8 band decode is fitted and fully wired to a bank of RCA sockets [on a plastic sub-panel]. I also have LSB, MSB, T, PTT etc on a Sub D connector for use with my Tx/Rx relay changeover controller. The EASYCap and RTLSDR are held by a bracket with a nice joggle in it to the side wall. 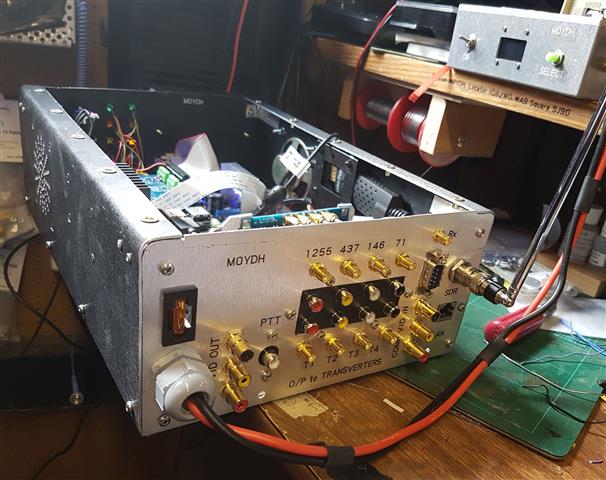 Portsdown 2019 just uses two voltages ie 12V battery and 5.25V everything else. The single buck converter I found that works well (as far as I can tell) is described as DC-DC CC CV Buck Converter Step-Down Power Module 7-32V To 0.8-28V 12A 300W on Ebay. A small LCD voltmeter advises what it's up to. Mostly it displays blue no load light and changes to red on the Pi executing commands, going into Tx or running the audio amp. The converter is wired for -ve and not connected to chassis as its current load sensing is in the negative line.

The audio amp is described as TDA7297 AC/DC 12V 2*15W Digital Stereo Audio Amplifier Dual Channel AMP Module C on Ebay and is a bargain at £2.15. It drives a pair of 8 Ohm speakers. I originally thought that the audio from the RTL SDR comes from the composite video out on the RPi and took this to a double pole switch so I could send it to the loudspeakers or the composite video outputs. RTFM on the Wiki.

I hope that's interesting and useful to other builders.

Thanks to Prof Portsdown - Dave G8GKQ 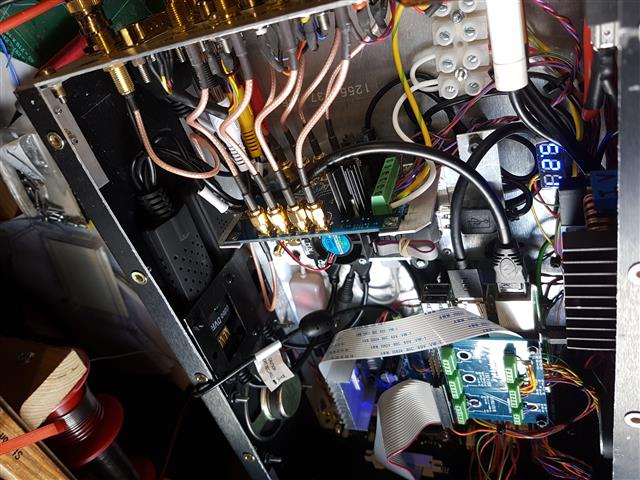 Please see below a few photos of my latest Portsdown 2019. The Pi and Lime are treat as two separate blocks with their own power supplies, with a switch-mode PSU for the Pi and Linear PSU for the Lime and they can be switched on/off independently. The Lime also has a USB socket such it can be connected to the Pi normally, or to an alternative computer if desired. For possible future use, the Lime Rx input is taken to a rear SMA terminal.

The Lime is powered via a hub and to ensure that the Pi cannot power it, the track with the series diode supplying power from the host is cut. To note that, at switch-on the Lime takes about 230mA and on transmit takes about 500mA. The Pi current can vary considerably, but typically 250mA was measured with no dongles and not taking into account any transient current demand due to intense operation.

The build has a 4-way band select board and a programmable attenuator. The display cable is taken out through the front panel so that the display is optional. The display itself fits snugly into a die-cast aluminium box and sits on spacers. For console control, the display can be detached.

A special feature is the ability to switch-off the Lime via the Pi. A series FET switches the Lime power supply off when a little-used band is selected, although this feature in itself is selectable via a link, so making the band available at other times. This provides the ability to remotely reset the Lime if it hangs-up. 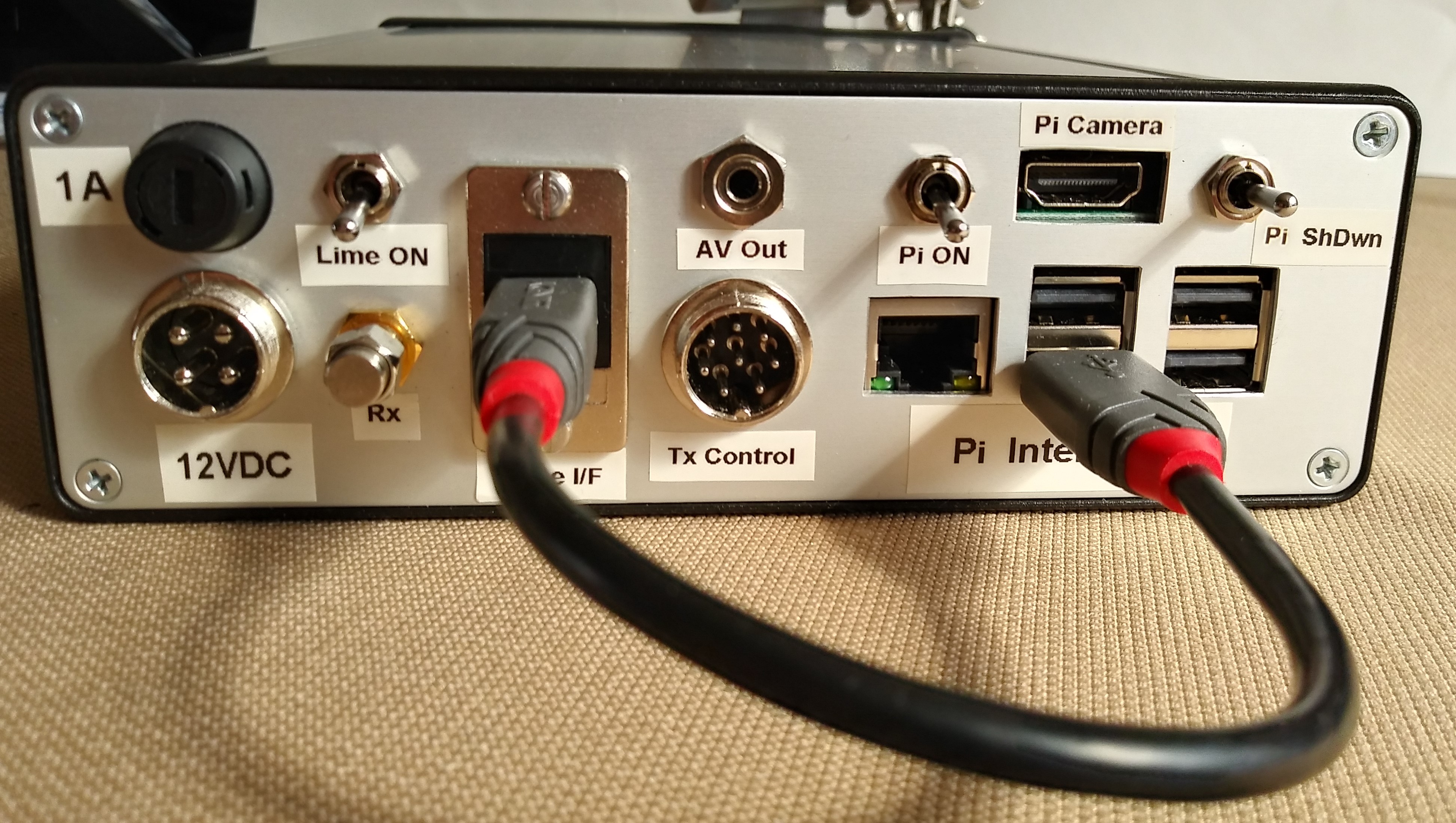 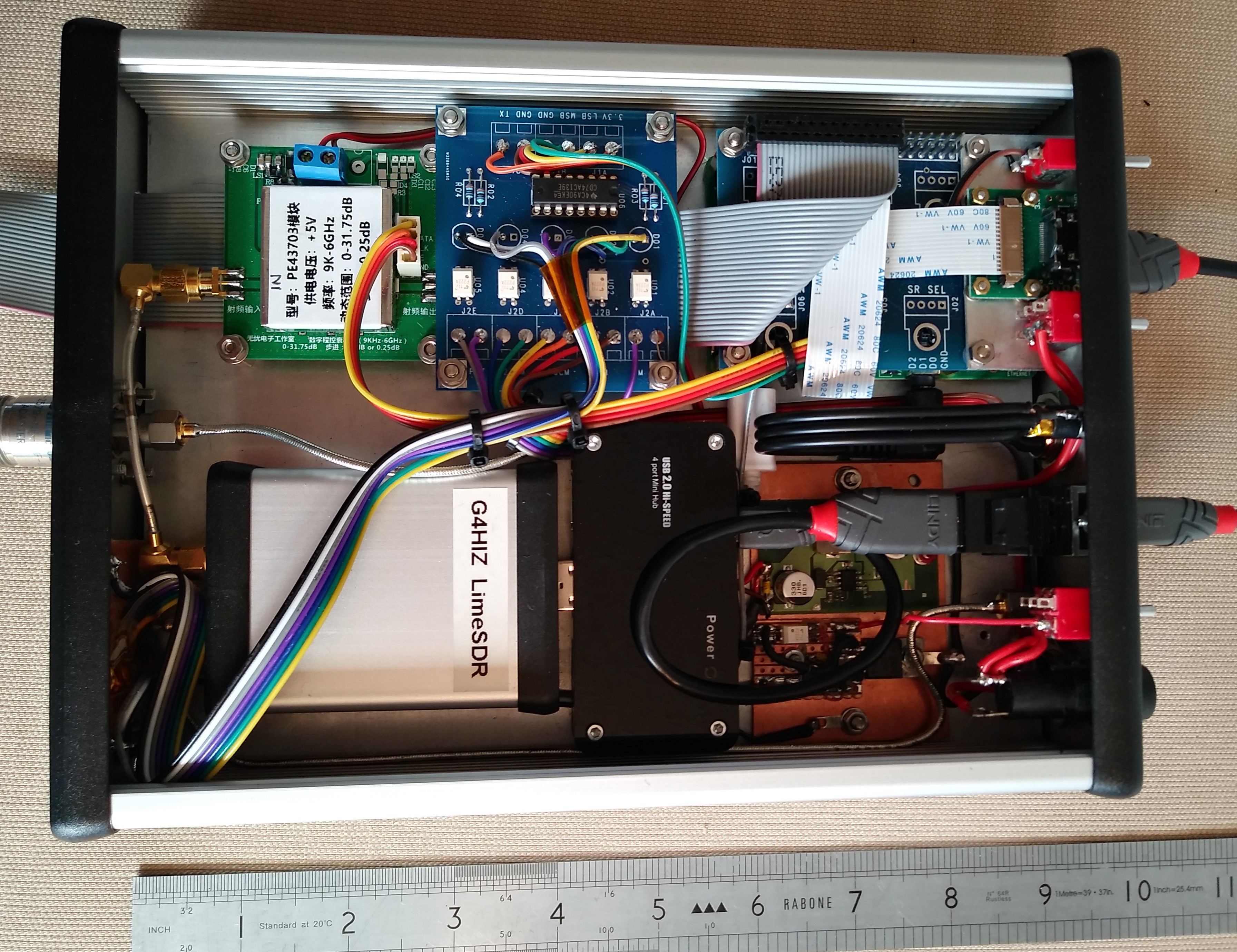 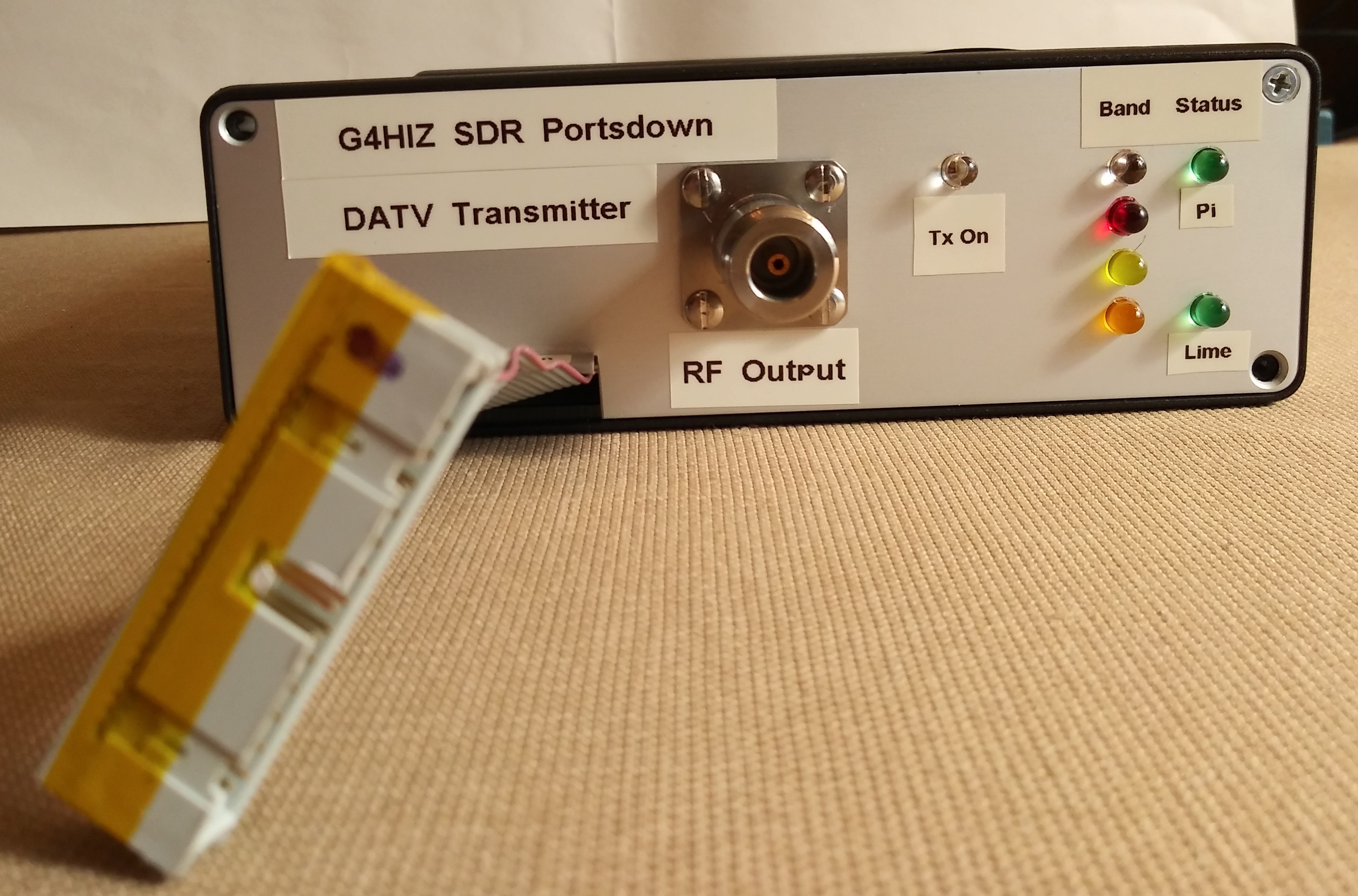 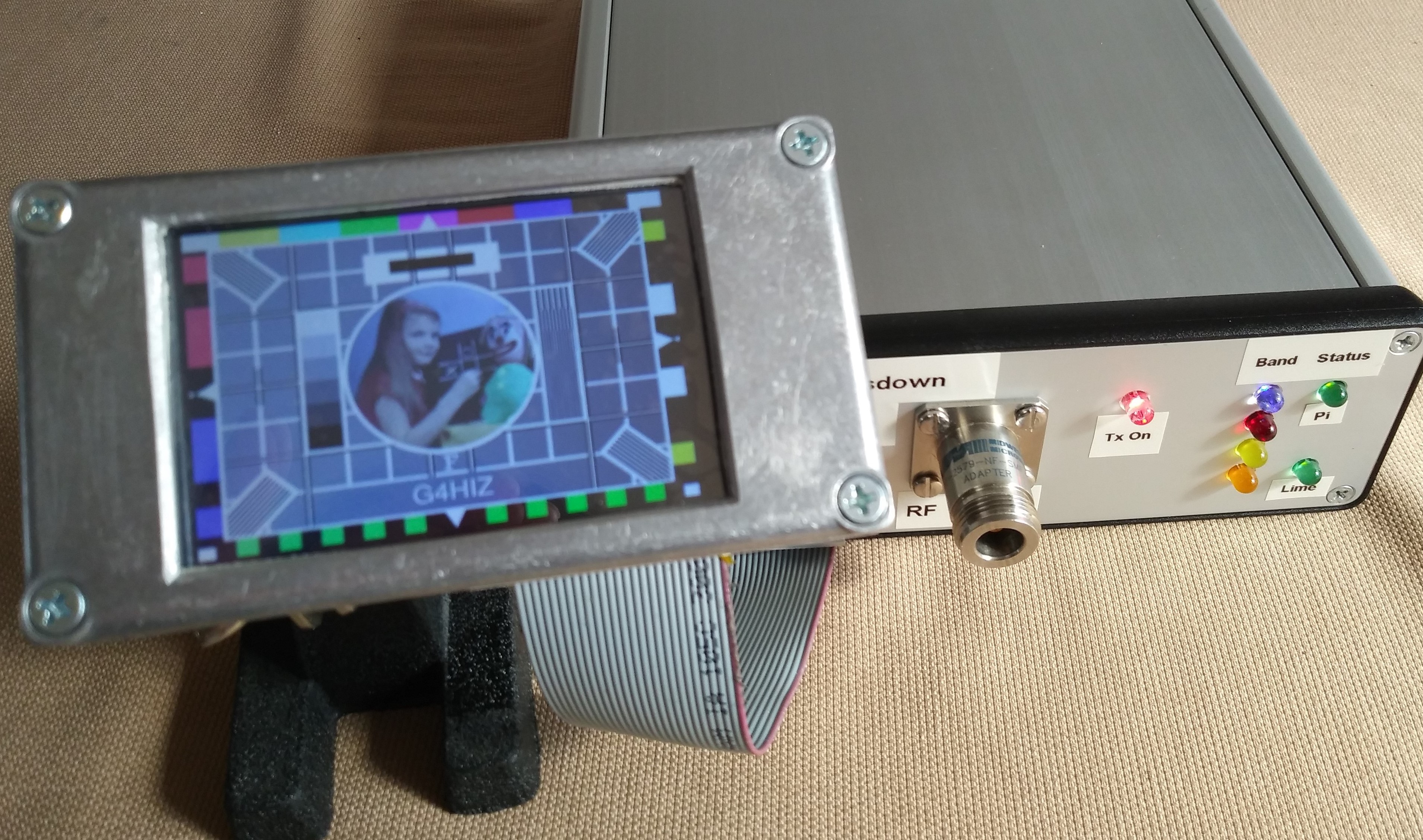 Hello all
I thought I'd revive this splendid thread of Portsdowns. There are some startlingly neat builds like Jen's in the previous post.
Pictured is my Portsdown 4 which won the Telford & DARS 2021 main construction competition in March. 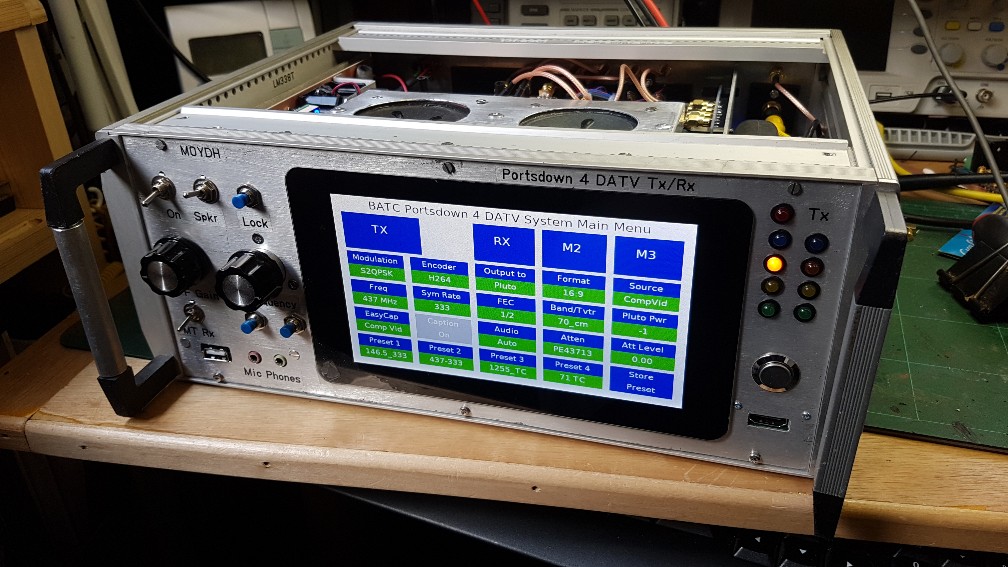 I found the largest enclosure I could that had been a Magnetech MIF1 integrating fluxmeter [carefully removed, intact and free to a good home at cost of P&P]. This has a sub chassis in a channel shape giving a bay on the right and two internal, vertical walls

It's a full Portsdown ATV system with a Pluto SDR, 8 way RF Switch and band decode, Attenuator that may or may not be working after last month's software updates and a two way RF switch. The SR Switch lines D0, D1 and D2 on the GPIO card do change to all logic high when a Lime Mini SDR is selected.
I have a power supply card on the left hand wall. Reverse polarity protection is via an N-Channel MOSFET. 5.2V is via an LM338T with a thermostatically controlled fan. A Noctua silent fan is on order! Current draw with audio amp amd Minitoner on is around 2.5A which is about an amp more than with a buck converter.
On the ground floor is the powered USB hub, ugly USB cables and the upgraded Minitiouner V1.0. I followed Dave G8GKQ's article in CQ-TV 267 with immediate success. So I've a nice, flat receiver with its own power switch in case of Knuckers lurking about. First floor has the Pi4 with a fan shim [ please may we have a fanshim setting in the software?] and the club GPIO break out board on top wired per the GPIO Wiki page. Also on this floor are the audio amp for the speakers, the Langstone Mouse micro controller for the rotary encoder and switches and the 8-band decode. RF devices are on the right wall and the Pluto is in the bay [Hades?] with the EasyCAP dongle. The latter gave me the run around with poor, blue dominated pictures. I changed the buck converter for the linear but it was a loose RCA coupler all the time. Grrr. For 71, 146 and 437 MHz I made a circuit card with RBP-75, RBP-140 and RBP-440 bandpass filter from Mini-Circuits EZ samples program. These are really good little filters with low insertion loss at about £15 each and worthy of a club PCB [Hint hint and I'll supply a set for testing].
I did try the Lime Mini via the 2 way switch but something went wrong and the 8-way RF switch seems to have taken damage. I built a new 8-way which worked straight away and am reticent to reconnect the Lime into the P4. My older Portsdown can have the honour of Lime connection.
I did try to be as neat as possible but it's turned out cramped. I wonder which unwrittten rules known to microwave RF sages I have broken?
I hope this is interesting and helpful to others. Are there any other full Portsdowns out there? 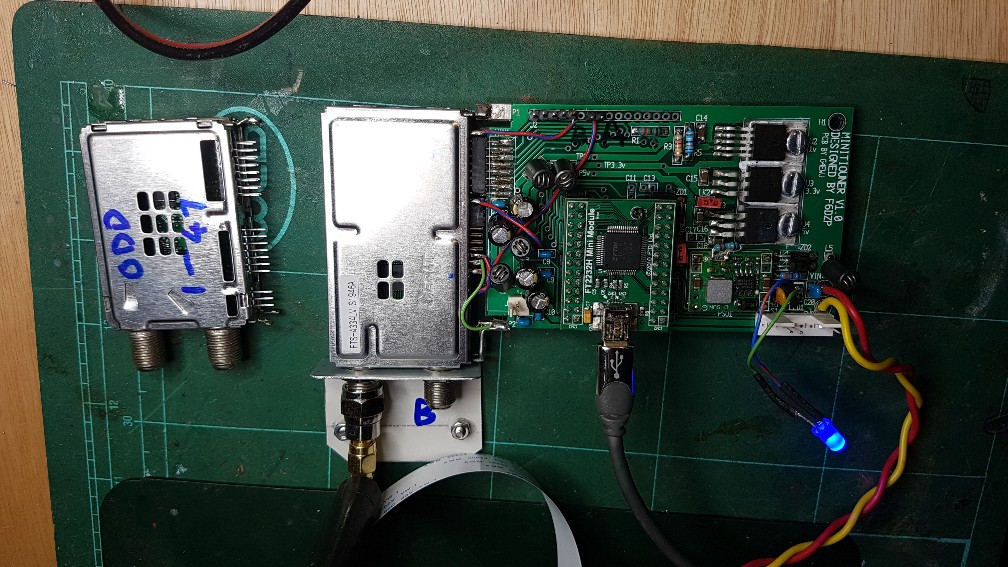 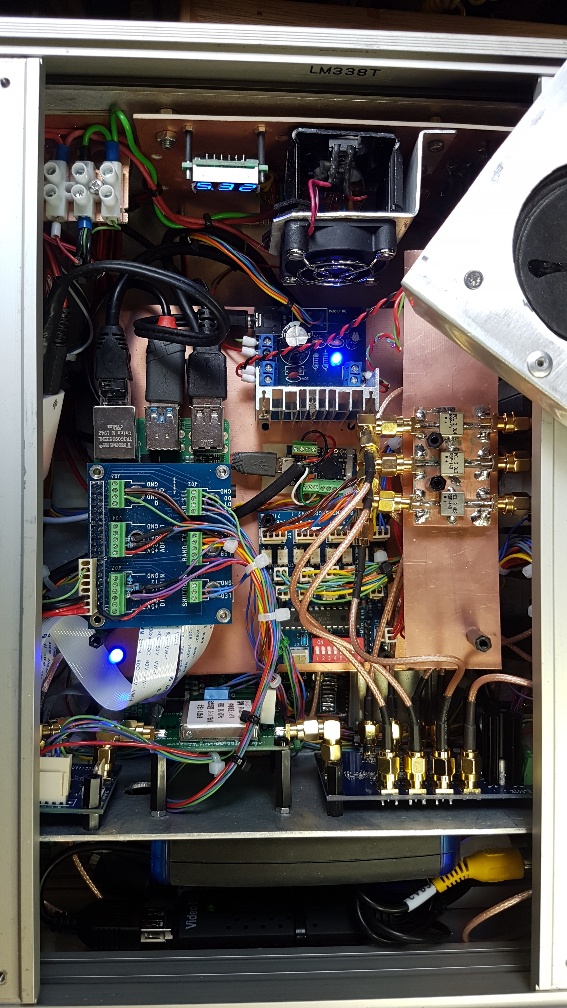 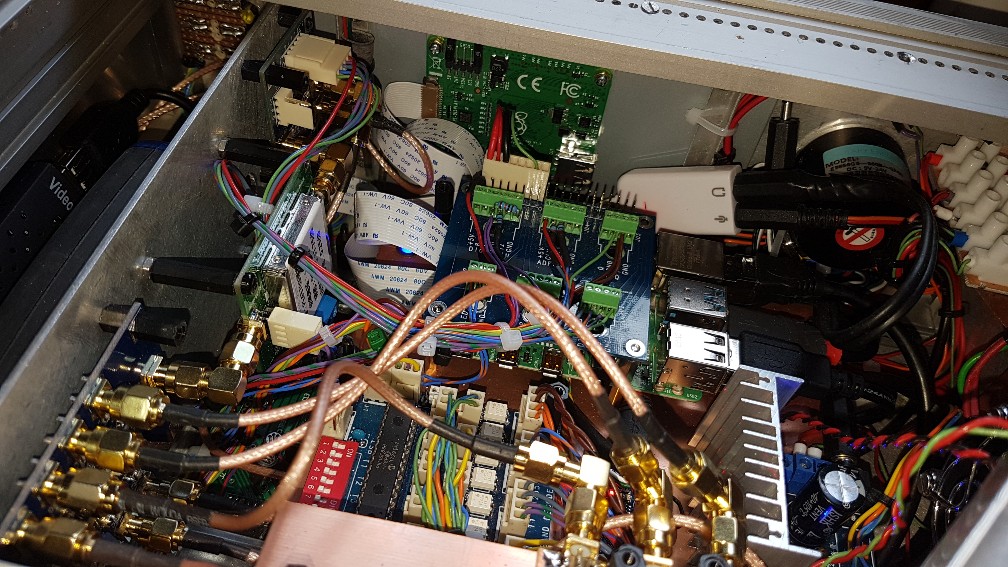 Nice build, I'll post some pictures of mine when I take some, My case is much bigger than yours so gives a chance to have some room to work. I don't have a Minitiouner in the case even though there is room for one if I decide to go that route. Still very much a work in progress as you will see in due course. Desperately trawling the used EasyCap's on Ebay to try and find one with the Fushicai chipset as I have a composite output camera on the end of the house I'd like to connect and I've had no reply to my wanted ad on the forum.