g0mjw wrote:The test boards have arrived from PCBway earlier than expected. Not bad for $16 shipped. The vias are so well implemented I had to use a torch to check there really were holes there. The silk screen looks good. The jury will be out on the design until I get all the parts together. I have already made some improvements to the board design. Even thought about putting the LO on-board using one of those 400MHz LVDS chips, but it's probably best and more flexible left as it is.

The mixer has arrived from EME Kits and the board worked. I have about 5dB net conversion gain from 70MHz to 470MHz with a 400MHz LO. There is a 6dB pad in there so higher gain is possible. It also works at 50MHz with a little more gain.

As I suspected, the tight output filter design I had intended to kill the LO leakage and any images wasn't on tune with the calculated value parts above. That's most probably due to PCB lead inductance, which is significant (5mm track == 2nH) and PCB stray capacitance. I replaced the resonating capacitors with a Murata SMT trimmers and found it easy enough to tune the output filter. I have already modified the PCB to allow trimmers to fit. Of course the inductors and capacitors could be recalculated to compensate but that would take a lot of fiddling. In practice, the result was pretty much what I wanted covering 450MHz to 470MHz and dropping off fairly quickly either side.

I measured volts/metre using a resonant dipole into a calibrated log detector board - it worked fine so I hope they will accept that as a good figure.
I have a 5/8 vertical on 70.450 and fed it with an accurate 10 watts. The field strength I measured at my boundaries was -5dBm or 125mv/m or 102dBuV/m.
Has anyone managed to get an NOV yet?
Top

I use an old commercial upconverter which uses a LO of 1.15GHz at +7dBm which gives me an output at 1221MHz and a gain of 23dB. It gives good digital pictures on the minitiouner by sending to it via a stack of attenuators (90dB worth). All I need now is a good tuned preamp.
Digital signal from portsdown on 71MHz SR125 FEC2/3
Top

As posted on the other forum - the 70.5-71.5 MHz NoVs are now instant free issue to all Full Licensees (very similar to the 146-147 MHz ones)
- no need any more for SRP applications

Working on getting get 70MHz rx converter board running. Not that we have 71MHz available in PA-land but for a short RB-DATV test with low power the 70.0-70.5 allocation "has to make do". Just not during Es of course HI.

In the scope of that: the description of the converter board talks about 7dBm "at the mixer". ADF4351 datasheet gives me a max of 5dBm. So... ehh?

While measuring here I find myself looking at something like 0dBm (give or take) out of the Chinese ADF board. Which makes me go even more "ehh...?"

The ADF4351 will give 5 dBm on an Analog Devices evaluation board, but only 0 dBm or less on a Chinese board.

The converter board will still work with 0 dBm, but the converted signals will be at a lower level.

Hi Wilko,
My converter uses an onboard ADF4350 400MHz oscillator. I used one of the boards from the BATC shop to set the oscillator frequency.

You can adjust the ADF4350 output level when you program the PIC; max output is +5dBm and the mixer works fine at that setting. 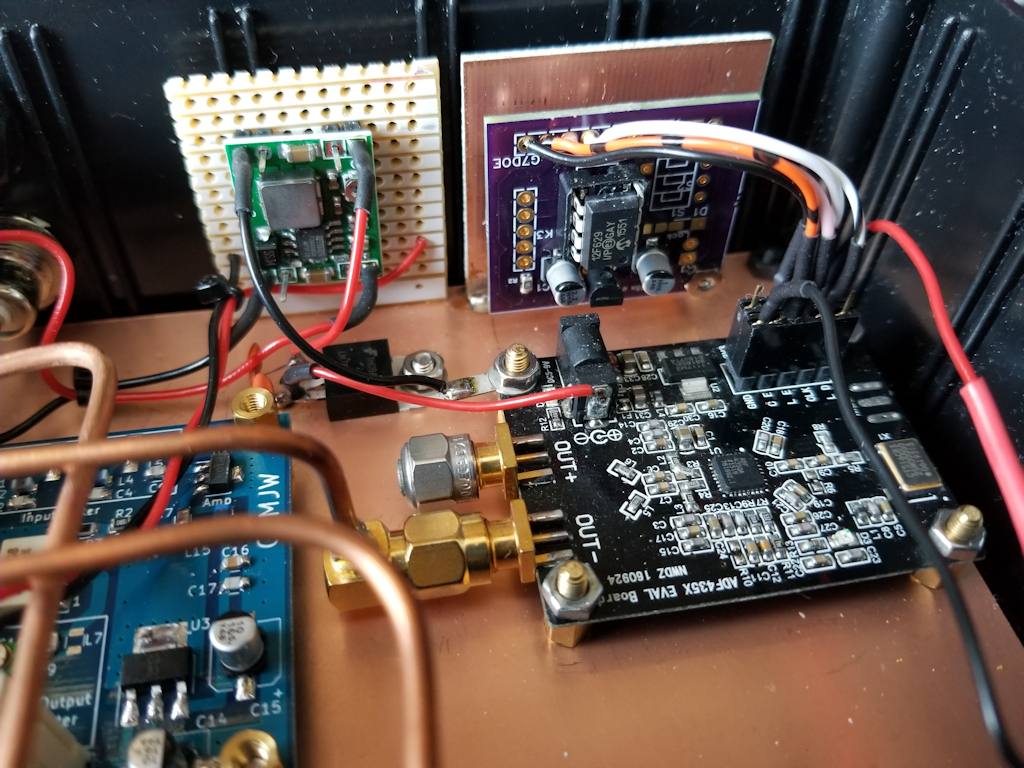 what page number please.
Couldn't find it in CQ-TV 267

There's a brief mention in issue 268 P31; with the suggestion the full article will be in the next issue.