Grrr - despite saying I wouldn't, I have!

On rx I have an upconverter (old 70MHz to 1100MHz unit designed for testing modulators), just needs some gain and a filter - found this which looks nice and easy to build http://pa3csg.hoeplakee.nl/WP/?page_id=62

I even found I had a birdthru line element covering this band!

Just got to sort an aerial - maybe a dipole is a good place to start??

EDIT - just knocked up one of these - http://www.70mhz.org/coaxdipole.htm - seems a reasonable match after some tweaking - not sure how it will work but cost me £5 for the tubing and an hours work so worth a try - but even this is very big!

Oh good, that means at least one station for me to work /portable! I have now built the Spectrum upconverter and it seems work quite well, with pictures from the Express being received across the bench. I have a borrowed Pye filter and lined it up on 71MHz today. It is a really lovely filter with 0.27dB insertion loss and 3.4MHz -1dB bandwidth. I have all the components needed to build the Mitsubishi based amplifier, so that is the next task. I have ordered an Innovantenna 3 ele OWL type yagi, which is lighter and more compact than their other models. After talking to Justin, he is going to cut me a special for 71MHz for the standard price, but it will take two weeks to arrive. With a bit of luck, I might be ready for the next activity day!
73 Shaun.
Top

M0SKM wrote: ↑
Thu Jun 28, 2018 12:02 pm
Arthur G4CPE now has a 4m horizontal dipole on a rotator down the garden and my 3 element beam has just arrived. We were both wondering if anyone else apart from Mike G0MJW is ready to do 4m tests?

On Sunday morning I could be on one of the local hills for a test; either Dunstable Downs or Ivinghoe Beacon.

@Mike From this afternoon Arthur will be ready to test with you.

I can be around tomorrow afternoon hopefully. Was at work today.

What level are the shoulders at 20W output? Seems a little high for a 30W module, I have a 5 element beam for 4m. 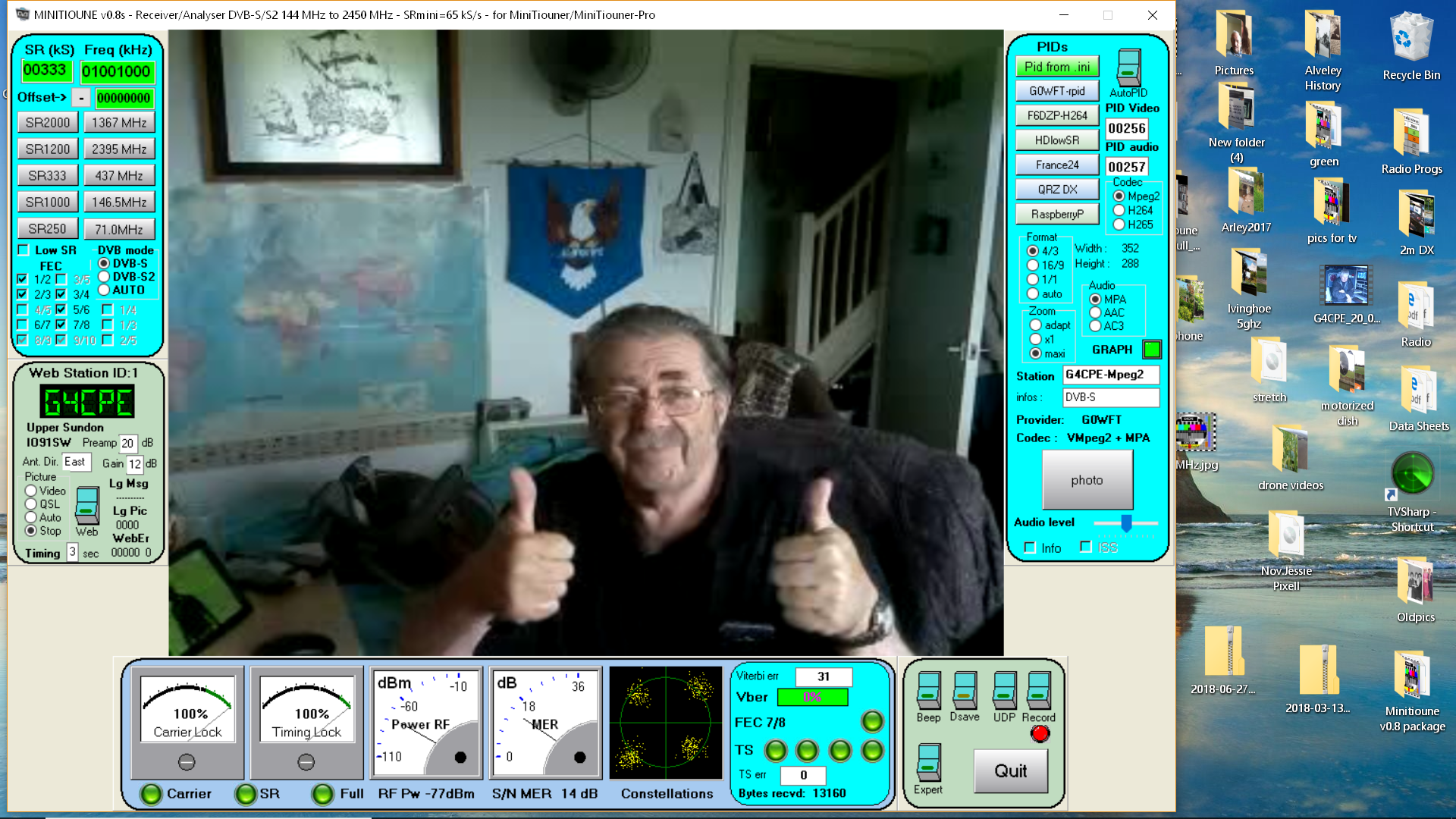 Hi Arthur
I wonder what you used to up convert to Mini Tiouner?
73

Hi Nick
The converter is an old CML TX up converter which has a L.O. on 930MHz and was used to convert 70MHz to !GHz.
I have also got a CML SAW filter amp on the I/P to keep out unwanted signals.
The set up appears to be good but my aerial is only a dipole which may grow a couple of extra elements when the XYL isnt looking.
73 Arthur
Top

Hi Arthur
I noticed it said 10Gig on your RX Gui.

Good luck with the upgrafes.

I keep looking at 4/6 antennas and imagining how big they are.... Not got one yet but whatever I get it will never be big enough

I came across this http://www.nooelec.com/store/sdr/sdr-ad ... it-up.html while looking for something else unrelated. There is a new version with a 125MHz LO and that is interesting because it starts to put 10m and 6m into the range of the SERIT tuner.

The reason it doesn't go higher is because it has a low pass filter in there. The design is open source and done in Kicad which is good because I can access the schematic and PCB design (noted - way too many stitching vias).

It would not take a huge amount of effort to modify this design to cover 71MHz and perhaps also reject the lower HF region. It uses 0805 parts big enough to work with. They are cheap, $40, intended to allow TV dongles to work on HF (though they can now do this directly so what's the point?). I plan to order one to experiment. Note they also work for TX, so it's maybe a way to get a Pluto on 6m. They don't have a pre-amp built in nor the tight filtering you will need to keep out strong adjacent band signals.

Edit - a quick analysis with the excellent AADE Filter Designer shows only the low pass needs to be adjusted. It has an attenuation of ~20dB at 70MHz. The band pass covers ~140MHz-210MHz already which allows for up-conversion from ~15MHz to 85MHz.

Another hack is simply to bypass it and do your FM band filtering elsewhere, e.g. in the preamp.
Top

The ham it up board arrived quickly, I was able to make the modifications and it worked.

The board as supplied has 10dB loss at HF rising to about 15 dB at its upper limit of 65MHz. Following the modification to the low pass filter the upper frequency limit becomes 71MHz as intended, with a loss of 16 dB. There is a steep rise in attenuation above 71MHz which is what we need to reject the strong signals in the 88-108MHz broadcast band. The board has a useful bypass ability so you can leave it in line to receive higher frequencies. So far, so good, a handy up/down converter. For DATV use it will need a pre-amp as there are no amplifiers on the board to overcome the mixer and filter losses.

I would not recommend using this board, largely because of the unexpected difficulty of working on it. Ideally it needs a hotplate and a high power iron. I have these things but many don't. The board uses many vias and there is no thermal relief for RF reasons. Pads connected to the ground plane have a very low thermal resistance to the large ground plane and as the board uses lead free solder with a high melting point, replacing parts is difficult.
Top
Post Reply
33 posts