The suggested LO level at the input socket is -10dBm for 437MHz. With the 6dB attenuator, this gives -16dBm at the chip. Figure 7-15 in the U2790B datasheet shows the mid point of the allowable LO level, dropping by 6dB per octave. It doesn't show details for < 100MHz. The LO appears to be re-constituted inside the chip, so the absolute level probably doesn't affect the RF output level.

Any other LO used for a 437MHz DigiLite should be fine, with the appropriate attenuator.

Figure 7-11 shows that the LO input impedance changes rapidly below 150MHz. Figure 7-13 shows an increase in output power as the frequency reduces, so the attenuator before the MMIC may need to be increased to keep the output power well below the P1 compression point of the MMIC. I would keep the MMIC output below 3dBm as a maximum.

The photo shows the 3.5-160MHz version of the Si570 PLL oscillator mounted on the break-off board. I've written software to run directly on the RPi to set the frequency, but I haven't connected it to the LO input yet. My only reservation is the amount of leakthrough from its 10dBm output when you only want -10dBm at the socket. Perhaps some sort of screening would help. The software is in an 'alpha' state at the moment, but I could make it available to anyone who wants to try it. I'll try to document the construction and installation over the weekend.

The 800MHz version of the Si570 has the same power-up frequency, so the software should work for both. The power up frequency is used to determine the exact frequency of the internal crystal. The output is LVDS. I don't know if that's a complication. I think my hands would shake too much when soldering a £40 chip, so I haven't tried it. I'm hopeful that the third harmonic of the 160Mhz version could be filtered off for 437MHz.

The extra wire is an afterthought. It might be useful to be able to switch off the Si570 from the RPi. If you want to get ahead of the game and start construction, first cut the track on the top surface of the break-off board underneath the Si570. This will allow the Si570 to be turned off from the RPi.

The Si570 is available from here: 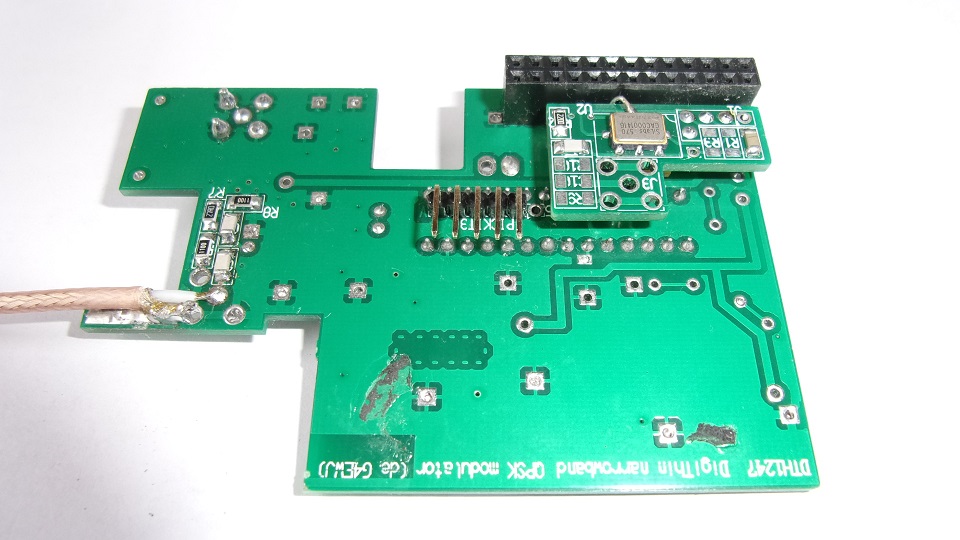