Thanks. I'm using the SMD version at the moment, but it's worth keeping that source in mind as a backup.

I am using the U2790B. I have had to reduce the IQ drive level to reduce the level of sidebands in the RF. The RF output is only 20uW at the moment.

I need to increase the LO suppression. I think I can reduce the LO input level into the U2790B to achieve this.

I can only see the existing DIP DAC7801KP. Do you have a link please.

You are correct, the ones that came up in my search turned out to be DAC7802KU and DAC7803KU

PS: They are available here though http://www.iccfl.com/product_info.php?products_id=8946
Top

Shipping is $24, but $48 is still a good price for 5. There are many other Chinese sellers showing it, with a vast range of prices.

You can get them from Mouser, but at something approaching £30 each.

The DigiThin pcbs have arrived and a few have gone out to early testers. The digital-analogue converter has proved to be difficult to find, but there's a consignment coming, literally on a slow boat from China, so it may be a few weeks before parts get into the BATC shop.

The top left section is a break-off that will take an Si570 synthesiser. The idea is that it fits under the DigiThin pcb on J8 and connects to the I2C port on the Raspberry Pi and provides the local oscillator for the modulator. They come in various versions, going up to and above 1.3GHz. The cheapest one goes to 160MHz and costs £12. It puts out a few milliwatts, so it may be possible to filter the third harmonic and use it for 437MHZ as well as 147MHz.

It's untested as yet. It was just an idea to fill up part of the rectangular pcb space. 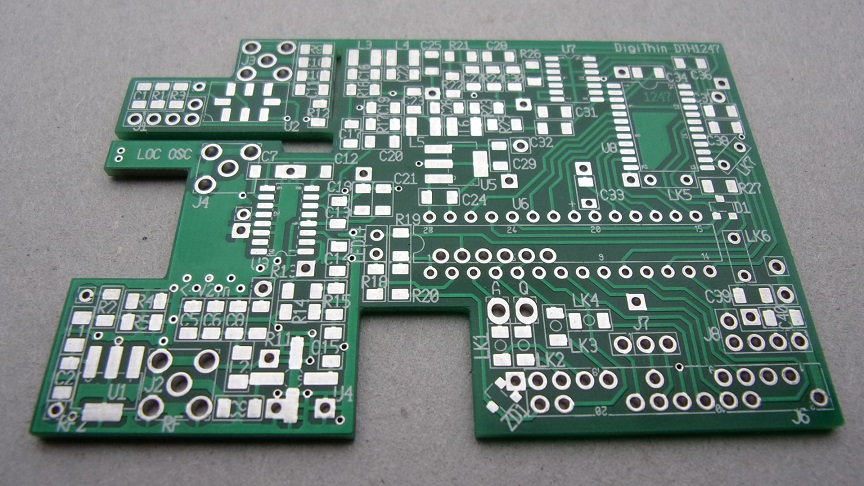 Brian this is good news... Looking forward to seeing this in cqtv and the batc shop.
What thought has been given to receiving it though as the tts21600 is next to obsolete?

The TT S2-1600 PCI satellite receiver card situation is very annoying, but I understand that alternative solutions are being investigated.