DigiThin is a narrowband QPSK modulator pcb, which sits on the Raspberry Pi model B 26 pin header. Symbol rates of up to 333k are possible. Bandwidth is roughly 1.5 x symbol rate. RF output is 1mW.

Software by F5OEO running on the RPi takes MPEG-4 video from the RPi camera, converts the data to IQ format and sends it to the DigiThin pcb. An external local oscillator sets the transmit frequency. The modulator chip specification is 100-1000MHz, although G4KLB has had it working on 50MHz and 70MHz.

It is designed for home construction, with no difficult soldering. The chips are SOIC with 1.27mm pin spacing and the other SMD components are at least 1206 size.

It is an experimental project, rather than a finished product and there may well be circuit modifications required as more people build it. The software is likely to change, so a dsPIC33F programmer is necessary.

Partial kits are now in the BATC shop.

For more details, see the article in this BATC magazine: http://www.batc.org.uk/club_stuff/rbtv.pdf 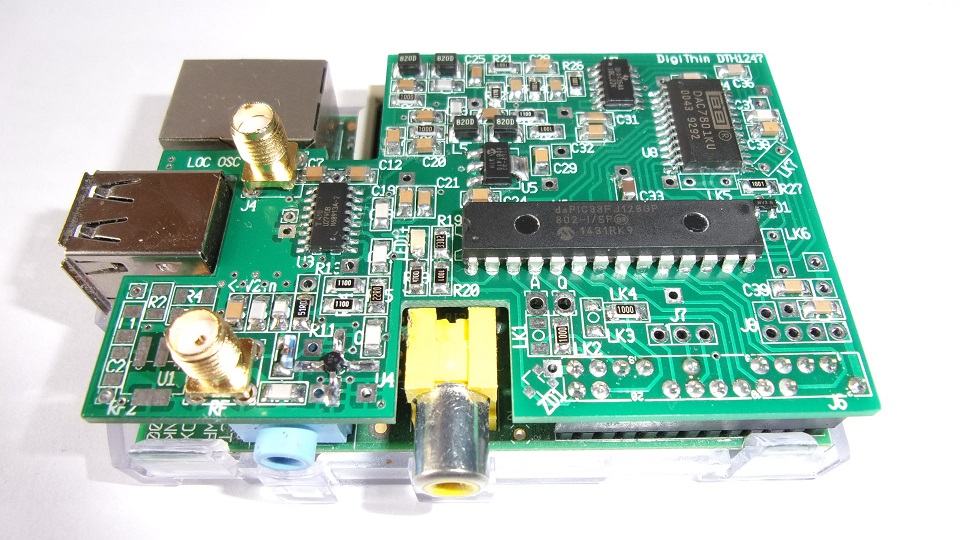 My original PI based digithin DATV transmitter is still working and a useful test source. Is there any updated software? For example to allow it to display a test card instead of the camera? It's not a Portsdown and it has no screen or display but there has been quite a lot of software development since it was developed. Can it (simply) run Portsdown?

I use a very old version of rpidatv on mine, to transmit .ts files. I seem to remember that I tried a more up to date version, but I couldn't make it work on the original Pi B. In theory, it should. I must try again with a later version.

I haven't gone down the Portsdown route yet, so I'm not sure about the possibility of using a DigiThin.

Mine is using a later PI B after the original stopped working, so I suppose it might have the MIPS.