I have all three of these but I am finding it hard to interface the RPi with the TS dock. I cannot see how to get a parallel output from the latest RPi datv software. I have the RPi transmitting so I can get that far but there seems no option for parallel out.
What am I missing?
Top

Which Raspberry Pi software are you using? Do you mean the Portsdown software (if so, which version?) or something else?

Hi
I am using F5OEO/rpidatv on the RPi now. By going through the install process and finding the menu.sh I have now got the menu with DTX1 output available. (see capture 01 attached ) The DTX1 seems to see the TS board and I load preset 3 but the received signal has no video! The camera is working and the rx works. Therefore I have lost something in the middle. I did have some problems with the TS Dock (see earlier post -- much earier!!) How do I test it? 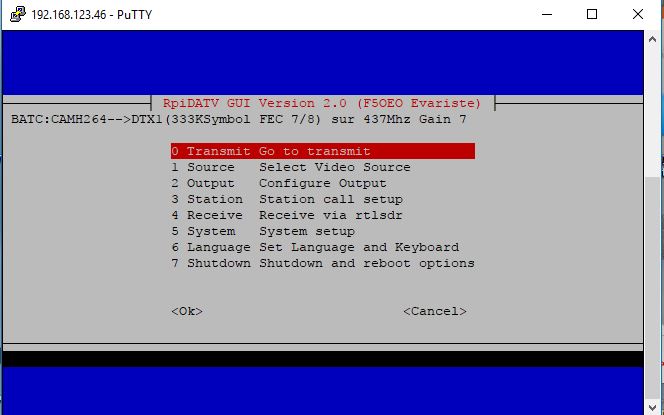 When I started playing with Evariste's software, I saw the DTX-1 mode but could not find anyone using it. I do not have a DTX-1 so have been unable to test it. For this reason, I removed the capability from the Portsdown build that I have developed. So you are right to use Evariste's original version.

Have you had it working with an earlier version of Evariste's software? I would start by putting a scope on the parallel input to the TS Dock, and see if the lines are toggling up and down when you have transmit selected. That will isolate the problem to the RPi if they are not moving.

Hi
As a device the DTX1 works well although mine seemed to be a bit slow to wake up at first! I bought it as I did not have time to build much then. Now I have more time but the number of projects has increased!!
I thought the 'getting the scope out' idea would be the second thing to do after asking here. I have a breakout solution arriving this week.
The system I am working towards is a Windows PC running vMix feeding the tx.
This works at the moment by using the vMix external output to a spare hdmi out on the PC video card going to a HDMI to comp video convertor then into the DTX1. These HDMI to comp video convertors are very cheap but are very variable in ways of working etc. even the same looking ones have different firmware.
The RPI would be used to take a networked video feed from the PC and feed the DTX1 and cut out the convertor.
At the moment I am working on the RF side of the project as I am on the edge of the repeater ( GB3NQ ) coverage.
I can get in on 23cms FM ATV and around 10watts into a big yagi but it is not 100% and a wet aerial stops RX until I use the rotator to shake it!
On 437MHz I have built a linear with a 60watt IC RA60H4047M and can produce atleast 6watts clean output. A large Yagi is being built for this. So far I have not been able to get into GB3NQ using DATV from here.
The repeater is quite quiet most of the time
I will update you on the scope findings.
If I am not alone in trying to use the RPi with DTX1 maybe people should get back to you to let you know.
Many thanks for your replies
Top

And another thing.....
I have not had the TS Dock working with the RPi
The DTX1 has the preset to work with the TS Dock and RPi and it all looks correct but the RX has no video. That may not mean too much if you don't have a DTX1 but basically means the scope idea was a good one!
If I owned the company behind DTX1 I would at least lend G8GKQ one to play with (fitted with a TS Dock ).
Top

Having checked the waveforms are all the way from the RPi to the header connecting the TS Dock to the DTX1 I then knew it must be something I had not set correctly in the menu. I had used preset 3 and that looked right.
Now it is working here is what I have on the menua
GENERAL - as you would expect, time and date
INPUT - AV Input 2
MODULATOR -RF Channel 437Mhz FEC 7/8 SR 333KSym/s
ENCODER - AV Input 2
then skip to ADVANCED TS Input 1 select and CLK MODE OFF
ADVANCED change to TS Input 2 select TS CLK Mode MAN CLK=< EDG=^
press down to get to
TS STREAM TYPE V=H264 A= MPEG2 if this is the mode you have set the RPI to.


This then worked with the Pi cam.

Hope this helps anyone else trying this....
Top

Any chance for a photo of the interface please?

Hi Roger VK5YYY
The interface photos are around if you look and much clearer than mine! http://www.batc.org.uk/forum/viewtopic. ... t=10#p9742 for example. If it is the TS Dock then mine is the version with both 36 and 26 wat connectors (think that is the correct number. The pin numbering is also around in this forum or on the DTX1 site. Basically the advice I was given was use a scope to check the signals and that is what I did once I got the software to work and give a parallel output. Have you got the parallel output working?
I would like the parallel output and the touch screen to work together but the pins are conflicting I think. That may be something for the future. I have even been having problems with RPi cameras. Had one that worked no problem but two others that would not. It appears that the ribbon connecting wire can be difficult sometimes! After a few atemps all three now work.
Martin G8LCE
Top

Hi Roger VK5YYY again,
If you were asking for a photo because you have a RPi 3 and the pictures are of the older RPi then the 26 way ribbon cable goes on the same end as in the photos and leaves the extra pins free. The first of the new empty pins will be bent slightly if you have a thick plastic 26 way socket. Hope this helps.
Top
Post Reply
11 posts