Back to Basics with Pluto

Click here to learn more about Amateur TV and the BATC
Forum rules
This forum is run by the BATC (British Amateur Television Club), it is service made freely available to all interested parties, please do not abuse this privilege.

Back to Basics with Pluto

I've spent the last few days installing and configuring a Pluto using various firmwares. I first write a markdown document on what I intend to do, then install and switch between USB and Ethernet hookups to note the effect.

My prime objective is to install the appropriate version of Analog Devices firmware, execute the required configuration commands, and finally install the BATC hosted version of F5OEO's "Only For The Brave" (as used by Portsdown) and finish up with a stable outcome.

I've noticed the F5EOE 'install' will always downgrade the Analog Devices firmware to a 'dirty v0.31', no matter which version was there before. But it doesn't overwrite everything entirely. For example, starting with Analog Device v0.31 - which seems to be the obvious choice - prevents one from executing 'device_format_jffs2' and `device_persistent_keys'. I haven't found documentation for this - presumably why it could be called "Only For The Brave".

Being a perfectionist and complete novice at the same time has been difficult for me, and may have produced inaccurate outcomes, so I seek advice from those with experience.

I believe you are overthinking this

Pick an original AD firmware version and load it, let's say v0.34, the latest. Enable both CPUs, widen the frequency coverage. Unless you are using a rev C or D Pluto and using an external reference, that's that done. Eject the Pluto.

Load the F5EOE firmware. Eject it.

The new firmware needed a name, he must have chosen one with v0.31 in it, it doesn't mean it has "downgraded" the AD firmware you initially loaded, it just means it's overwritten it, and the new version has a different name.
Top

Evariste's firmware was based on a specific AD firmware that worked fine with the Pluto Revision B. If the existing firmware works well then stick with it. Additionally, why is it assumed later AD firmware is better?

An earlier version of firmware is not always a downgrade. There are many reasons for updating firmware, fixing bugs, adding new features, security patches, revised CPU steppings and supporting hardware changes. These might be relevant if it is not working, but if it is working, then they are not needed. In short, if it is not broken, then don't fix it.

I am happily using version 303. The hardware isn't going to change. AD are not going to develop their own DVB firmware. It is not exposed to the internet. It has some idiosyncrasies, but unless Evariste or someone else comes up with a better solution, then I will stick with it.

In desperation, I've bought a laptop with Windows 10 - and Installed:

from the command line, I get error popups:

After repeated reinstalls, I get the same result. I haven't used Windows since 2008, so what next?
Michael EA7KIR
Top

The links above may not lead you to the latest version but I am sure a quick Google will link you to whatever the current version of Visual C++ is. Good luck.
Top

Install an entire development IDE just to connect a Pluto. Are you serious?

If I run the same command from something called PowerShell, I don't get the error. But there's no output.
Michael EA7KIR
Top

Not the software for writing the stuff, this is what I have on my Win 10 PC 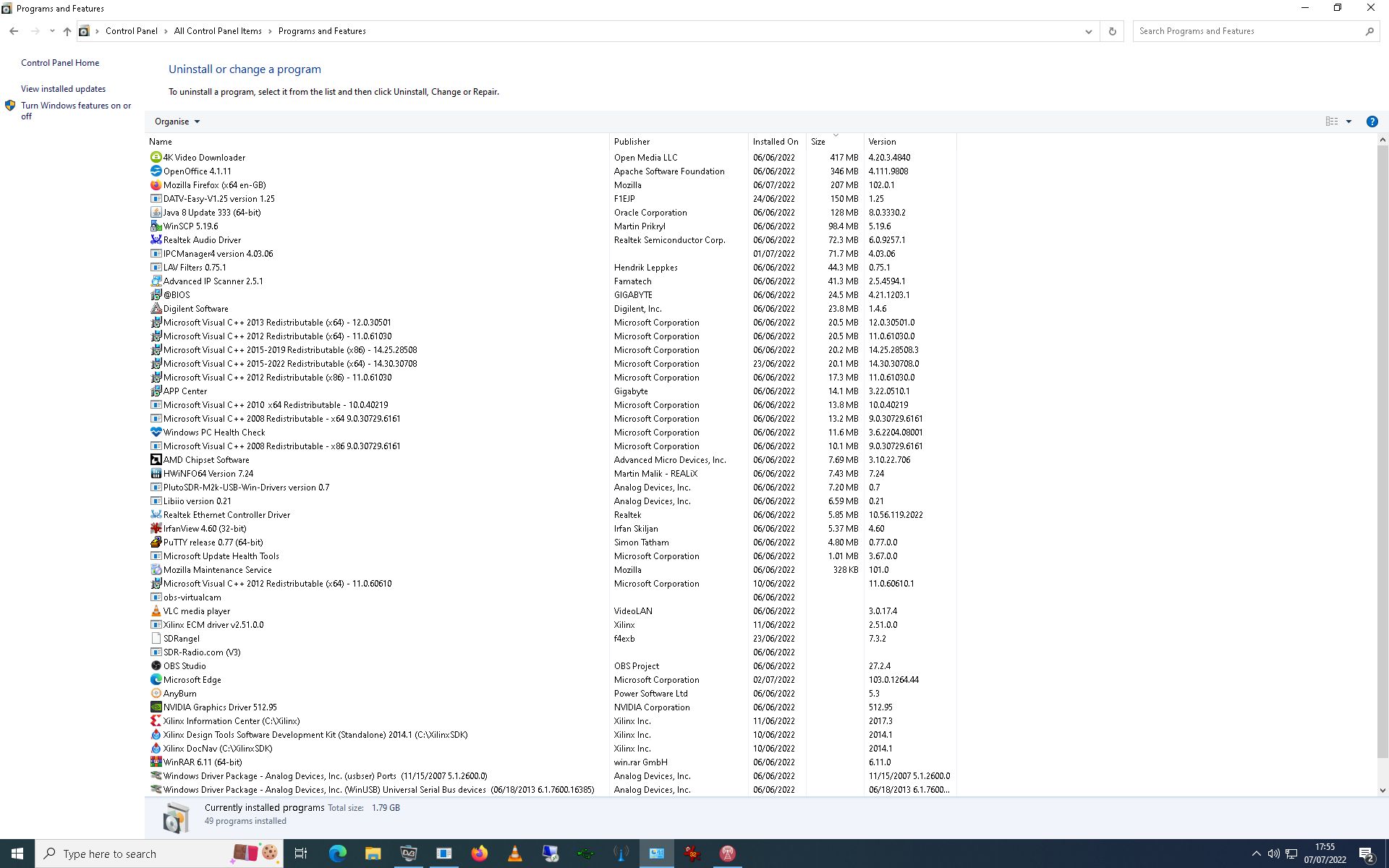 Playing around with Windows, I'm beginning to think that I'm not going to achieve anything haven't been able to do on the Mac command line.

I think the problem is my misunderstanding of what needs to installed on the Pluto - and what order. For example:

* copy v0.34 zip to mass storage device. ie plug the pluto into the Mac with a USB cable and drag the zip on to it.

It's what happen next I need to know.

* Do I install F5EOE from BATC or Evariste's GitHub? - I will NOT be using Portsdown.

* Do I use the same drag and drop install method, or must it be in DFU mode?

During my early attempts last year, I was able to change password and have it persist. But I've not been able to achieve this since. That, and only having illuminated the satellite with a very low signal, has led me to assume that I'm messing up the installation process. This is where I think I need the most help at the moment.
Michael EA7KIR
Top

"* copy v0.34 zip to mass storage device. ie plug the pluto into the Mac with a USB cable and drag the zip on to it."

That's wrong for a start, you need to copy just the pluto.frm from within the zip to the root of the Pluto file system whilst connected via USB

Then EJECT the Pluto in software, not physically unplug it. The new firmware will then start to be written to the Pluto. When the LED stops flashing rapidly it's done.

But why don't you get it all running on the OS it was really designed to run on first, to prove there are no other issues?
Top

Return to “Getting Started?”