Click here to learn more about Amateur TV and the BATC
Forum rules
This forum is run by the BATC (British Amateur Television Club), it is service made freely available to all interested parties, please do not abuse this privilege.

It's a new Type C/D and it came with version 0.32 firmware. Before doing anything clever, I connected it to the Mac using USB. It mounted and I could see 3 files and 1 folder...

The info.html will open in the browser. I'm intending to use this thing over the LAN, so I reconnected with an OTG and was able to browse to pluto.local and see the same html file. I could also login with ssh root@pluto.local and password analog.

Back to the USB connection, and feeling brave, I decided to upgrade the firmware. I right clicked the Firmware Update button to save it as a ZIP file (recommended) to the USB device and then ejected the device as instructed. When the LED finished flashing, the Pluto re-mounted itself. Sure enough, it now reported that version 0.34 was installed.

All this without installing HoRNDIS on the Mac. They do say it's optional and it's not supported on macOS versions later than 10.15. I'm on 12.1.

Logging in with ssh was becoming a pain, because the Pluto looses the keys when powered off. There's fix for this...

The first command format/erases the mtd2 partition. This went as expected. The second is supposed to take some time and printout a result, but it didn't. Nevertheless, It's now possible to cycle the power without loosing the keys. I then changed the password and that worked too. Then I tried executing usb_ethernet_mode = ncm, but that command doesn't exist.

When I eject the Pluto it remounts itself almost immediately, so I have to be quick to disconnect it to avoid being notified than the device wasn't ejected properly.

At this point I was expecting to browse to other pages, so I decided to start all over agin and reinstall version 0.32. That didn't work, so I reinstalled 0.34 again.

I was also expecting to use the default password, but that, and the ssh key thing, is still lurking somewhere inside the Pluto. I was hoping for a 0.34 factory default.

This is where I need some guidance. Should I plough on and install some DATV firmware? If so, which version, with what patch, and from where? And how? Those fortunate enough to be up on QO-100 will know the difference between the various F5OEO's versions and F5OEO's Perseverance, but I can't figure out what the difference is - or even if they are one of the same.
Michael EA7KIR
Top

There's a step by step guide I wrote to resurrecting a Pluto - I know it's written for Windows users but it has all the links and process you need to get it working on DATV - note it does matter which F5OEO firmware you run if you are intending to run it with Portsdown.

You may also find the article by Mike G0MJW in CQ-TV 273 page 20 useful reading if you want to run it without Portsdown and direct from OBS and I believe that is not so fussy about F5OEO firmware version.

Months later and finding time to play with the Pluto. I need to ask, in which order should the pre-amp and filter be?

For QO-100 DATV, does Pluto have an 'optimum range' of output powers giving acceptable distortion?

Finally, if I needed to insert an attenuator, where would be the best place to place it?
. 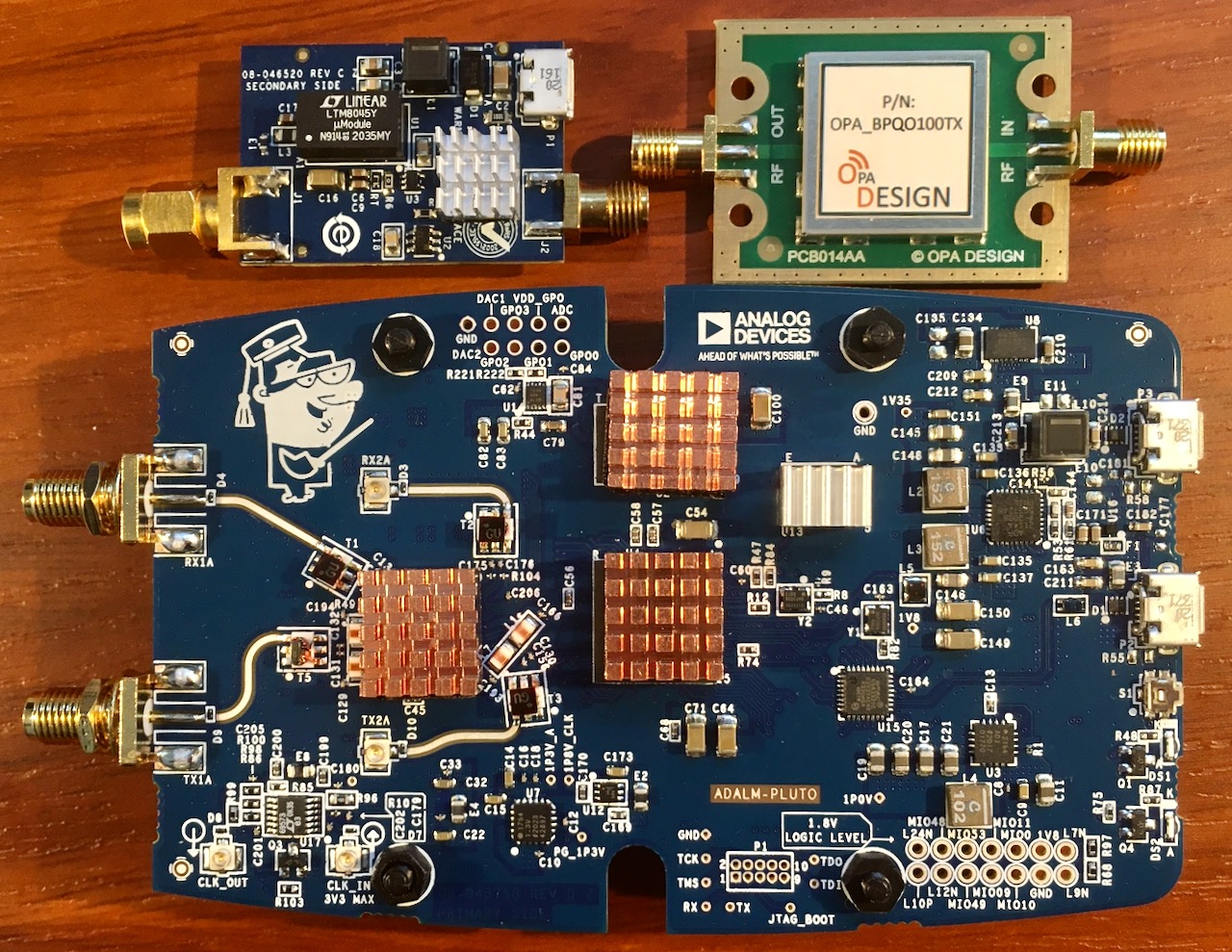 The CN0417 board already has a 2.4GHz band pass filter on its input so there is no point in having another filter in front of it. The output is unfiltered. Based on this I would fit the filter after the CN0417.

To produce a good DATV signal the Pluto gain needs to be set a little below maximum. About 80% gain seems to be OK.

The Pluto output level already has a good range of adjustment. The only reason for fitting an additional attenuator would be to ensure that each of the following amplifiers is not being driven too hard. The position would depend on where the overdrive was occurring.

Thank you, Colin, for answering all my questions so perfectly.
Michael EA7KIR
Top

I can open the info.html file via USB by double clicking it and I can open http://pluto.local/index.html

But info.html is not exactly the same as index.html, because the internal links, such as /config.txt, don't work from /index.html.

If you find any of this confusing then I'm not alone, but I'm hoping there's someone out there who isn't.
Michael EA7KIR
Top

Are you connected by Ethernet? If so you need to use the assigned address. The 192.168.2.1 address is for when it is connected via USB on a PC. That's a local network to that PC and not accessible outside without additional work.

I've been trying both ethernet and USB, so hence the long post. However, I would much prefer to be using ethernet if that's possible. Logging in over ssh lands me in /root as expected. I find the official online documentation to be out dated, ambiguous and confusing. As stated in my long OP, I have managed to upgrade the Pluto firmware to 0.34 - confirmed as follows.

So what next?
Michael EA7KIR
Top

Are you asking how to load the F5OEO firmware?

Return to “Getting Started?”