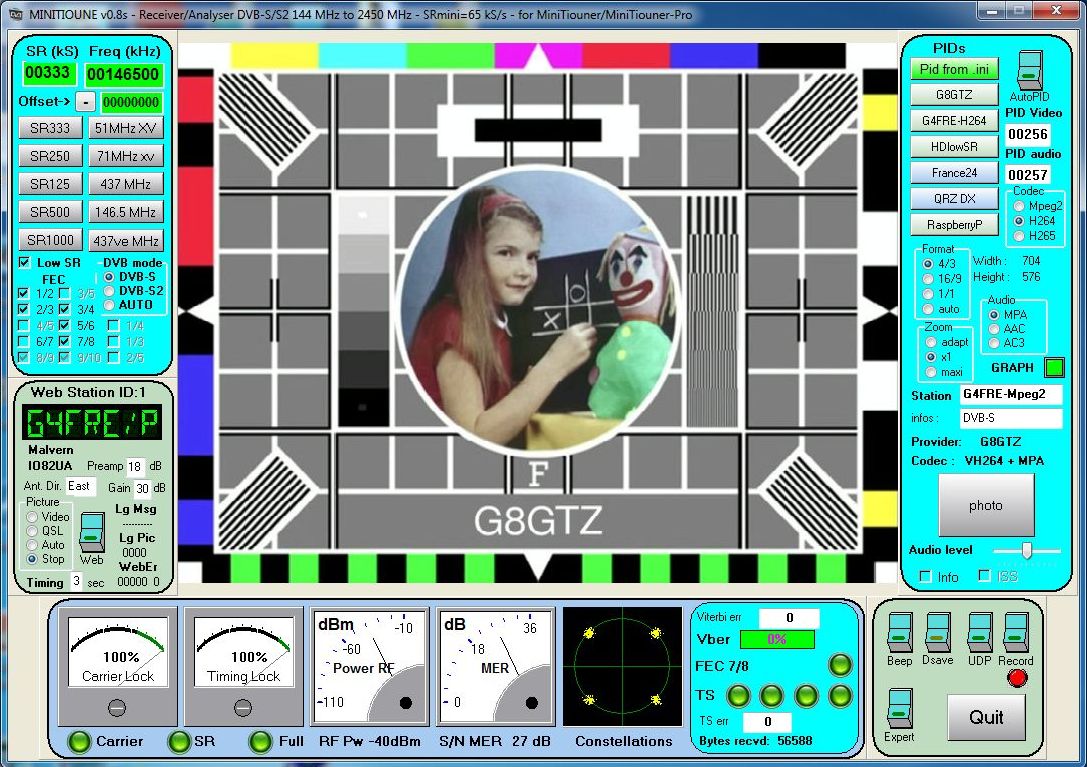 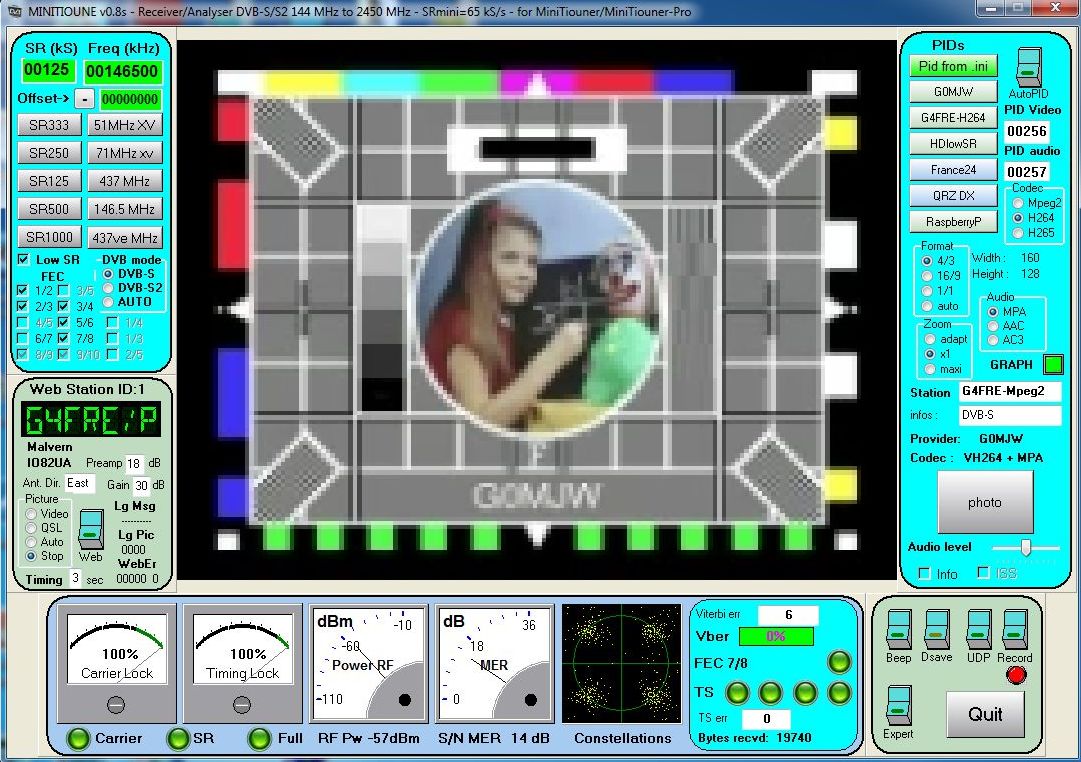 The biggest issue of the weekend was the Portsdown touch sensor calibration values corrupted, meaning I could only really use the top left quadrant of the screen!
Last edited by G4FRE on Tue Jan 15, 2019 9:48 am, edited 2 times in total.
Top

That was a fun weekend operating on the 2 extremes of our DATV spectrum - even if it was very cold on Sunday!

As part of the tests requested by the RSGB, on Saturday I went to IO91FN and received Dave G4FRE on 50MHz at 12 dB MER from IO81UA over an 73 Km path, Dave saw my signals but before he got a decode my transverter decided to blow a fuse - after replacing it 3 times with strands of wire I decided it was ill so gave up

We did exchange good pictures on 146MHz at 20+ MER (bottom left picture) - considering power levels were lower on 146, we need to do further link budget analysis to understand why the performance at 50 MHz does not seem as good as at 146 MHz.

On Sunday I went to IO91JH01OP and received 3.4 and 2.3 GHz pictures from G8GKQ. Interestingly the signal on 3.4GHz showed signs of very poor phase noise (blurred dots in the constellation display - top left picture) and would not decode on 333Ks but did decode on 1Ms. Later tests by Dave in a warm shack leads us to beleive it was a temperature issue - it was cold out there yesterday!

Neil, G4LDR, went to IO91KF42UG and we exchanged 2 way pictures on 76GHz over a 12.2Km path. The signals were S9+++ on NB and for DATV we ran 333ks and achieved an MER of 14dB - the MER was limited by phase noise issues and the constellations showed the dots blurred along the circle which on a poor signal path will lead to inter symbol distortion and limit the performance / distance. (bottom right picture)

Neil then joined G8GKQ and G7JTT at Cheesefoot Head IO91JB01LD and we again exchanged pictures over a 28.06Km path which we believe to be a new world record. We started on 333Ks but then switched to Neil's C920 webcam at 2Ms and exchanged fantastic HD pictures on 76GHz! (top right picture).

We were both surprised this path worked but again the MER was 14, so we clearly had some link margin in hand. It is likely that the phase noise issues, caused by multiplying a 12Ghz synthesizer by 6 for the local oscillator, will start to limit performance over much greater paths but we intend to find a ~40Km path and try some more tests. 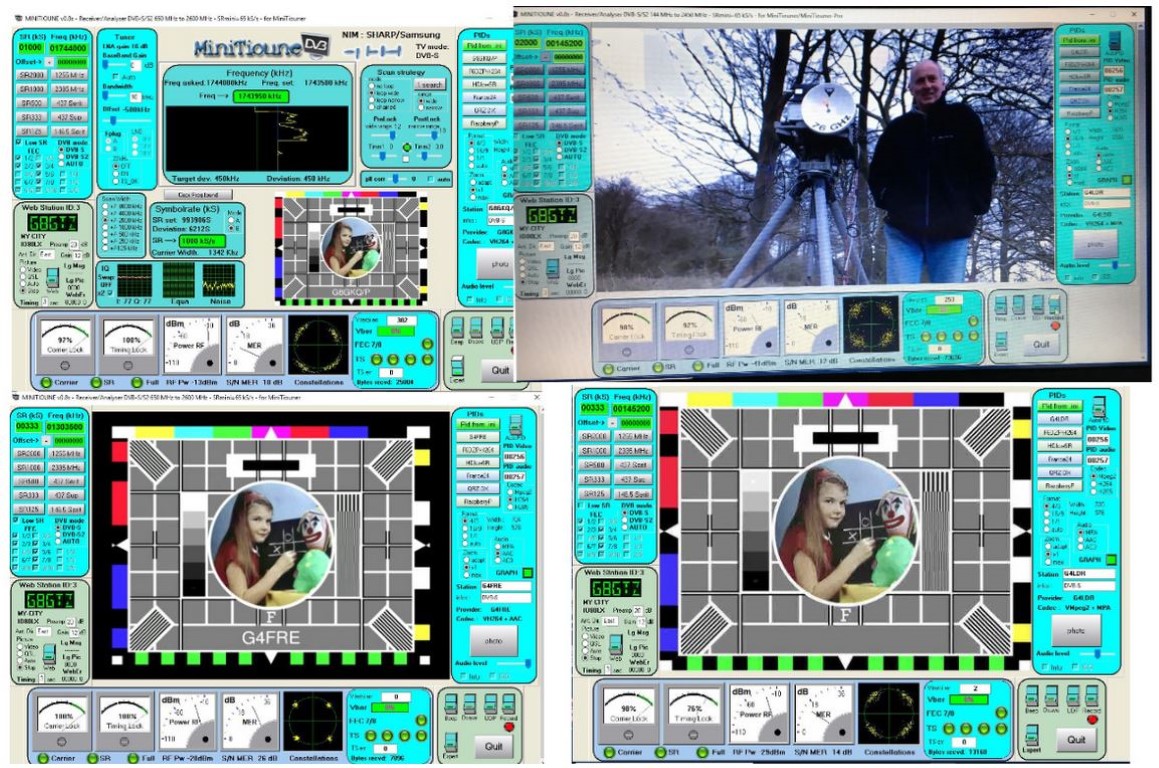