Good signals from G8VPG/P and G4CPE on 4m today with MERs round 10-14 dB. I forgot to hit print screen when Shaun was transmitting but the MER was 8-13 dB with QSB. I have a 470MHz IF. Must modify the minitioune.ini file to make it display properly. 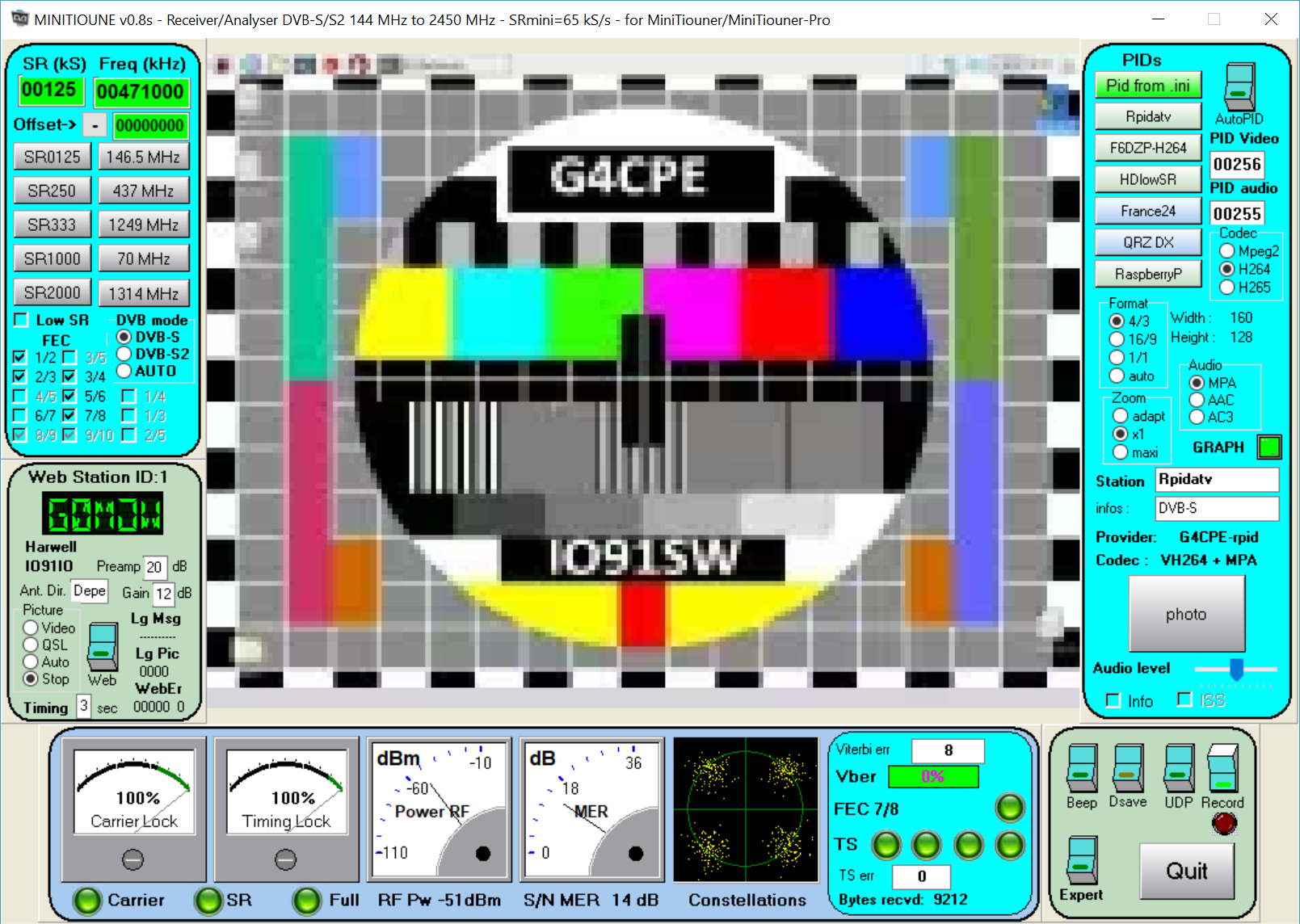 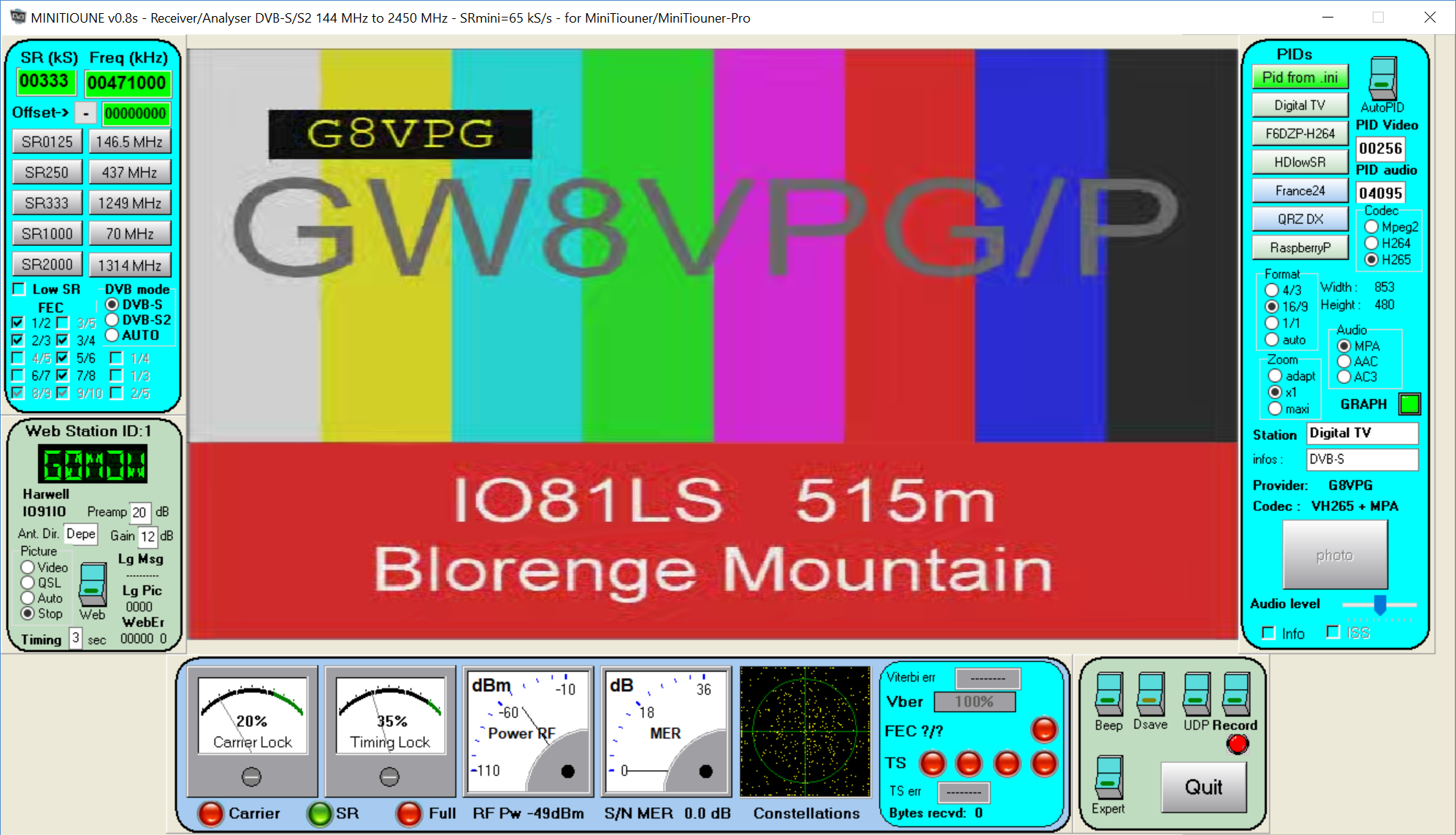 Good session this time on 71MHz really good pics from Shaun GW8VPG/P at 180km. and a first with Mike G0MJW.

My aerial was just a dipole at 20 feet, hope to improve in the near future.

A change of PC has reduced the noise floor on 2m and 4m considerably my old PC raised the noise floor by about 10db, I think a lot of the rubbish was being radiated from an HDMI monitor and cables. The laptop I use now has made a big improvement. 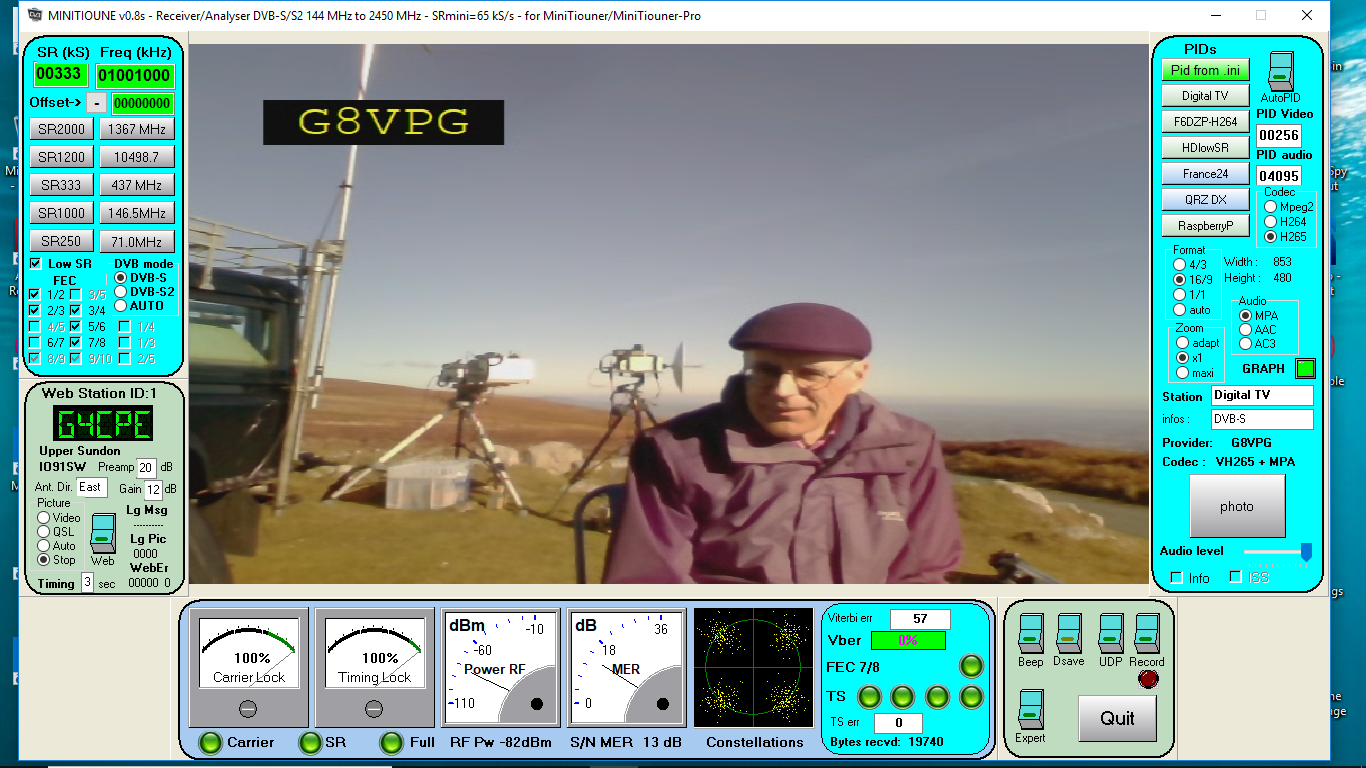 My first pic received at 66ks/s 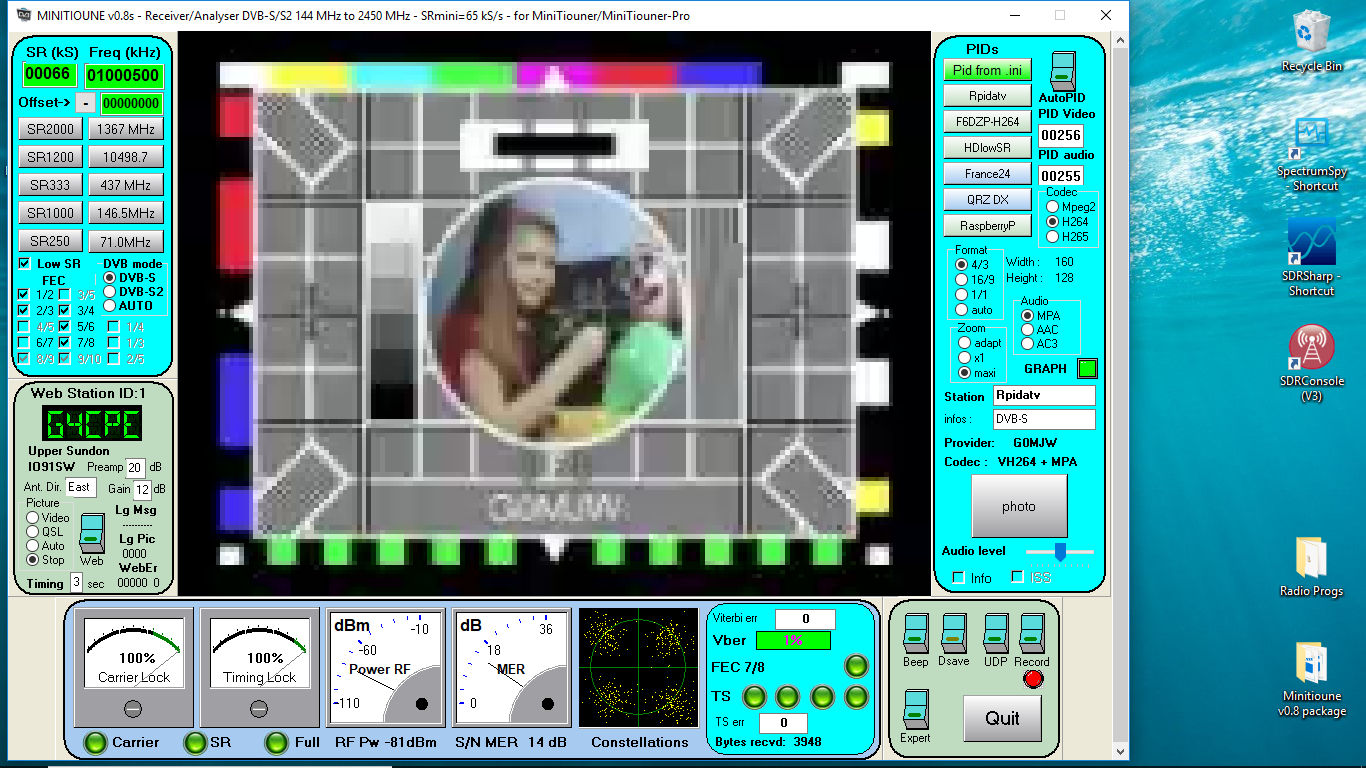 I have a nice video from Sean. I had to go down to 66ks to be heard by G4CPE and I had to move down the band a bit, which is OK as it fits. However, I was receiving G4CPE rather well and there was only a maximum 3dB difference in our TX powers.

I traced my not being heard well on TX problem to the dual band yagi I am using. The VSWR on 6m is very good but on 4m it is quite narrow, 1 MHz or so. The minimum is at 70.0 MHz and by the time it has got to 71MHz it is much worse and the losses were too high. I plan to try to move it up to 70.5MHz by shortening the driven element, 3cm should do it. I think we need a new design with a wider bandwidth.

Meanwhile, what about 6m? That should also work. I onw the noise it higher but so is the possibility of Es and potential new records. There is also a lot more power allowed.

Well that was a lot of fun - even if it was dark by the time I packed up and got home!

Fantastic weather, lots of activity and a microwave contest as well. There was certainly something going on with conditions - some stations were weak, some were strong and there was a dark haze on the horizon for most of the day.

I think a focus on certain bands did help reduce the chaos - stations worked included:

Thanks to all involved - 71MHz does seem to have real potential for long distance working and wondering if I should put it on the mast at home.... 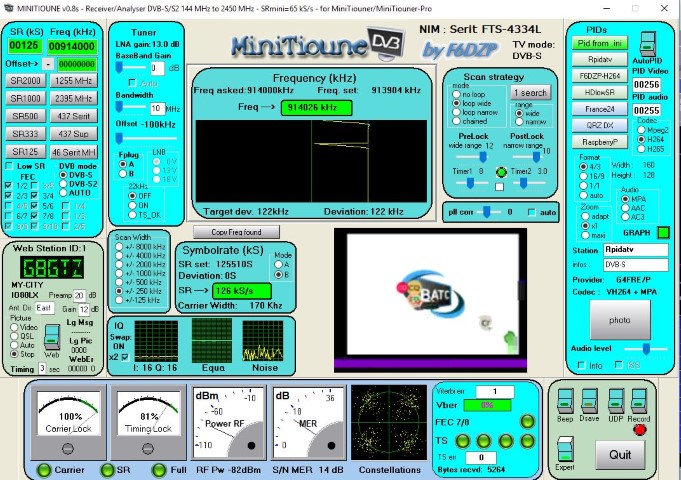 G6AUR & myself had a very enjoyable day on the Blorenge mountain in South Wales yesterday. We left home with mist and a dead calm, but when we arrived on site there was quite a stiff breeze and we had to restrict the aerial height. Activity concentrated on 71MHz and my 333ks/s H265 pictures were seen at G4BVK/P (Westbury White Horse), G8GTZ/P, G0MJW and G4CPE, which at 180km constitutes a new one way record. Conditions did seem up a little in the morning, but faded back to normal after lunch. Unfortunately I had a problem with my 4m upconverter which was restricting its sensitivity and I was unable to receive any pictures, although Noels were frustratingly right on the cusp of decoding. I think Noels new aerial and the height he was able to erect it at helped him a lot. Late the previous evening I decided to pack 5.6GHz just in case and did try with Arthur, but it was no go.
What was also very interesting was that GW3TKH & G4HQX were on site doing the mm microwave contest with 24, 47 & 76GHz. With my 5.6GHz, that was seven dishes in a row; you can imagine how much interest this generated from the public!
73 Shaun. 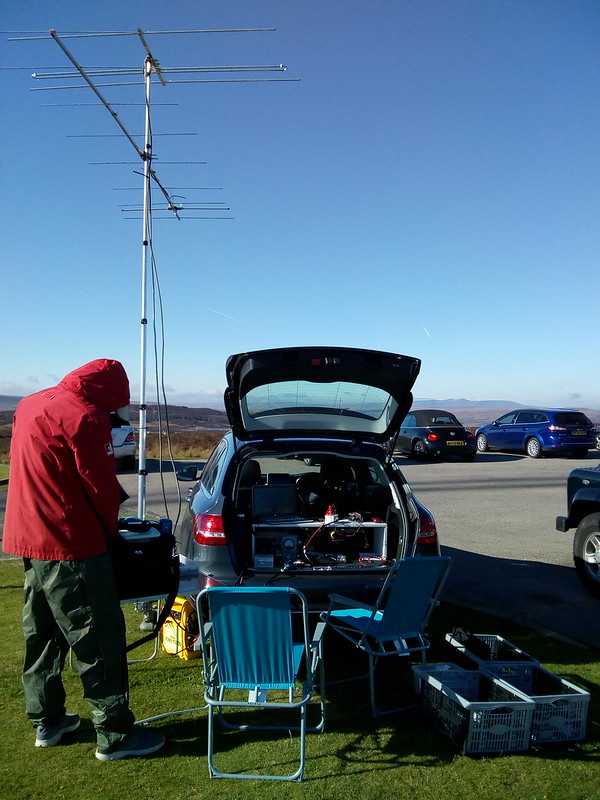 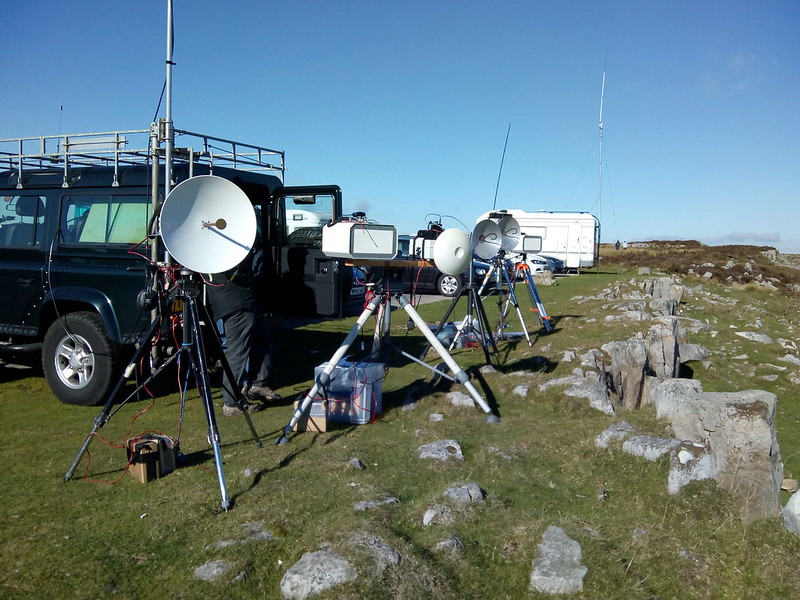 Yes, pity we didn't do it 2 way. Impressive array of dishes and is that an HF whip on the camper van in the distance?

Barry G4SJH was also up at Walbury operating 24Ghz and his gear along with the 76GHz gear is shown below: 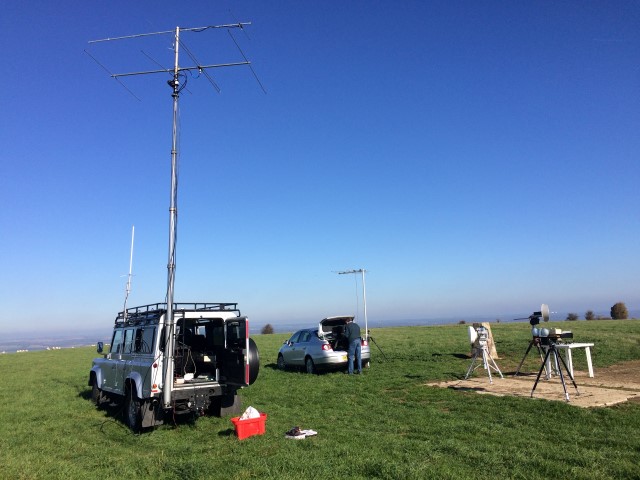 I think the whip in the distance was CB. The owner stayed in his van all day and did not come out to talk to us. It was very busy with walkers etc. and we fielded loads of enquiries about what we were doing.
I am annoyed that my receiver did not play ball. I am going to spend some time improving this over the next few weeks. I wonder what other people are using to upconvert 4m?
Shaun.
Top
Post Reply
29 posts