G4BVK and myself are planning some further portable 4m tests this Sunday 2nd September. Ken will be at Win Green IO80WX and I will be on the Blorenge mountain in South Wales IO81LS. We aim to be on site by about 11.00am and will stay as long as there is some activity. I can also take my 5.6GHz gear if anyone wants a QSO. Talkback will be on 144.750MHz horizontal FM or Zello channel ATV south. Please post here if you are able to be active. Further details and confirmation of arrangements will be posted on Saturday.
73 Shaun G8VPG.
Top

All arrangements confirmed as above. Since no one has contacted me about 5.6GHz, this will be 71MHz only.
73 Shaun.
Top

Yesterdays attempts to extend the 4m record from 59km (two way) and 87km (one way) was a complete failure. The path Blorenge/Win Green is one that I have worked on 5.6GHz, but 4m carriers were barely above the noise. It seems that 4m does not want to go beyond line of sight paths. One factor may be that aerial gain is low, with the compact three element beams in use probably not achieving much more than 6-8dBi. Another factor that has been suggested to me is that aerial height on 4m is quite critical. The typical portable set up of a light weight mast and a drive on base means that on 4m, aerial height is not much more than a wavelength. Thanks go to G4BVK/P, G8LES, G0MJW & G4CPE who all tried to work me. Since they were not working each other, I am going to check my own set up to check that it was not a common point of failure.
73 Shaun. 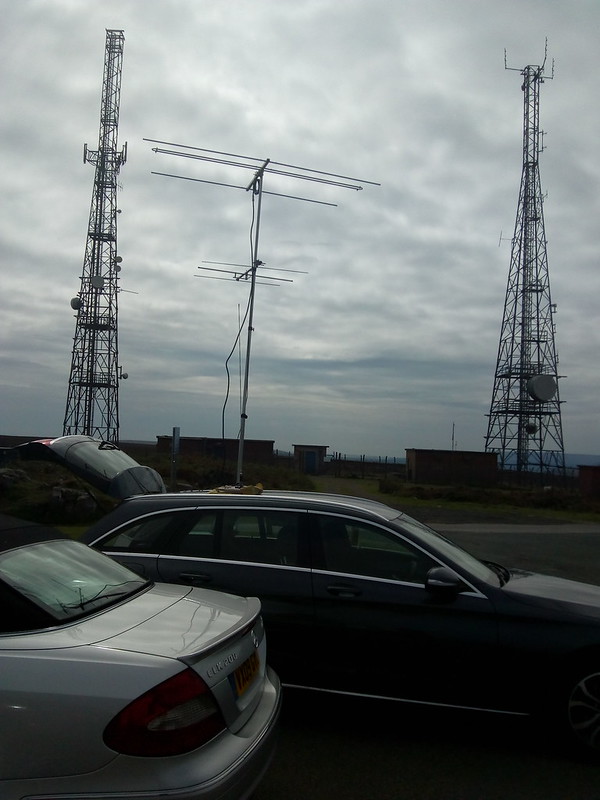 The problem could also be a very high noise floor on 71MHz - Did you use a spectrum monitor or listen to the carriers - this is fairly easy to do using an RTL dongle and Portsdown / PC at whatever IF you use going in to MiniTiouner.

The band does hold great potential if we can get over these initial learning curves - I'm looking at the dual band 6m / 4m antennae design in Radcom this month and wondering if it can go on the mast at home....

I was curious what the typical system capabilities over an LOS path on 4m vs 6cm was...

I would echo much of what has been said about 4m. That looks suspiciously like a low-band dipole on the right hand mast, and I have encountered serious desense issues near a couple of shared sites, so definitely take a look for other carriers.

Also I would agree that the height of the antenna appears to be very important. I have been contesting on 4m voice for a few years with an HB9CV on a 5m portable mast. The results have been rather disappointing even from a good hilltop site. However, I recently acquired a 10m telescopic mast which fits my wheel mount, (with just three thin guys for stability when it is windy) and as soon as I got the HB9CV up to 8m and above I noticed a very significant improvement in performance. Now I can regularly hear beacons from Dublin, Carrickfergus and Dundee which just weren't there before.

I found some highly theoretical information on the web about "ground gain", and one antenna manufacturer's site claims almost 6dB more gain with 4m antennas mounted at 10m. In any case, getting your aerial up more than two wavelengths above the ground would appear to be a good rule of thumb here.

Good luck with the tests,

Optimum height for antennas to benefit from ground gain is a well known topic, also to avoid local clutter - at VHF the ground reflection theory only really works with a smooth path, not suburbia. In suburbia there is significant height gain which is to do with getting over the top of clutter.

In the case of the recent tests between Shaun and myself, I know it wasn't densensitisation as both of us have tight filtering and before the pre-amplifiers. Looking at the carrier level, the 4m signals were very weak in both directions compared to 2m talkback where they were very strong. Shaun was running high power on 2m but I was only running a few watts. We know this path works on 2m DATV from tests earlier in the year. The following plot from my latest iteration of Path Profile indicates there is only one major diffraction point, IO81UQ 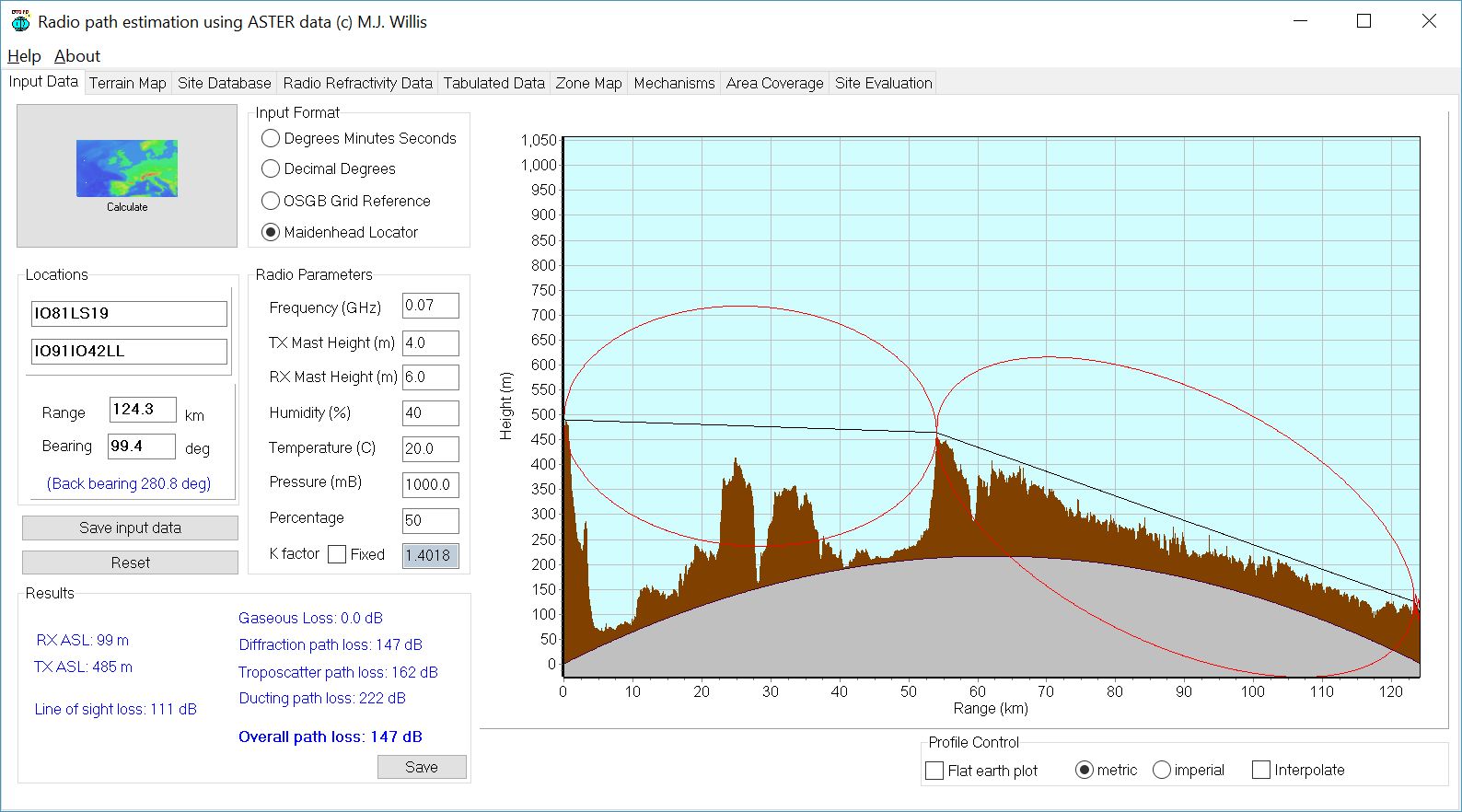 In my case, I think part of the problem was local to me, if you look carefully you can see there are local obstructions that perhaps had a bigger impact on 4m than 2m. Path Profile knows nothing about local clutter, it assumes an antenna in the clear above local obstructions. I don't think neighbours would be happy with either of the two alternatives, a 30m high mast or demolishing their houses and cutting down all the trees. 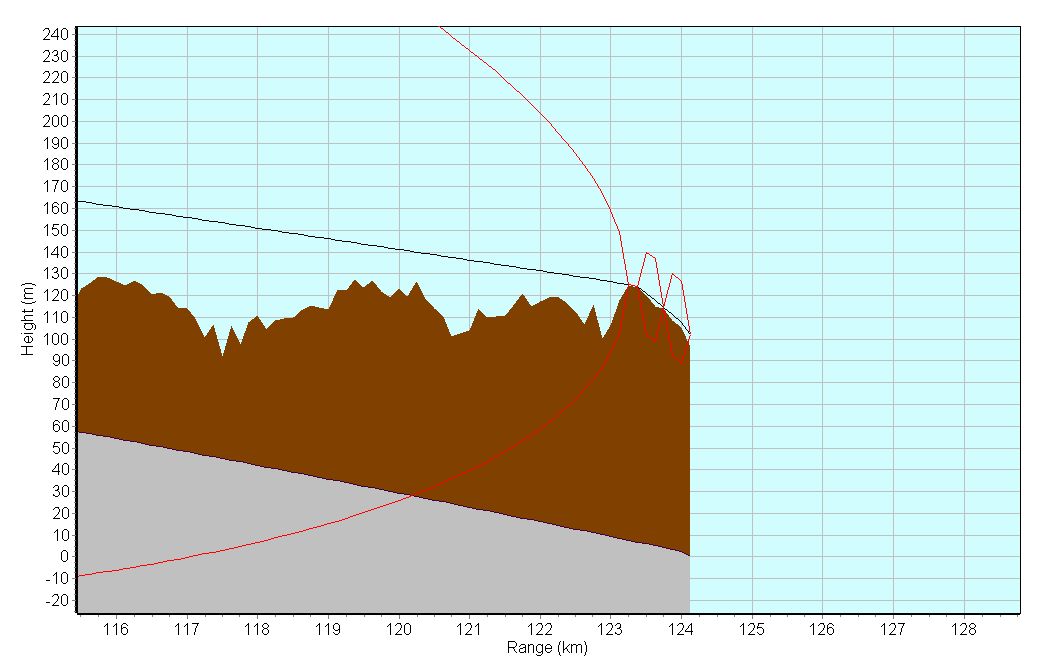 Even so, these local effects should not amount to more than a few dB and I expected 4m to be stronger than 2m which it was not. Not by a long way, 20 dB at least. My initial conclusion was one of our antennas, probably mine, wasn't happy on 71MHz. However, a quick carrier check at 70.3MHz showed little difference. My antenna is only 6m above ground, but I can hear Angus all the time on 4m so it can't be that bad. The 2m antenna is only 1m higher and that's not enough to explain this either.
Top
Post Reply
7 posts • Page 1 of 1