G4EWJ wrote:If M0DTS is still going to be out on Saturday, I'll go to Anchor, IO82KL. I still don't know if I can actually get to the site that has a northern takeoff.

I'll try to get to Clee Hill on Sunday, but it'll be a late call, so expect me if you see me. Is the access road to Clee Hill the one from the south?

Is anyone going to be on Dunstable Downs on either day?

No locals on Dunstable Downs as far as I know. G4CPE and I will be operating from our respective home QTH.

Steve
Find me on D Star through GB7BP
Top

Doesn't happen very often during our activity days but both Hepburn and F5LEN are predicting a slight lift on Sunday!

Thanks Steve. I'll beam your way from Clee Hill if I get the chance,

Thanks to those who i had contact with, an enjoyable day out.

Shame about dx though, conditions were very poor.
Shaun GW8VPG/P was the only dx on .750 talkback but that was weak! everyone else was way down in the noise.
Had a quick try with F9ZG on 70cm after making contact on 2m ssb but way too weak and it didn't work at 590km unsurprisingly!!

Despite the poor weather on Saturday, and family commitments on Sunday.

I did call out on 144.750 but nothing heard from Brian and Shaun on their hill tops.

Thanks to everybody who was on the air (or tried) during the activity day. Now that you've warmed up and dried out, please could you post details of your activity (no matter how routine it seems to you) here so that I can publicise it in CQ-TV AND RadCom?

My initial listing suggests that it was a very good day with at least 20 UK stations active!

Remember that there are awards for:

I can't recommend awards unless I get details of your activity!

Please send any photos to Dave.g8gkq at gmail.com.

Brian G6AUR and myself ventured out to our favourite spot, the Blorenge Mountain in South Wales (near Blaenavon, IO81LS) on Sunday 11th December 2016. The previous day had been a wash-out in the South of England and most portable activity was re-arranged for the Sunday. When we got there, it was fine, but there was a cold wind, which made us restrict the aerial height. 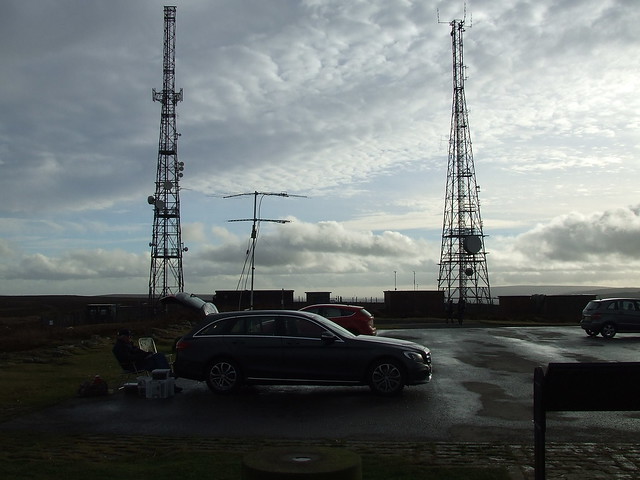 We quickly established contact with Noel & Dave on the Isle of Wight and they were a good signal on talkback. We had a fairly easy, two way QSO on 146.5MHz, 333ks/s, with Noels signals achieving an MER of about 14dB. By the skin of our teeth, this constitutes a new world distance record for a two way 2m RB-TV contact at 185km. 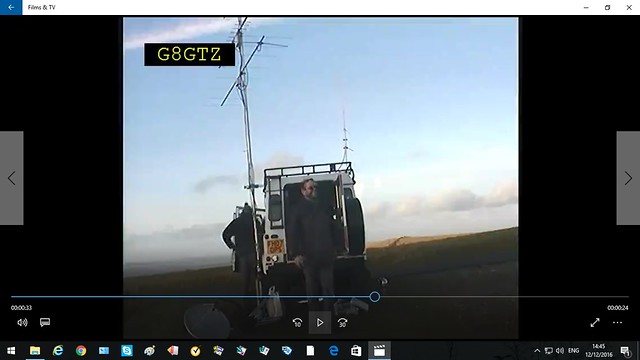 We also were received at full scale MER by Ivor G1IXF in Bristol (46km), who had been busy the previous week working on his aerials for the weekend. We also accessed the GB3ZZ 2m RB-TV input, off the back of the input beam, which is heading South East at present. 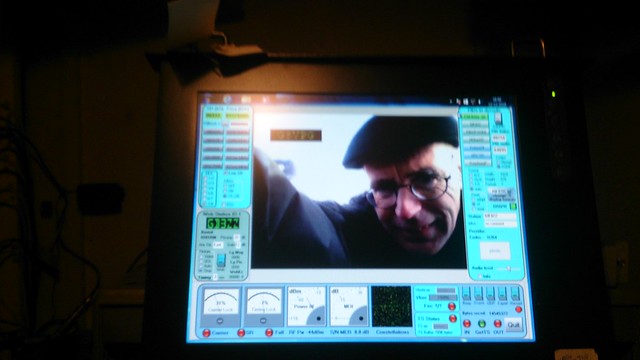 A little later in the afternoon, Brian G3NWR/P arrived at Clee Hill. He was a reasonable signal on his mobile whip, but once he got his beams up, it was end stop on talkback even at minimum power – not surprising for a 86km line of sight path between two 500+m peaks! We worked Brian two way on 146.5MHz 333ks/s with full scale MER. 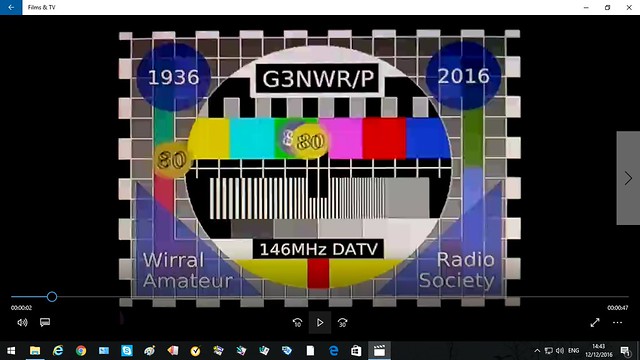 We beamed in all directions at various times over the three hours that we were active on site, but the only other station we heard or worked was Rob M0DTS/P, who was quite weak on talkback. All told, it was a very enjoyable day and thanks go to all the other stations that went out portable in the middle of winter! One of my winter projects will be to re-configure my equipment so that I can operate in the car, because it was really cold at 515m asl. A Happy Christmas to all ATVers and we look forward to working you all next year. 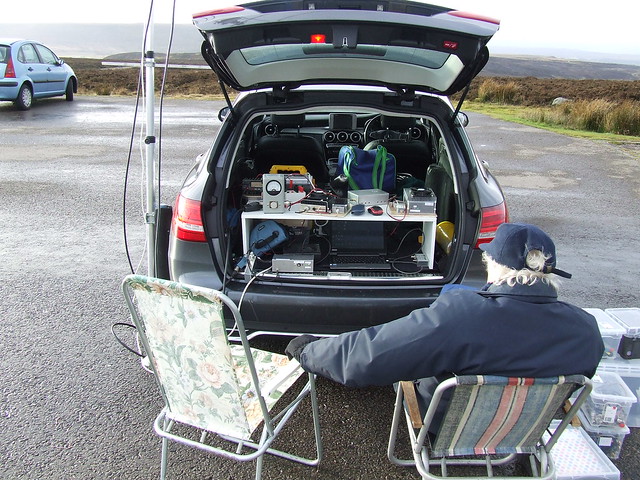 Dave G8GKQ and I went to the Isle of Wight - arrived on site at 10:45 having had a bacon butty on the ferry

The Wx was good all day and conditions seemed slightly above average. 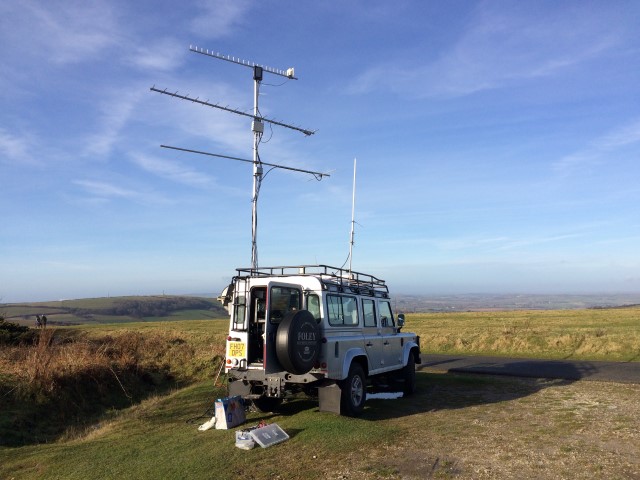 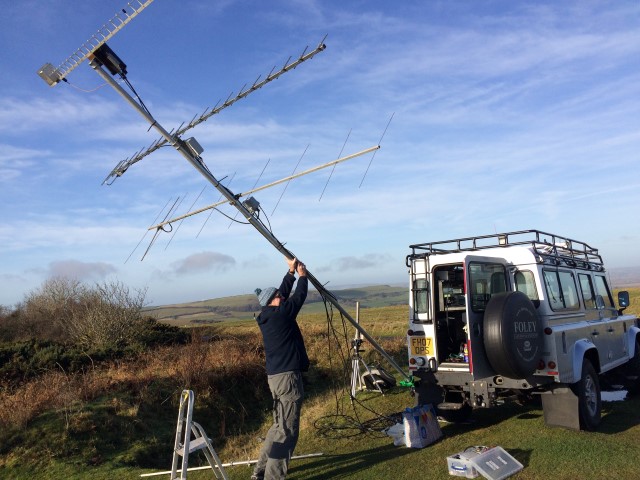 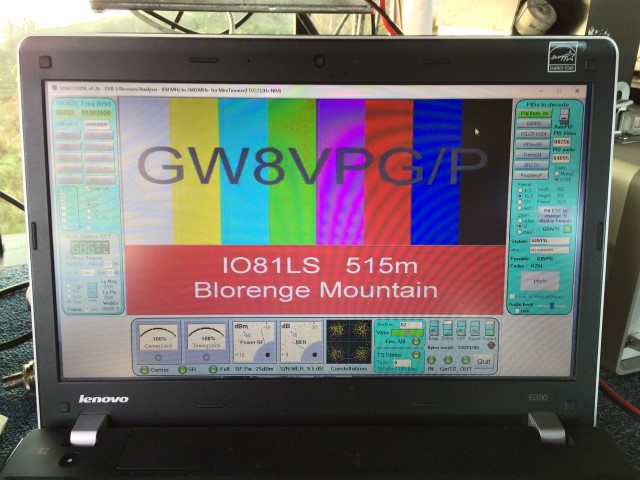 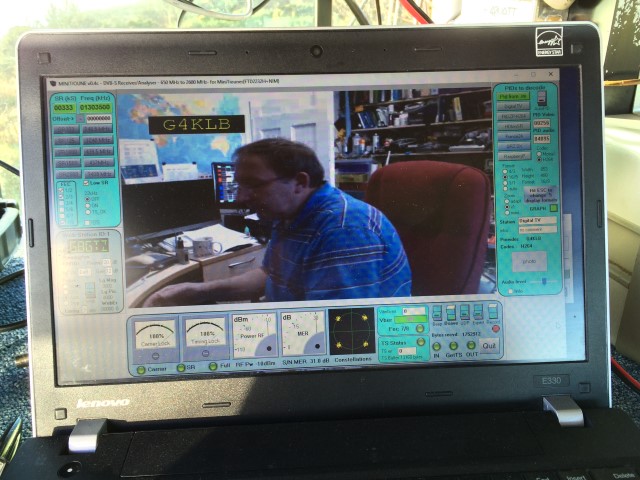 Experienced problem again with SPF / PGA103 wide band pre-amps and the winter project is to resort back to old fashioned tuned circuits. Running 4 bands /p means a lot of kit and complexity and did not manage to use DXspot to see if others were around.
Great fun was had by all and the 220Km one way contact with Brian was over an obstructed path and shows greater distances can be worked if we have time to wait for the right moment...

The plan was first to go to a site between Anchor and Bishop's Moat on the Kerry Ridge, which runs along the Welsh border. This site has the advantage of being able to see Holme Moss in the Peak District, which is also visible from the North York Moors, giving a 250km+ path. I tried to get to this site back in May, but turned back due to the bomb-cratered nature of the road.

This time, I chose a circuitous route from the east and south, along several miles of isolated single track roads. I had visions of breaking down and being found as a skeleton several months later. Progress was slow in parts, due to avoiding the raised, grassy ridges in the middle of the roads. I've always been wary of these since losing my sump while foxhunting deep in the Clocaenog Forest. **

I heard Rob M0DTS at good strength on the magmount as I was approaching the site, but there was nowhere to stop. I was doing well, until less than 400m from the site, I encountered this double lake in a dip on a muddy bend. 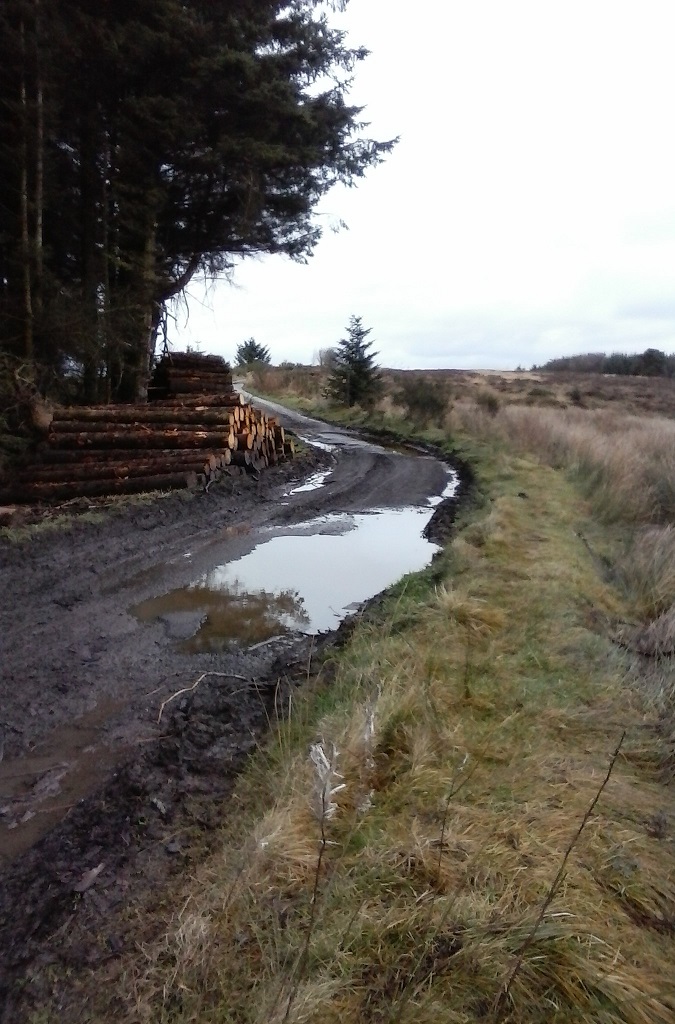 It doesn't look so bad in the photo. I did some depth measurements with a tree branch, but while I was contemplating whether to risk it, a tractor went through and wobbled so much that it made my mind up. I went to the backup site which was 800m but 25 minutes away, to find that the view was obstructed. The very tall Google Streetview camera strikes again. I decided to abandon this area and proceeded to Clee Hill near Ludlow, about an hour away.

At Clee Hill, I spoke to Shaun GW8VPG/P at Blorenge Mountain in South Wales on the magmount, who was a reasonable signal. The south-easterly takeoff for G8GTZ didn't look very good, so I went further up the hill, but Shaun's signal went down. I went back down and parked up at IO82QJ84CR, 468m asl. With the 9 ele Tonna deployed, Shaun was a huge signal and a two-way 146MHz, SR333 contact was easily achieved over the 86km path.

I then spoke to Noel G8GTZ/P at Ventnor. There was random QSB between S0 and S9, but I managed to receive his 146MHz, SR333 pictures over the 220km path, as they faded in and out. Maximum MER was 4.5dB. Unfortunately, he was was unable to receive me, but it was very close to locking on.

By that time it was past sunset, so there was no time to try moving to a better takeoff.

It was a very long, but fun day out. Thanks to all involved.


** Have you ever tried calling a rescue service while out in the wilds? "I've broken down in the Clocaenog Forest". "Can you give me the name of the road". "It doesn't have one - I'm in a forest". "Can you give me the postcode". " There isn't one - I'm in a forest. I can give you NGR, lat/long, QRA". "No, we don't use those". I had to get a lift back to the pub on the main road and meet the breakdown truck there. 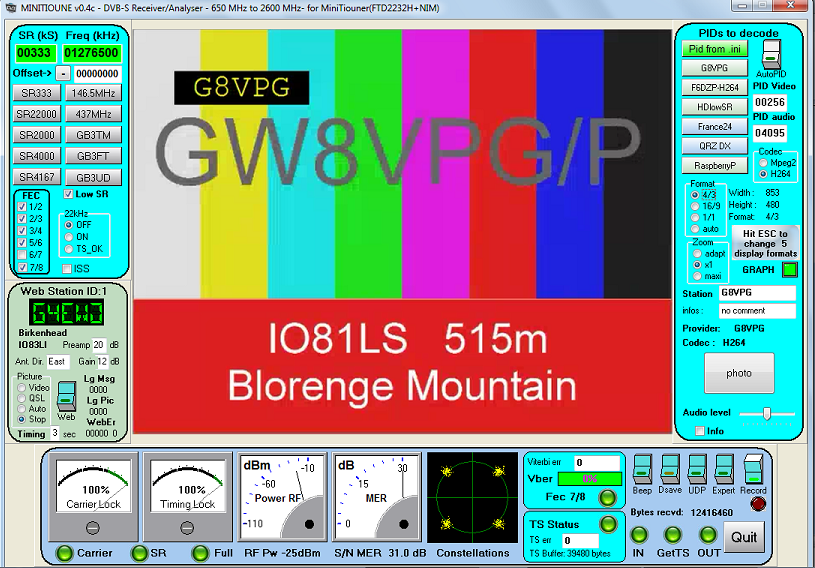 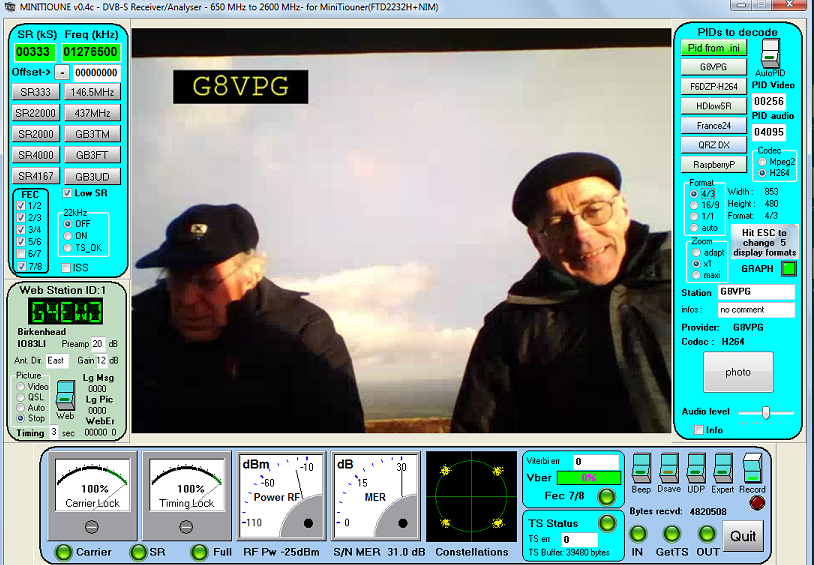 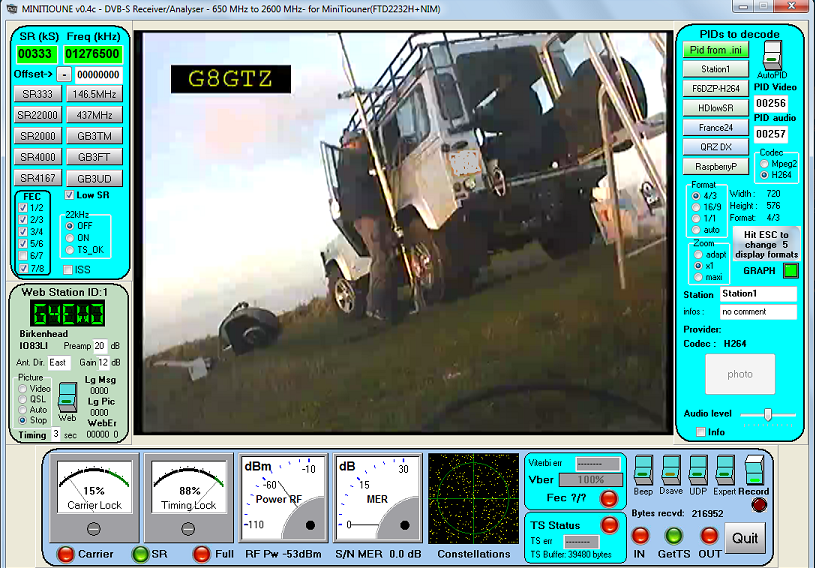