If you told most radio hams that you went out for a field day and had 3 half contacts and that it was a really good day, they'd probably think you were crazy.

The main intention of going down as far south as Newtown, Powys was to try a 250km path on 2m to M0DTS/P on the North York Moors. The road to the site seemed OK on Google Streetview, but as it went on, it looked like the lads from RAF Valley had been using it for target practice and I turned back to the secondary site which had a southerly aspect.

The area must have been cut down recently, as Google showed it as heavily wooded. This made it possible to go up a track into the former forest and take advantage of more height and a metal gate to support the mast.

I received 3 stations on 2m RB-TV. I must get the PA built for my DigiThin. G8GTZ/P on Dunkery Beacon, Somerset was a huge signal over the 148km path and was pinning the MER meter for most of the time. GW8VPG/P near Chepstow was showing about 9dB MER over the 94km path and G8GKQ/P was showing 6dB MER over the 173km path to Walbury Hill, Berkshire.

There was periodic disturbance on reception which was similar to radar on 23cm. I don't know where it was coming from as there were no PMR masts in sight.

All the paths were very obstructed and I had visions of a completely blank day, in all senses. The path to G8GTZ/P had a pointy location on the Brecon Beacons line of sight to both ends, so that probably helped.

Thanks to all involved.

There are more screen grabs and transport stream captures at http://tinyurl.com/hdqjdar *** link broken *** 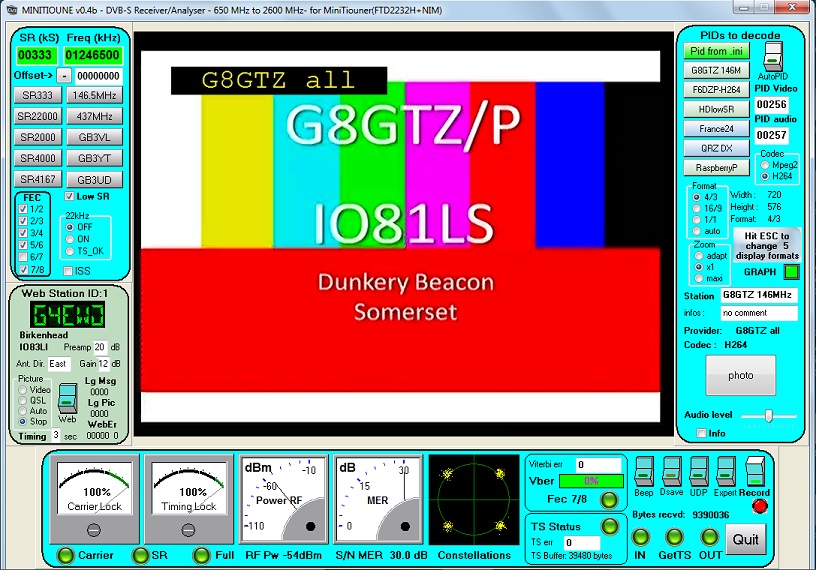 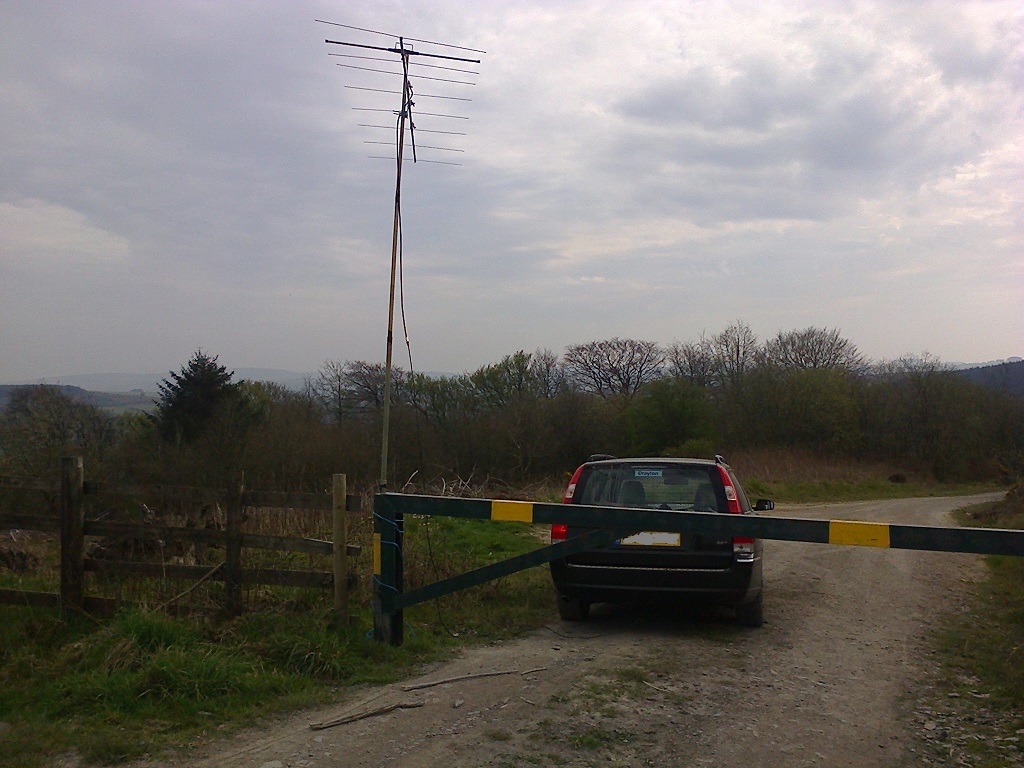 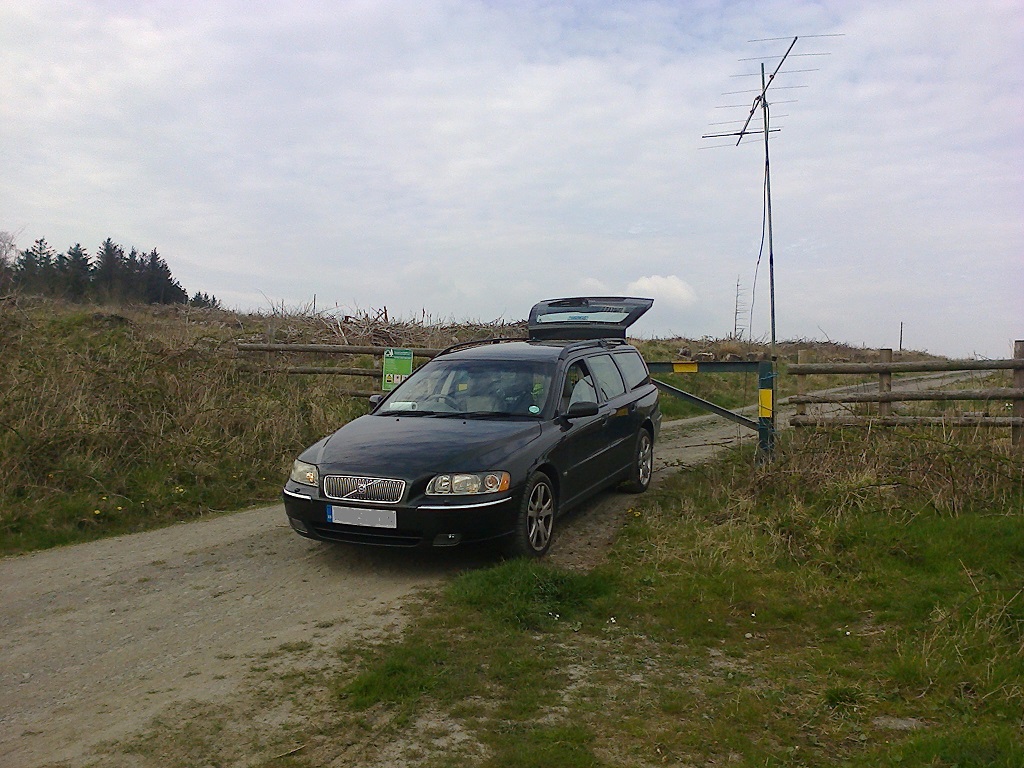 Four of us from Bristol (Viv G1IXE, Ivor G1IXF, Martin G7NYS & Shaun G8VPG) went out to a site north of Chepstow racecourse on Saturday. We were intending to test our new 146.5MHz equipment that we have been building over the past months. My receiver mis-behaved, as did a new 2m/70cm transceiver for talk back, but luckily Ivors equipment worked! My transmitter worked very well though, using the Mitsubishi RA60H1317M1 module, which I believe Noel & Dave also are using. We had two very good two way contacts with full scale MER both ends; G8GTZ/P 77.5km & Dave G8GKQ/P 114.6km and two one ways; GW4EWJ/P 94.4km MER10 beaming through the Black Mountains and G8XZD local in Bristol. Thanks to everyone that made the effort to work us. As we drove down the hill on the way home, the heavens opened!
73 Shaun G8VPG. 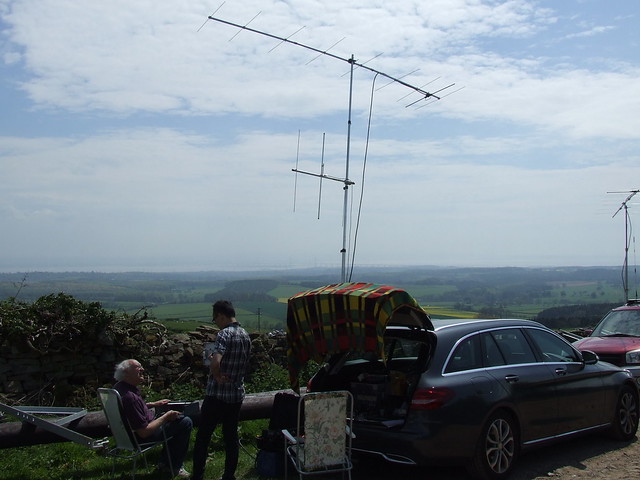 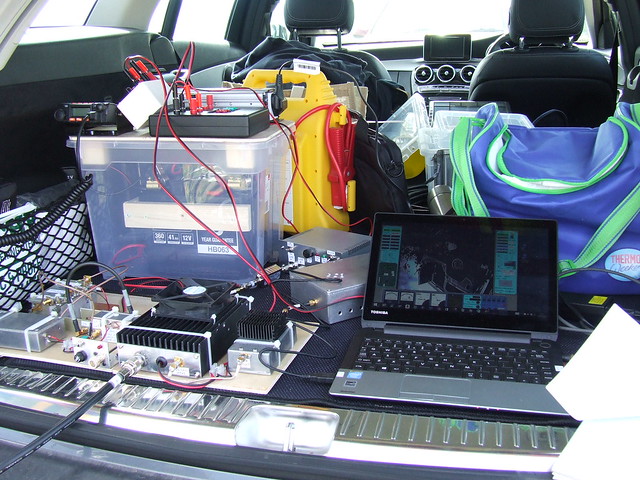 I went portable on the Saturday to IO94MJ.

Unfortunately there was poor tropo and little local activity so no QSO's this time.

I was watching GB3YT,GB3VL and txing through GB3KM at times.
Later had a few QSO's on 23cm and 3cm SSB around the country during the SHF contest.

I have found a fantastic web site for calculating intervisibility plots and link budgets. It is written by an Australian Radio Amateur. You need to register and obtain a password, but it is free for amateur use. It is called RadioMobileOnline; http://www.cplus.org/rmw/rmonline.html
I have been playing with it all morning. You can save all your sites, so you only need to enter them once.
73 Shaun G8VPG.
Top

Thanks for mentioning that Shaun,
I've been using the pc program of Radio Mobile for over 10 years now and it's great... but I'm probably using a very old version!

Will give the Web version a try.

Yes - also been using Radiomobile for a long time (I believe my original basic user guide is still on his website), particularly to do repeater coverage plots.

It's a nightmare to set up and get familiar with but really useful once you've mastered it. Perhaps we should have a topic on it in the wiki and also allow people to upload their .net files....

I also find this topographic map based on Google map is very useful for finding high spots http://en-gb.topographic-map.com/ along with a few other tools I've listed on the wiki https://wiki.batc.tv/Mapping_tools

Don't forget we are trying to generate a directory of portable sites on the wiki https://wiki.batc.tv/Directory_of_portable_sites and also building a Google map to show the potential sites https://www.google.com/maps/d/edit?mid= ... -HE2sxqL0c .

All contributions welcome and I'm putting any sites I find (eg when people post where they are going /p for microwave contests) on to the Google map first and hopefully we can build a wiki page later.

I've been using the downloaded version 11.6.0 of Radio Mobile for a short time. I found it quite confusing at first, until I took the training course from Rob.

I've noticed that when entering the lat / long manually for a new unit (station), when it works out the height automatically, it's often wrong - sometimes way off. If I draw a very small base map, the unit is in the correct position. I then use 'place unit at cursor position' and it sets the height correctly. Doing it that way, the height is very close to heywhatsthat.

It may be down to resolutions, because it changes if I change scales. See if you can reproduce this:

Restart the program
Draw a base map 300 pixels wide, 600 pixels high, height 500km, centered on 53, -2
Manually enter the location of a new unit as 53.123456, -2.123456
The elevation is automatically set to 269.1m
Draw a base map of height 0.1km centered on the unit just entered
Move the cursor around the centre of the map and the height in the bar at the bottom is around 310m
Click on the middle of the map, edit the unit and 'place unit at cursor position' and it then shows the correct height

You could also do it with a known position, but it always gets the location right. 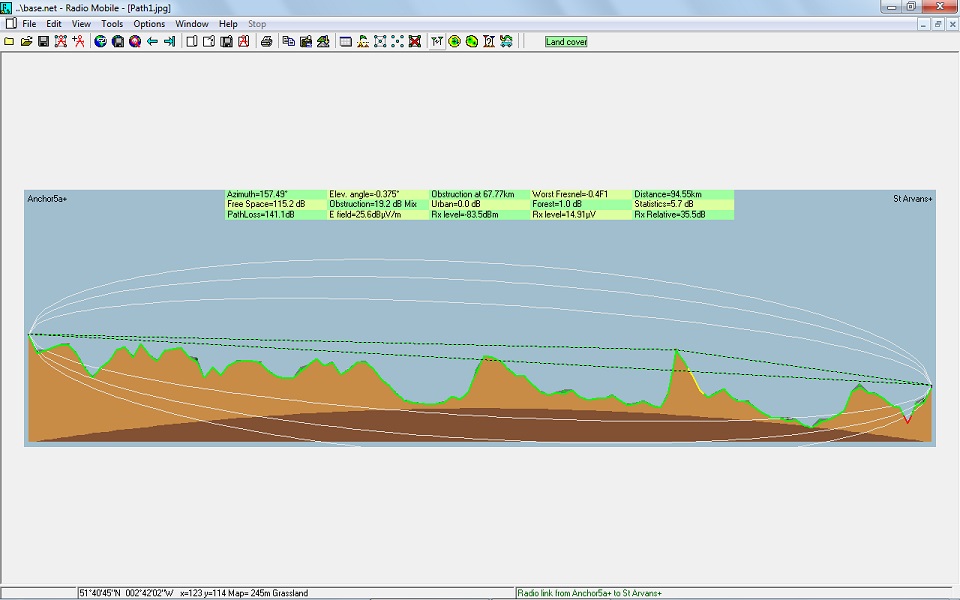 That looks like it is down to data resolution.
The heywhatsthat plot has a tall peak which radio mobile is not seeing.

Here are my results for the path from Anchor to St.Arvans, using the online version of RadioMobile; 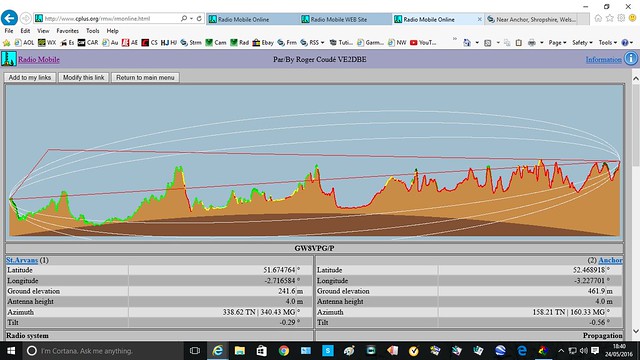 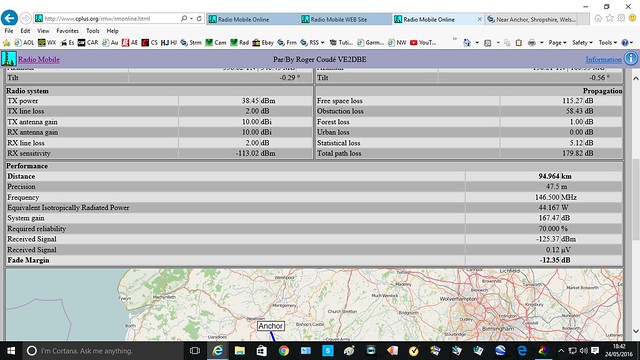 Still getting used to using the programme and the rather convoluted way of pasting images on the forum from Flickr!
Has anyone thought about 11-12th June yet? I am hoping to go to the Blorenge Mountain, South Wales, 515m asl, nearest town Abergavenny.
Shaun.
Top
Post Reply
24 posts