I am busy boxing the 24V PSU I showed on the net (the one apparently without power factor correction) and plumbing in that 6m/4m PA. I will need an additional filter for 6m as the 2nd harmonic needs to be very very low to avoid interfering with broadcast FM signals. The 4m harmonic is well down already but the need to keep within the 100W ERP limit means the PA is only producing 10W on 4m so it is pretty clean anyway. Actually I hardly need it as the RA module 4m driver can deliver 5W. Maybe if only we could do 66ks in the standard band. I should be much stronger on 6m where the 100W ERP limit doesn't apply. Perhaps I could amuse myself making a filtered pre-amp for 6m.

I think the next amplifier will be 200W on 70cm based on using the ex-DVB-T pallets, though I already have 150W so relatively it is not such a jump.

What an excellent day out, pretty much perfect weather too

This was to test my new gear on 10 and 24GHz, frequencies that a few years ago would have required a lot of protracted parts sourcing and more than a wing and a prayer to get (and keep) running.
We are lucky to have a thriving surplus market in 'obsolete' commercial gear, replaced for goodness knows what reason.
From our favoured Polish parts supplier (Bison Electronics) came two modules, removed from ODU's (Out Door Units, complete TRX systems usually mounted directly on the back of dishes and feeding the data down at a lower loss IF frequency).
Such was the source of my 10GHz transverter, a product of the now gone Cambridge Broadband Networks.
1 watt out at 10GHz, LO on 2012MHz with RX and TX IFs conveniently coming out at 2320MHz. Wiring and power supply information was found in a Scatterpoint article, thanks very much to Maarten PA0MHE https://groups.io/g/Scatterpoint/files/SP2108-A4.pdf Perusal of other internet forums found some discussions about the best LO and IFs to use to take advantage of what the system was originally designed for. As you can imagine, a Pluto will work well with this unit. The LO was provided by a slightly modified eBay ADF4351+keypad/LCD which proved adequate on 10GHz. A C/O relay was added as close as possible to the dish feed, built to this article http://www.w1ghz.org/QEX/circular_wg.pdf and all mounted on a 65cm offset dish I 'recycled' from the dump about 20+ years ago, when you could surreptitiously do such sensible things.
And it just worked.....first contact was with Dave G8GKQ and also Martin on NB FM courtesy of the wonderful Langstone software. With dishes aligned and tweaked (using my own Tilt-O-Matic) we switched to DATV and had a two way with MERs of around 20. Pleased or what

This was a first for me, thanks Dave. Swinging the dish around to Noel resulted in similar results with great signals both ways.
From the same vendor, a rather nice looking assembly was seen, offering a whopping 2Watts at 24GHz. This understandably produced a lot of activity and ways of making it work. Thanks to the work of SQ1GQC and others a suitable interface board (LO, TX & RX IFs'' plus the various voltages) was made available pretty much at cost. This was assembled with a suitable relay and even shorter SMA leads. With the LO being multiplied by 12 (1808) I did not expect it to be 'bang on frequency' so it took a bit of searching until I found Noels signal (450kHz high my end!). But it worked perfectly, a 2-Way NB FM conversation being had on 24GHz for another first for me. Signals were 5/9++ so as expected, a DATV contact then followed with MERs also around the 20 mark

Swinging the dish back around to Dave and peaking the signal resulted in similar reports.
As we all had the gear with us, we then moved to 5.6GHz. I was using a laptop with ExpressDVB software driving a Pluto, into a 10W amp and Gibeon Flat-plate antenna. Huge signals were reported from both stations. Moving over to RX, I used my 'dual conversion' system with a recent LNB and here I think, based on the described symptoms, phase noise resulted in much lower MERs from Dave and unfortunately no lock from Noel. Time to build a 'proper' system for this band.
Although you can still buy the 24GHz units (while stocks last) I don't think any more of the PSU boards will be produced, although the gerbers, are I think, available. Getting going on these 'extreme' frequencies used to be a dream, but is now a reality for me. Both the Portsdown (and its receive capability with minitiouner) and Langstone make this so very achievable.
Thanks to everyone involved 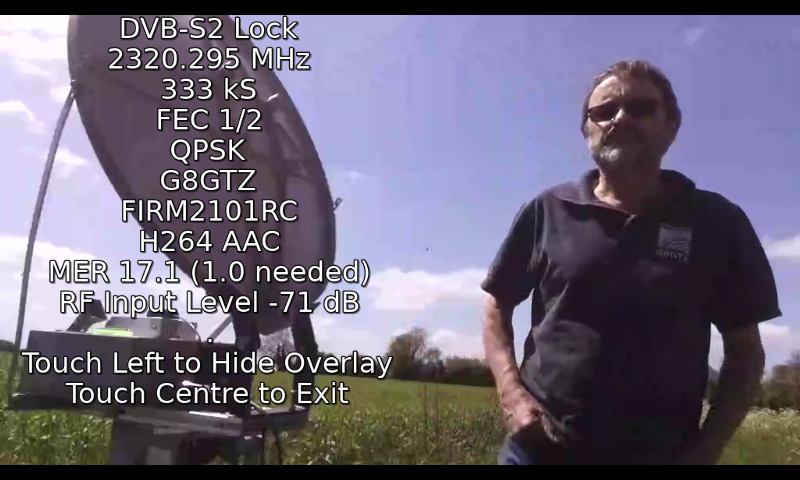 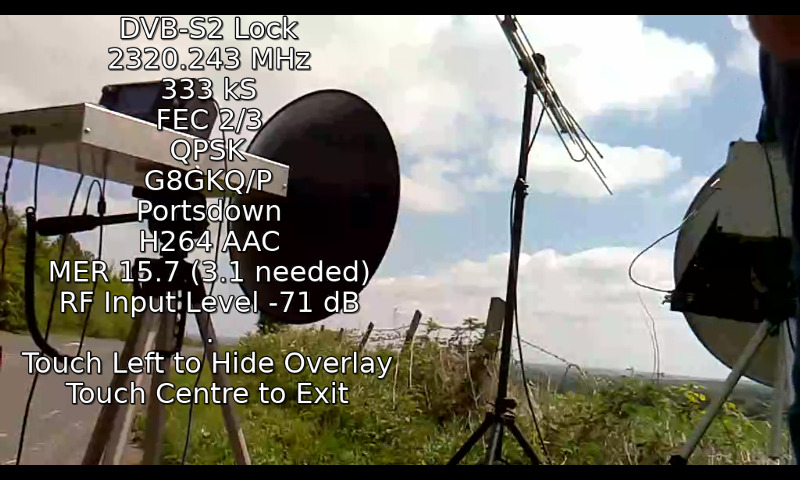 Great signals to and from Gareth G4XAT (Thruxton Hill to Butser Hill 52 km LoS), including the incredibly clean 5.7 GHz signal seen below on BandViewer.

The path to Noel G8GTZ at Hannington was only 31 km but double obstructed, however we did manage a 2-way on 10 GHz 333 kS; see the second BandViewer shot below.

Final prep for the Contest next month now underway. 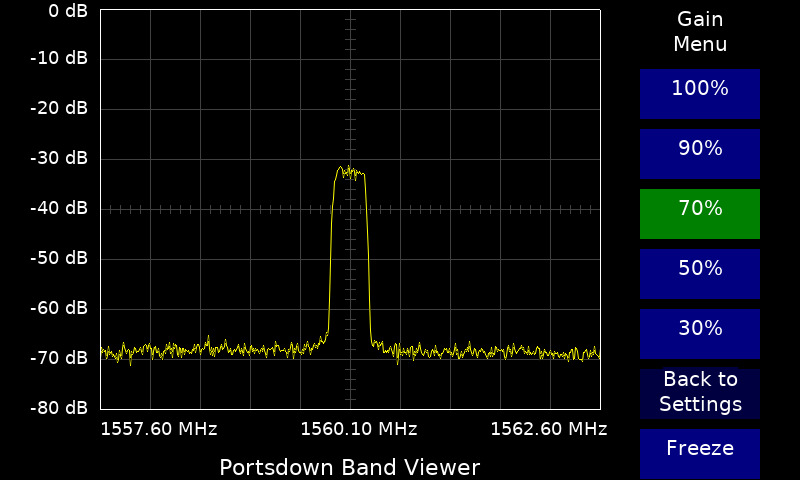 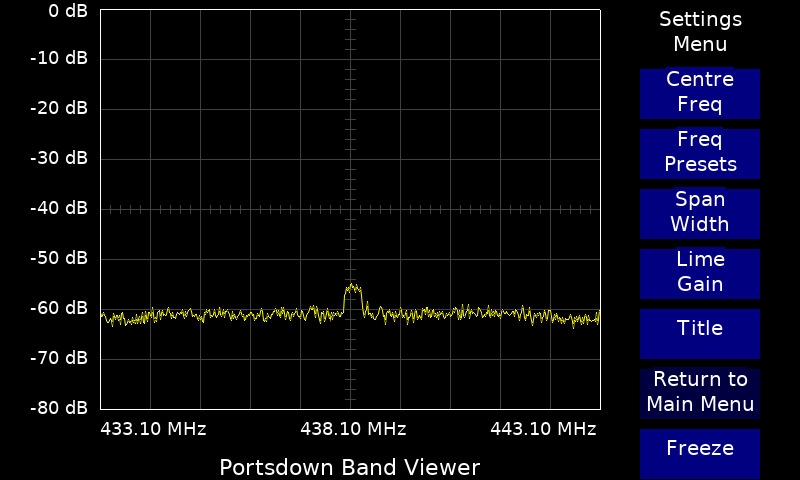 And the fun continued on Sunday

After surviving the rain and high wind (thanks to the brake on the Tiltomatic) on the Blorenge IO81LS for some 24 and 47GHz NB qsos (necessitating a trip to a superstore in Abergavenny to buy a towel to dry out the Langstone) i then moved to Notgrove IO91BV for some more NB qsos inbetween the rain showers. As I also had the PortslangXV with me, I christened it with a two way 24GHz 333kS DATV with Noel G8GTZ/P at Walbury at 67km 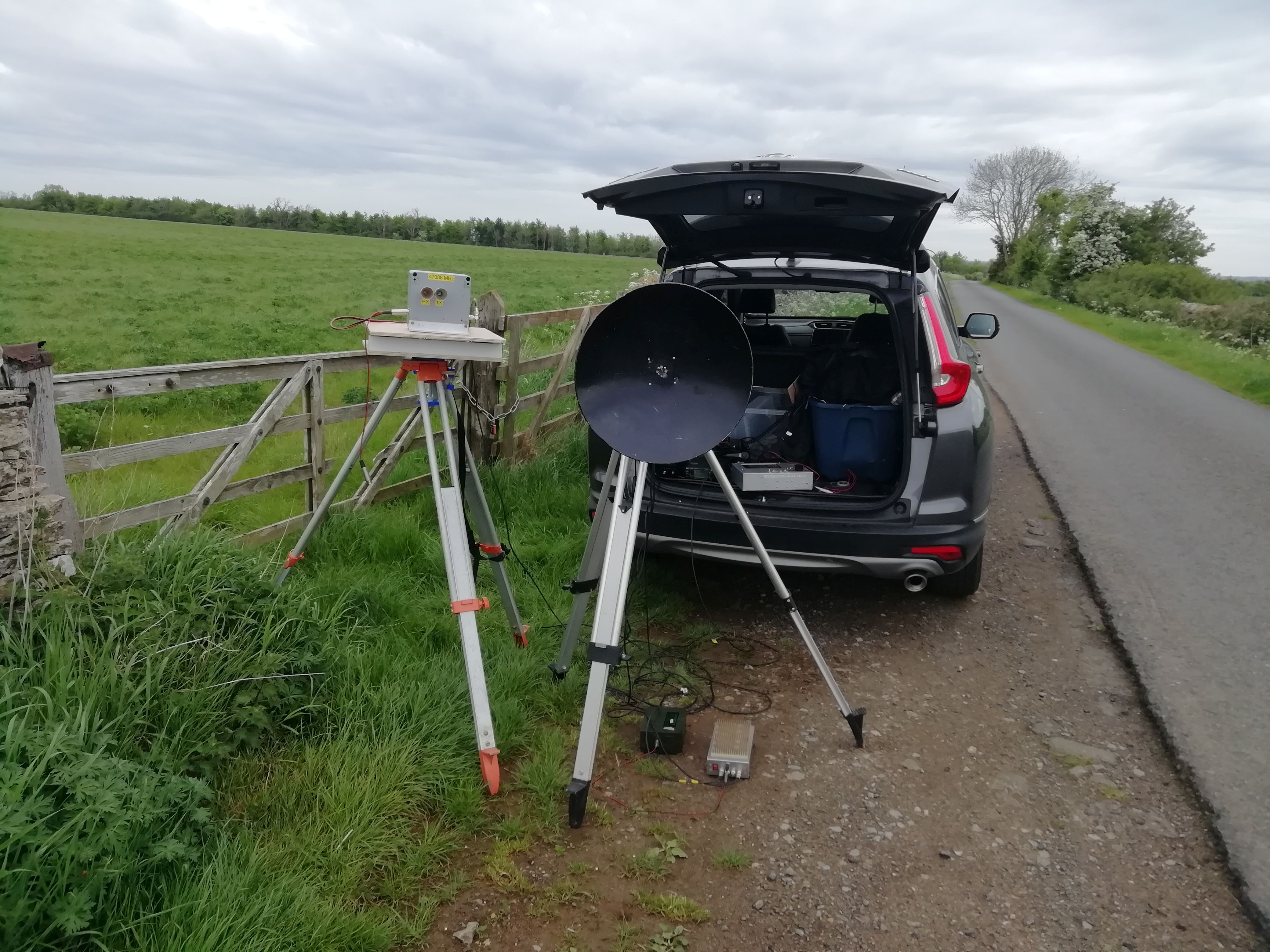 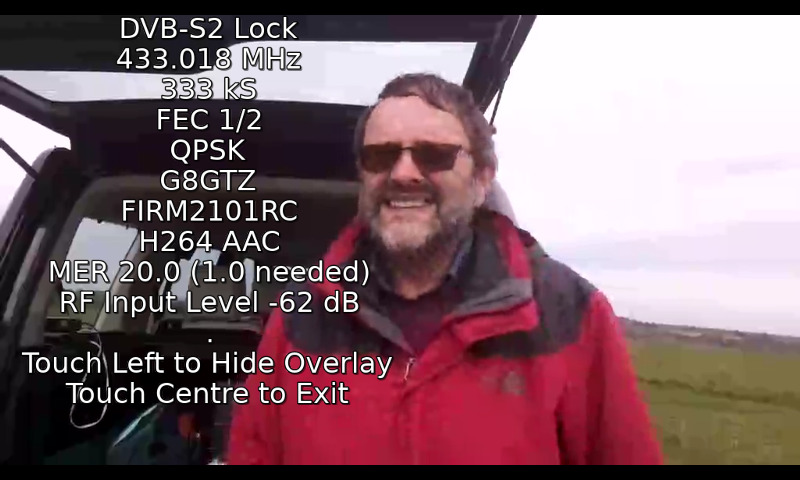