by G1LPS Terry
I have now made an application to add a 3406MHz Digital output to GB3KM.
Path plots show good coverage of the current user base.
It is hoped that those that can access the repeater now but can not see it due to Wifi etc. will be able to see it on 3.4ghz. Its planned to start some test transmissions from the site ASAP.

by G1LPS Terry
The work on the 1u rack unit that will house the Digilite tx and 3.4ghz upconverter is under way.
Upconverter board mods underway.
20w PA has arived. Feeder is run from the mast to the rack
Digilite board, LO board are ordered. Everything else for digilite still needed

Anyone in the group who has unwanted spare components left over from their Digilite builds, please consider donating them to the build.
Funds are now running very low.

Wanted also a Haupage PVR -USB2 for a good price please keep your eyes open for one. (system will run from a netbook so must be the usb version)

I now have a WinTv PVR USB2. on its way
Contoller board for Digilite has arrived.
Thank you Richard BYI for making us a special Hex file to display the 3.4GHz frequency correctly

Next the controller board build

by G1LPS Terry
The path between myself and Rob M0DTS on 3.4GHz DATV was checked tonight. Rob tx'ed about 200mw to a 18dbi patch antenna in my direction. I opened the attic window and poked a wave guide type C band lnb out (no horn just the bare LNB) it was still blocked by the roof in Rob's direction. Despite that Robs signal was instantly there at full quality and signal strength with a super picture. Wish they were all that easy hi. about 28km path.

.
Thanks to the group for the components and donations towards the KM 3.4GHZ build.
Terry G1LPS

by G1LPS Terry
Heres the latest update on the 3.4ghz DATV build
Last night I completed the Digilite controller and the Digilite TX board assembly. (minus the IC on the underside ofthe board which hasnt arrived yet)
Next job is to finish off the 3.4ghz mixer board mods and get it off to Rob to tune the filter.

by G1LPS Terry
Folllowing on from Rob and Charles sucess in finding a solution for a stand alone digilite system and not having to use a PC anymore. The MK808 Dongle has been ordered.
This will be built into KM's 3.4ghz rack.

by G1LPS Terry
Update
Had a break from the build. Rob had kindly modded the upconverter board for me.
Everything is in the 1u rack and I'm on with the connecting up as time permits.
Digilite is still to test and setup.

by G1LPS Terry
Had a break but been back at it.
The 3.4Ghz rack is now complete and ready for testing Hopefully this weekend.
Need Robs assistance in setting up the MK808.

Next goal is to complete an antenna next week in time to use the system myself in the Summer fun contest.
So hopefully a good chance for the KM group to test their RX systems.

The 3.4Ghz rack is now operational.
Thanks to Rob today for some fault finding and programming the MK808
A nice DVB-S picture was radiated across the shack. 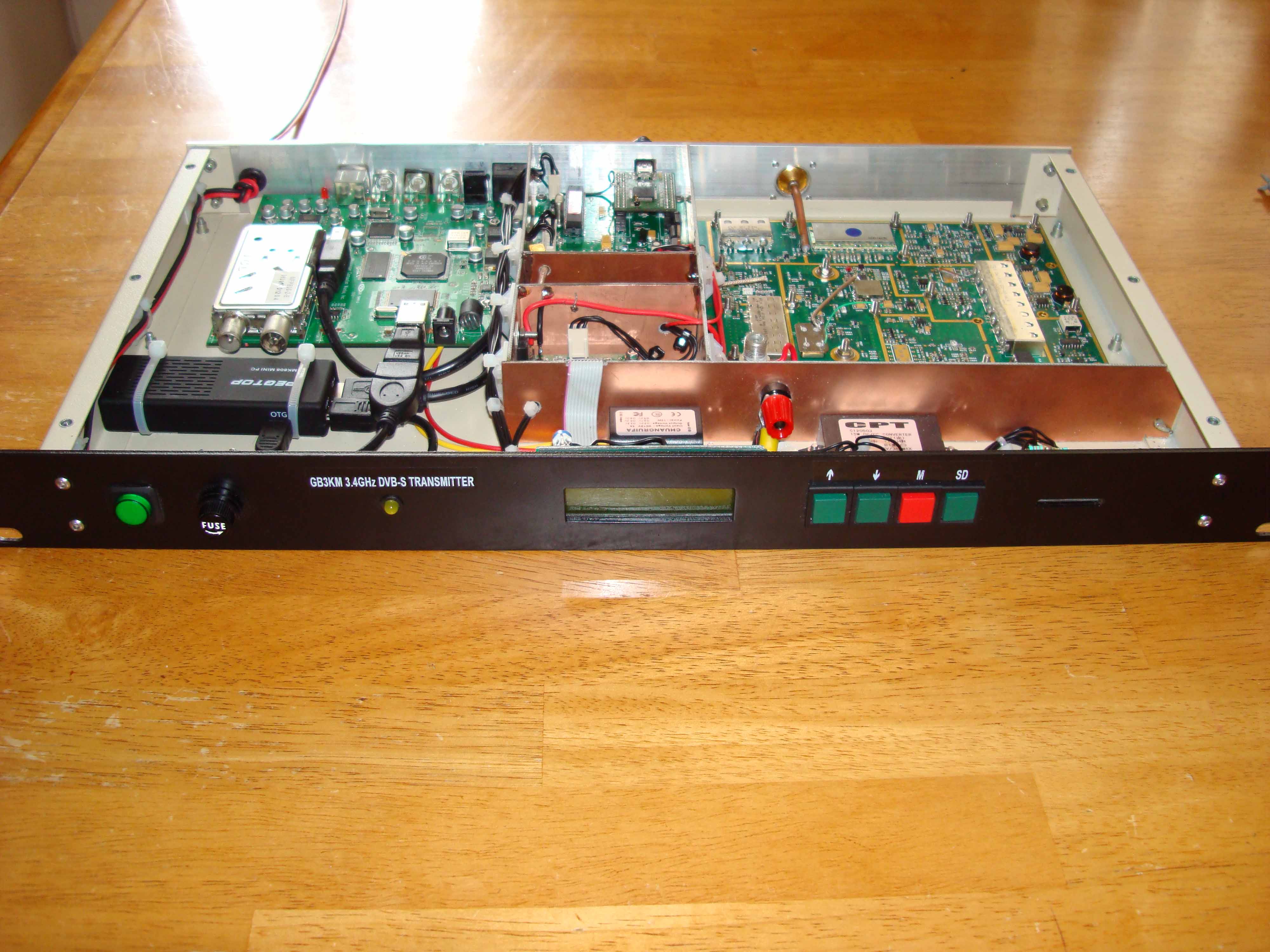 by EddieG0EHV
Looks nice!
Catch you on the contest tomorrow.
Regards,
EDDIE
All times are UTC
Page 1 of 2