Following two full weekends of engineering at the Cave Wold repeater site, GB3EY is back on air with the antenna now at 14m AGL. This is the height of the Alford Slot when the Versatower is lowered. It will stay at this height for a whilst we complete work on the new feeders for the other antennas on the tower (2 x 2m folded dipoles for GB3HS, 70cm colinear for GB7HU, 2m/70cm colinear for RAYNET use and 2m/70cm dual band yagi for DATV receive).

The height is now sufficient to clear some of the high ground to the west so I look forward to hearing reports from Eggborough and Barnsley!

The antenna height will be at least 25m when the tower is fully extended but for now the beacon coverage should be as below. Note that the coverage map assumes a height of 10m for the receive antenna with an isptropic gain of 18dB and a masthead preamp. 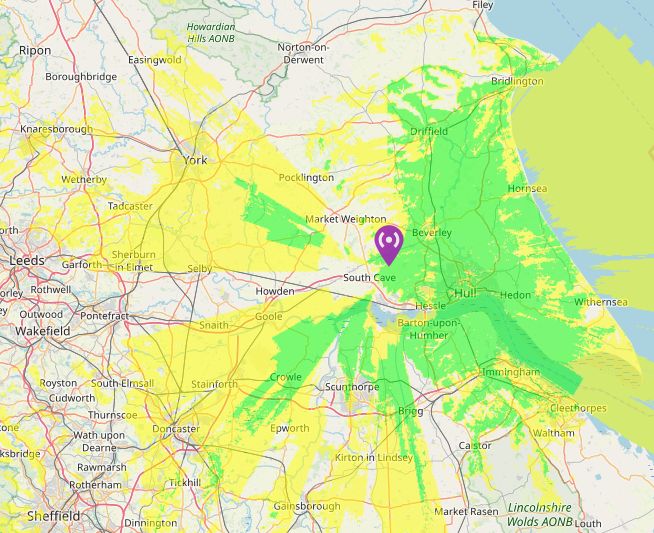 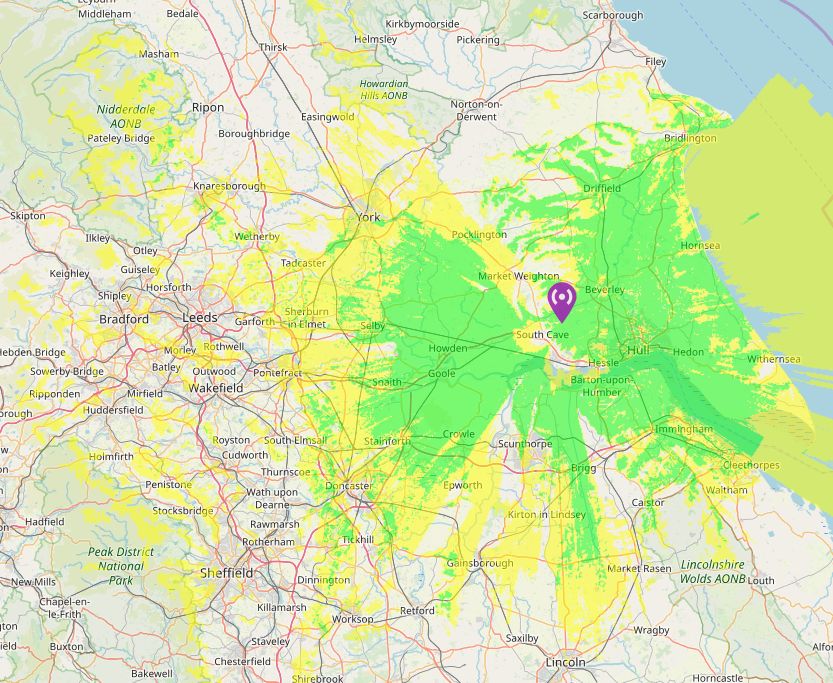 There's still nothing to be seen at Eggyborough I'm afraid Clive

not even a mark on the frequency waterfall at 1308MHz.

I'll take the gear out in the car to see if I can receive anything from any of the local high spots, unfortunately the highest (man made) spot is gated and inaccessible to us mere mortals
:
Dah-di-dah
:
Graham G8VAT
Top

But to be fair... My antenna can in no way be 10m AGL high, although the surrounding trees may be.. and for the time being there is no mast head amplifier, I rely on one in the shack..
:
Dah-di-dah
:
Graham G8VAT
Top

To make it a bit more realistic, I've reduced your antenna height to 6m and added 4dB feeder loss to replicate the lack of a masthead preamp. I've used an antenna gain of 10.8dBd / 13dBi which hopefully you can at least match, or better, exceed.

Even with 4dB feeder loss you should be getting 12.2µV at the bottom end which might just be enough for some receivers. Probably much better with a LNA between the feeder and the Rx. That feeder loss is the equivalent of 14m of Westflex with N plugs fitted.

It was interesting to see with the repeater's antenna at 14m, that changing your antenna height, starting at 1m above the ground, makes very little difference to the signal received. Putting the repeater to its predicted height of 25m makes your end much more sensitive to height such that the signal then triples from 1m to 6m AGL.

All the above assumes you have a clear path to the repeater but from what you have said it sounds as though you have trees in the path to EY. That is an issue as we have just found out. G4YTV is on a path from EY that follows the line of a copse and as soon as the leaves got wet the EY signal dropped significantly. 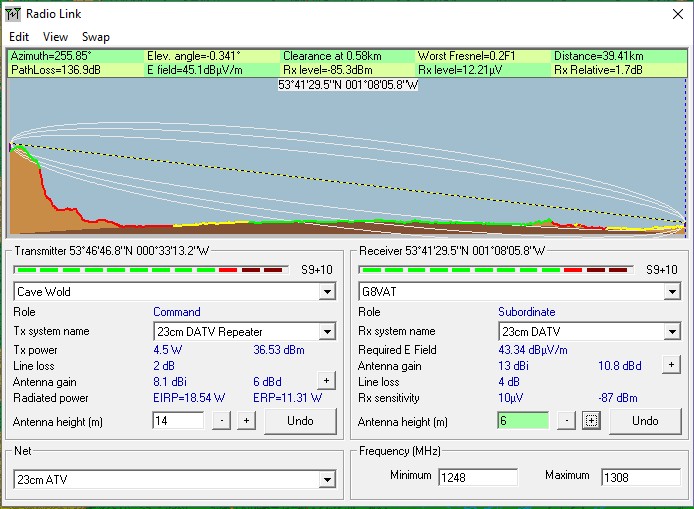 Cheers Clive, I was gonna say earlier please don't quote me Dbm or uV or whatever, I've never felt able to justify spending money on things to measure these sort of things..

But anyhow, I stopped on the Motorway bridge (the highest open point for miles around) on Monday with the receivers in the car and a Yagi and was amazed to see, bugger all. But there was a lot of it..

Tuesday was a complete washout, I didn't even attempt.

However, Tonight on the way home I had another look around at the Bridge and without any effort, there was EY... Yay! I'm presuming that some work has been done in the meantime?


So I just got back from a tootle around the local area with just the Alford slot, Bob Platts preamp and both a Comag and Satlink..

Here at IO93KQ, EY is a well locked signal on any East facing open ground, the lock disappears readily on the slightest movement. but behind any crops, trees or bushes, there is no hope...

At home I got my best Yagi out and using the Satlink and Bob Platts, had a good look around at ground level, trying to aim through any slight gaps in foliage, but there was nothing. At the weekend I'll head up to the roof with the best Yagi and Satlink for a better look.

There is no signal still seen on the chimney antenna at home.. I'll need a pole of around 10m got get an antenna above the trees (see Below).. but then EY is inevitable. 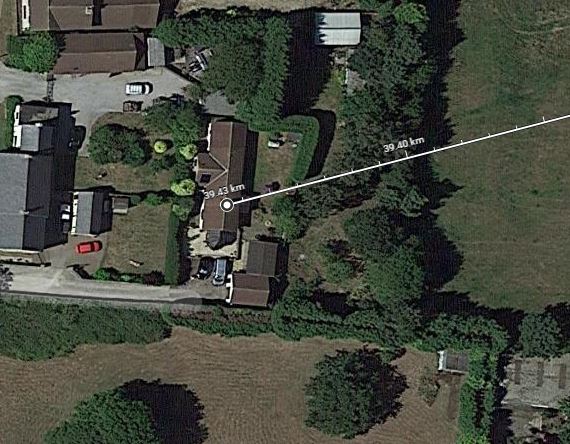 And again this evening on the journey home from Dewsbury.. Alford slot, Bob Platts and Comag.

I wasn't expecting to see anything so wasn't watching at which point the picture appeared, but by the time I was joining the M62E at Tingley (Jct 28) there was a stored image on the comag.. I'll watch a bit closer tomorrow.
Tingley roundabout is strange. It is slightly open to the North but otherwise blocked to any other area. I have however previously had pictures from YT whilst sitting at the lights on the roundabout, quite definitely enclosed by trees and buildings.. something must reflect signals down to the road level.

Then there was nothing more seen until just after Jct33 (Ferrybridge) where the land drops away suddenly to the East and EY appeared again.

I'll keep an eye to the ground while I 'm out and about and keep you updated Clive.
:
Dah-di-dah
:
Graham G8VAT
Top

I did a few more /p tests today.
With the current antenna height at EY i see much stronger signals on the North Yorks Moors, very stable signal too.
~17dB MER at IO94JF (but some multipath)
~15dB MER at IO94LI.

Yep, there was a signal lock and picture intermittently between Jct 29 and Tingley Jct 28 even though it is not wide open to the East.. But then on the drop down the slip road (now definitely out of sight) and right onto the roundabout itself was a completely uninterrupted lock and picture, there has to be something reflecting signals down to ground level.

I also called in Thornhill (Dewsbury) and got a well locked signal on The Cross and the top of Coombs Road (IO93EP). Not even at the top of Thornhill..

This is looking like a superb coverage (this is only a few miles from YT).. Local Hams may well get a choice of Two repeaters.
:
Dah-di-dah
:
Graham G8VAT
Top
Post Reply
8 posts • Page 1 of 1