The Bullseye LNB by Othernet is probably the most stable commercial LNB available. It has an internal 2ppm TCXO that is calibrated in the factory using the Red Connector on the LNB. In practice the LO is normally within 20 KHz of the correct frequency (mine was 16Khz Low). The short term stability is better than this so I asked the question on the Othernet Forum if it was possible for the end user to fine tune the LNB. Whilst this is probably not needed for the higher sample rates it might prove useful for the narrower ones, and also for SSB use.

After some email discussions with Syed from Othernet and the LNB Designer Jon from SY Science and Technology they agreed to release the documentation for the frequency adjustment interface. This turns out to be a quite simple serial port but with voltage levels of 0 and +15V. Single character commands are used to adjust the reference voltage of the TCXO in approximately 200Hz steps.

I have designed a simple interface using an Arduino Nano and three push buttons which is able to adjust the LNB. Having done this my LNB is now always within 1Khz of the correct frequency at room temperature.
It is also possible to control the LNB from a PC connected to the Arduino USB port which opens up the possibility of automatic adjustment.

Full details, including the Adjustment specification, Arduino code and PCB design are in my Github at https://github.com/g4eml/Bullseye-Calibrator

Re: Adjusting the Bullseye LNB for even more accuracy.

Excellent Colin, especially as I now own 3 of them, two intended for /P work including SSB. It will be nice not to have to do sums on the hoof.....not my strong point

Yes it is a lot easier to look for weak signals when you know the frequency is reasonably accurate.
The TCXO will of course still drift a little with temperature but if you have an accurate beacon or other known signal to check against it should be easy to adjust the LNB occasionally. It remains to be seen how often that would be needed but I suspect it might only be once per day.

I have ordered a few PCBs and components to check my final design so I might have a couple of mini-kits available in a couple of weeks. I am not taking orders though as that gets too complicated, just watch this space. If someone is desperate to get it working the interface could easily be built on Veroboard.

Very nice. I would suggest adding a second connector or PCB to provide the bias T and also maybe extract the 25MHz reference so it can be set up in the lab. I guess if you have a 25MHz GPSDO you could use a scope to compare the two. That is assuming that's what it is adjusting using a VCTCXO and trimming its trimming with a DAC. They might alternatively be using a VCXO and also measuring temperature. I doubt there is a programmable synthesiser involved. If it is a VCTCXO the brave might put a trimpot on it.

I don't suppose there is any chance of them making a batch with C120 flanges rather than horns?

I did consider adding a bias T to the board but decided to keep it simple as I suspect most people will already be powering the LNB using their normal receive setup. Likewise I considered adding a connector for the reference output but I think most people will be simply adjusting to get the correct down converted frequency of one of the QO-100 beacons.
The 25MHz reference is already DC blocked and terminated with a 75 ohm resistor on the board, so I might add a test point so that it can be extracted and measured. The level is quite low though because it is taken directly from the TCXO output and attenuated to prevent any pulling.

The LNB is using a VCTCXO with the tuning voltage supplied by a PIC10 processor’s PWM output. That limits the resolution of the adjustment to about 200Hz steps. The rest of the circuitry is using an RT320M chip the same as the Octagons.

They did actually originally design the LNB with a Trimpot for adjustment. (I have a prototype one that Jon, the UK based designer, sent me to try) However the problem was making it adjustable and still keeping it waterproof. It also only had a single turn trimpot so accurate adjustment is quite fiddly. That seems to be the main reason for switching to using the PIC.

I guess a possible upgrade might be to replace the 2ppm VCTCXO with a 0.5ppm one but the adjustment resolution might then become a problem.

I doubt there is any chance of getting a flanged version, the market is too small.

I have just replaced my GPS Locked Octagon with the Bullseye LNB and gained about 2dB MER. Presumably mostly down to lower phase noise. The bullseye is accurate and stable enough without the GPS. It seems to stay within 1KHz and so is still usable for narrowband with the IC9700 as long as I net the transmitter to it occasionally. No hardship as I rarely use the narrowband transponder anyway.

As a side development I designed and 3d printed a replacement cap for the Bullseye that extends inside the feed. It has a push fit hole for 22mm pipe and makes it very easy to convert the Bullseye for POTY use. It is much more sturdy than just making a hole in the original cap.
If anyone is interested in the file I can make it available. 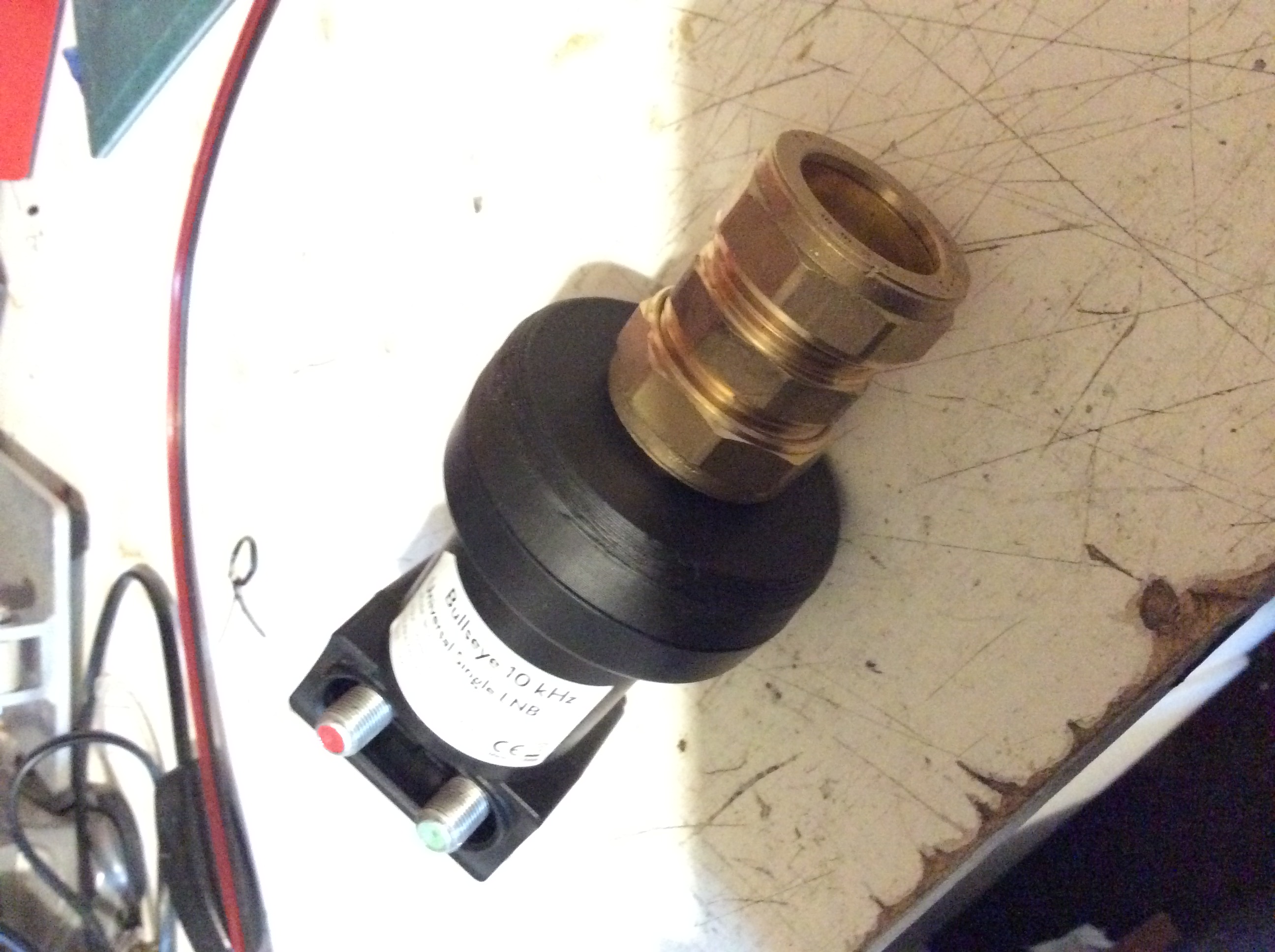 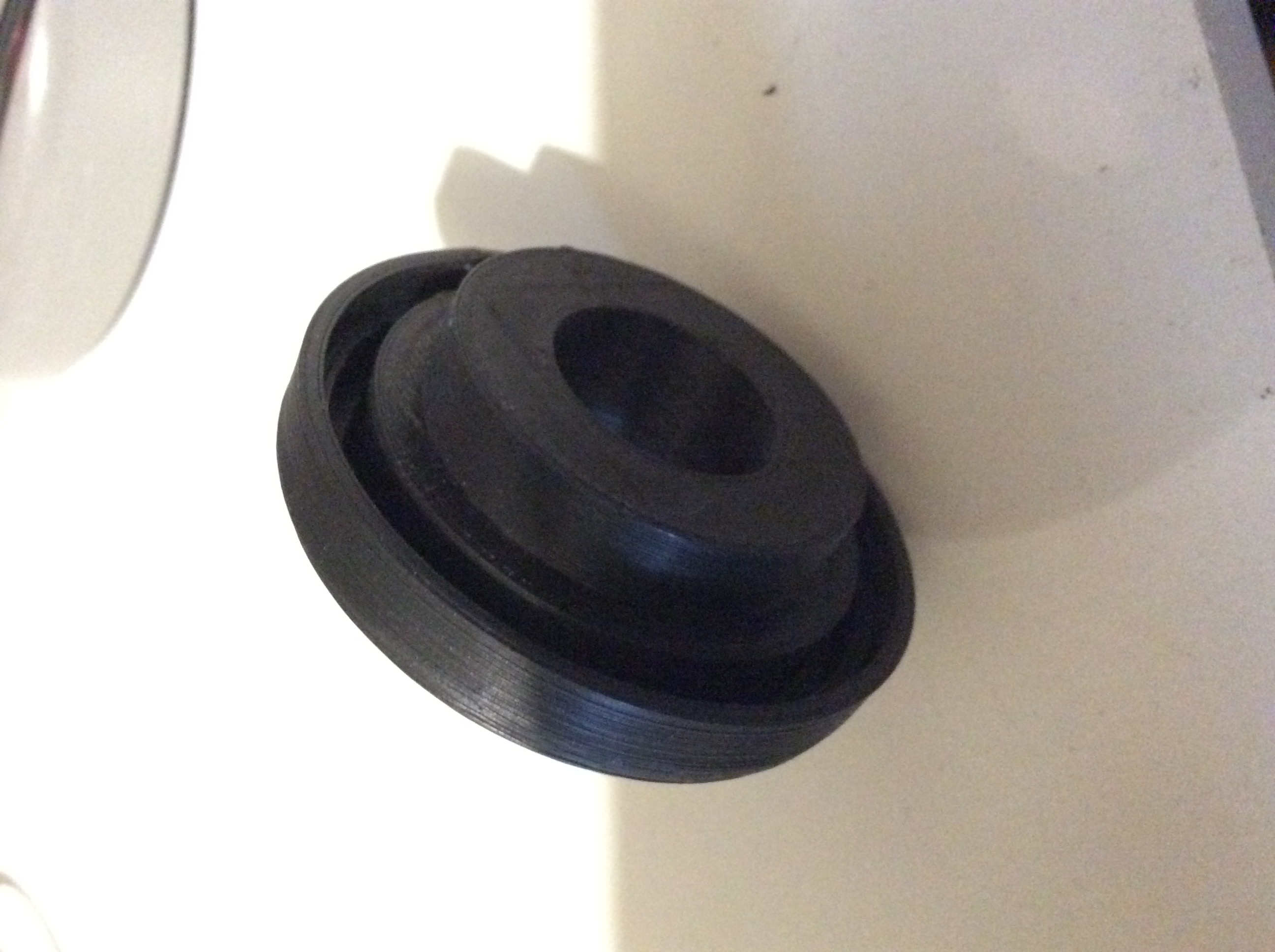 Interested in the 3D adaptor. I found my Octagon very sensitive to the exact reference frequency. Made a big difference to the MER. That's one of the reasons mine has a 9.5 GHz LO as it was better than 9.75 GHz.

I never experimented much with the Octagon. It seemed to work so I left it there. Maybe I should have done some more.

I don't think I can attach an STL file to theses posts so I will add it to the Github files for the Calibrator.

I am not sure if you have your own printer. if not let me know and I can print one for you.

Thanks for the STL Colin, it works a treat.

That will be very useful. I have a 3D printer. What to print it with? TPU? PLA, PTEG?