In my pile of 'stuff' acquired over the years is a 3 element 4M Jaybeam (not mentioned in the BATC copy of their catalog found on the wiki).
Is is in excellent mechanical condition other than the 'balun/matching link' was cut off when it was taken down.
The internet suggests that I need a 1/2 wavelength of coax between the two halves of the dipole, but despite careful measuring of that its clearly isn't right 5.0:1 VSWR.
Next step might be to try a 1/4 wave, but I'm in the dark really. Later units had a coil of wire on an aluminium tab, so a 'bit of inductance' I assume.

I've also got a single Jaybeam 2M folded dipole and a LOT of elements with brown, black and ?yellow' end caps, possibly from the cannibalization of multiple 4 element units. I have a spare boom that could take maybe 8 elements, if I knew the spacing/element lengths.

Has anyone got relevant dimensions or drawings?

Thanks
Picture shows the 4M coax tails, middle one looks 50R, outer two 75R. But how long were they supposed to be? 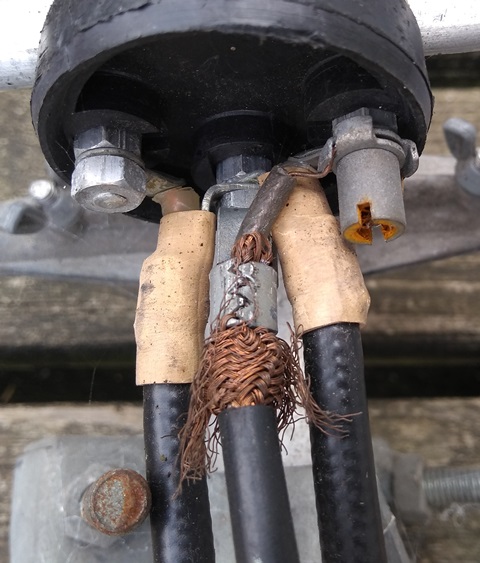 All three coax braids go the the centre lower nut which is common to the boom and the centre bottom of the folded dipole driven element. So two folded 1/2 waves?
Thoughts and suggestions welcome....
Gareth G4XAT
Top
Post Reply
1 post • Page 1 of 1