by G4EWJ
I hoisted a 24dBi panel with a converter above chimney level and this is what I saw. The narrowband section has heavy QRM from SRDs. Apart from another signal off to the right at 5810, the rest of the band seems clear.

by 924aussie
Thank you, haven’t had the problem, just curious knowing that there is a group that meets about two klm away at the local airport once a month

by G8JAN
Don't forget guys the serious hobby drone operators are probably not going to stick to 25Mw! Like us they want more power. Just read the drone operators posts many want to extend the range of their airborne video signals either by increased power or use "beam" antennas. Hence the hobby suppliers are selling 3 watt amplifiers and gain antennas. Which of course is where we came in.

In high usage areas there may well be a conflict but I think it's something we'll have to live with if they use analogue video. I don't live in a high usage area but I'm slightly concerned in that the police are using drones here on the Fens. Apparently their video downlinks are digital into mobile phones via the internet but I have no idea what frequencies they use. So far I haven't detected any "hash" in my screens.

by G4CPE
I transmitted into GB3TZ on 5665MHz this afternoon and expected to see the usual heavy interference on the picture.
But to my surprise the picture was P5 and not a trace of the interference that we have had ever since we installed the receiver on the mast.
I have no idea why the interference has stopped but I hope it does not come back.
73 Arthur
G4CPE

by M0SKM
GB3TZ 5GHz input still working well. I can get into it with my hand held Wi-Fi antenna looking through the closed shack window.

Perhaps others have complained about interference and the offending kit has been shut down.

by g8vpg
After being bogged down with various non-radio projects for the past few months, I have now completed my 5.6GHz FM ATV transceiver. I found a Tarot transmitter module with an output of 1W, which includes a small cooling fan and its runs very cool. Using a Bird 1.1-1.8GHz 5W slug, it indicates 0.5W after the relay, so I think it must be producing somewhere near the claimed output. I hope to be taking to the hills around Bristol soon to test it and hopefully work some of you who are also on this band.
73 Shaun G8VPG. 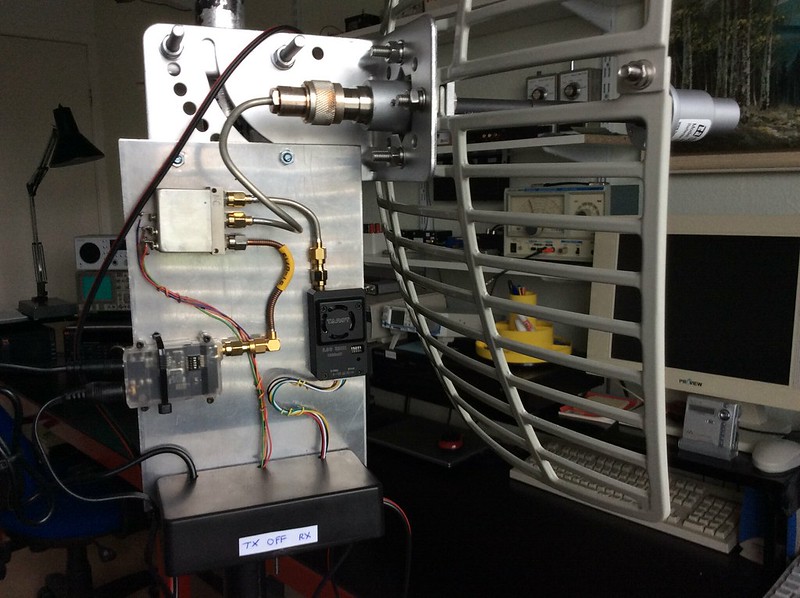 by G8DKC
I have a professional grade 5 - 6Ghz 15dBi vertical on GB3GQ (looking for a better repeater site, once tested and up and running).

In the future maybe the community would prefer a horizontally polarized antenna?

Dual diversity receiver and both?

by M0DTS
A fairly short notice test on 6cm today:

An enjoyable outing and a fine day which makes a change!

G0RPH and G8AGN were portable at Ringinglow lay-by Sheffield, i was on the Moors at Saltergate lay-by nr RAF Fylingdales.
It's 124km path so a little short of the Southern DX achieved but very easy.
I was using Tarot modules on Tx/Rx for the first time and 80cm dish.
My 6cm PA still has an issue if i run it for too long so will need to fix that!

Good video both ways P4, P5 if you squint a little

At the end i tried my Tx with just the feedhorn (no dish) and 5W, i was still received P4!

Some screenshots from the video attached.

by g8gtz
I've just been asked what's the best 5.6GHz equipment and as it's a year ago since I bought mine I thought I'd better check before replying.

Any particular type of TX and Rx that people are currently using?

by G4uvz
Having had several PAs fail ..I now have the Tarot 1 watt tx which delivers nearer to 1.5 watts

Shaun G8VPG uses the same tx ..we worked each other on Saturday P5 over 101KM !

Adrian
All times are UTC
Page 5 of 15