That works fine thanks OM.
Top

yup thats got it Thanks

Just a few more of my idea's for portable 5Ghz tests. Shown here is the dish I purchased at Newark which has 3 rubber suction feet to hold it on the car roof (not while mobile I hasten to add!) 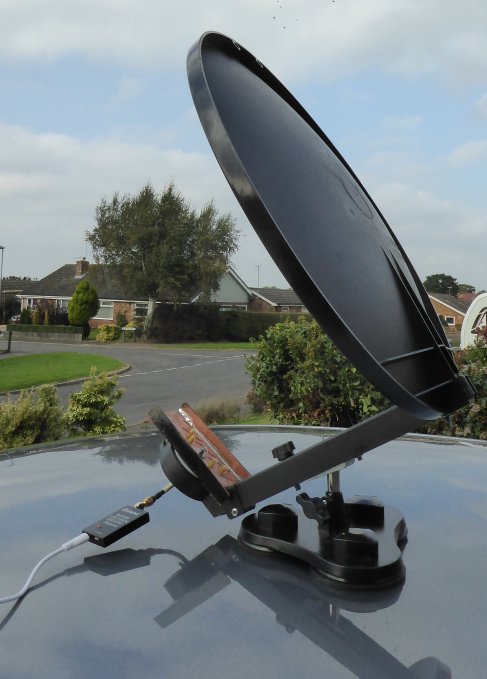 This is the scanning RX and shown below is the USB cable and the miniature 4 pin plug with AV composite out and volts in. 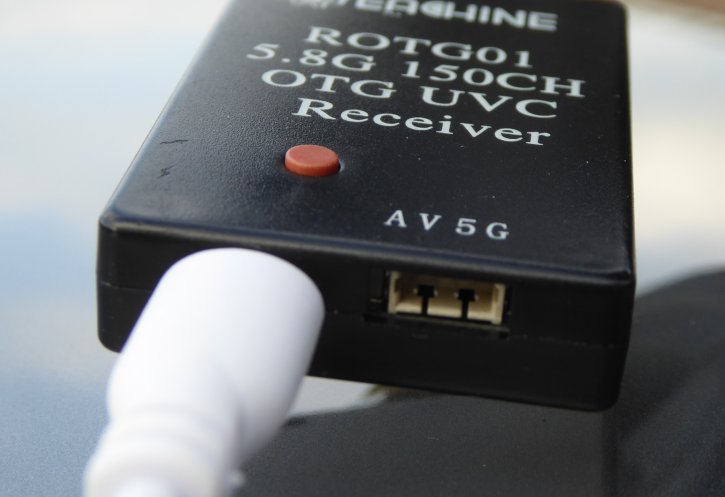 Carrying on from my initial post. The photo's below show the laptop screen showing the frequency read out while scanning,scan paused and locked on a transmission from my shack!
The next step hopefully will be some field trials to see how well or otherwise the system works! I just need some decent weather! 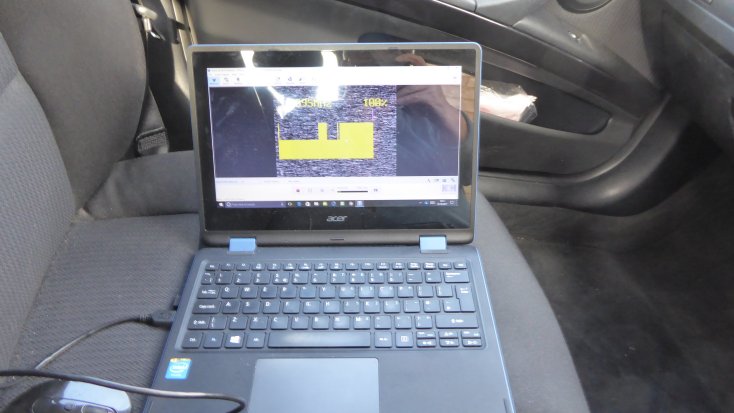 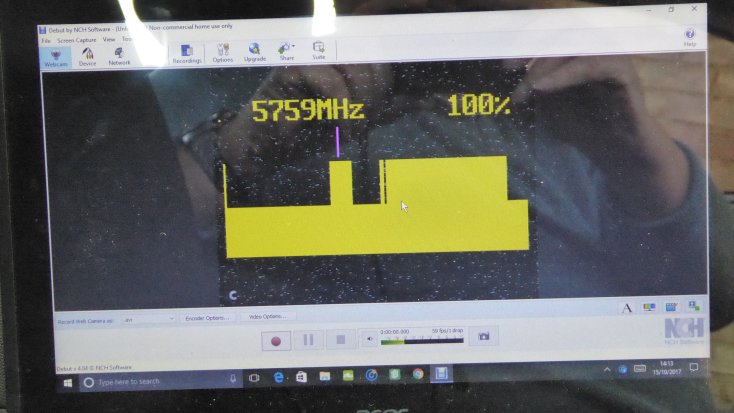 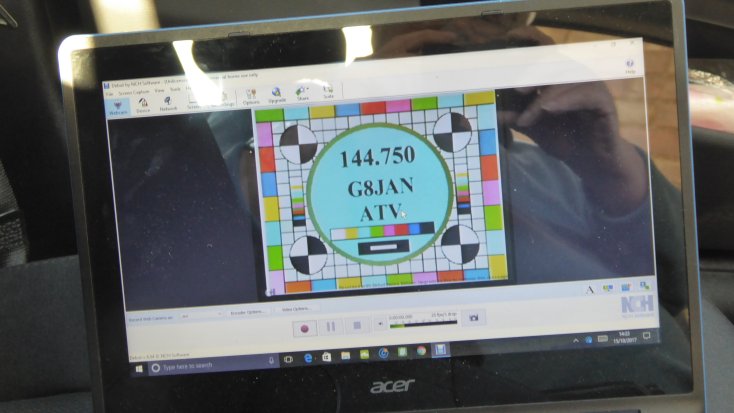 I got all mine lashed up last night. Works like a dream.
And I have one of the Eachine DVR's on the RX side. And as I was advised, it cleans up the sync really well.

Need to make a feed now and see what dishes I have archived behind the garage.
Though where I am, it's unlikely that even the Bournemouth locals are going to see anything from QTHR. So it's portable op's for me.
Top

Working the Bournemouth locals! I wish! My best ever 24 cms contact was with Dave G8AJN down that way when he saw what he thought was his own call sign through GB4IV ! Having determined he had nothing transmitting from his shack he suddenly realized it was my transmission from here in Norfolk! RIP Dave.
Anyway currently I've done one quick test which got about a P2 at just over a 2 mile obstructed path with just the small no gain antennas at each end of the path and 600Mw. I've located a fairly clear 4 mile path which I'll try with a panel antenna at each end. If I can find my transmission then I'll try the portable dish.

As we did many years ago experimenting on 10Ghz it's best to experiment over short distances first to prove the gear works and get a feel for the band.
10Ghz never ceased to amaze us even with just 10Mw so I have great hopes for 5Ghz with eventually a dish and 2 and half watts!

The problem here in sunny Norfolkshire is a distinct lack of hills, but maybe our local mountain rescue team can provide a map of a few locations ----if the're not on call out!
Top

Another small step for man if not mankind!

I realise 5Ghz ATV is well established elsewhere but certainly not here so I'm a voice in the wilderness as it were! The tests I'm doing may appear to be old hat by the well established members further south where there is a greater interest in ATV. But I'm posting my own findings simply to show other lone operators what I'm doing. OK great distances have already been achieved by others which I think is great stuff and very encouraging. My own efforts are puny by comparison but I'm at the bottom of a steep learning curve so please bear with me!

Last week I set up a 600Mw TX feeding into a panel antenna. My QTH is 17 metres ASL Take off towards the West over the Fens is the best direction for me, so having checked in Google street view I picked out two possible RX locations at 4.5 and 4 miles respectively. Previously using no gain antenna's I'd barely achieved 2 miles with a P1-P2 pictures! For receive I used the SCANNING RX previously mentioned but rewired to give stop scan and 2 Mhz stepping. It's a very crude system but I have doubts that in scan mode the RX will pick up a weak signal?
With the RX c/w panel antenna feeding into my laptop via the USB cable and using the NCH Debut software, I set out in my car to the 4.5 mile point.
For whatever reason I never even detected sync pulses! So on to the 4 mile point only to find the layby occupied by a sugar beet tractor! Damn I thought, typical Fen activity!
With the light fading I drove towards home looking for another suitable place to stop. Having no luck I parked for a few minutes at the side of the road and stuck the antenna out of the car window. Wow! Instantly up came my test card P umpteen beautifully stable and as good as I get around the shack! A later check showed my stop being at 3.5 miles and 3 metres below sea level! I must explain that although the Fens are flat, antennas should still be as high as possible especially at microwave frequencies as the most unexpected things can block a signal not necessarily seen in line of sight! One other problem on the Fens is that people are very suspicious of strange vehicles parked up anywhere as the level of crime is surprisingly high.

Here is a screen grab of my received signal using the NCH software and a photo of the identical antennas used at both ends. 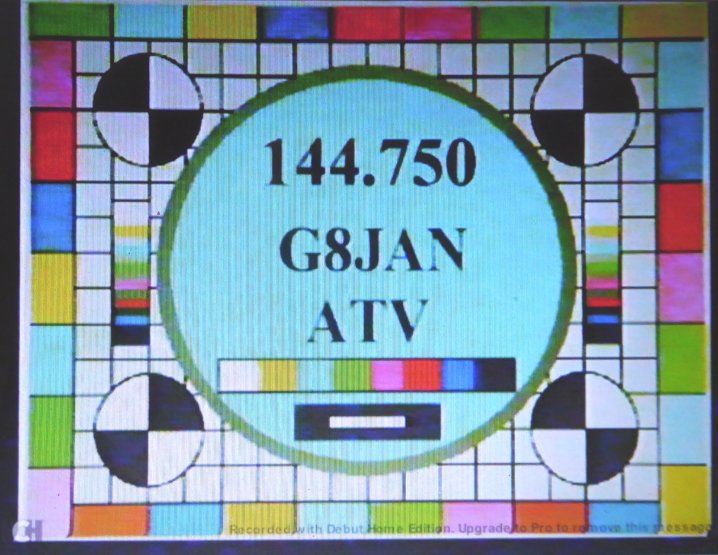 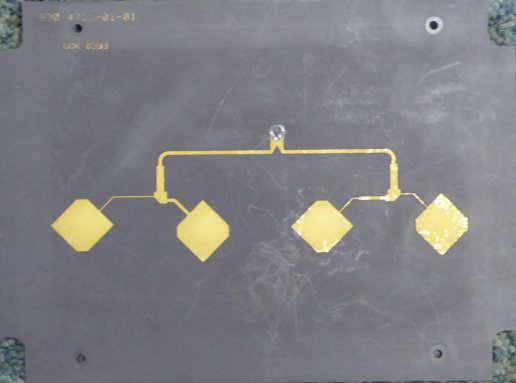 I have ordered some gear from the listing above.
If I use the gear that is also sold to fpv users at the local airfield for their RC aircraft and I am running under my ham license at 5.6 ghz what happens if they use the same frequency
Top

I can only comment on the situation in the UK.

According to IR2030-27 (OFCOM document), the licence exempt allocation for non broadcast video links is 5725–5875MHz
As the chosen centra of activity for UK AR useage is 5665MHz, there should not be an issue.
If there is a frequency clash, then the FPV boys could be educated on what they can and can't use. I suspect many of them just buy the units and use them on whatever default channeling they power up on. Only changing them if they clash with another flyer on the field.
Also FPV are only permitted 25mW eirp. And it's probable that they are exceeding this. Probably due to ignorance of bandplanning or other users.
Top

The SRD (Short Range Devices) or unlicensed band which the FPVs operate on is at 5.8GHz. See this very long chart on the Ofcom website: http://static.ofcom.org.uk/static/spectrum/fat.html

As you will know from reading your amateur license, the amateur band for 6cms is fragmented but has an allocation centered around 5665MHz. See the wiki page https://wiki.batc.tv/File:Bandplan.JPG or the RSGB website https://thersgb.org/services/bandplans/#26

So if you operate on 5665MHz (where you are allowed to run 400 watts at the antennae but NOT aeronautical mobile) you should not suffer any interference to or from FPVs unless they are operating illegally.