I'm wondering if anyone could shed some light on this nice piece of kit, bought 'surplus' as potentially a 15 watt O/P on stated frequencies. I've had the lid off and there is a string of 5 devices inside with the final PA being one of those 'Frequency stated/matched' devices according to the Toshiba data sheet. I'm hoping it will still have some gain at 5.665 GHz. My only way of measuring its actial O/P will be looking at the increase in spectrum size via a Pluto running SATSAGEN software and sniffing some output near the dummy load or antenna - I bought one of the Grid/Mesh units that BATC were selling at the mini-convention last November.
Drive will be a Pluto via DVBExpress. Rx will be another Pluto running on DVBS2GUI. So far so good.
But what sort of signal/voltage might have been used on the 'gain adjust' input? 0-5 volts, or perhaps a PWM (unlikely??). Don't want to cause harm to what could be a great piece of kit, but not surprisingly, Google did not find any user manual for the product....

TIA - all suggestions welcome (other than 'sell it to me'!!)

I run a similar model which produces 9Watts with the circulator removed and just over 8Watts with it fitted. No mods were done to increase power. Very nice piece of kit, I know one other BATC member runs one and gets slightly better results.

Drive is about 0dBm. 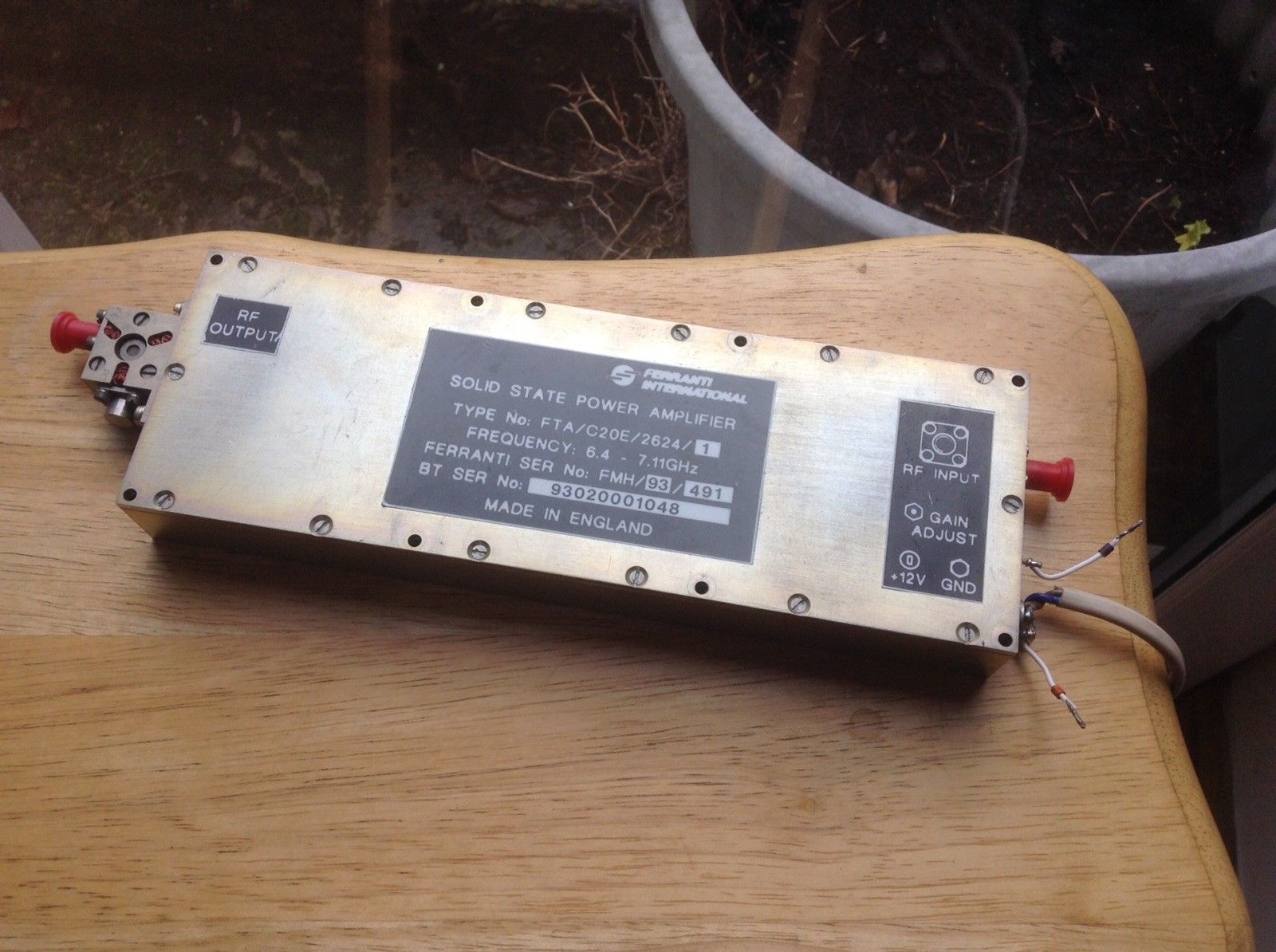 What should I do with the Drive input though? Leave disconnected if it then defaults to maximum gain?
Just got 5.665 working across the shack (DVBSGUI not yet extended for the Pluto up to 6GHz) but SDRAngel does now do DVBS2 and that is working great at 333kS with audio too.
I assumed the circulator might be frequency dependant but its presence (I assume) helps protect the final device?
Is it safe on 13.8V or a definetely 12V only device?
Gareth
Top

Well done Gareth - that's the amp that most of us use!

Pluto driving it should be fine but you need to loose a bit of power if driving with an FPV unit as it only needs 1 milliwatts. 13volts is fine, although they do get hot as they draw ~8 amps and mine runs ~10 watts. Put a pot between 12v and gnd and take the center to the gain control - start at the gnd end and wind it up for max output - not smoke!

Hope to work you over the weekend - there should be 4 of us on 5.7Ghz DATV.

Great, Thanks Noel. It should be possible with the gain and power available. Can't persuade my old Win7 Laptop to run SDRAngel properly at the moment but hope Marcel updates DVBSGUI to extend the Pluto tuning as that does run OK on it.
I've some -10dB pads (for using a Pluto with SATSAGEN) that will help with drive curtailment and of course ExpressDVB has a drive power slider.
Good stuff

I have a couple of PAs similar to the one shown and have recently run some tests. I say similar because the type number and frequency range on the label are different. I also have the original power supplies that came with the PAs and on my units the original gain control is achieved using a 100kOhm variable resistance to chassis, with maximum gain = 100kOhms, minimum gain = zero Ohms.

As far as I am aware, the PA has not been modified, with the insides looking quite clean.

Irrespective of the label, the PA seems happy at 5762.5MHz. Regarding the o/p circulator, I would leave it there as it's protecting the PA and the improvement in o/p power in removing it may only be a fraction of a dB.

You can see a few photos below. 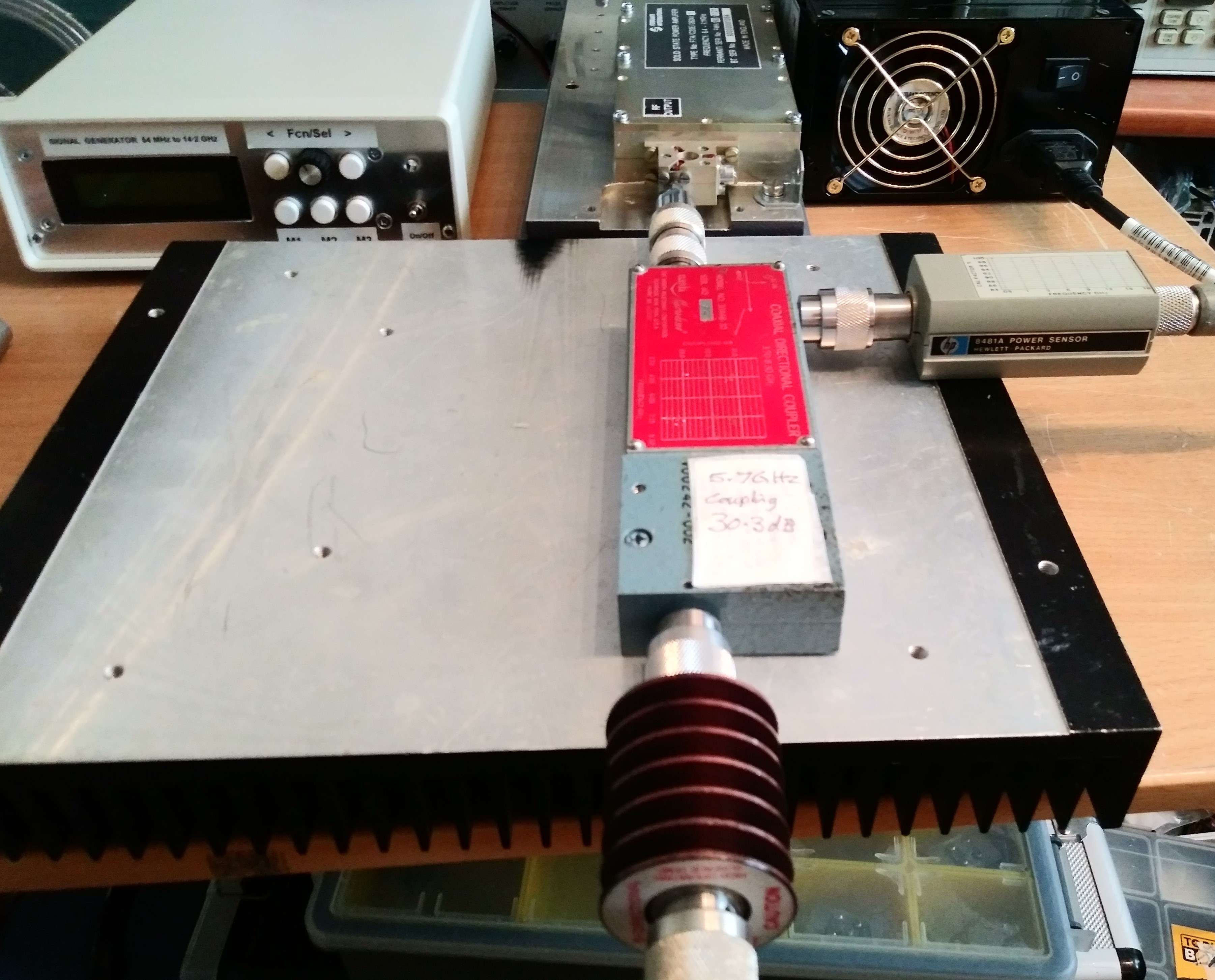 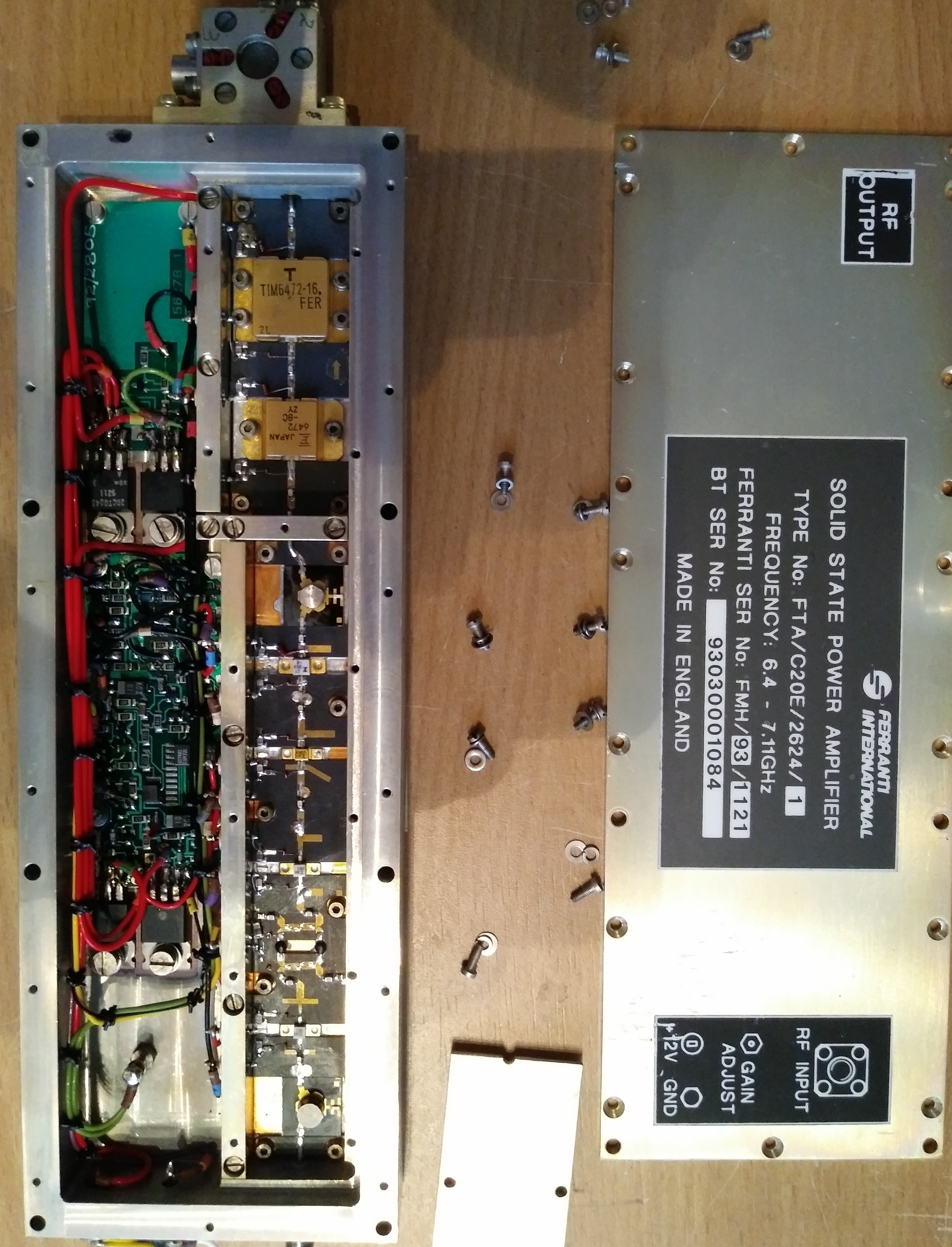 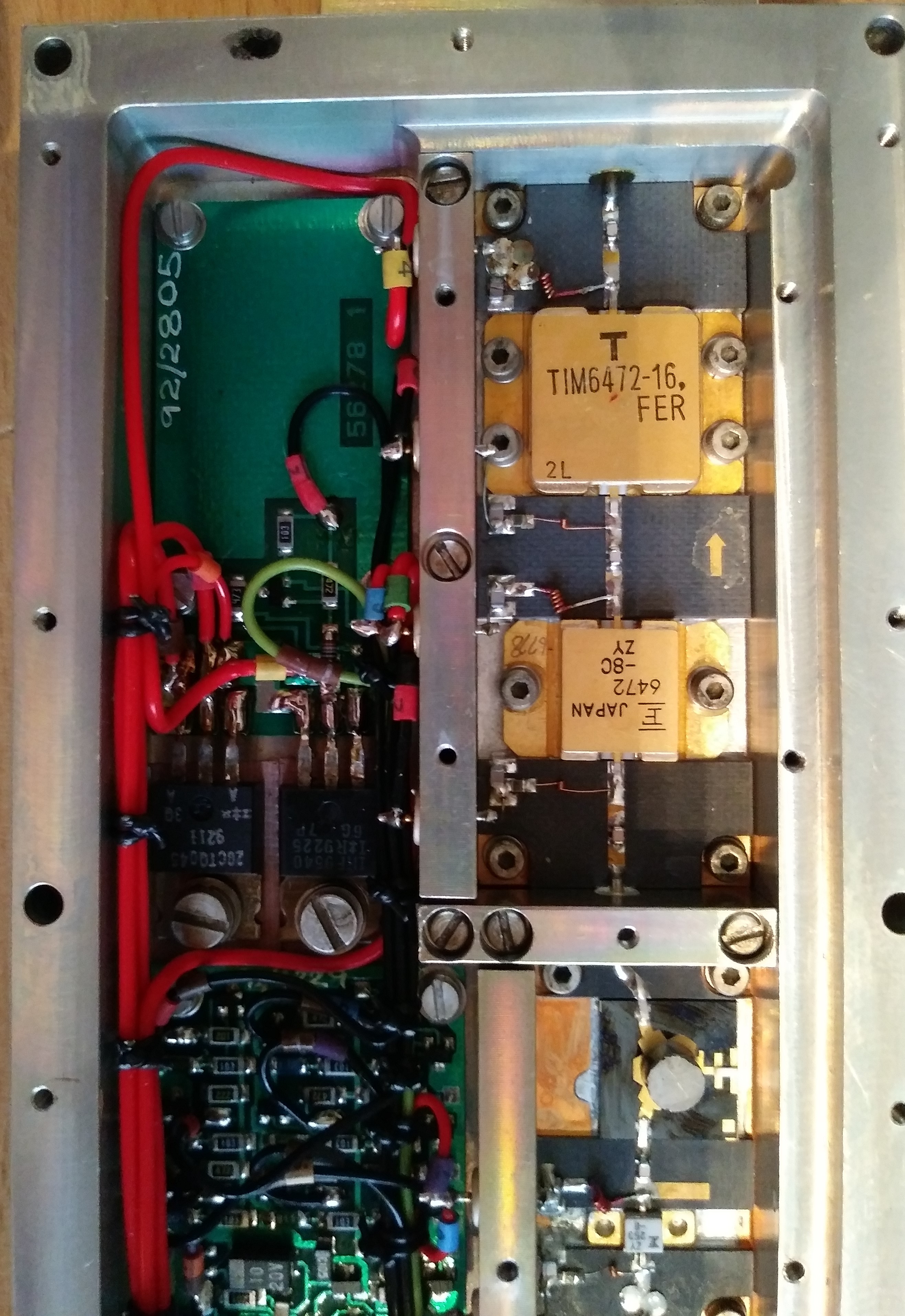 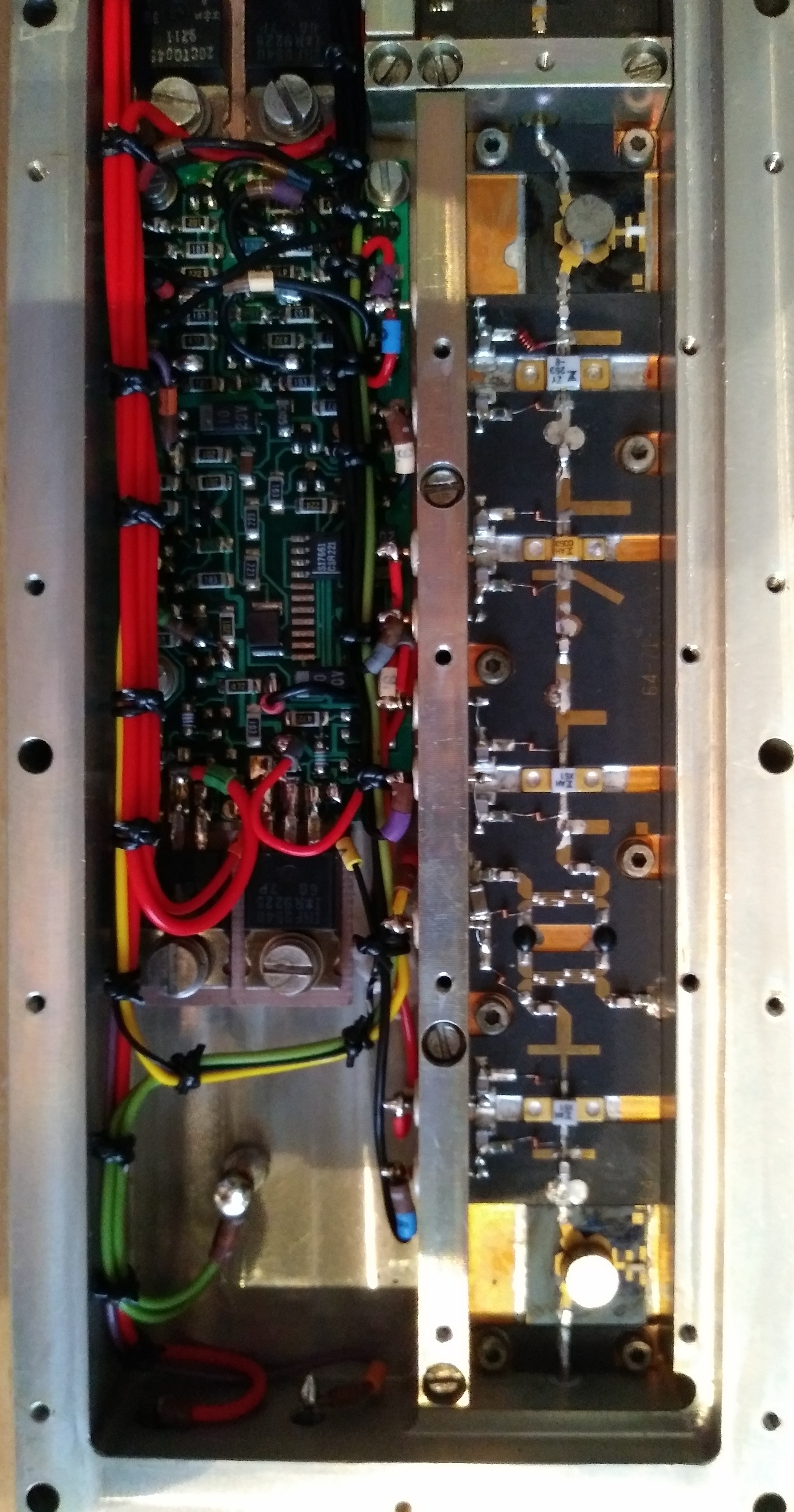 Very helpful Jen, I'm just adding some PC CPU heatsinks to mine. The gain control pin (when floating) has 7.97V on it. I assume that this is internally sourced in some way and reducing it progressively to ground potential controls the gain. I'll change mine to a 100k and see.
Gareth
Top

And it works.....across the shack. Gain control (100k to deck) seems quite smooth in adjusting 'received signal strength' although the voltage change per degree rotation isn't very linear.
Needed the second heatsink, it was getting just a bit too hot without it.
Now to arrange tripod fitments etc, or maybe remove my FM-Drone gear from the pair of flat-plates I have already on a mount. That would simplify RX/TX switching.
Doesn't seem to need much drive from the pluto, but no real way of measuring output power at these frequencies ATM. 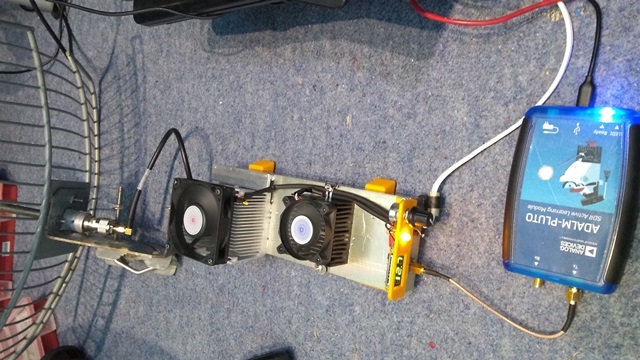