After finding my Stealth Amp has possibly a mid-train device failure (N5, a bit odd but there's a lot less coming out than is going in!) I reached into the 'stores' and pulled out a Spectrain driver board. According to PyroJoe who sells these 10mW should see full output.
Using either my Pluto or Lime and 'various eBay' amps I can get as far as 0dbM which when fed to the SPectrian gives +30dBm as expected so the amp itself seems fine, I just need more drive.

Hi Jonny, well I have a selection of things, some of them traceable to known devices and some not. Here is what I've found:
Search eBay for this "2MHz-700MHZ RF Amplifier Power Broadband For HF VHF UHF FM Transmitter Radio". For about £7.50 its got loads of gain up to 70cms then tails off but ideal for adding some poke to a Pluto either DATV or NB. I let the smoke out of mine when I was driving my Chinese MRF186 amp, mind you it went portsdown - amp - PA and hit 100+ watts....... briefly. Suspect the unshielded amp got back into everything at this level and sent it on its way. Too much gain for DATV on my amp anyway. It gets far too hot too but as far as I can tell that's mostly the regulator overhead burning off. Probably worth running it directly from 5 volts and bypassing the regulator altogether, then it might stay cool enough.
Next up are these "Low Noise LNA 0.05-4G NF=0.6dB RF amplifier FM HF VHF / UHF Ham Radio HighQ" or similar, they have got a bit more expensive recently but work well and have a named device SPF5189. I use these between Portsdown and various externals up to 13cm. I have one dead one, not sure what killed it but its on a nice board with SMA in and out and easy to replace with an active device, ones like are used in the Portsdown chain.
What works best for me is a nameless device that has clearly been re-worked on someone else's board and stuck in a small alloy box. This works best on 8.6 volts (gets hot above so suspect needless overhead again) up to and including 70cm and delivers clean power and decent gain. It wasn't so cheap but someone was using one at CAT18 and it worked well. Still listed, https://www.ebay.co.uk/itm/50-1200MHz-1 ... SwMmlbazre
Lastly I'm waiting on this from China https://www.ebay.co.uk/itm/TQP3M9009-50 ... 2749.l2649 once again a NAMED device with a great spec. Yet to arrive and be tested though.....
Hope that helps, I think they are ALL by-products of the cellular industry (?MODAMPS?) but cheap and ready built with SMA. Take the specs in the adverts with a pinch of salt and test for yourself. I'm still trying to convince myself which part is dead (or not) in the Stealth and how to bypass it without killing anything else. The drive seems to leak around devices making accurate measuring a bit tricky especiually as each stage seems to have attenuation after each amp.
Onward!
Gareth
Top

Update: The latest eBay amp arrived and its not really any different from the SBB5089 (not 5189 as I typo'ed earlier). These work well with pluto and Lime up to and including 13cms. I can't see higher than 2.7GHz on my analyser.
They are very cheap too https://www.ebay.co.uk/itm/10pcs-SBB-50 ... 2749.l2649 and I have replaced dead units on one of the small black "Low Noise LNA 0.05-4G NF=0.6dB RF amplifier FM HF VHF / UHF Ham Radio HighQ" that had previously expired. Shame the little amp boards have gone up in price, but still not unreasonable with SMA in and out.
Still trying to get more drive for both the Spectrain (I can muster 5 watts now) or my REMEC which scrapes up to 10 watts on carrier only.
More research needed....
Gareth
Top

I would have thought the Spectrian would be OK. I managed to get full output from mine with Pluto. However, this worked at the end of a long 20m coax run to boost the level back up to fully drive my amplifier, which also needs about 10 dBm.

Thanks Mike, I've left the Spectrian for today and gone back to fault-finding my Stealth unit. Using a tiny two turn pick-up coil on the end of some coax to my Spectrum analyser, I sent drive in and followed it through. Seems both the pre-driver amps are DEAD so I removed the DC feed to the second unit and fed RF direct in there from my Pluto. Bingo, its working. I added one of the 5089 amp boards inline and hit 25 watts out, nice and clean too after the filter.
But it was cheap to start with...... Be easy enough to either replace each small amp (there seems to be some filtering and attenuation involved, repeatedly) or bypass the lot and use as-is with my little amp fitted inside somewhere handy.
Original Input bottom left hand side, new input red coax. 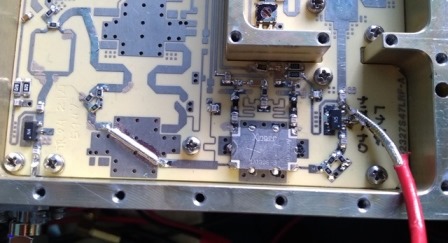 Well I think I have solved it

The phrase 'the best laid plans oft go astray'......I noticed some instability at higher power levels and thinking on it overnight I wondered if the new supply lines needed decoupling at the regulator end. So a couple fo 330pF were soldered in at the regulator outputs to gnd. That worked, it seems happy to be driven by the pluto flat out and shows 45dBm on my analyser.....moving on, I decided to test a 2M linear I have had for many years in anticipation of actually using it. Wired it all up, driven by my FT817. Its an old BNOS 10-180 so 10 watts of drive for full output.
Cautiously driving it with 2.5 watts shows a surprising 50dBm (100watts??). That seems a bit suspicious so I measured the drive level. on the 2.5 setting it was showing over 5 watts and on the 5 watt setting it was showing a totally unbelievable 6.9 watts. All on its internal batteries.....yeah, right.
So I thought I'd measure the input DC resistance on the port labelled '50 watts max'. Its shows (DC test meter) 41 ohms...... oh.


Now I haven't got anything (except this amp today) that will deliver over 30 watts, never mind 50....so....is my testers dummy load cooked? It was bought as in GWO but uncalibrated. Its a Rohde & Schwarz CRTU-RU - cell phone base station testing unit but with SA, RF Power and sig gen functions, 10MHz-2.7GHz).
What other means can I reliably measure microwave RF power? Ideally something I can at least in part build......and which can soak up 100 watts or more....
Gareth
Top
Post Reply
10 posts • Page 1 of 1