ADALM PLUTO and a roving camera

ADALM PLUTO and a roving camera

I've had a couple of Plutos since they were freely available. One has been recently reflashed with the DATV software https://wiki.batc.org.uk/Custom_DATV_Fi ... _the_Pluto which I tried and was amazed to see it working, using Larix Broadcaster on my phone through the home wifi as a 'roaming' cordless camera.
Like I do, I got to thinking how I could achieve this whilst portable (limited propagation potential from my home location). So I dug out an old 4-port router with Wifi (Add-NWR9500) and hooked it all up to that. This worked well UNTIL I unplugged the internet link from my shack router at which point the ADD-NWR dropped my phone off the wifi.
A friend in my local club (Pat, G4FDN) who is a whizz with networking stuff suggested that I try one of his mini-wifi boxes, in particular he lent me a GL-inet GL-MT300N-V2.
Hooking it all up and bingo, it streams from my phone to the pluto and weighs next to nothing.
Seems a shame I can't config something inside the ADD-NWR to ignore loss/lack of internet but I wouldn't know what to look for - any experts out there?
It's fine once hooked up and working, but seems to need a reboot (Pluto and/or router) now and again if the phone drops off, like when I wondered if it would do a 4G hotspot while streaming - it won't! 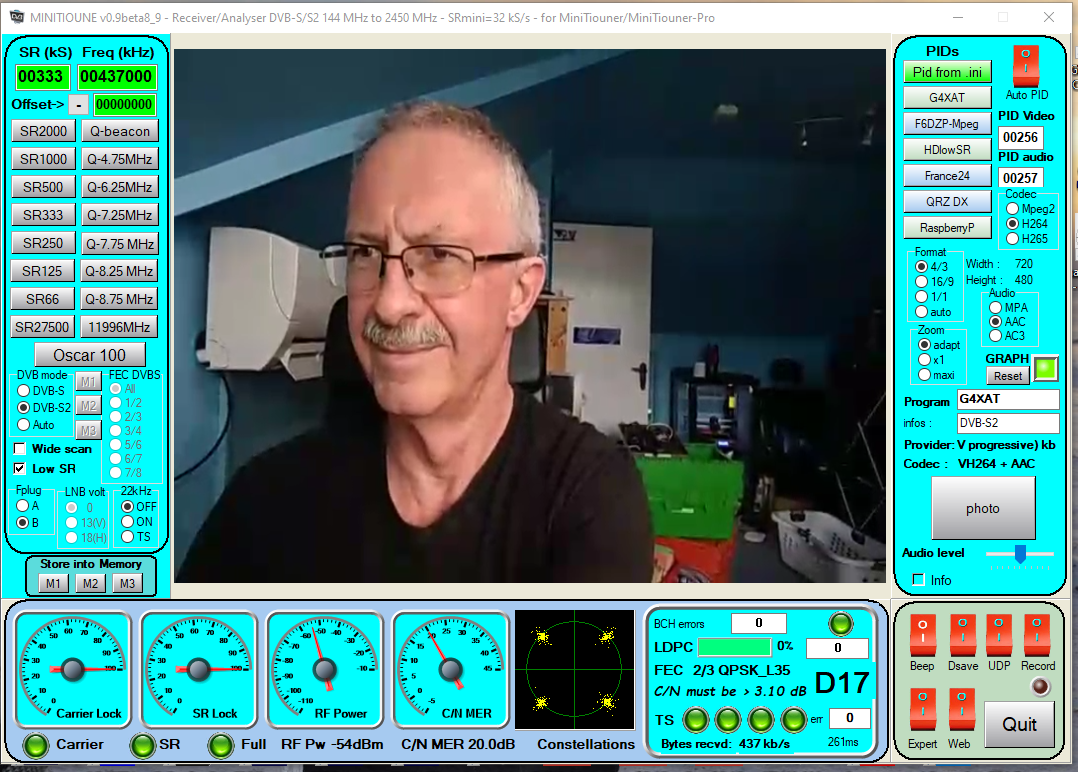 *** EDIT And it works with my old Nexus 5 too, and I can film at night as the camera light can be controlled from Larix

Been playing this morning seeing if I can get BOTH my mini-tablet PC running OBS AND my phone running Larix to stream via the wonderful little GL-iNET router. It does, so I can select three sources from my PC (F&R camera) or C920 webcam for transmission and (not at the same time) use my phone as an easy roaming cameras, also with a F&R camera.
I guess just don't use 13cm at the same time will be the key!

.
Can you receive using the Pluto ?

Hi Dave, Only tried DVB-S at the moment via SDRAngel as a separate stand-alone system as SDRAngel would expect the Pluto to be plugged into a USB port on the host computer. Not sure if SDRAngel could support a data stream via the network (like SDR# does via RTL/TCP) at which point I'm close to being out of my depth! It seems to offer a 'remote imput' but the relative lack of documentation on SDRA makes it 'guesswork'. I'd have Minitiouner for my RX generally but the concept of a one-box solution does sound nice. In the hands of the clever software writers I guess.....

SDR Console supports the Pluto via an IP address. I would think most software does as the Pluto plugged in as USB appears as a network connection to the OS. That's all handled by the USB driver.

For what it is worth, I can stream a DATV transport stream via UDP from OBS to the Pluto via the network and using Evariste's excellent firmware. This can be modulated and sent as DATV from the Pluto. It can be MPEG2, H264, H265 and works at symbol rate from 33ks to over 1 MS.

Receiving I have not tried yet but the Pluto can certainly run Leandvb. However it can also stream the IQ data which can then be demodulated on a PC or, I suppose transponded to a minitiouner.

I was offered a 'surplus' Talk-talk ADSL wifi router with two LAN sockets yesterday. I can confirm that it keeps wifi alive without internet and with two LAN ports can support both my Pluto and laptop when out in the field, plus the phone as a roving camera.
I'd guess most of these will end up in the electrical skip as better broadband (fibre) rolls out.......as and when

Actual model number is DSL-3680. It even got a wifi on/off button, along with a WPS button and ON/OFF.
Not bad for free.....
Gareth
Top

UPDATE - don't throw away that old Plusnet router either, that works fine with no internet too model number Sagecom Router 2704N PLUSNET. So I now have a 4 port switch plus wi-fi. Somehow think that will be enough whilst out in the field.....
Top
Post Reply
7 posts • Page 1 of 1