Excellent news on the Portsdown. Absolutely no pressure from me - it'll be ready when it's ready

Just been ordering some parts from Digikey using the BOM spreadsheet and noticed the BOM has incorrect working voltages shown for some of the electrolytics.

eg one is shown as 6V DC in the BOM but digikey part # shows it as 25V. Not a big deal and probably a typo / cut an paste .
Top

Those settings work much better thanks Dave, although I still can't persuade it into 333kS. The audio is about a second delayed and, after an hour or so soak-testing, the audio delay goes up to around 10 seconds. The picture, at 500kS, is very solid.

G4WIM wrote: ↑
Thu Jan 14, 2021 11:26 am
Just been ordering some parts from Digikey using the BOM spreadsheet and noticed the BOM has incorrect working voltages shown for some of the electrolytics.

No - its not a typo. 6V is the minimum but the best available Digikey part when I made the BOM was 25V. 25V is larger than 6V to that's fine. There are many cases where a component exceeding the minimum specification can be used and I went for the least costly, in stock parts where I could. It's not incorrect and it's not a mistake to substitute as long as it meets the spec. I think the cheapest 22uF were 50V and the 470uF 16V.

However prices change as do stock levels. This is not a high spec project with demanding component choices so substitute as appropriate. It is a filter cap and really doesn't matter very much if it's 330uF or 470uF. I tend to use what I have if I have something close enough, it's a lot cheaper, especially when things are only available in multiples or for a much better price for 10 off.
Top

What Firmware version should I have in my Pluto - I'm using a 'for the brave' from a few months ago....do I need to upgrade?
Using the same settings and camera as outlined above by Dave. Getting RF which I can see on my SDR but it has dropouts which are clearly upsetting the tuner - occasional locks and data shown but no picture yet....

Yay, sound and picture on 333ks

No dropouts in the carrier stream too

Been called for cooking duties though now.....

Across the shack continued today, can do 500kS & 1MS across the shack on 437. It looks (on the SA) like 71 & 146.5 should work - its definitely transmitting 'something' but so far no decode. (Pluto as TX).
I have modified my CAD and .stl for the 3-D printed end-plate with sunken (in the photo) lettering for the feature labels. I think I will re-print with raised as I did on my MT, its a cleaner look. To centralise the F connectors I have assumed the PCB is mounted in the SECOND row up. I added a power switch (6mm toggle) and a Panel mount LED (7.8mm) for extra ease of operation. To ensure full 'power-off' I cut the track between the power + and fuse input and wired it via the toggle switch. To keep RF in/out I covered the back with self adhesive copper foil then cut out the required holes with a scalpel.
If anyone wants the .stl, send me a PM. It won't have 'by G4XAT' on it. I printed it with text uppermost, 0.15 layer height, 15% infill. It will save you filing ......
Testing just now on 146.5 and 71MHz - with the tiny black Pluto aerial I can get copy on Knucker but it has to be VERY close to the knucker for lock and decode. Suspect its a bit deaf down this end of the spectrum. Yes I know the Pluto rubber duck is not resonant 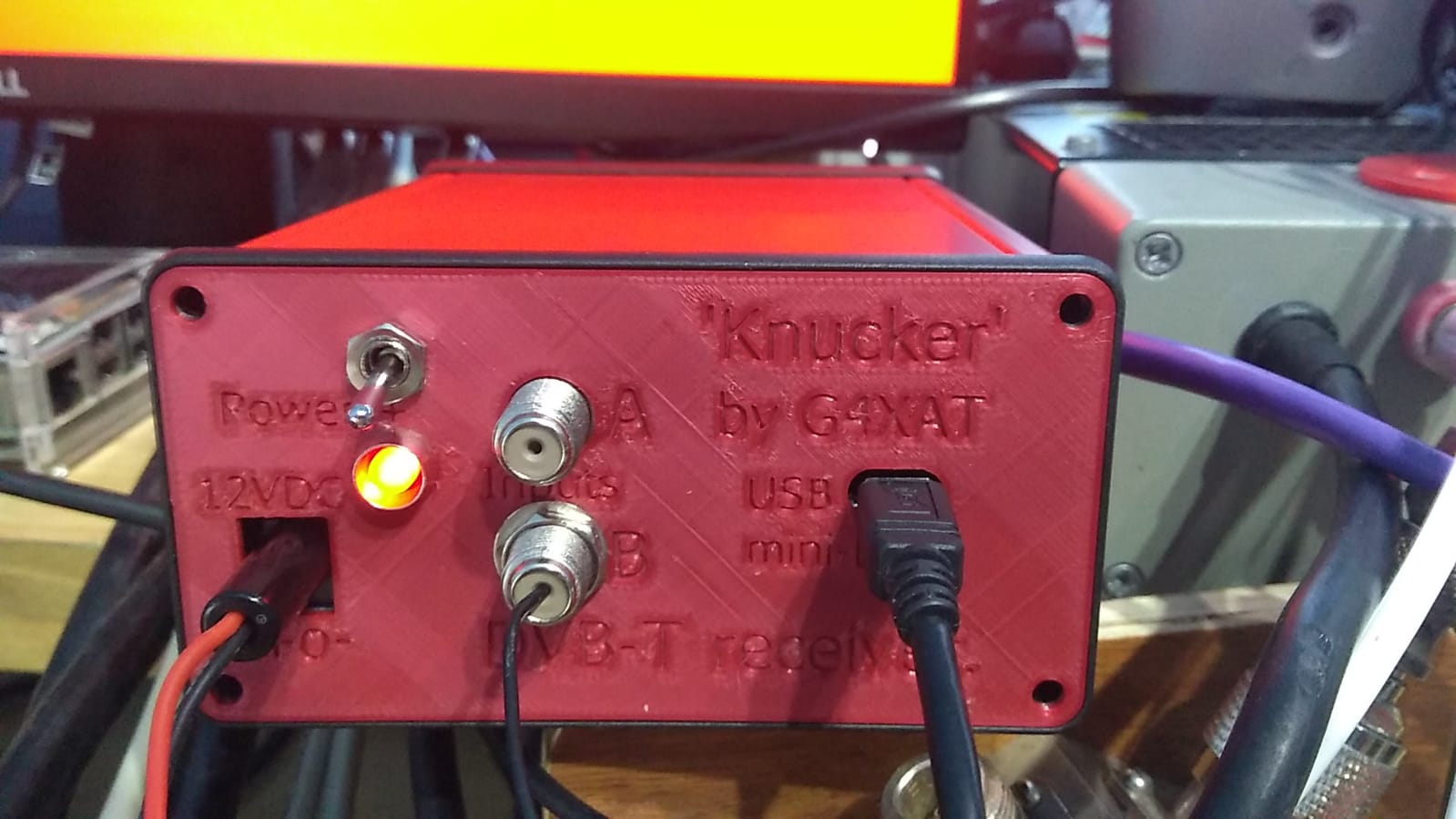 Good to see - the dimensions might be useful to those making their own panels.

Drawing dimensions if it saves anyone working it out.
Mount PCB on second 'shelf' up in the Hammond box.
Gareth 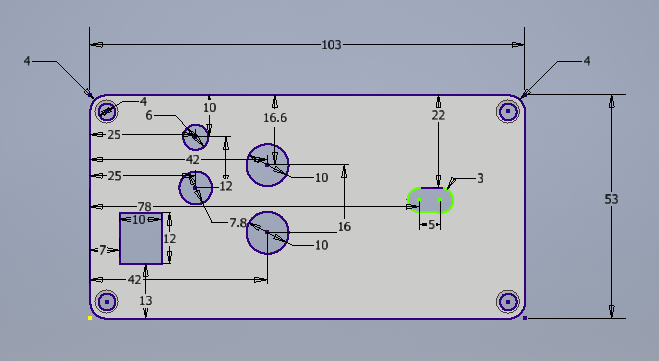