Yesterday I wanted to gave up. Today morning I gave it another try, put the metal covers back on the NIM after bending those little lugs on the backside cover. And.....

@G8GKQ Dave, the FAQ entry can be deleted. All works as expected, it was a specific problem of my NIM...

Thanks for your patience and help

Edit: The whole thing seems to be a problem which has to do with GND. And another effect: as soon as I connect the Digole TFT, the init of the LNAs fails. Maybe the GND is bouncing, will try another cable...
Last edited by dl9sec on Fri Dec 25, 2020 6:42 pm, edited 1 time in total.
Top

Hi Thorsten. Thanks for letting us know; really good to hear that it is working!

since the last development update I have a strange behaviour of the Ryde receiver.
When I start the whole system from a cold boot (except the MTPro v2, it is powered by another source) or a warm boot (sudo reboot on ssh console), Ryde starts and shows the "Longmynd not loaded" screen, but my RX led goes on,sometimes not and I can hear the audio of the QO-100 beacon: 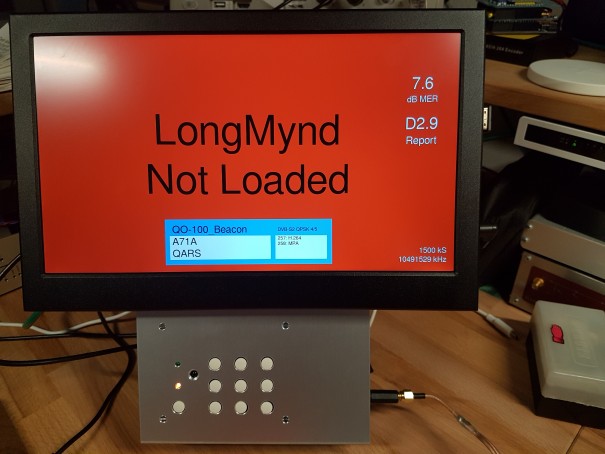 In this case the keypad seems to be unresponsive for most of the buttons (only SELECT, BACK and OSD seems to work).

As soon as I start the receiver from the "menu" on the SSH console all works very well and the keypad is full responsive.
Maybe some differences in init on startup and via the console menu?
I already did a complete deletion of the Ryde stuff and a new install from the "install_ryde.sh" script.

as you told me via QO-100, I checked cable and monitor. It was indeed a bad quality HDMI cable which seems to make the parameter detection of the monitor unstable and caused that strange behaviour of the Ryde receiver. I changed the cable and it seems to work well again.

Thanks for the hint.