Forum for discussion about the Langstone Microwave Transceiver that shares some features with the Portsdown. Wiki: https://wiki.microwavers.org.uk/Langstone_Project
Post Reply
16 posts

I will order one and do some tests. They are a lot cheaper and more portable so if they can be used without any additional development overhead it is worth checking.

The screen arrived, it works but only after a config change as explained earlier. I wanted a mount for it and finding nothing suitable online I have done a 3D printed model here - https://www.thingiverse.com/thing:5019838 I don't have capacity to make these so please don't ask. 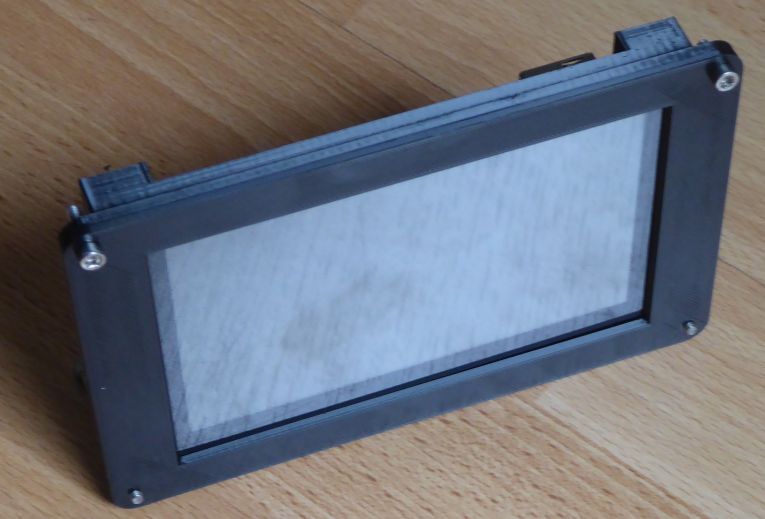 As the DFR0550 display seems to work OK without any extra development input I have added it to the Langstone WIKI as a suitable alternative display.
The only significant difference appears to be that the 'lcd_rotate=2' line in /boot/config.txt does not rotate the display but does rotate the touchscreen!

The standard Langstone install script adds the 'lcd_rotate=2' line by default. I have created an alternative install script for the DFR0550 that does not do this so if you are installing Langstone for this display please use the install_dfr0550.sh script.

I used this display from aliexpress. Drivers like DFrobot 5"

Had one of the DFRobot 5" LCD's on my Portsdown 2020 for about 3 months now. There were three issues with mine so I searched the DFRobot Wiki and found they are common problems.

First I noticed was the screen momentarily going to black, this sometimes settles down. Then after boot up the screen is non responsive to touch and needs multiple prods to get it going, again this settles down. Also on the Wiki many are saying WiFi doesn't work when the RPi is fixed to the back of the display. My display is mounted away from the RPi on a 20cm ribbon so I guessed it would be OK, tested it this afternoon and no WiFi. Not a problem as I use a cable connection.

Some users seem to be saying that the interface is not wholly compatible with that of the Raspberry Pi, I'm not clever enough to give an opinion on that. What I did do was try a suggestion to fix the screen issues, it was to add a line to config.txt as follows.
"lcd_framerate=53". In the last couple of hours I have rebooted the Pi many times and I no longer have issues with the screen going blank or the lack of touch response. There were no remedies for the Wifi issue.

That is my personal experience, Arthur G4CPE has the same display on his Portsdown but it doesn't go to black, he did say the touch screen sometimes needed several prods to get a response.
Find me on D Star through GB7BP
Top
Post Reply
16 posts