Thanks for the amazing, inspiring day yesterday. A real credit to all those involved with its organisation. 73s John G8IKP
John G G8IKP
Top

The presentation slides from CAT 19 South have now been published on the BATC Wiki: https://wiki.batc.org.uk/CAT_19_South

Based entirely on an idea I saw at this event, (John G7JTT had one on show) I picked up a Dell laptop screen for free from a local advert. A recommended supplier https://rover.ebay.com/rover/0/0/0?mpre ... 3614348146 delivered a new driver board for £20 and a few minutes saw it connected up and working on my Linx Windows tablet (duplicates the screen), my laptop on D-plug lead (as a second monitor screen) and my spare Portsdown RPi (pictured). I found if I connected the big screen power AFTER the RPi has booted, both gave full screens but if the RPI booted with the HDMI screen powered, the HDMI became 2/3 full size (RPi screen stayed full size on the RPi).
Given that my local PC shop told me that they 'chuck out' dead laptops every couple of months I think it's worth pursuing again. This is, I guess, an early 2000's screen, later driver boards may be able to support composite video in too as did Johns example.

All good stuff and 12v DC or less too 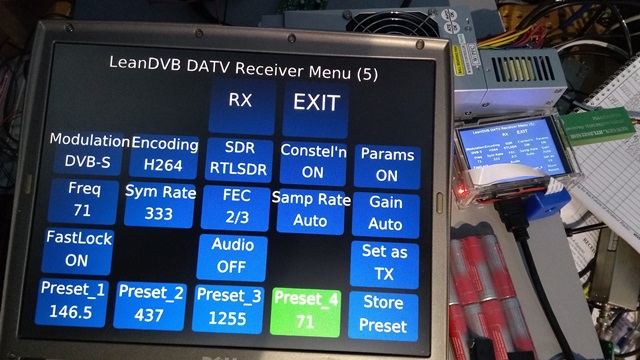