I built a V2 MiniTiouner a couple of days ago and noticed there was no +12V on the 'A' Ftype.

Not a problem - I used the 'B' one instead. This was fine for a couple of days till this morning when I switched on and noticed the PSU current dropping from 240mA down to about 120mA

I moved the LNB feed to my NB receiver setup and there were no issues and the LNB drawing was drawing about 100mA.

I've opened the serit and found what I presume to be the two tiny inductors that feed the +V to the Ftypes - on one end there was 12V and nothing on the other. There were splashes of solder/metal in there though

So in short does anyone know what the value of this inductor might be?

Hi Richard,
I believe that quite a few have had this problem, me included. What I have done, others too I understand, is fit a through hole inductor and polyfuse inside the Serit NIM. I fitted a 10uH inductor and 300mA polyfuse in series between the centre pin of the F socket and theLNB voltage input pin of the NIM with the inductor as close as possible to the F socket. I don't know the original inductor specs but as 10uH has an impedance of around 50K ohms at the frequencies we're using I went with that.
There is this thread showing a fix, this OM has used a hairpin inductor rather than a through hole one as I did but you'll get the idea.
viewtopic.php?f=105&t=5942&hilit=lnb+voltage&start=10
73 Dave.
Last edited by M5TXJ on Sat Jun 22, 2019 3:38 pm, edited 1 time in total.
Top

Me again, I should add that using a 10uH inductor means its impedance at 146.5MHz is approaching 10K so can be used to feed a 2m masthead preamp as well as an LNB.
73 Dave.
Top

Thanks - that is brilliant. The parts only arrived for it on Wed morning and I built it in the evening - like any new toy I want it to be perfect and to have one socket DOA and the second dying after a days use was a bit upsetting.

time for a quick RS order then
Top

An alternative which is easier to replace in the confined space is a standard ferrite bead with a couple of turns of wire.

This is the mod to my Serit, I have since changed the 1uH for a 10uH for better performance at 146.5MHz as in my earlier post.
73 Dave. 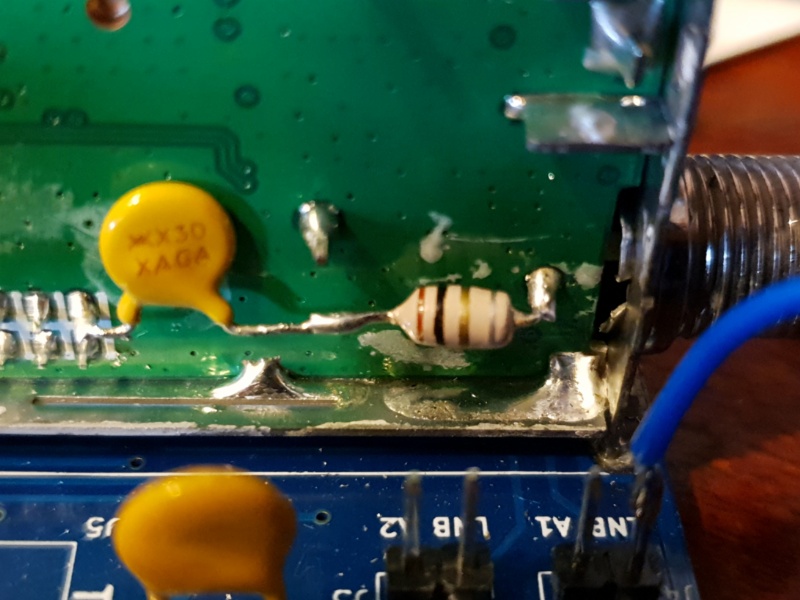 Thanks for that Dave, just did as you pictured there after losing voltage on that socket and it's working fine now.
Top

just asking if you can provide more info about the 10uH inductance.

I tried to find RFC (Choke) in Digikey but no workable results.
Then I tried only Inductance and found something like M10135-ND

My question now, to decide what to buy, is how have to be the Auto-resonance Frequency or any other HF critical parameters?

Hi Luca,
the choke isn't critical, I just used one from a typical Chinese sellers 0307 size selection I bought from Ebay, something like this.

Can we add the picture of your mod to this wiki page: https://wiki.batc.org.uk/Serit_LNB_DC_supply