I have just done a new build from scratch and it seems to work. Please could you check the exact voltage between pins 4 and 6 of your RPi 4, and also provide a photo of the info page (from Menu 2). Any other clues as to how you have your equipent set up would also be helpful.

Will do Dave - I'm just re-building from scratch again

I'll report back when it's done.

This time I disconnected all the GPIO and sound card and did the install with only the 7" screen and PiCam plugged up. The PD4 install completed ok. I then shut it down and reconnected all the GPIO, sound card and Lime Mini (and not the Pluto). As yet I haven't installed Langstone on this third attempt but doing so made no difference on the second attempt and adding your fix to the second attempt made no difference either. I didn't connect a mouse or my Arduino pseudo-mouse hardware.

When switched to TX the PTT fires but the monitor picture is still freezing and there's no RF from the Lime Mini.

The equipment is all powered from the 'official' Pi PSU. Soundcard is the white one recommended by Colin for the Langstone. The Lime is plugged, via a short USB3 extension, into one of the Pi's USB3 sockets. I don't use a powered hub. The SD card is a 32GB Kingston and is the same type as the one with the build which works (Raspian with A27).

Picture below as requested.

Let me know if there's any further info or tests you might think would be relevant. Thanks very much for taking an interest too. 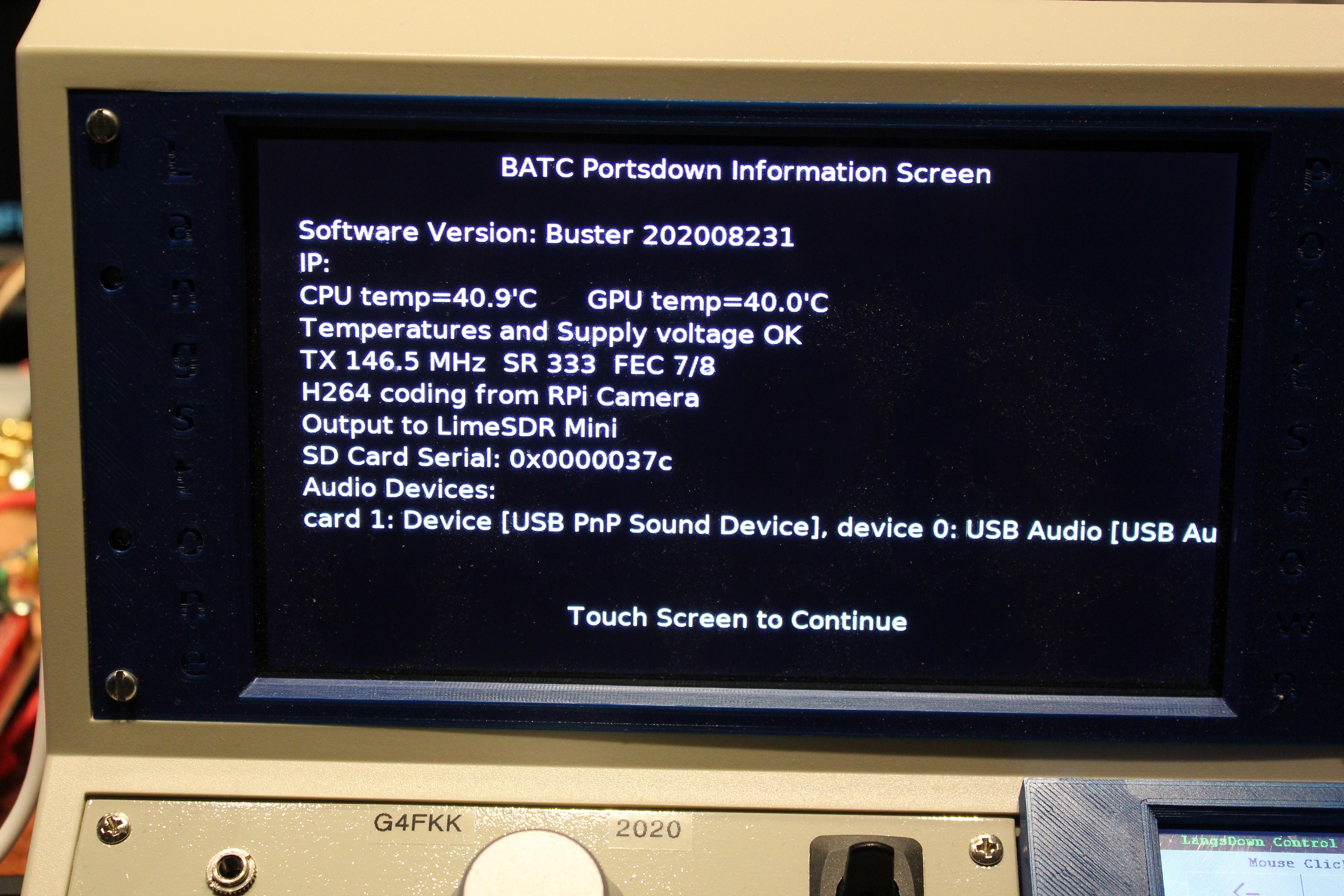 Please check that you get good Pi Camera images when you select Menu2, Pi Cam Monitor.

What happens when you try to transmit the Test Card?

Not sure why, but also please try when connected to a network. You were not connected in the photo.

PS: Running the LimeSDR Mini Test Report always fails (TX_2 -> LNA_W Test), the first time I try it and then seems always to pass all the tests on subsequent attempts.
Top

I get a good picture on the Menu 2 Pi Cam Monitor.

When I tx the Test Card I still get no RF from the Lime Mini. It's hard to tell if it freezes

The same happens if I try to TX the PiScreen.
Top

Your last question may be a clue!

I've disconnected the network and the info is now reporting "IP: Not connected" instead of just a blank. I'm doing a power off/on reboot between these tests.

I have just followed the instructions and got my Portsdown 4 working. I have a Lime mini, Pluto and Minitioune all connected for RX and TX along with a usb audio dongle, usb video in dongle and Pi cam. The only thing that did not go as smoothly as possible was the SSH to the RPi where I had to summon up the control console with " /home/pi/rpidatv/scripts/menu.sh menu " and setting the wifi was just a little tricky. I had to invert the video screen but that was just a button.
I have used it to RX Oscar 100 and position the dish. Very nice! (did n't need my glasses to see the read out!)
I have TXed DATV testcard and Pi cam. That is when I found I had to go to SSH and get the control console to set my callsign and location - unless I missed some button on a screen.
The software has come a long way. Well done to you and everyone else who have helped.
Now I will need a bigger case for all the extra bits!

I have been a victim of my own success and published software before writing the CQ-TV article or the Wiki entry.

You can bring up the ssh console menu by simply typing the alias "menu". My aim is that all the fuunctions on it should also be available on the touchscreen. Wifi is one that I have not yet implemented.

You can set your callsign and locator from the touchscreen Menu 3, "Set Call, Loc & PIDs". Pleased that it is all working for you.