I currently am using westflex 103 for both my narrow band 60cm G3RUH feed and wide band 1.2m uplink dishes.
Does anyone know the loss in db at 2.4ghz for westflext 103 ?
I have a SG lab 20 watt PA which is fed by a lime sdr module with the pluto amplifier.
I saw some German stations on eshail last night running 500K with nice video using 20w and a 1.2m dish. The text scrolling across the screen said 20W with 1.2M dish.
Now I can only see a a spike on the wideband transponder with 125k with 20W and just having the carrier on with no video. If I try any video I see nothing. I am using a 1.2M dish with 5 turn helix. So am I losing alot of power through 4M of westflex ?

My next plan is to try and use a 10m long buffered usb cable and put the lime sdr, pluto amp and sglab 20w at the dish. I will then run a heavy duty 4M 28V DC cable out to the dish for the 20W PA to reduce cable losses. This is assuming I can get the lime SDR working ok with the buffered USB cable.

Anyone using westflex for the uplink ?

I used to use around 5m of W103 between my 13cm transverter and antenna, without any noticeable loss. If I remember correctly, when I had it measured the total loss of 5m of cable and a pair of N-types was about 1.5dB.

If you're finding that you have big losses, I'd start by checking that the connectors are on properly, and then check the condition of the cable - if it's not new and been flexed a lot, it could have become quite lossy.
Top

Thanks for the info. I will check my cable and I think test the positioning of the helix. I couldnt find any data on the Westflex above 1GHz so glad it is not to lossy. Hopefully have some video on the satellite soon.
73s
Darren
73s
Darren G4VTQ
Top

Are you sure the Helix is the right polarisation sense? You should be doing better than that.

Hi Darren,
I would put your PA at the dish and your Lime in your shack. Put some amplifiers in you shack to feed down the cable. These small amps are cheap like the 8watt one that gets used by many with the always tx mod of two legs soldered together on one of the ICs. Even a dB loss can make a big difference.
The other thing that you don't mention is if you have looked at the transmitted signal from your lime directly as in across the shack.
I have a Lime and it works on a metre usb extention but that is only becuase it was handy to use at the time.
I have my 20watt linear and a PSU near the LNB and a Lime and a couple of small amps in a nearby shed. The Lime is driven by a windows PC running DATV Express. This takes video from vMix but vMix source is a stream from another computer in the house running vMix and using the vMix record streaming output. I can control the shed computer using remote desktop and the linear PSU is switched by a Hive remote controlled plug.
If you use a laptop running remote desktop to look at your main computer receiving Oscar 100, you can get close to your dish for alignment and tweeking without having to alter the cabling. 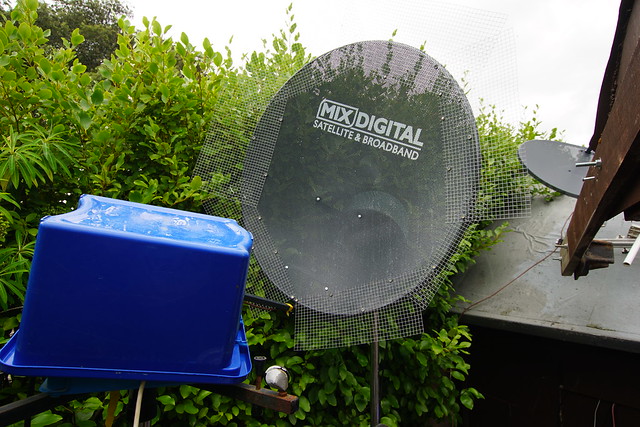 The blue plastic box is covering a smaller plastic box up the other way which has the linear and PSU in it. It keeps the water out (althogh I must put some drain holes in it just in case ) and the air still can cool the PA and fan. Not a permanent arrangement but it works!

Thank you all for the replies. Did a bit of experimenting last night and it appears there is a problem with the helix. I swapped to a patch feed and getting much bigger signal at 125k on the wideband monitor. I am waiting for a 110cm dish to arrive on thursday for receive with my green oslo lnb. Then i will mount the patch properly on the 1.2m offset dish. If I can I will keep the 20w amp + pluto amp and lime sdr in the shack now I know it is not a cable problem. Hoping to be on datv thursday evening once the rx dish arrives.
73s
Darren
73s
Darren G4VTQ
Top
Post Reply
7 posts • Page 1 of 1