Heath Robinson approach to get those few more dBs

Heath Robinson approach to get those few more dBs

So I get my dish lined up to receive Oscar 100 as per my 360 video ( https://www.youtube.com/watch?v=wv1Srw6F8Bs&t=1s if you have not seen it ) BUT then I get a poty.
I cannot get the RX signal to be as good.
The FIX was to a) use a pipe cutter to cut the LNB rather than a saw. b) Set the LNB holder further away from the dish by about 20mm using a new locating hole. The poty was 'waterproofed' using clingfilm and then some aluminium foil around the LNB to reflect the heat in the sun to help keep it cool. 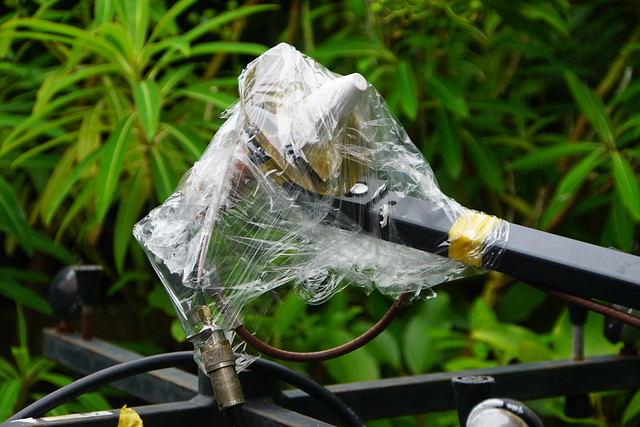 Just the clingfilm - aluminium foil added after this photo.

Now I had the reception working about the same as others I decided to try transmitting...

After lots of experimenting ( and still more needed ) I can now see my transmissions coming back.
Here is how I did it.
I have a similar setup mentioned in this link viewtopic.php?f=101&t=6174
BUT the computer driving the Lime Mini is near the dish so not so many drive amps. The final power amp is right next to the poty inside two plastic containers arranged to keep water out but let air flow.
BUT this arrangement would not let me transmit a low SR signal from the DATV EXPRESS software without TX Queue overflow. I found that the only SR that would work was 333 or more. The TX signal with my cheap 1.1M dish was not enough for me to lock to the returning signal.
SO HOW TO GET MORE TX SIGNAL?
Looking at the dish and thinking the TX signal is the low frequency and the dish is relatively 'flat' I thought I would try extending it.
First I ooked at the effect on the RX MER with a smallish piece of rabbit hutch mesh and saw a small increase in signal to my suprise!!!
Off I went to B&Q and bought two pieces of mesh and some washers. I cut the mesh into strips and used the washers and some screws to fix the mesh around the dish. 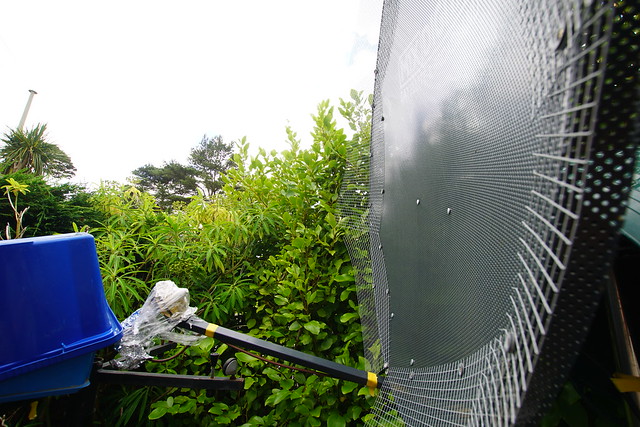 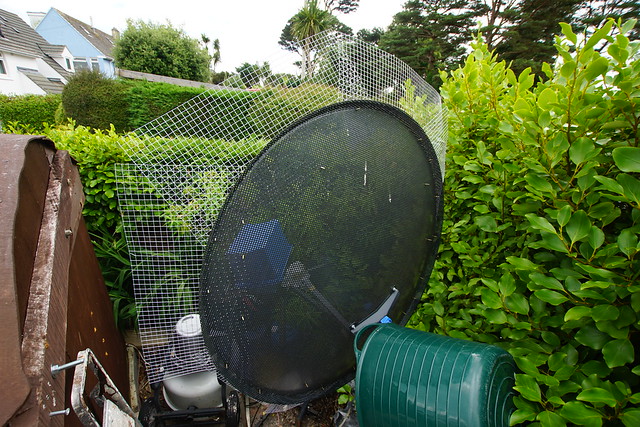 The green container is over the satellite positioner motor etc. The gap in the mesh bottom left is where the counter balance arm for the telescope observatory swings up!!!

The increase in transmitted signal was enough for me to receive my own pictures coming back. I would say it was several dBs extra.

The job on the dish took hardly any time as it was very easy to screw into the mesh dish but the result was a big suprise ( If not a work of art ).

With more time and a little more work this could be done using smaller 'petals' and make a better looking result but this dish is hidden away and it works!!

The production of the video signal is the next problem I will solve - but that will be another post...........
Top

The POTY feed over illuminates a standard satellite dish because of the longer f/D. If you extend a dish like this you lower the F/D and it is a better match to the feed and it has more gain. Win Win. The precision will not be sufficient for 10 GHz but 2.4 GHz is more forgiving.

In DATV express, you must disable audio in the codec menu for low bit rates. There is not enough bandwidth for 64kb/s audio and video at 125ks. You may also need a lower twiddle factor and a lower resolution, 320x240 for example would be a good start.

With an LNB on it's own (unmodified Octogon Green), I get about 7db MER on the WB beacon. With the POTY, i get about 1.9db. Needless to say, it doesn't even lock.

The LNB holder/arm design on my dish is such that the holder is quite low compared to others; I've pushed the POTY back as far as it's goes but of course hits the patches.

I'm waiting on a spare 100mm length of copper pipe to test to see if the POTY is too far forward on my dish, but I guess that it probably is. Given that my arm is a little more diagonal than yours, would extending my arm not make the POTY loose focus with the focus point of the dish? Curious to understand how this works.

That was similar to what happened when I put my LNB into the poty. I thought that the joint between the LNB and the poty might be a problem so next one I did I used a plumbing 22mm tube cutter to cut through the LNB waveguide. The type is one you clip over the tube and rotate to cut. This was much easier than I thought it would be. Using the 22mm to 22mm compression fitting with the olives cut through ( so they make a tighter joint but come undone if needed ) to fix the LNB to the poty and it was a much firmer fit. Then moving the poty and LNB further away helped in my case. The other thing that made a difference was the PTFE 'nose cap'. I used one from a previous LNB together with it's white plastic cover. They worked better than the PTFE cone that came with the poty kit. I tried using a plastic sandwich box for weather protection but found that the lid had a strange effect on the signal and then just used cling film temporarily and that worked very well!

Thanks for that tip. That has sorted out my low SR problems - turn the audio off!

Now I can sleep better at nights!!! but what do I do to get a low bit rate audio as well? Just wondered if you could point me towards a better encoder system for a Pluto or Lime. I will try my Portsdown sometime and see if I can get that running.

I'm just at a loss on how to move my POTY further back. If I extend my arm somehow, my POTY will be higher, as my arm is diagonal. I assume this would mean I would loose focus with the centre of the dish.

Can you bend the arm after extending it?
Top

Given the mesh size, I think it does not do anything on 10 GHz as the holes are too big. But as Mike said, it does work well on 13cm.
Top

It's not the forward/backwards issue...

I'm pretty sure it's my reflector patch pushing the pipe up (as it's hitting the dish arm), so the angel of my pipe is wrong.

How would one go about solving this? It's like I need to chop of my dish arm and have my POTY floating mid air

Bend the feed arm pipe down, make a new mount on top of it. Easy. I am not sure why there is a conceptual difficulty here? I don't have facilities at the moment to make a proper diagram. 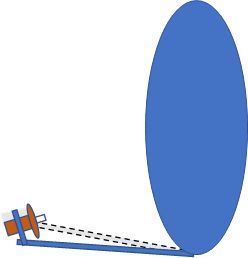