Here's the source code and .hex file for my DiSEqC controller article in CQ-TV250.
Do with it as you will, EOE.

Oops - uploaded the wrong file! Try this one for the code.

Suitably inspired, but not having a 12F629 to hand I have done the same for an Arduino. Now I just need to find a 8.94MHz crystal

This board: https://learn.adafruit.com/adafruit-si5 ... t/overview will do 8.94MHz quite cheaply (and with one of the two divider/multipliers an integer) and controllable from an arduino. They can be found on eBay and in some of the uk pi/arduino specialists

I also have an already converted unit. Hardware modified.

I found I had an old 9.025MHz crystal so I put that in in place of the 9.375MHz one. It doesn't really fit properly as the original is an SMT HC49. I soldered it to the side of the case and I now have an LO at 2311.20909 MHz which wasn't quite what I was expecting, it indicates the crystal is 3kHz high but it seems stable enough. The 90MHz change means I have about 14dB of gain at 146MHz. Only 1 dB less than at 437MHz. The gain drops rapidly below 140MHz which is probably a good thing, although it does mean it won't work in the new 4m segment.

The best solution is probably to use the DiSEqC control get hold of some replacement crystals. A 9MHz crystal from mouser costs about 50p and gives a 2304MHz LO. That will work with the sharp tuner for 146.5MHz. Anything less might not work with the VCO without mods. Changing the crystal isn't easy but not impossible. In retrospect, it might have been better to destroy it with cutters as that would make de-soldering less likely to damage the PCB tracks.

G0MJW has pointed out an inconsistency between the article and the C code around the specific hex bytes sent to switch the SUP. The code is correct, the sequence is E2 03 00 rather than F2 as described in the article. Hex E is the set of leading framing bits in the DiSEqC standard. Hat tip to Mike for eagle eyes, apologies to all for my irritating carelessness.

I ordered a PIC from CPC and it arrived yesterday. All programmed and working. Spent a while wondering how to decouple the 12V DC from the Upconverter supply, until I realised. I was wondering about F-type bias Ts and DC blocking. Not an issue for the USB tuner, but it is for my spectrum analyser.

That is a useful item, I've ordered one. I got a 20db attenuator on the input to the SUP quite warm while testing because I had forgotten about the 12v being passed up to the LNB!
73, Ron G7DOE
Ron G7DOE
Top

g0mjw wrote:Suitably inspired, but not having a 12F629 to hand I have done the same for an Arduino. Now I just need to find a 8.94MHz crystal

Hi Mike,
I was starting to develop some Arduino code for DiSEqC controlling of things (potentially a rotator) when I saw Ron's text on the DiSEqC control for the SUP2400. Pondering which bits I need to port over and enhance Noel pointed me to this post of yours. Would you be willing to share your Arduino sketch for me to build in the other codes, say develop switching of the SUP2400 in and out, doing something with the replies and then add in the bits for my goal for a positioner controller from the Arduino.

Many thanks in anticipation.

Works very well with MiniTioune, but I find it necessary to power cycle the board after starting the RX, maybe a longer delay before the code is sent would be better in this configuration.

EDIT
I have just tested six other SUP2400s and they all work perfectly, no need to reset. The first one I used is just slow to start.
Typical I would pick that one first! 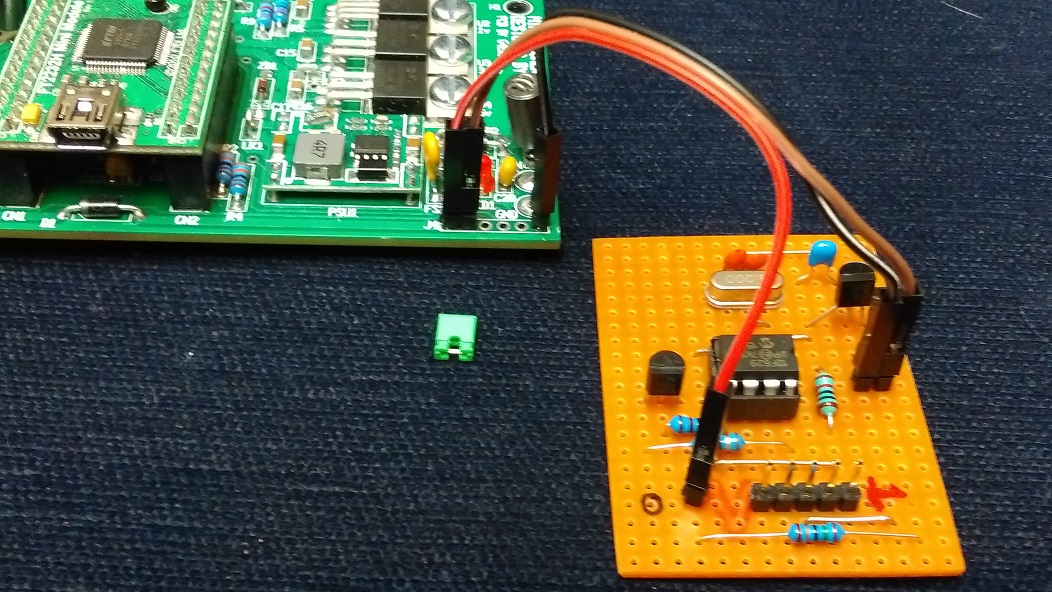 Return to “CQ-TV, The BATC Magazine”